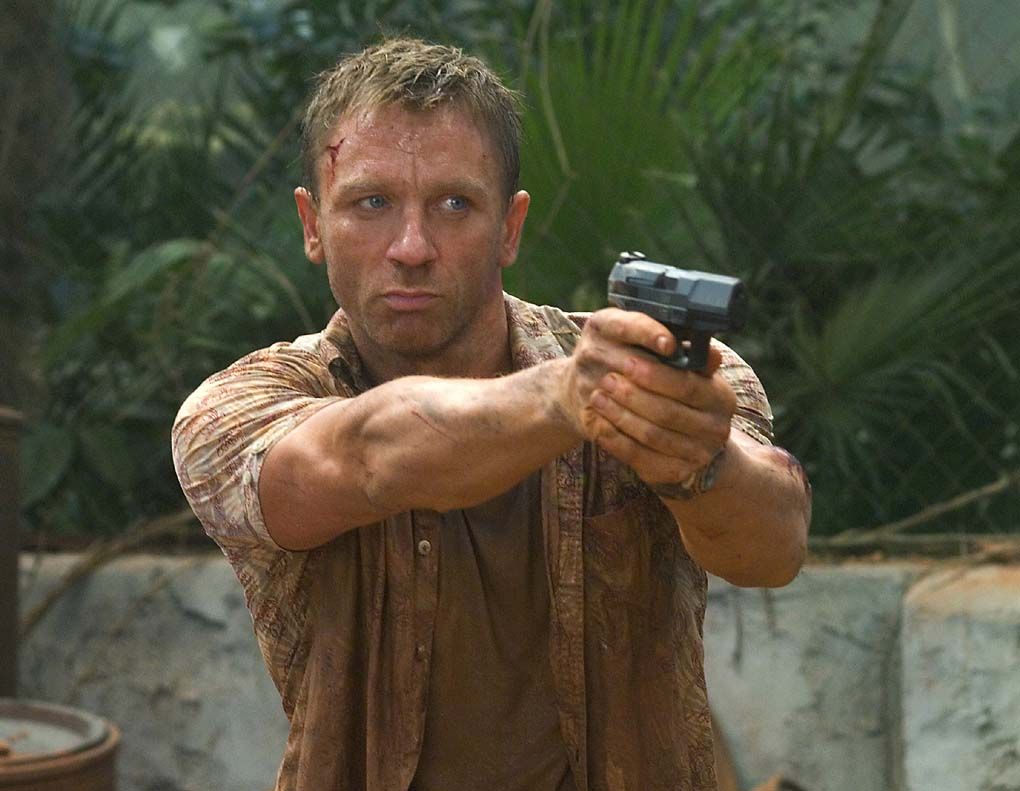 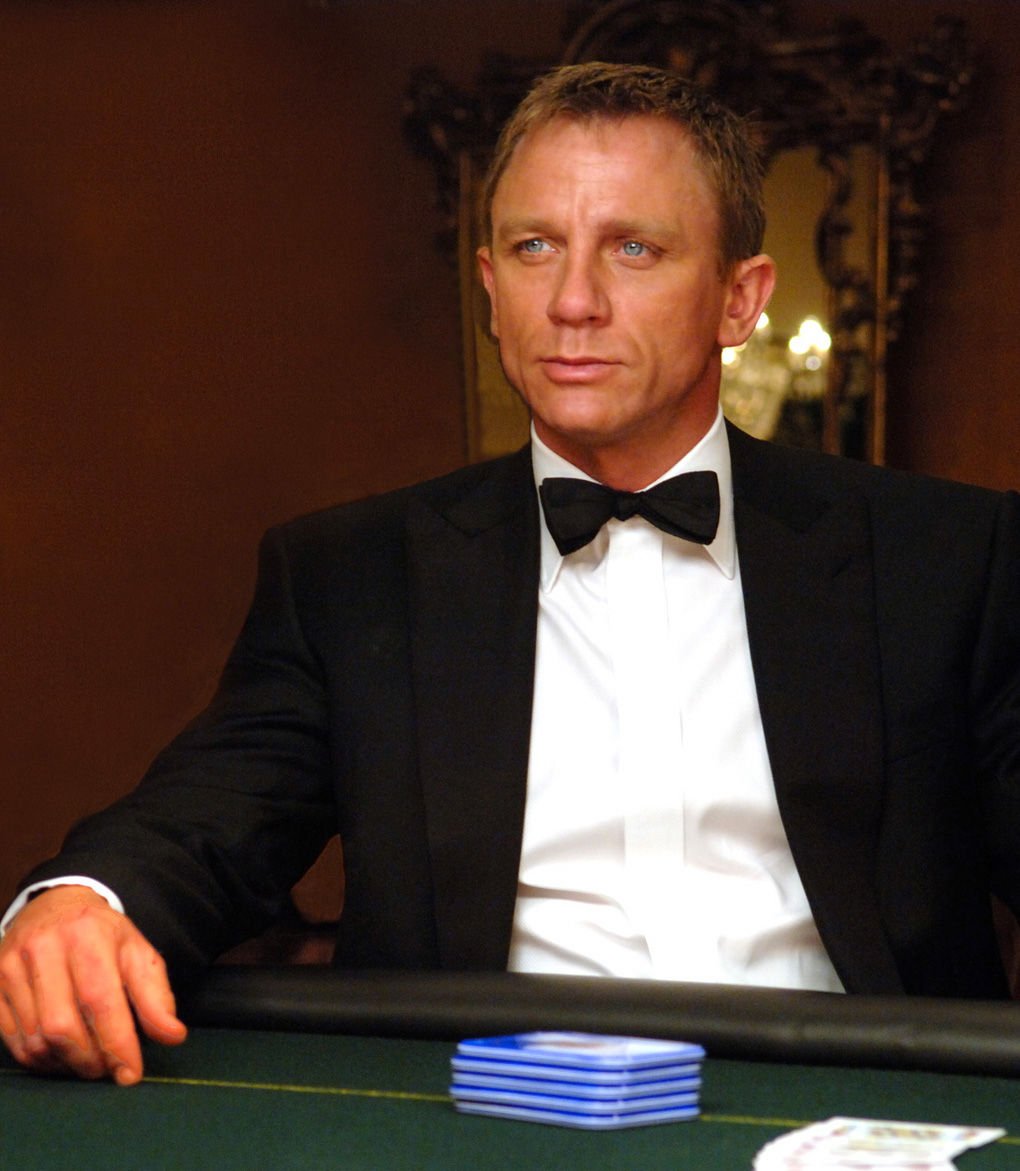 In this file photo provided by Sony, Daniel Craig stars as agent 007 James Bond in "Casino Royale." Craig becomes the first fair-haired 007 and he is also more rugged than suave, and not as perfect looking as fans of the 44-year-old movie series have come to expect.

In this file photo provided by Sony, Daniel Craig stars as agent 007 James Bond in "Casino Royale." Craig becomes the first fair-haired 007 and he is also more rugged than suave, and not as perfect looking as fans of the 44-year-old movie series have come to expect.

LOS ANGELES — “Christ, I miss the Cold War,” Judi Dench’s spymaster M mutters at the beginning of “Casino Royale,” the 21st James Bond picture and the most raw, intense film of the franchise. Just as the superspy was created as a product of his times and thrived at the height of U.S.-Soviet tensions, so too is the latest Bond in the series. In his debut in the iconic role, Daniel Craig functions as a post-9/11 007, the enemies being terrorists from throughout the world. Dastardly commands are given by cell phone text message, one of which involves blowing up a plane. And the ultimate showdown between Bond and the biggest bad guy of all, a crafty financier who invests terrorists’ money, takes place at a multimillion-dollar Texas hold-’em poker match — like something you’d see over and over on ESPN. The foes may sound vastly different from the ones Sean Connery fought in 1962’s “Dr. No,” when moviegoers first met the sexy secret agent of Fleming’s novels. (Though “Casino Royale” is a prequel that introduces us to the character as he receives his double-0 status, orders his first martini and drives his first Aston Martin, it takes place now.) But even from the beginning of the series, Bond never battled traditional enemies of the West “but rogue, aberrant, maverick villains who don’t represent communist governments, but often seek in their own way to make the Cold War worse for both sides,” said Stephen J. Whitfield, author of “The Culture of the Cold War.” “Even though Bond is a Cold War hero, he transcends the official conflict by dealing with villains who are even more salacious or devious than the KGB or communist China,” said Whitfield, a professor of American studies at Brandeis University. “In my take of the films — the earlier films, the films that Sean Connery starred in — what they’re really trying to say is, they tend to make the actual communist adversaries seem less hostile and less dangerous.” In 1963’s “From Russia With Love,” for example, Lotte Lenya’s character is a former KGB agent who has broken off on her own, which makes the KGB seem less menacing by comparison. “Osama bin Laden, he is the realization of what Ian Fleming had imagined of the billionaire who is both a crackpot and truly dangerous in the scale of his ambitions of violence,” he said. Glenn Yeffeth, editor of the essay collection “James Bond in the 21st Century: Why We Still Need 007,” said the enemies during Connery’s years tended to be ruthless supervillains. Under Roger Moore’s subsequent tenure, the bad guys grew sillier and had ridiculous plans to kill everyone on the planet, as in 1979’s “Moonraker.” During the more recent Pierce Brosnan movies, they fell somewhere in the middle. Yeffeth argues that villains and themes changed with each actor playing Bond not necessarily because of anything happening politically but rather to reflect shifts in the cultural landscape. “If you look at Sean Connery, the original James Bond, he was completely ruthless. He was misogynistic, he was almost sociopathic. He was happy to throw a woman into the path of a speeding bullet, he was happy to kill, he had the license to kill,” he said. “The context was the Cold War and the stakes were very high but James Bond was always about internal morality.” “If you look at how he evolved moving into the feminist movement of the ’70s, the producers decided he was too intense, too serious. We can be heartless but you have to have a smile on your face, and that was Roger Moore,” he continued. “Roger Moore could also be fairly misogynistic, he could also be heartless, but he was tongue in cheek.” But the next Bond, Brosnan, was just right because “he was a little more serious than Roger Moore, but what was different with Pierce Brosnan was that he was not a misogynist anymore. Women were taken seriously in those movies.” Yeffeth pointed to Michelle Yeoh in “Tomorrow Never Dies” (1997) and Halle Berry in “Die Another Day” (2002) as examples in which the women were Bond’s equals, or close. The sixth and latest Bond, Craig, has met his intellectual match in French actress Eva Green as the smart, stunningly beautiful Treasury official who arranges the money for his “Casino Royale” poker match. She’s no Bond girl strutting around poolside in a bikini, and while she does fall for him (and he for her, in a rare, early example of the spy being consumed by his emotions) it takes awhile. Regardless of who’s playing Bond, some things have remained constants — the elaborate sets and fashionable costumes, the lavish, jet-set lifestyle and the aura of sexuality, said longtime documentary maker Laurent Bouzereau, author of “The Art of Bond.” Throughout the changing faces of Bond, Bouzereau believes the actor that’s your favorite is the one you saw first.