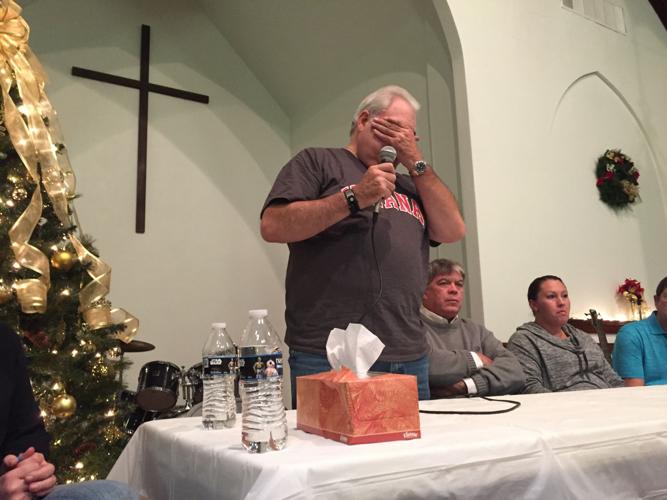 Overcome: Mike Whiteman wipes away tears while speaking about his son, Brett, who died of a drug overdose in October, during the Addiction Impact Panel held Dec. 8, 2015, at Grace Fellowship Church. 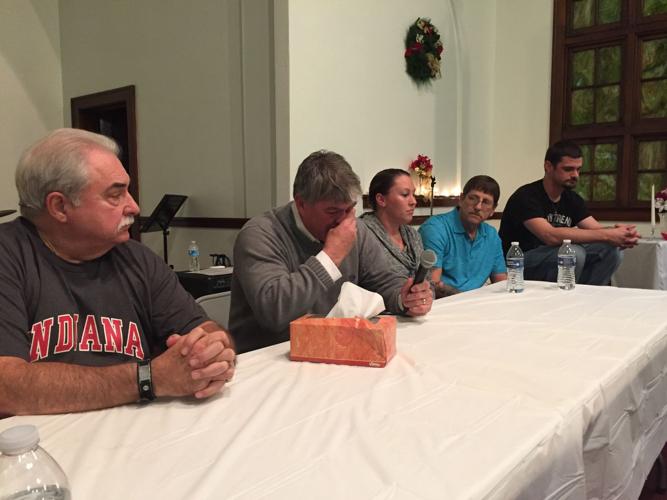 Emotional: Al Sparlin takes a moment to compose himself while talking about his late son, Chad, during the Addiction Impact Panel on Dec. 8, 2015. 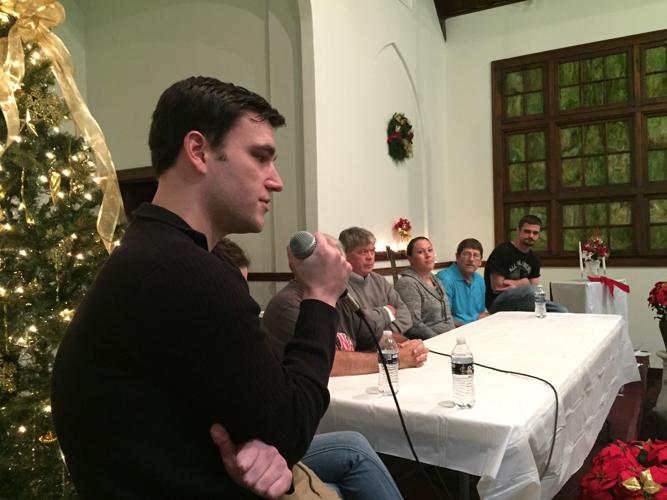 Road to Recovery: Cory Herr speaks to the crowd Tuesday night about his struggles with addiction during the Addiction Impact Panel at Grace Fellowship Church.

Overcome: Mike Whiteman wipes away tears while speaking about his son, Brett, who died of a drug overdose in October, during the Addiction Impact Panel held Dec. 8, 2015, at Grace Fellowship Church.

Emotional: Al Sparlin takes a moment to compose himself while talking about his late son, Chad, during the Addiction Impact Panel on Dec. 8, 2015.

Road to Recovery: Cory Herr speaks to the crowd Tuesday night about his struggles with addiction during the Addiction Impact Panel at Grace Fellowship Church.

Chuck McCoskey keeps a chart posted on a bulletin board on the wall of his office in the basement of the Howard County courthouse.

The assistant chief of probation wants to keep for himself, and those serving probation, a sobering reminder of what the continued abuse of drugs and alcohol can do to an individual.

“Over the last four years I’ve posted every alcohol and drug related death in Howard County,” McCoskey said. “They’re in front of me every day. This year, we have 38 confirmed drug-and-alcohol related deaths in Kokomo. That’s what motivates us.”

But, the effects of addiction stretch far beyond the damage being done to the individual abusing the drugs and alcohol. There are mothers, fathers, siblings, spouses, and most importantly, children, who also share in the anguish of watching their loved one wither away due to the prolonged use of substances like methamphetamine, heroin and alcohol.

The probation officers recently started holding a victims' panel to help those coming to grips with having an addicted loved one, giving them an avenue and support system as they sort through their feelings.

One of McCoskey’s probationers suggested the office start a similar panel for the addicts, and the probation office was listening. Tuesday night, Grace Fellowship Church hosted the first addiction impact panel, where recovering addicts shared their stories, and also heard gut-wrenching tales from parents who have recently lost children to drug overdoses.

Judge William Menges was one of those in attendance Tuesday night to get a feel for what the recovering addicts and those who have lost loved ones to drugs had to say. He says help is on the way.

“We’ve made huge progress on potentially establishing a long-term in-patient treatment facility,” Menges said. “We have several pieces that still have to fall into place for that. But, I have every reason to believe that we will. And we should have a long-term treatment facility in place sometime in 2016.”

But for parents like Mike Whiteman and Al Sparlin, that treatment facility didn’t come soon enough. Their sons – friends Brett Whiteman and Chad Sparlin, died within three days of each other in early October.

They shared their stories with the recovering addicts and patrons in attendance.

Brett Whiteman was 32 years old when he died Oct. 1. Mike explained his son had been involved with drugs since he was 16, hanging out at the baseball diamond with his older friends.

Brett was a member of the Junior High National Honor Society, but by the time he was a sophomore in high school, drugs had taken such a hold on him that he was kicked out of school.

“He had a big heart; he really did,” Mike said. “But, he lived with me because everyone in the family had turned their back on him except for me. Even on Wednesday mornings when he didn’t stay at my house, God knows where he was at.”

Mike went over to the Super 8 Motel, where coroner Jay Price, a close friend of Mike’s, confirmed Mike’s worst nightmare.

“[Brett] thought he was an amateur pharmacist,” Mike said. “But, no matter how much you think you know, you don’t what’s going in your arm. You just trust in somebody that’s a lowlife that’s giving you this stuff. You put it in your arm. What is it? You don’t know.”

Brett thought he was shooting up heroin, but it was a lethal concoction of heroin laced with Fentanyl, a powerful, medical-grade painkiller. Anti-anxiety drug Xanax and vodka were also in his system.

Brett had been sober for 10 months this time, a recurring theme as he tried to beat his drug demons. Mike said part of the reason his son could not get any true help has to do with the fact there aren’t enough facilities in Kokomo dedicated to drug rehab. Two weeks after Brett died, Mike got a call from a facility in Lafayette to let him know they had a room for Brett. It was too late.

Mike urged Menges to continue the fight to make those places available in the city.

Al Sparlin followed with a story about his son's last day. Chad’s final fix was a mix of heroin and the prescription opioid painkiller hydrocodone. He was found dead in the break room at work on Oct. 4. He was 33.

“We had eaten lunch with him on Sunday, and six hours later, he was dead,” Al said. “Unbelievable.”

Chad got in trouble as a kid for drinking and driving and had his driver’s license suspended. He got all that legal trouble cleared up, but soon thereafter, started getting into harder drugs.

Chad had been out of rehab for just a month when he took that fatal dose of opiate drugs.

“You could tell that first week out of rehab that Chad was just a different person,” Al said. “He was doing follow-up treatments in Indianapolis for a couple weeks. Within two weeks of that, he was back out doing the same stuff he was doing before. It’s just amazing what you can see in their face and eyes when they are off of it. They’re a different person. But, when he was at it, you could tell he was right back to his old ways.

“It’s unbelievable the emotion you go through,” he added. “In the last two months, it’s become easier to talk about. I do this daily for a minute or two, and it seems like I can do it OK. I once asked my son what prompted him to these things. ‘What part of your life was so miserable that made you want to do this?’ There was never an answer. No one could ever tell me why.”

After taking in the testimony of the parents who lost children to drug abuse, Menges seemed moved by what he’d heard.

“We have to do something,” Menges said. “The death rate from overdoses is simply unacceptable. I don’t know what the current numbers are, but late this summer, we had more people die of overdoses in Howard County than we had United States soldiers and allies die in Afghanistan from both hostile and non-hostile activities. And, that’s simply not acceptable.”

McCoskey, probation chief Dustin Delong and other members of the drug task force deemed the first addiction impact panel such a success that it will now be a regularly-occurring event, taking place the second Tuesday of every month, beginning Feb. 9, 2016.

Angela Coble knew she had an addiction problem, but she couldn’t seem to get the help she needed.

Angela Coble knew she had an addiction problem, but she couldn’t seem to get the help she needed.

Take Back Our Streets takes stand against addiction, mental illness

Mike Whiteman said addiction kills. He would know. It killed his son.