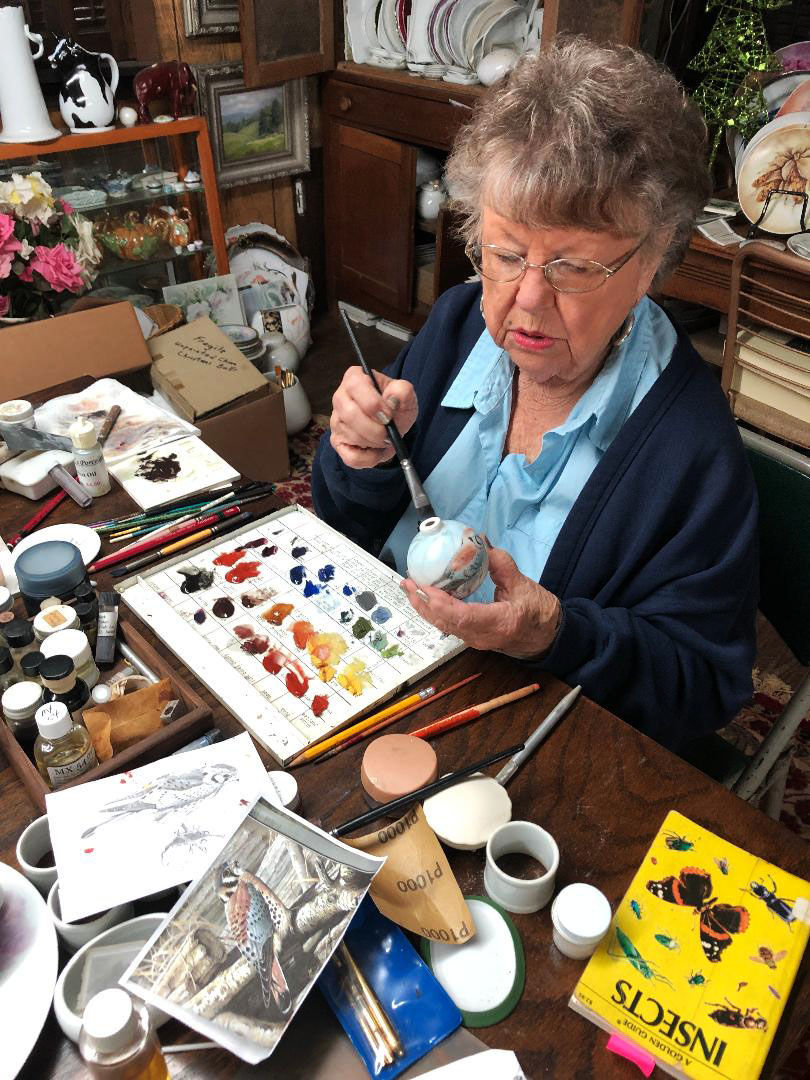 Bertie David paints a coffee set that was commissioned by the governor to be placed in the captain’s quarters on the USS Indianapolis. 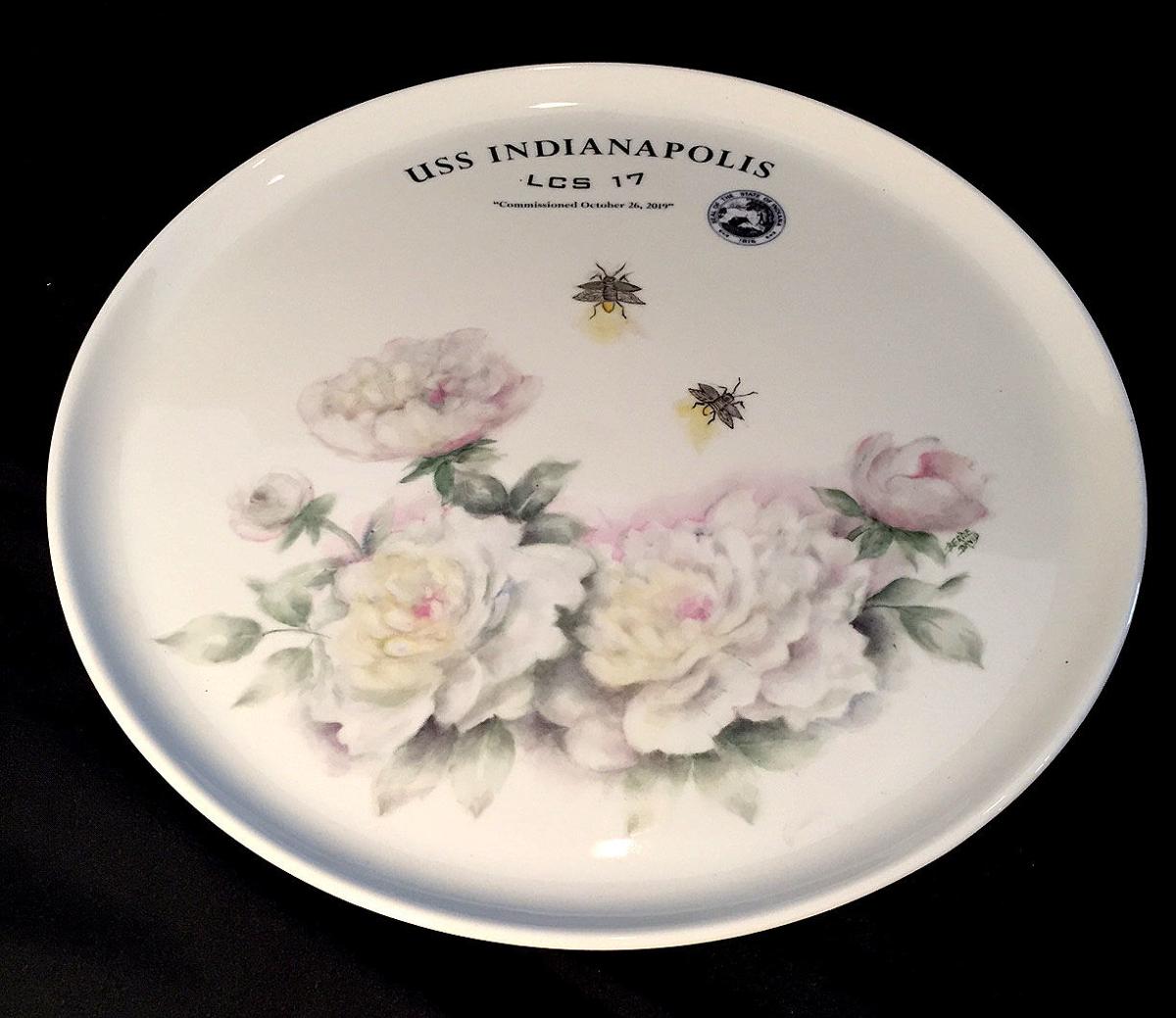 Bertie David painted this coffee set for the captain’s quarters on the USS Indianapolis. Provided photos 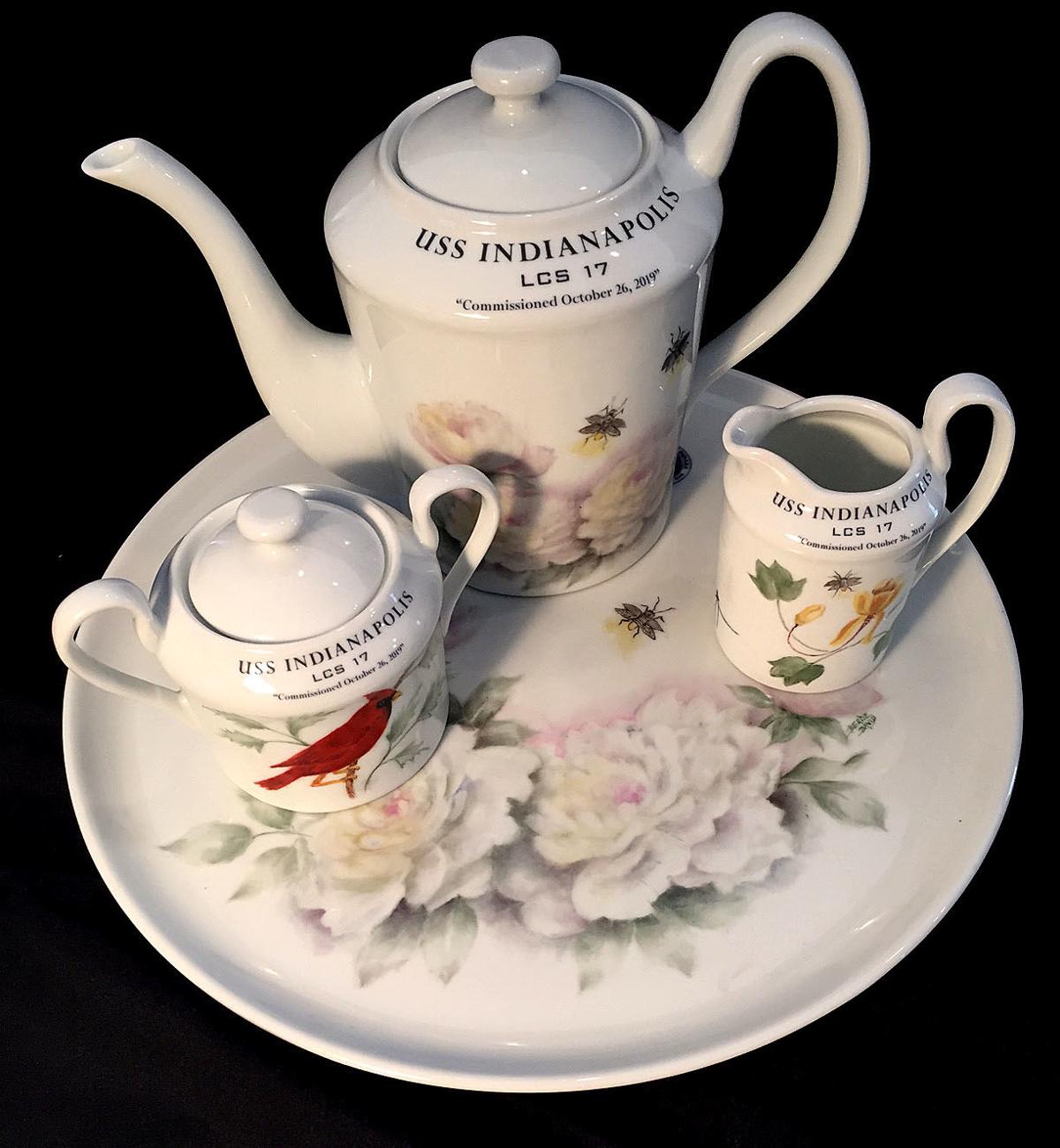 The coffee set painted by Bertie David includes the state flower, the peony; the state tree, the tulip poplar; the state bird, the cardinal; the newly designated state insect, the Say’s firefly; and the state seal. 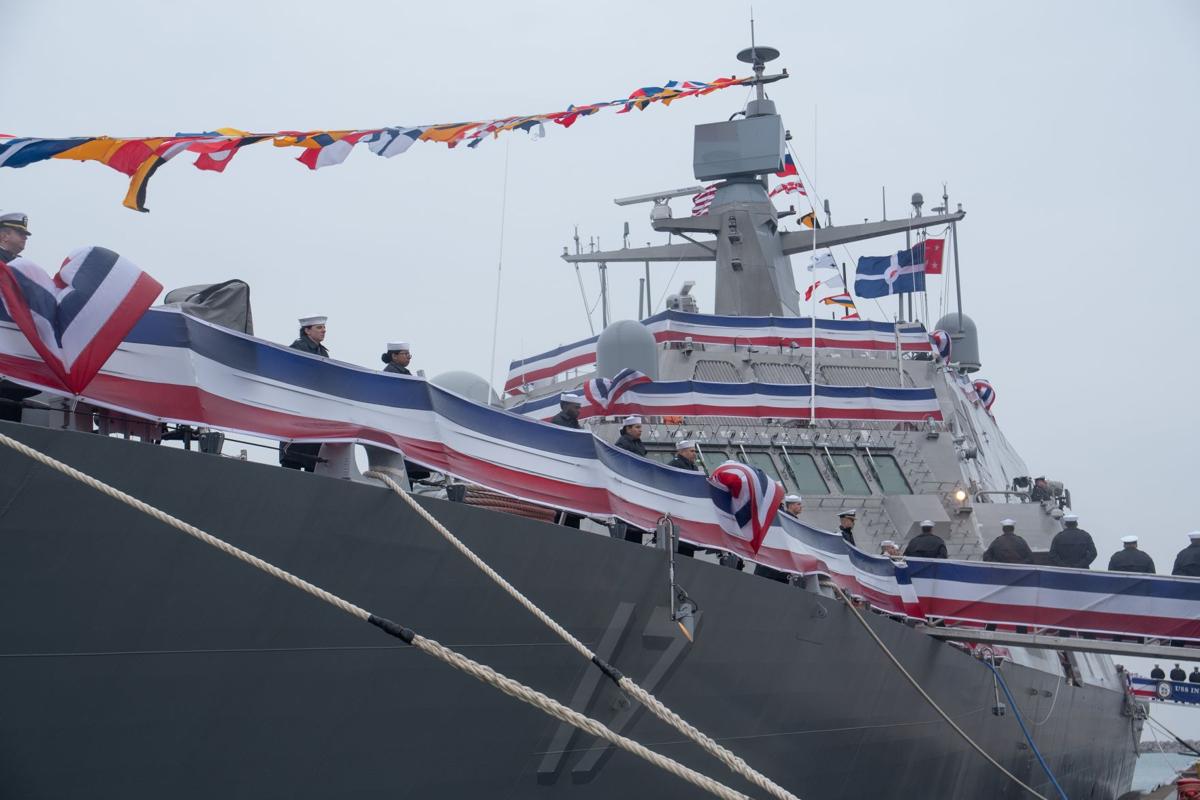 Kokomo native Bertie David isn’t a stranger to having her artwork on display in some very high-profile locations.

One of her hand-painted plates is in Washington, D.C., inside the residence of Vice President Mike Pence. David was commissioned to do the piece as a national project in which artists painted flowers from around the U.S.

There’s also a plate inside the Indiana Governor’s Residence that she painted during the administration of Gov. Frank O’Bannon, who asked the Indiana World Organization of China Painters to create a dinner set featuring Indiana wildflowers.

But David just finished a piece that ended up in one of the most unique places she’s seen yet.

In October, a porcelain coffee set David painted was placed inside the captain’s quarters of the USS Indianapolis, the Navy’s newest littoral [referring to “close to the shore”] combat ship that is being deployed on military missions all over the world.

The set was placed inside the vessel during its commissioning ceremony on Lake Michigan on Oct. 26 – which also happened to be David’s 87th birthday.

“I guess that was a pretty nice present,” she said.

David painted the coffee set, but the idea for the design came from working closely with Indiana First Lady Janet Holcomb.

Holcomb was familiar with the painted dinner collection donated to the Governor’s Residence by the Indiana World Organization of China Painters during the O’Bannon administration, so she reached out to that group again when she decided to commission a one-of-a-kind piece for the warship.

David just happens to be the president of the China painters group, and so the task was given to her to paint a coffee set that was worthy of being in the captain’s quarters.

David said she drove down to Indianapolis and had a one-on-one meeting with Holcomb to discuss the design. They ended up deciding to include a tray, coffee pot, sugar and creamer holders, and adorn them with the symbolism of Indiana.

That included paintings of the state flower, the peony; the state tree, the tulip poplar; the state bird, the cardinal; the newly designated state insect, the Say’s firefly; and the state seal.

“(Holcomb) had a little sketch of what she wanted, so it seemed like she was pretty artistic,” David said. “She was very pleasant to work with.”

David worked on different styles and layouts for the set, and then would email pictures to Holcomb to get the OK on the design. But by the time it was nailed down, it was crunch time.

David ended up having just two weeks to finish the project, so she set to work inside her art studio located at her house. For 14 days, she poured over the paintings from 6 p.m. to midnight to ensure she was done before the commissioning of the ship. Between each painting, David fired the pieces inside the kiln at her studio.

But after two weeks of intense, focused creativity, David had the coffee set painted and fired just in time.

“I thought it looked very nice, and it turned out better than I thought because I thought I wouldn’t have enough time,” she said. “But it worked out. I guess I work well under pressure.”

David said she dropped off the coffee set in Indianapolis, but wasn’t able to attend the commissioning ceremony in Burns Harbor, Indiana. More than 8,000 people ended up attending the ceremony, including Indiana residents and friends and family of the USS Indianapolis’ crew.

Now, David’s hand-painted coffee set is safe and sound in the captain’s quarters, where it will be permanently housed and used during dinner parties or other special occasions.

But for David, the set is just one of many unique pieces she’s created during her long career as a painter, teacher and art curator.

She graduated from Kokomo High School in 1950 and ended up attending the prestigious John Herron Art Institute in Indianapolis, where she studied with some of the best instructors in the state.

That education put her on the path to become a multi-faceted talent in the world of fine porcelain painting, classic oil painting and art restoration.

For years now, David has been a member of the International Porcelain Artists Teachers Association. She was also a past president of the Kokomo Art Association, which she has been intimately involved in over the past 40 years.

But in all that time, David said, there’s been nothing quite like painting a coffee set for a Navy combat ship.

“It worked out pretty well,” she said.