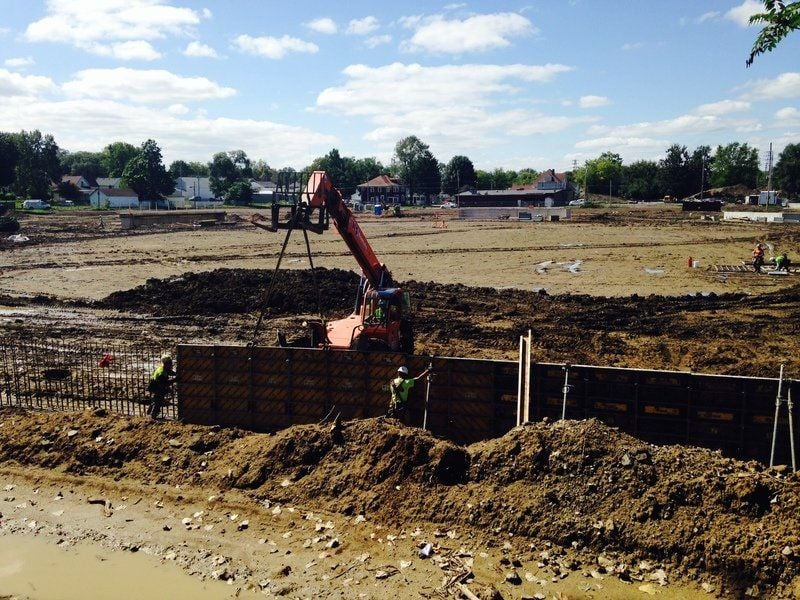 Josh Sigler | Kokomo TribuneConstruction is under way: Workers install part of the outfield wall at Kokomo Municipal Stadium on Sept. 16. Mayor Greg Goodnight says construction on the baseball stadium is slated to be finish by April of 2015. 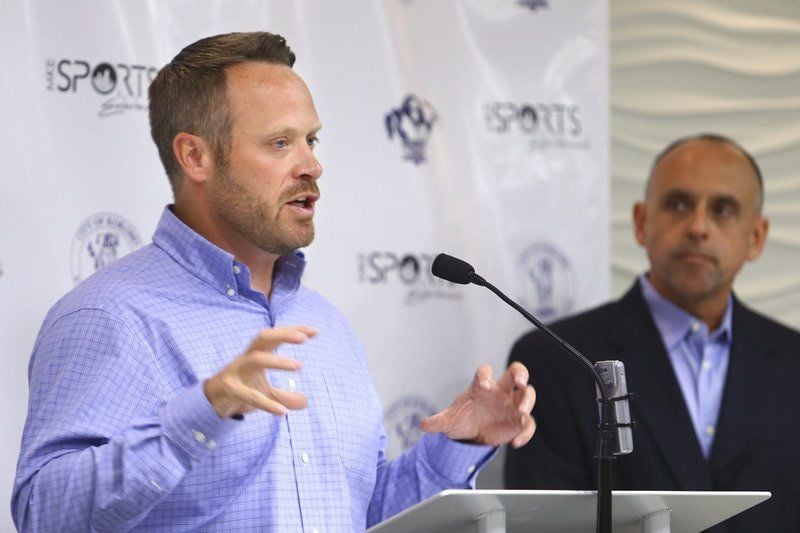 Tim Bath | Kokomo TribuneOwner: MKE Sports and Entertainment Mike Zimmerman talks about the decision to bring a Prospect League team to Kokomo during a joint announcement with the city of Kokomo on Sept. 2. Looking on is Kokomo Mayor Greg Goodnight.

Josh Sigler | Kokomo TribuneConstruction is under way: Workers install part of the outfield wall at Kokomo Municipal Stadium on Sept. 16. Mayor Greg Goodnight says construction on the baseball stadium is slated to be finish by April of 2015.

Tim Bath | Kokomo TribuneOwner: MKE Sports and Entertainment Mike Zimmerman talks about the decision to bring a Prospect League team to Kokomo during a joint announcement with the city of Kokomo on Sept. 2. Looking on is Kokomo Mayor Greg Goodnight.

The 1989 film Field of Dreams made the old adage “If you build it, he will come” famous, but the city of Kokomo put it to real life use on a wing and a prayer.

In early May, Mayor Greg Goodnight announced the city’s plans to build an $11.5-million baseball stadium and flood mitigation project in downtown, with the Kokomo Common Council approving $10.5 million in bonds for the project soon thereafter, to be paid back over 15 years at 2.5 percent interest to Huntington Bank.

“Your best redevelopment project in any community is taking your blighted area and repurposing it for productive uses,” Goodnight said. “It’s no different than the concept Indianapolis used with Lucas Oil Stadium, or just about any redevelopment project in the country. That’s what I’m excited about, taking that area that had not had much investment made in it in decades and putting some of our community assets in that location.”

When ground was broken on Kokomo Municipal Stadium in July, there were no solid agreements on who exactly would use the stadium once it’s ready in April of 2015.

That all changed on Sept.2 when Goodnight announced MKE Sports and Entertainment CEO Mike Zimmerman had reached an agreement with the city to bring a Prospect League team to Kokomo, adding a 12th team to the league which already boasts squads in places like Richmond and Terre Haute.

“’[This] announcement is about bringing family entertainment into the heart of our city and creating pedestrian activity in the afternoon and evening around Kokomo Municipal Stadium,” Goodnight said. “The bottom line is before the first pitch, Kokomo has scored a big win."

Along with the new stadium, the city will invest over $100,000 into renovating CFD Investments Stadium in Highland Park, which will now be used by Kokomo’s Babe Ruth League. The Babe Ruth League used to play in Huston Park, but there are plans to overhaul those fields, as well. Although nothing is set in stone yet, Huston Park will likely become a practice field with just a backstop, and have its concessions and other buildings removed, Goodnight said. The park portion closest to Webster Street, which includes the playground and picnic areas, will remain intact.

“We’ve always had two stadiums that the city maintained in Huston Park and CFD Stadium,” Goodnight said. “Now we have Kokomo Municipal Stadium and CFD Stadium. By doing this and having somebody rent the stadium, our actual maintenance costs annually are going to go down because instead of maintaining those two fields, now we still have to maintain the lights and water and things at CFD Stadium, but we’ve replaced the expenses of Huston Park and it’s been picked up by MKE Sports.”

Choosing the team’s name and logo will be a community effort. There is a team naming contest, with the winning suggestion receiving $2,500 cash, game tickets and prizes. Entries for team name, logo and team colors may be submitted online at www.kokomobaseball.com. A winner will be announced in December.

“We want to work with the community to come up with the best name, look and feel for the team,” Zimmerman said.

The tipping point that landed Kokomo at the top for Zimmerman’s Prospect League expansion came in late June, when he toured the city, visiting places such as Memorial Gym before taking in the championship game of the David A. Kasey Memorial Youth Baseball Tournament at Northside’s Carl Hughes Jr. Memorial Field.

The number of people in attendance for that game between H.P. McPike and Hollingsworth Lumber, a youth baseball contest, led Zimmerman to believe the interest in the level of play in an organization such as the Prospect League could be similar, if not greater.

“So that got me really excited, but there’s more to the story here,” Zimmerman said. “The revitalization project that Kokomo is doing is real special, and I want to be part of that. Plus, this idea of urban baseball is a newer trend in baseball. So for me, it was a perfect storm, because I’m an entrepreneur at the heart. For me, it wasn’t just about baseball. It’s about building life into businesses. So for me, Kokomo was was an ability to get involved in the community in yes, baseball, but also a lot of other things.”

Zimmerman, a Milwaukee businessman who also owns an indoor professional soccer team and is the CEO of the Rockford Aviators Fronter League baseball team, plans to incorporate local vendors into the concessions aspect of the new stadium for his team’s 30 home games, giving the menu at the ballpark a local flair. Just like he has in his other ventures, Zimmerman also hopes to incorporate entertainment events at the stadium to utilize the grounds when baseball isn’t being played.

“This isn’t about my team, this is the community’s team,” Zimmerman said. “So, I think the more you can make it community-centric the better. What we have to figure out is what is going to work well for this market. It depends on the community and what type of entertainment they like.”