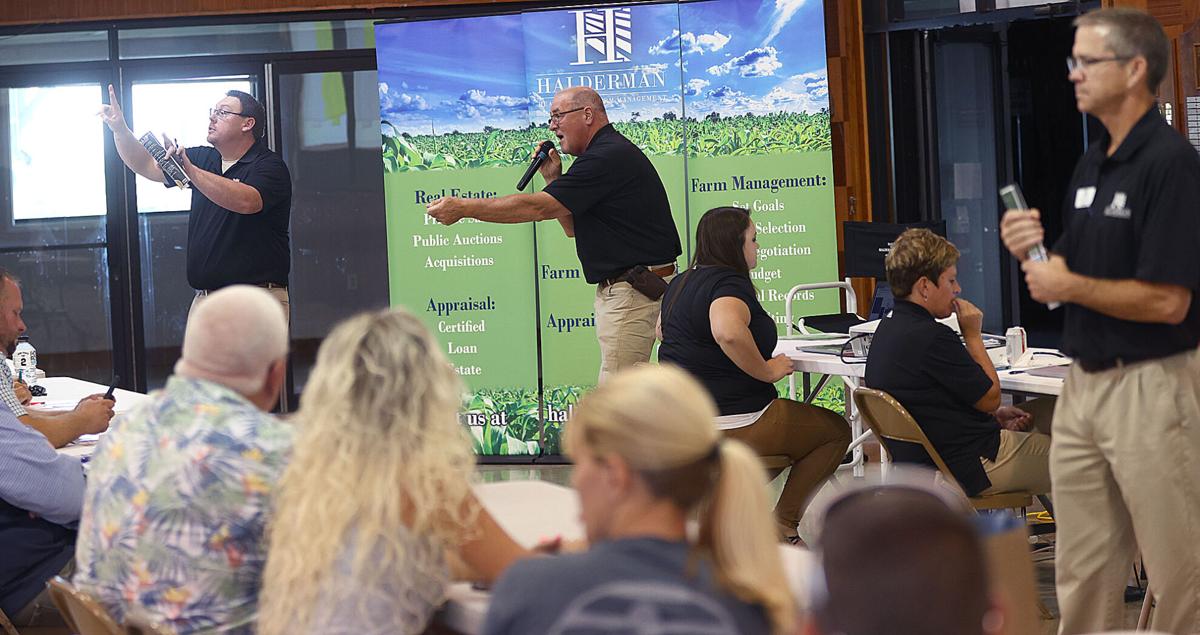 The Grishaw farm went on the auction block, with the high bid coming in at $8.9 million for the 615-acre Tipton County farm Monday evening at the Tipton County Fairgrounds. Rusty Harmeyer, from Halderman Real Estate & Farm Management, conducted the auction. 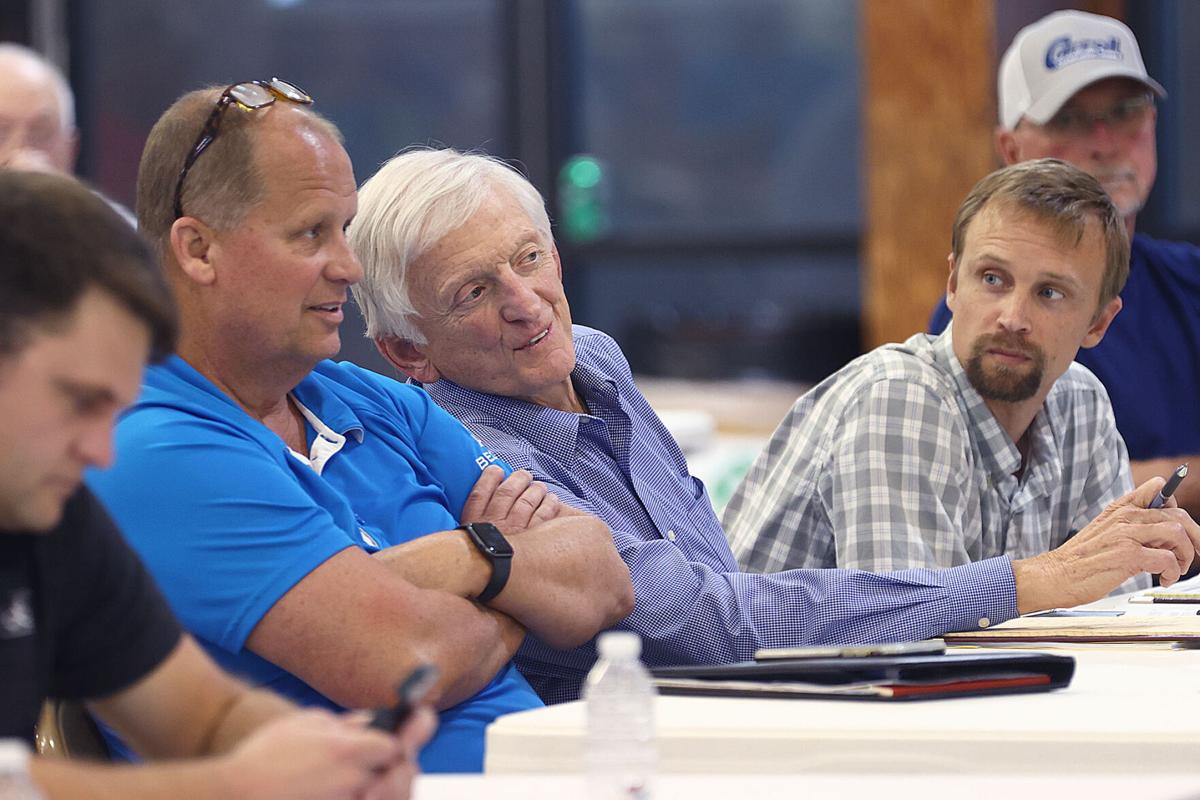 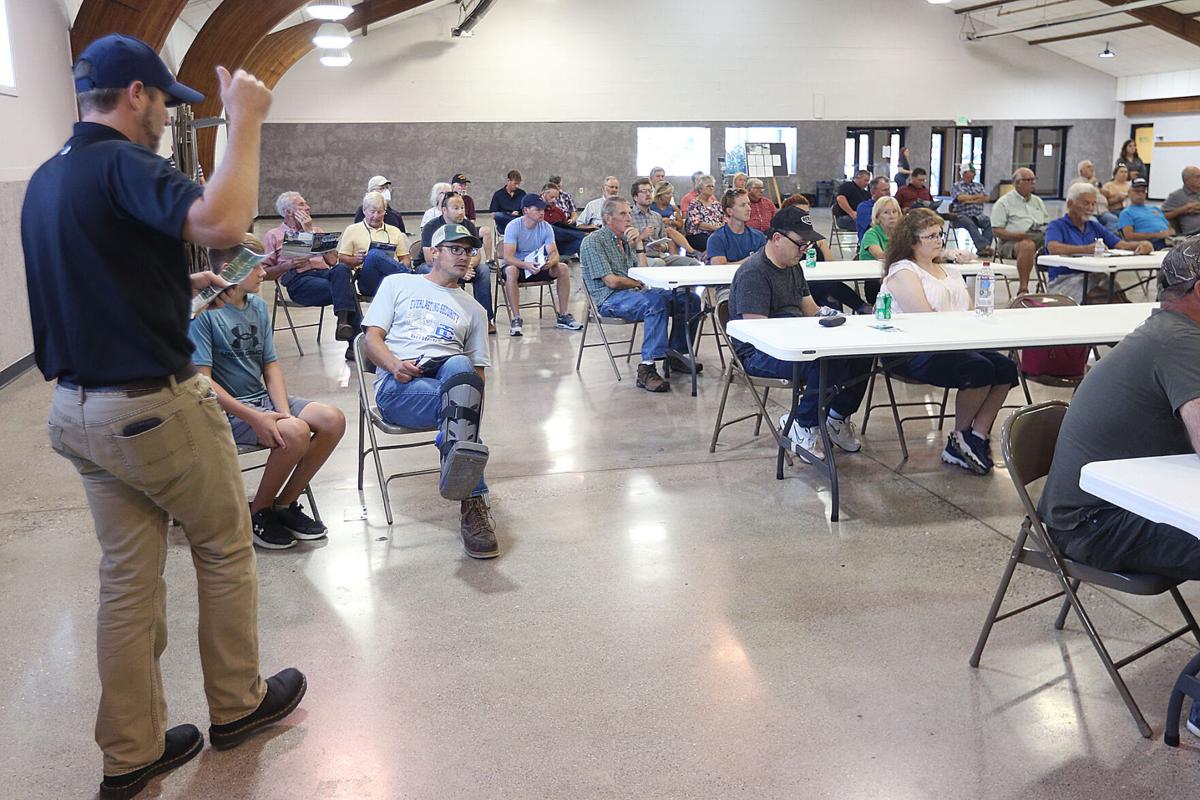 The Grishaw farm went on the auction block, with the high bid coming in at $8.9 million for the 615-acre Tipton County farm Monday evening at the Tipton County Fairgrounds. Rusty Harmeyer, from Halderman Real Estate & Farm Management, conducted the auction.

TIPTON — It was the battle of the seed companies.

The auction was for the chance to buy the Grishaw farm just north of Tipton. The spoils? Over 615 acres of property that included 557 acres of prime farm ground with some of the best growing soil in the county.

After an hour of exchanging bids Monday evening at the Tipton County Fairgrounds, an auctioneer looked at Campbell, who shook his head no. He was finished bidding.

“A guy told me several years ago that you never pay too much for a piece of land, but you might have paid it too early,” Beck said after the auction.

Beck and Campbell shook hands after the bidding ended. Both said they had no hard feelings.

Still, Campbell said, he wished he’d won, but not at that price tag.

“It’s an extremely high price for good farmland, but I’ve been driving past it my whole life and it’s a good farm,” he said. “I would have liked to have had it, but there’s a stopping point.”

In reality, Beck’s, based in Atlanta, Indiana, had just paid nearly $4,700 more per acre than the average going price for top-quality farm ground in the state. That’s on top of the fact that this year has some of the best land prices on record.

According to Purdue’s Farmland Value and Cash Rents Survey published in June, data suggests farmland prices across Indiana have risen to all-time highs. The previous records for farm land values were set in 2014, when corn and soybean prices skyrocketed.

In west central Indiana, which includes Tipton and Howard counties, the average top quality farmland price sat at $10,195 in June, which is the second-highest rate of any region in the state. Southwest Indiana had the highest average price of $11,696.

Todd Kuethe, an associate professor at Purdue who authored the survey, said a unique and rare combination of 10 economic forces all played a role in this year’s price spike. Those factors include net farm income, expected income growth, crop and livestock prices, interest rates, exports, inflation and U.S. policy.

“Normally we’ll see positive price pressure from one or two market forces,” Kuethe said. “However, this June, survey respondents indicated that all 10 forces we asked them about were putting upward pressure on land values.”

And that pressure was on full display Monday at the auction in Tipton.

Pat Karst, vice president of Halderman Real Estate Services, which ran the auction, said the $8.9 million price tag on the 615-acre farm was around 30% to 40% higher than what it would likely have brought last year.

That’s due to increasing land values, but it also didn’t hurt that two major local players in the seed industry were both adamantly going after the property, he said.

“It’s a strong area and it’s a good farm with a good reputation,” Karst said. “The previous owners took care of it and it shows.”

Tom Hooper, director of business at Beck’s, which owns facilities all over the Midwest, said that although it was a steep price to pay, owning the land will be worth it in the long run and cheaper than renting farm ground.

After all, the company grows and distributes seed, and you’ve got to have land to grow it on, he said.

“Today, money in the bank doesn’t have a high rate of return, and the rate here, even at these prices, will provide a pretty nice return versus a cash rental,” he said.

But what really makes the property rare, Hooper said, is the fact that nearly all the farm acreage is contiguous and not separated by other fields.

That’s huge for a seed company, he said, since growing on smaller parcels makes their seeds more susceptible to cross-pollination from other fields. Planting on larger tracts means better seed quality.

And those kinds of ideal parcels hardly ever come up for sale in the area, Hooper said.

“They said this is a once-in-a-lifetime auction, and that’s true,” he said.

Campbell, who said he bid nearly $1 million over what he had planned, agreed it was a rare opportunity, and the land could have been a boon for his operation.

“Every piece of land I didn’t buy, I wish I would have went ahead and bought it,” Campbell said. “Except this might be the first.”