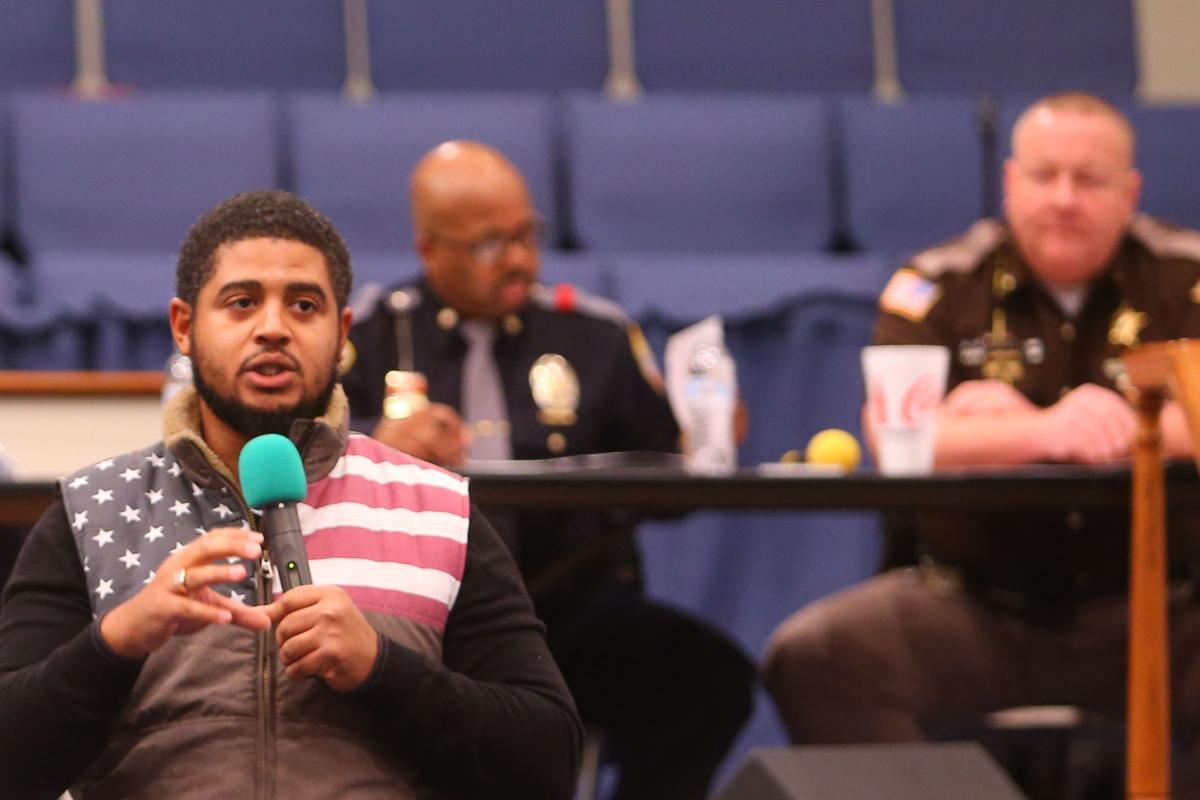 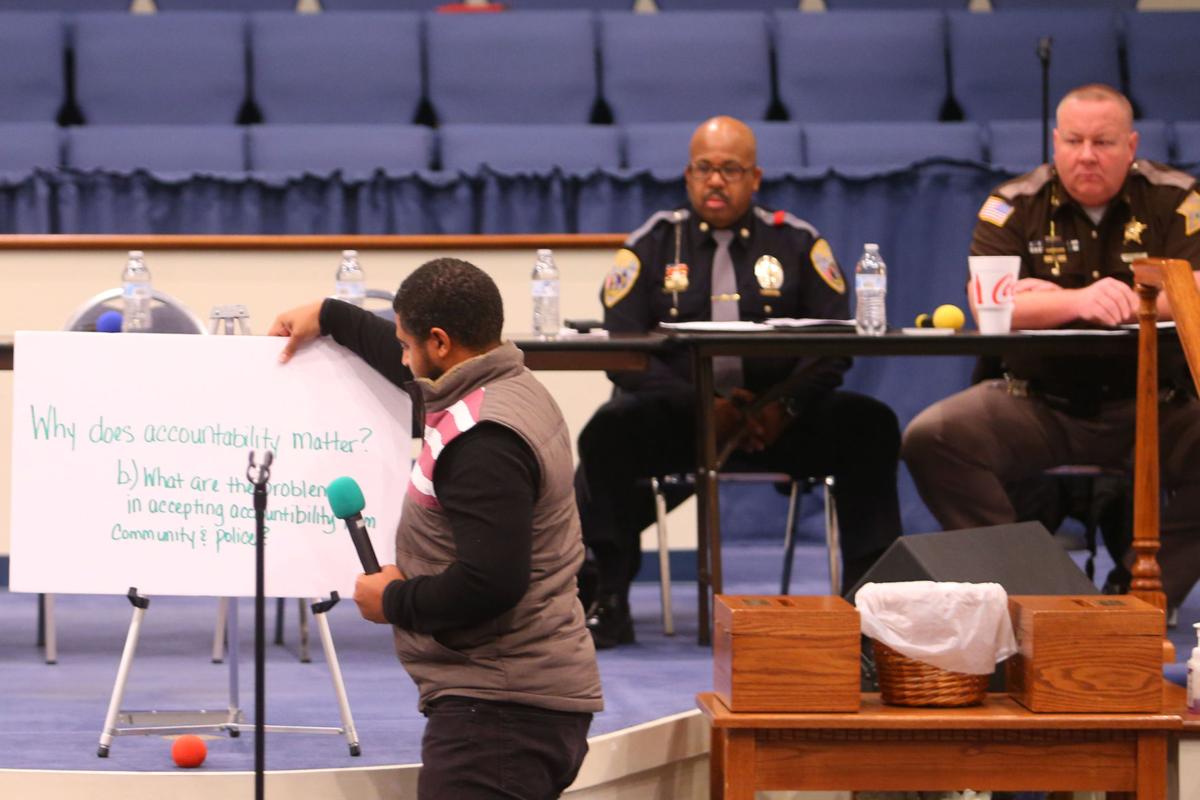 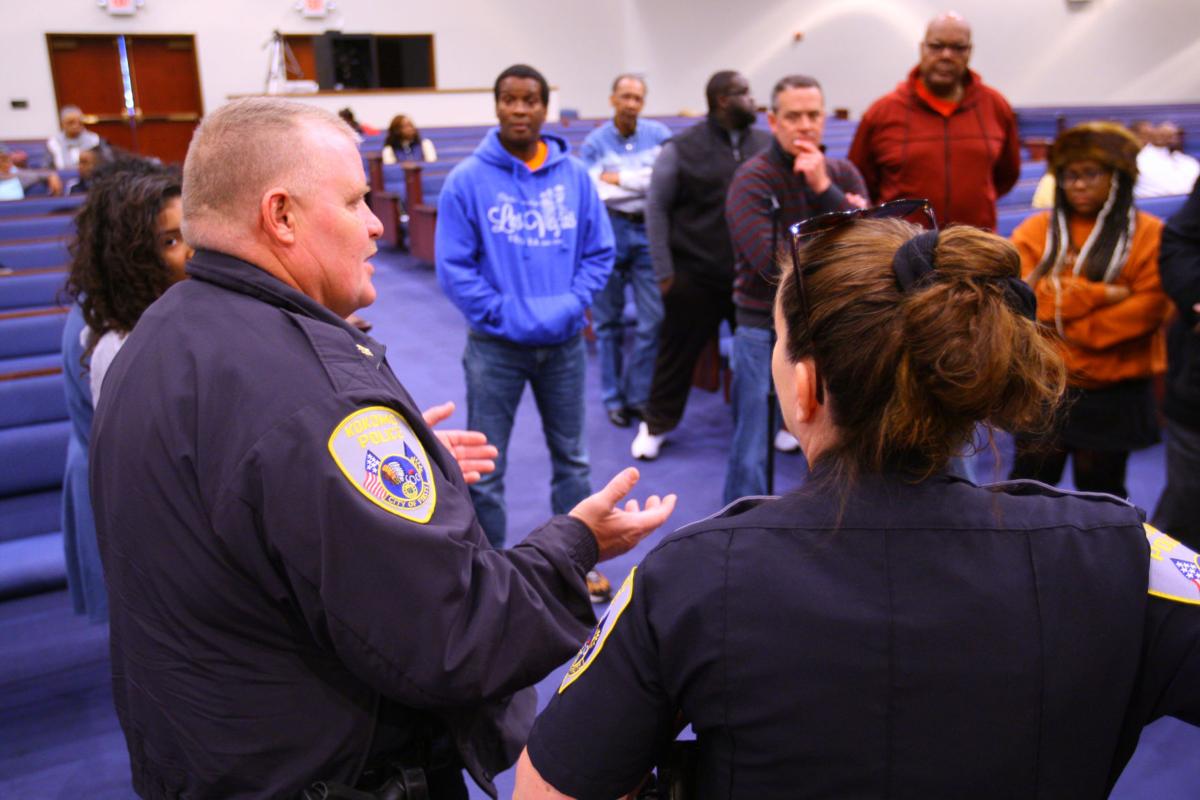 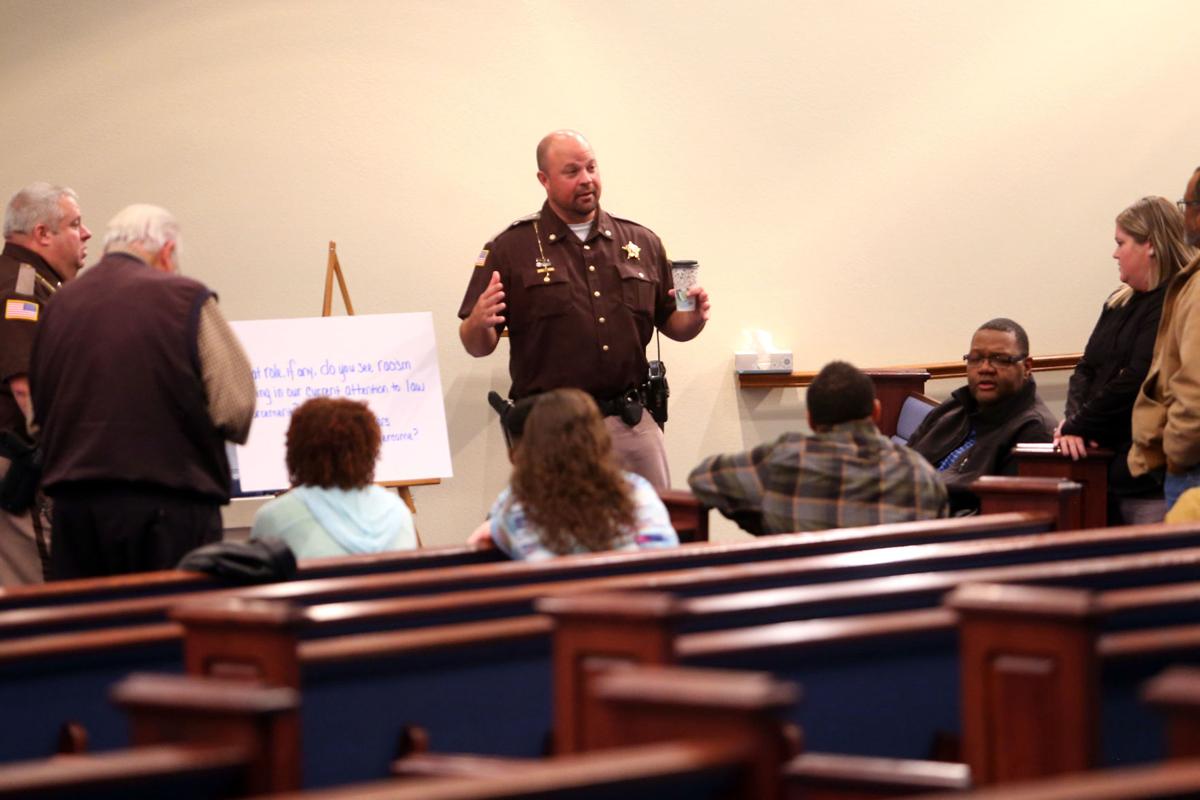 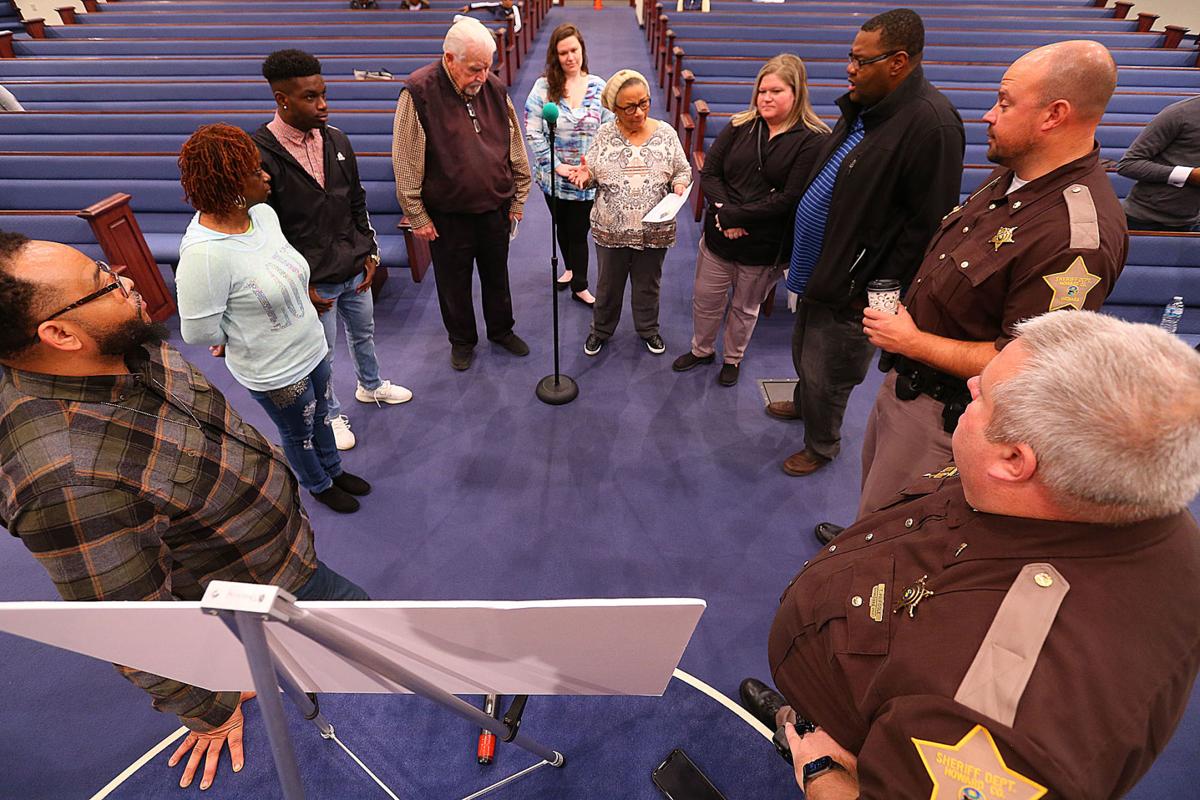 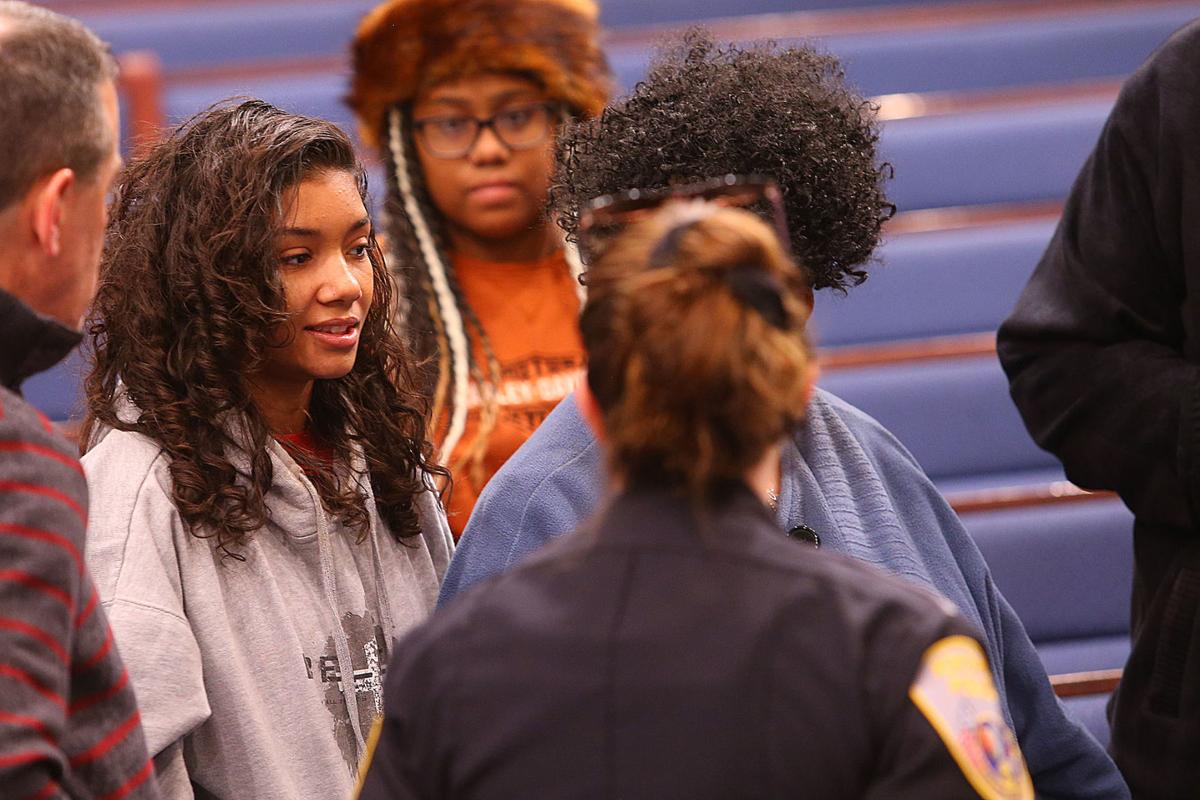 One of the younger participants, Nasya Barbeur, gives her perspective to the problems. 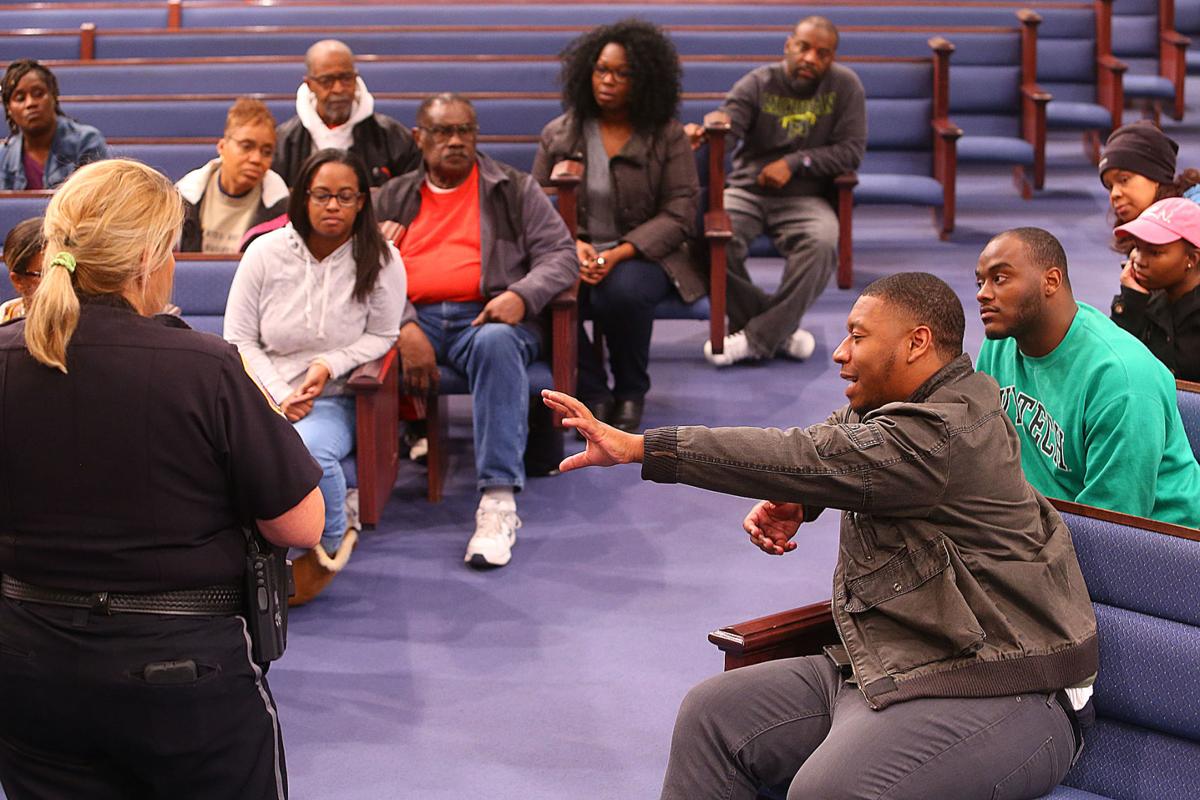 During a breakout group discussion, William Foster addresses some of the issues. 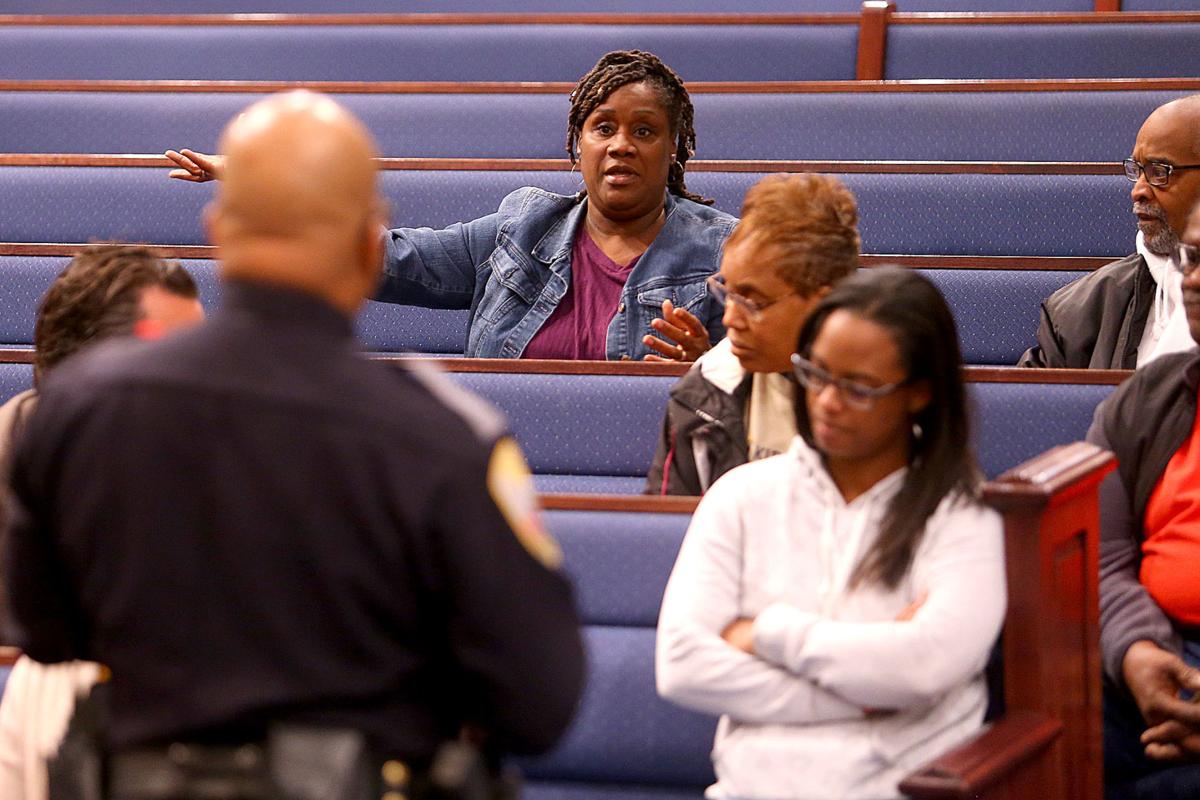 Carmen Ferguson attended with her husband add her input. 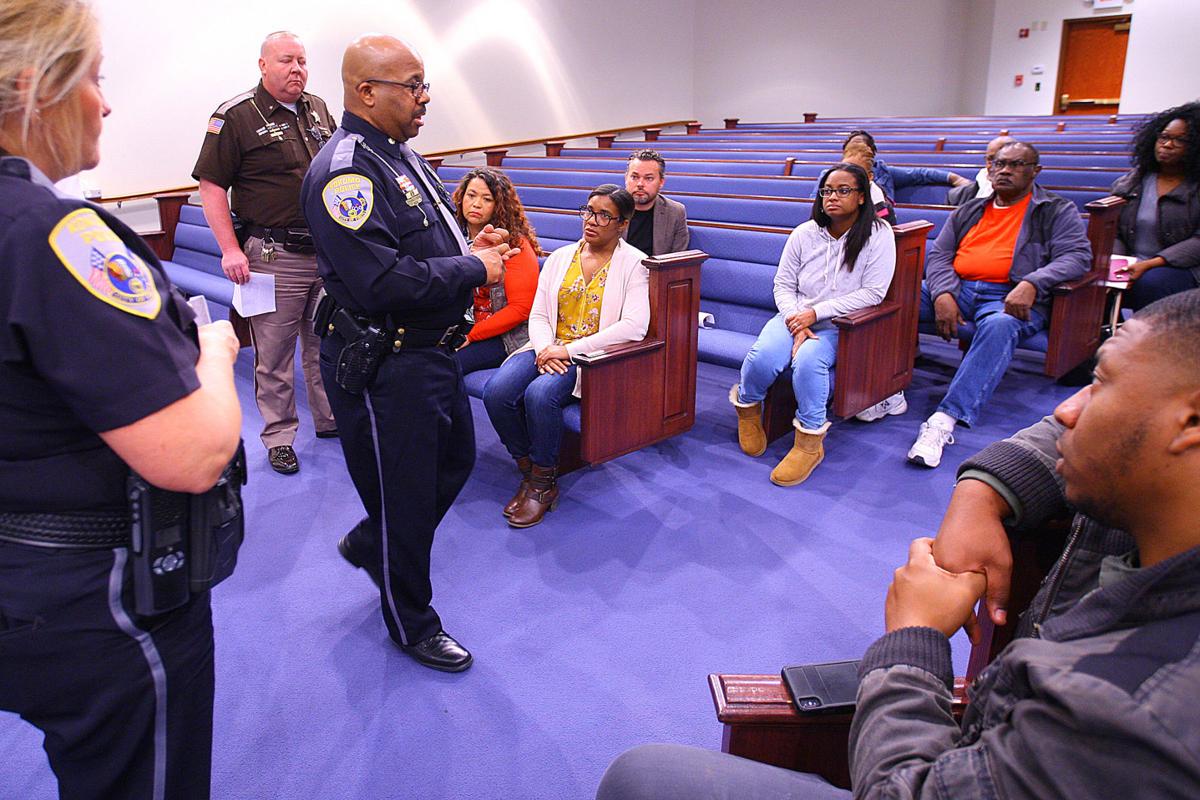 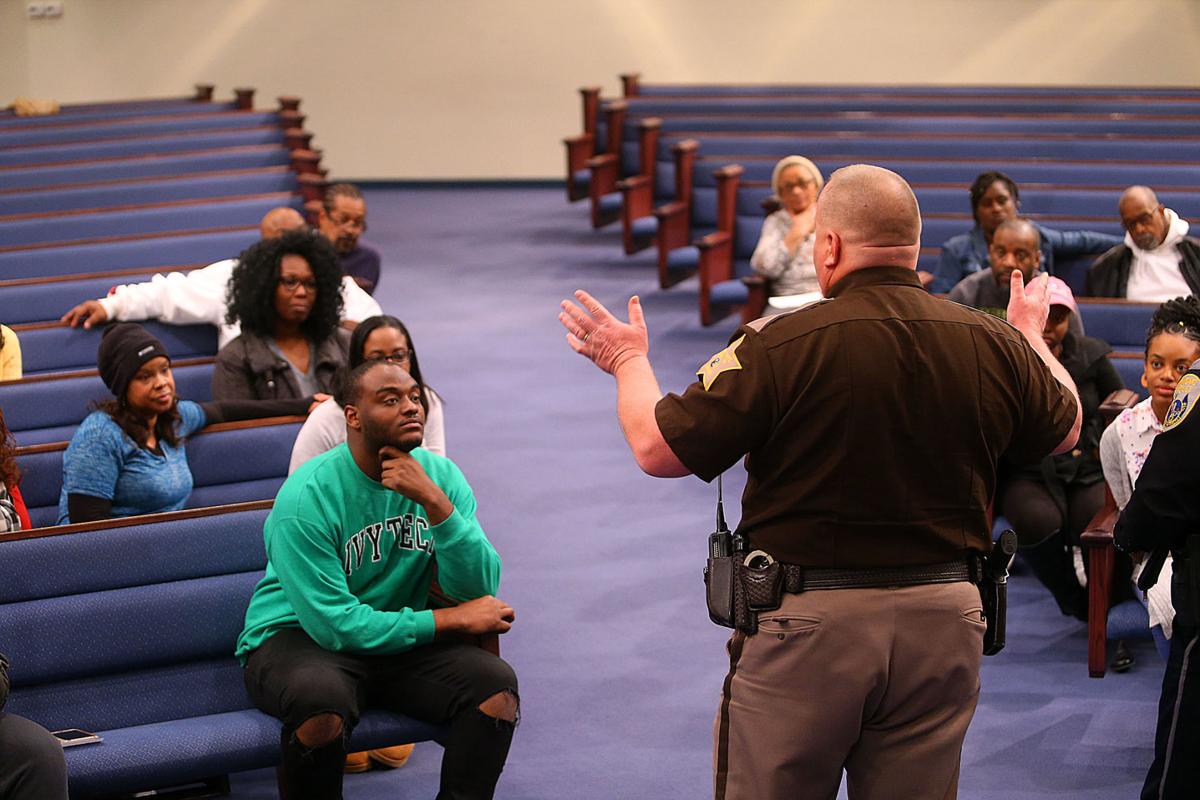 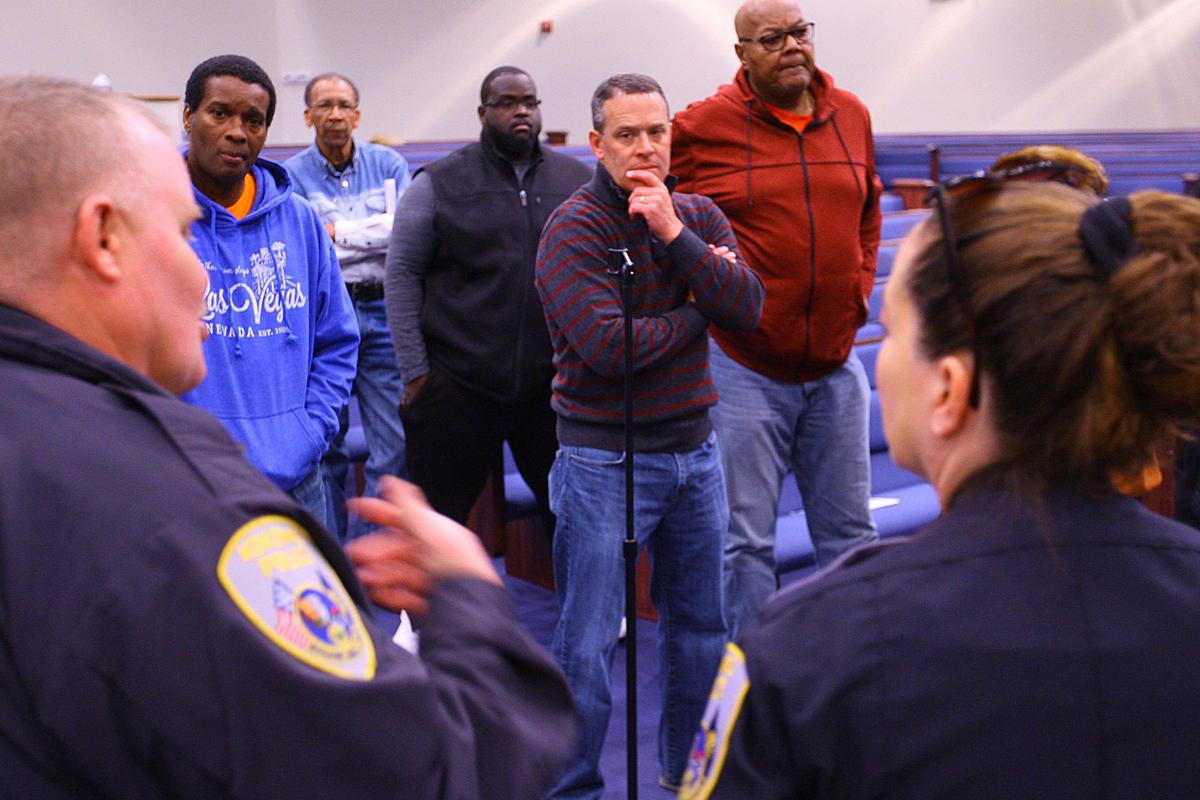 One of the younger participants, Nasya Barbeur, gives her perspective to the problems.

During a breakout group discussion, William Foster addresses some of the issues.

Carmen Ferguson attended with her husband add her input.

How can the community and police work together to build relationships? Why does accountability matter? What role, if any, do you see racism playing in our current attention to law enforcement?

Those questions and more were put on the table last Saturday during a community forum with local law enforcement officers from the Kokomo Police Department and Howard County Sheriff’s Department at Mt. Pisgah Missionary Baptist Church.

The forum — organized and moderated by the church’s young adult ministry — was an opportunity for both police and community members to get together and talk candidly about some of the issues they feel are facing Kokomo, particularly topics like implicit bias, police brutality, fear and racial profiling.

For more than two hours on Saturday, both sides did just that, through the use of small groups and an interactive panel discussion with a question and answer session.

“Our pastor talks to us a lot of times about the responsibility and accountability we have as community members as we look at what’s going on around the country and some of the realities of the gap between the community and law enforcement,” Mt. Pisgah Young Adult Pastor Precious Majors said. “Some of these bigger issues and challenges that other places and regions are facing, like overuse of force, police brutality, even death, we’ve been thankful enough that we haven’t really experienced much of that here.

And that means often having some sticky and uncomfortable conversations, Majors said, such as the issue of police fear and intimidation when it relates specifically to the African-American population.

For several minutes during Saturday’s panel discussion with the audience, 21-year-old Kokomo resident K.J. Williams spoke to law enforcement officers about the fear factor, specifically as it pertains to African Americans.

Williams once again took a few minutes after the conclusion of the forum to address that fear, saying that social media often plays a huge role in it.

“From a young age, we’re taught from our black moms and black dads to be careful with police,” he said. “Social media has sort of amplified that and enhanced it and just given us our own sense of awareness, so now that’s why you see so much nervousness and timid behavior.

“You see the videos where people are getting shot in the back, and they look like me, so I identify with them, and so that naturally just makes me scared too,” he noted.

But that fear often runs both ways, Williams claimed.

“I do think that police have a fear of black men in particular,” he said. “That’s just coming from my own experiences, but because I look like somebody they’ve arrested or dealt with before, because I have tattoos, am tall, have black skin and facial hair, whatever, I think that plays a part in that fear.

“Two days ago, if they dealt with a person that looks just like me, and they were fighting to get them retrained, I feel like they [police] are just going to automatically assume the same about me. As a police officer, even the side of their car says to serve and protect. So the first thing you should be doing is protecting yourself and that person you’re serving.”

Mt. Pisgah choir director Rhonda Hill agreed with some of Williams’ statements, especially his views on social media’s influence in relation to issues like police brutality.

“I think it’s because of what is seen or heard, it causes people to panic,” Hill said. “And naturally the instinct is to run because of the appearance of danger. But I think social media and the media in general have painted this picture that if you see someone in blue or in brown that they’re monsters. But it all falls back on the parent.

“I have three African-American sons, and it falls back on me to instill knowledge to them,” Hill continued. “I have to constantly tell my 7-year-old that the men and women in blue or brown aren’t the bad guys. They’re not. It’s just all about knowing what to do and what not to do in any given situation.”

Donita Humphries is a lifelong Kokomo resident, and she said she attended Saturday’s forum to gauge where local law enforcement stood on some of the issues facing the city.

“Our church having this, I know what our take is,” Humphries said. “I just wanted to hear law enforcement’s side on bridging the gap and trying to build a better community. … These conversations are very important to me because even I’ve been followed [by police].

“And you see police watch, and so you make sure you use your turn signals and don’t run through yellow lights,” Humphries noted. “And I can see the officers run my tags as they follow me and follow me all the way to my street across town. To me, that just seems wrong.”

Humphries did say she was thankful to see police demonstrate a traffic stop situation to the audience on Saturday, but she said she still has concerns when it comes to those types of incidents, especially when it’s just herself in the vehicle.

“Just being pulled over, I do worry sometimes about what they’re going to do to me,” she claimed. “Am I going to make you nervous? They [police] said today that they just wanted to make sure they have the chance to go home at the end of the day. Officer safety, sure, but what about my safety when I’m out at night and going home from whatever I am doing?”

And though community members did outwardly voice their concerns on Saturday, all of them interviewed said they believe the forum was a springboard for future conversations, and they appreciated local law enforcement officers being involved.

“It was a good starting point and just some things we haven’t discussed recently in a public way,” Cockrell said, referring to the forum. “And I think it was really good to do so in a give and take feedback. There were some good things that were brought out that would probably merit some further looking at obviously, and there were some really good suggestions.

“The KPD has a desire to be transparent in those occasions, and it’s our desire to have a good community relationship,” Cockrell noted. “That’s my hope through all of it. Everybody has a place to grow from, whether that’s people in our community or police. We all have things to improve on obviously, and I think it [the forum] was a good place to look at that.”

Cockrell also stated that she hoped Saturday’s forum allowed community members in attendance to walk away with a better understanding of KPD and HCSD’s role in Howard County.

“Our officers take great pride in what they do,” Cockrell said. “They don’t get to self-promote very often all they do to keep the public safe and follow up on the crimes they’re investigating in the community. … Our officers take a great deal of pride in that on a daily basis.”

And though those who attended the forum said a concrete solution to bridging the gap between the community and law enforcement wasn’t necessarily hammered out in a two-hour discussion on Saturday, they did say it was a good start.

But it takes a village, residents and police both said. It takes a community coming together to build a stronger Kokomo.

“The thing about a village raising a child is that you have to care first,” Hill said. “There could be 1,000 people in a village or community, but if nobody cares, what’s the point? … You have to care enough about something to try to prevent it from happening. It starts with us as a community, and that includes law enforcement as well.

“We need these types of panel discussions,” Hill continued. “We need to be able to lay it all out on the table when we’re not in a hostile environment. These conversations should not take place after the fact. These discussions and preventative measures need to be done now.”

Energy was high at the first Kickball with the Law game at Studebaker Park on Thursday evening. But though the two teams sort of kept score an…