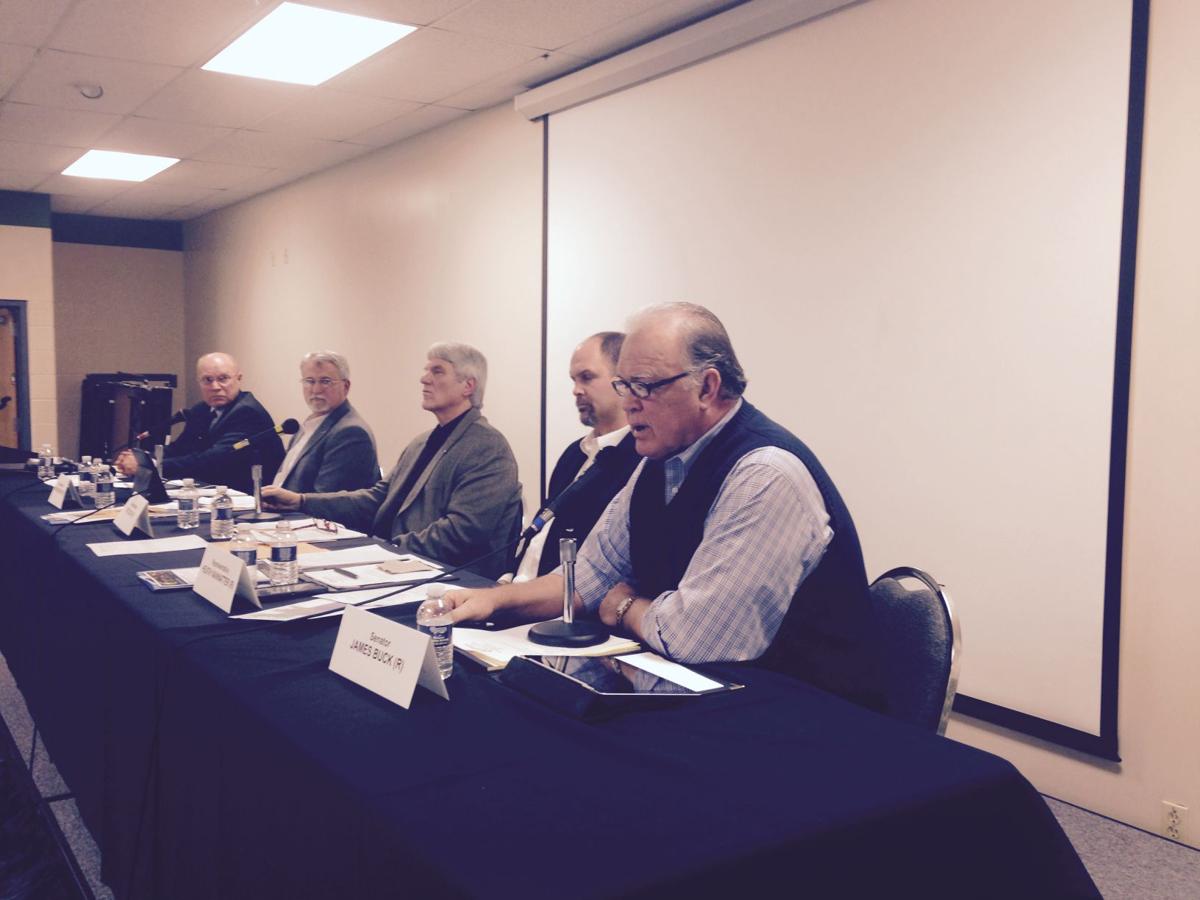 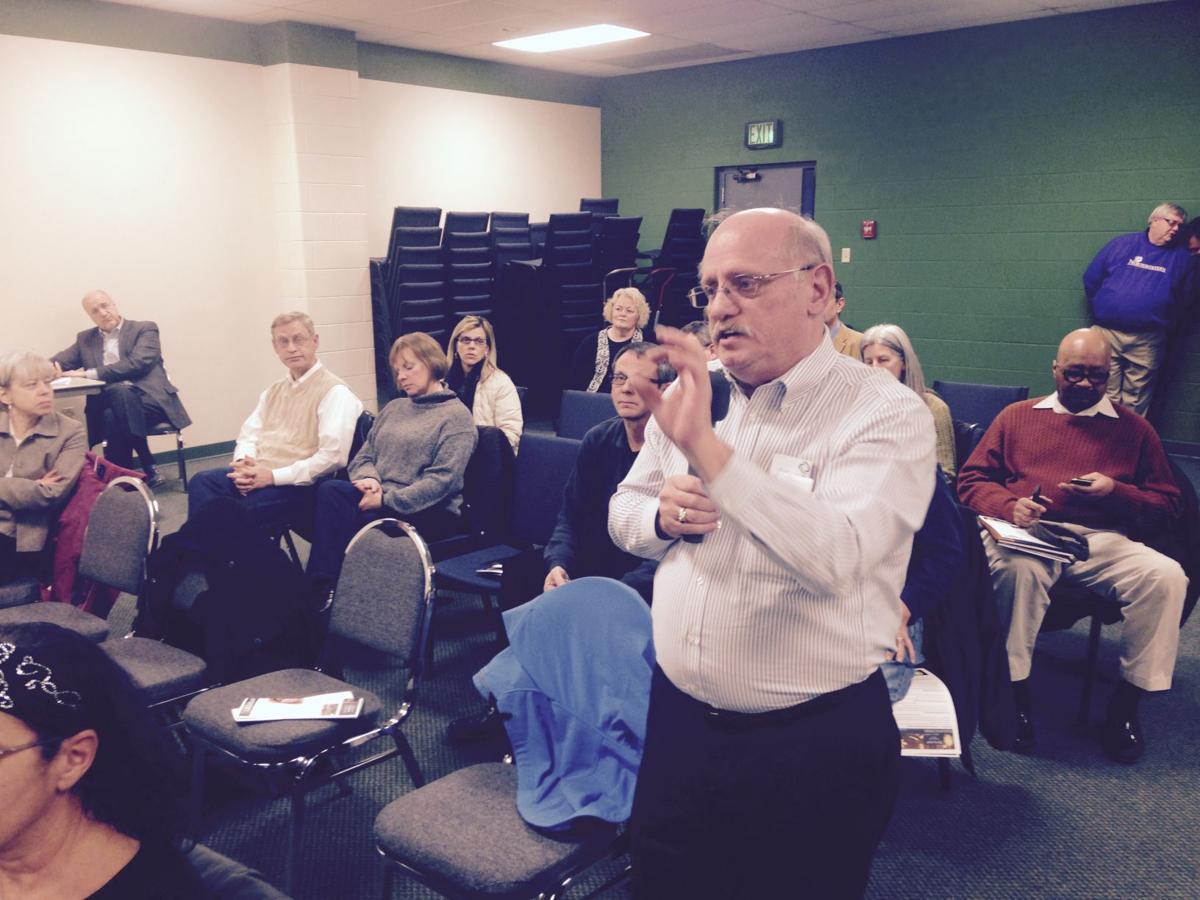 What was supposed to be an open forum to allow members of the public to familiarize themselves with the types of bills set to be debated during the 2015 state legislative session turned into a verbal sparring match between Kokomo city director of operations Randy McKay and State Sen. Jim Buck, R-Kokomo.

The heated discussion took place during Friday’s Third House legislative forum at Ivy Tech’s Alumni Hall, just hours after Bucks "cease and desist" bill passed the third reading on the floor of the Indiana Senate with a 41-8 vote, a bill which could halt construction on the downtown baseball stadium.

After the panel, which included Buck, State Rep. Heath VanNatter, State Rep. Mike Karickhoff and State Rep. Tony Cook, addressed the bills they have authored in anticipation for the session, the panel began answering questions from the public.

Fifty-five minutes into the session, McKay stepped to the microphone and after explaining the verbiage of FEMA Code of Federal Regulations 44, asked Buck why he would interject a bill and interfere with federal regulations by inserting a bill that would “usurp” its authority and jeopardize $40 million of development in the city of Kokomo.

Buck explained that FEMA runs its money through the state, and state legislators work in conjunction with municipalities for grants.

Buck called the DNR in early August to find out what was transpiring. DNR informed Buck it had issued a foundational permit, meaning concrete would be put at ground level.

“I asked them ‘The stadium that’s going in, is that going to be considered a holding pond?’” Buck said. “They said ‘As far as we understand it, it will be.’ I said ‘So we’re going to have a $14 million holding pond, that’s OK with the state, and we won’t have any problem with the flood waters?’ They said ‘That’s our understanding.’”

In September, Buck said there were eight parcels of land associated with the project that were in violation of the agreement for flood mitigation funds. After negotiations with FEMA and Homeland Security trying to work out some kind of reconciliation, nothing came to fruition.

In November, Buck said Kokomo was still not in FEMA compliance, and a letter was sent to city officials telling them their acts were running the risk of causing all 92 Indiana counties to lose their chances at flood mitigation grants.

Homeland Security then sent Kokomo a letter of cease and desist, according to Buck, so that the rest of the state would not be at risk of losing funding. Buck said construction on the project continued unabated, and is currently still ongoing.

“When I found out about it, I asked everyone I could think of, [and] I asked the city engineer who is liably responsible if someone gets flooded out that doesn’t have flood insurance,” Buck said. “After extensive review, he said it would probably be the planners and the board.”

Several weeks later, Buck said he received word from FEMA Thursday night that Kokomo was still out of compliance. The 41-8 vote followed Friday. Buck added he was told FEMA does not see the project coming into compliance.

Buck confirmed the city is pursuing litigation regarding the matter.

“I have 130,000 people in my jurisdiction,” Buck said. “Many of them live along that particular corridor of the Wildcat Creek. I’ve lived here most of my life and have helped a number of people move their belongings out to the curb. I would love to see a ball diamond. That’s not the point. … I’m not going to sit here as a state senator and allow the funds for the rest of the state be jeopardized because eight [parcels] aren’t in compliance.”

Buck said the worst case scenario could call for FEMA to tear down the completed part of the stadium construction, adding there’s no verbiage in the grant agreement that says a four-foot wall can be built to obstruct the free flow of water, which has been done in the outfield of the stadium.

McKay reminded Buck there has been no cease and desist order issued to this point, and that several detailed plans for the stadium were submitted to the Indiana Department of Homeland Security.

“The whole point is, under current federal law, there is an opportunity for the parties to get together to come into compliance,” McKay said. “There has never been a cease and desist order issued.”

McKay went on to add that at a Dec. 29 meeting with IDHS, after walking through the city’s plan, the IDHS said the city had met “the spirit of intent of the flood mitigation program and have acted in good faith in coming into compliance.

“The point is sir, we have federal regulations that deal with these situations,” McKay said. “No one in Howard County of the state of Indiana is in jeopardy of losing funding until we went through that process. Then, and only then, if Indiana Homeland Security says ‘I told you to comply and you won’t do it,’ now FEMA has the authority to tell the state it’s not going to get any funding because of your refusal to enforce the provision.”

State Sen. Jim Buck’s "cease and desist" bill was referred to the House of Representatives’ Natural Resources Committee today during the bill’…

The Indiana Department of Homeland Security announced Friday it would take legal action against the city of Kokomo over its baseball stadium project.