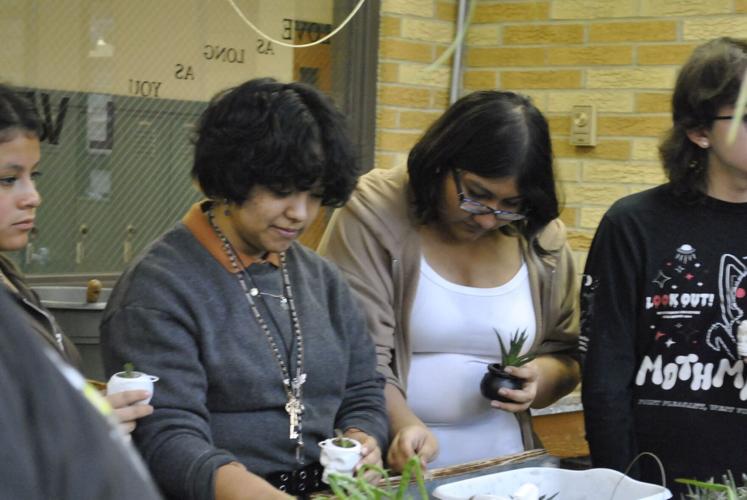 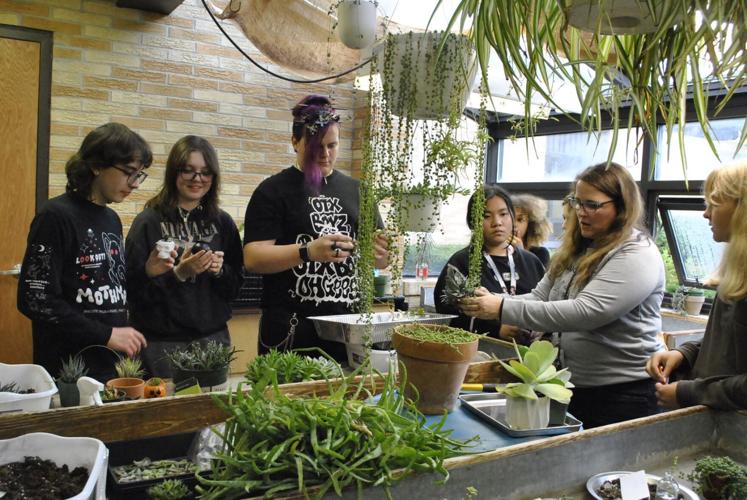 Jenn Harrold shows students in CHS Plant Club how to divide their plants. 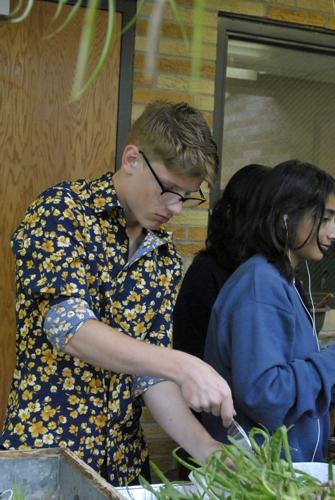 Jenn Harrold shows students in CHS Plant Club how to divide their plants.

ELKHART — Plants really are the new pets and students at Concord High School, as it turns out, are obsessed.

Concord High School’s Plant Club started off the year with a bang as more than 80 students signed up for the club during the school’s activity fair. While only about 45 attend on any given day, it’s significantly more than organizers expected.

“It’s so wholesome and it really catches on,” said club lead Jenn Harrold. “Once you get into it, it’s hard to stop. You’ll be shopping and you’ll start talking to someone and they’ll be like ‘I’ve got (these plants),’ and they’re like children — you’ll take out pictures of your plants.”

Due to the number of students who joined the club, leaders had to divide the club into two groups. While one group is in the greenhouse, another group is in the library, working on a related project. For example, during the Sept. 13 CHS Plant Club meeting, students in the library decorated skull and pumpkin planters for some of their incoming plants.

“We had way too many kids to fit in just one group. It’s a lot,” said staff sponsor Anna Kridler. “I would have been happy with 10!”

Groups alternate the use of the greenhouse space. During their outside-of-the-greenhouse-time, students will make crafts, and in other weeks, they’ll watch educational content or play games. They coordinate the groups based on students’ other afterschool activities.

“There are no plant clubs,” Harrold said. “Penn has a gardening club … but no one has this. We are setting up a model here.”

In the first year of the club, organizers decided to stick with learning about succulents since they only meet once per week. Students also liked this plan.

“I love plants, and I’m not good with succulents, so I thought I could learn from this,” said Ashlyn Lengerich, a sophomore. “I was surprised seeing how many people are actually interested in something that’s kind of boring.”

“I love seeing results,” club leader Harrold said. “All the things I’ve learned is from talking to people on Facebook, the people who own greenhouses. Everyone’s not going to say the same things. ... It’s all trial and error, so I’m teaching [the kids] to experiment. We’re just going to keep trying.”

Harrold became invested in plants herself in 2020, when coordinating her job as a safety manager all the more complicated.

“It was really rough trying to write a whole program to navigate that and keep the employees safe all while you couldn’t go out and shop, you couldn’t go out to the movies and all that,” she said. “I happened to buy a planter for a fundraiser. I’m not good at plants, but I bought a succulent thing and I let it sit on my dining room table.”

One day she noticed that a leaf had fallen off her plant, and thus began her newfound passion for plants.

“A leaf will fall off and start a whole new plant,” Harrold said. “My sister-in-law in Key Largo, I posted on Facebook about it and she’s like “girl, you’ve got props — it’s called ‘propagation.’ ... A lot of these here are started by propagation.”

Harrold admitted that she’s better at succulents because they don’t require as much attention, despite attending the greenhouse at the school almost daily, making sure her student’s plants and future plants are just perfect and having a whole room of plants in her own home.

The CHS greenhouse, as it turns out, despite being original to the school, was unused when Harrold and Kridler set to open the club. Being a literal unused greenhouse, it was the perfect place to keep the club’s projects. She even found unused vintage pots in drawers and on shelves of the room.

As a new club, CHS Plant Club is still in need of supplies, and donations are welcome.

CHS Plant Club is viewable to the public on both Facebook (CHS Plant Club) and Instagram (concordplantclub), but only students in the club will be permitted to join the groups, to keep comments from outsiders down.

Dani Messick is the education and entertainment reporter for The Goshen News. She can be reached at dani.messick@goshennews.com or at 574-538-2065.