Howard County had the highest unemployment rate in the state for the month of April.

The county’s April non-seasonally adjusted unemployment rate, the most recent available, was 34.1%, according to preliminary data released by the U.S. Bureau of Labor Statistics. In raw numbers, the bureau estimates 14,035 of the county’s 41,165 total workers were unemployed in April. 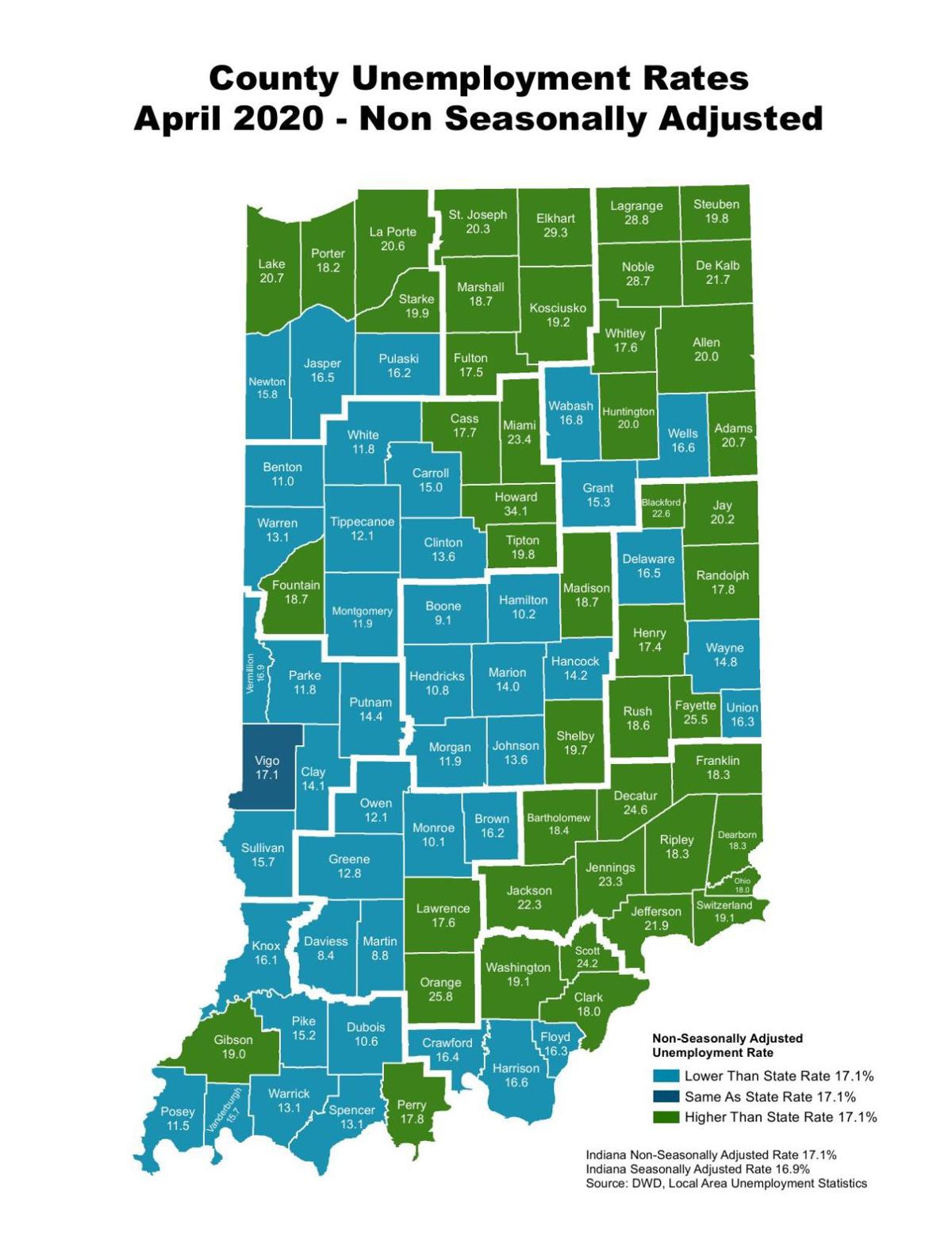 The county’s April unemployment rate is indicative of how large of an impact the COVID-19 pandemic has had on local employment and a reminder of just how reliant the county is on its manufacturing base.

During the first three months of the government-forced shutdown of businesses, Howard County saw huge numbers of its residents file for unemployment.

According to data from the Indiana Department of Workforce Development, a total of 11,885 county residents filed for unemployment from mid-March to the first week of May.

Initial claims for unemployment peaked in the last full week of March at 4,579, the week after the Howard County commissioners declared a public health emergency and closed all businesses deemed “nonessential.”

Weekly initial claims have declined ever since. Just 395 people filed for unemployment at the end of the first week of May.

The county’s continued claims – residents who are actually receiving unemployment benefits – are also at heights not seen in recent times, standing at 7,252 for the week ending on May 2, the most recent data available.

Like many communities, Howard County hasn’t seen these high of unemployment numbers since the Great Recession. Then, the county’s unemployment rate peaked at 20.2% in June 2009 and it consistently stayed above 10% until 2012.

Peak initial and continued claims for unemployment during the Great Recession were 1,874 and 5,287, respectively.

The county’s unemployment is not expected to remain as high in the summer months as it was in April since the majority of workers for the county’s largest manufacturers have returned to work and other businesses have begun reopening.

Howard County continues to live and die by manufacturing, particularly the automobile industry.

Kokomo made the third most dramatic economic improvement in the country since 2009, according to a 2018 study released by Bloomberg, in large part due to the recovery of the city’s largest employer, Fiat Chrysler Automobiles.

But as the Great Recession and now the ongoing pandemic has shown, a reliance on the automobile industry can be a double-edged sword.

The county’s 34.1% unemployment rate can largely be attributed to FCA, Haynes and other manufacturers temporarily closing their plants beginning in mid-March due to COVID-19 concerns.

Of the county’s 7,252 continued unemployment claims for the week ending on May 2, 4,867 – or 67%- of filers were from residents employed in the manufacturing industry, according to state data. Second highest in unemployment claims were from workers in accommodation and food service, followed closely by those in health care and social assistance.

Economic diversification away from FCA and the automobile industry in general has been an issue discussed locally for several years.

“It’s on the forefront of everyone’s mind,” Moore said, highlighting the fact FCA has internally diversified in Kokomo with the revamping of one of its local transmission plants to an engine plant.

In his “Kokomo 2020 Forecast” Dr. Alan Krabbenhoft, dean of the School of Business at Indiana University Kokomo, noted that manufacturing accounts for nearly one-third of the county’s and the surrounding region’s employment.

“With the region’s heavy dependence on manufacturing, it finds itself more exposed to risk from an economic downturn,” Krabbenhoft wrote. “Given that positions in manufacturing typically pay well, the risk is even more enhanced due to the potential ripple or multiplier effects that may run through the economy should jobs in the industry be lost. The Great Recession was evidence of such.”

In an interview with the Tribune this week, Krabbenhoft reiterated the need for the county to diversify its workforce.

“Diversification for our economy is still an important aspect,” he said. “I certainly, as I imagine everyone else in the county does, love that we have this manufacturing base that provides good-paying jobs to a substantial portion of our population, but as we saw just recently, an extended shutdown can create havoc. Fortunately, we’re at the point of time of bringing those employees back.”

The shortfall in state revenue was a cause for alarm for Jim Papacek, Howard County Council president, because if the state is seeing decreased revenues, local governments will most certainly see the same.

At the county’s regular meeting Tuesday, he told department heads to be prepared for some “belt tightening” in the coming future.

“From my perspective, any request for any additional appropriation outside of what’s already been budgeted will be scrutinized more than what they normally would,” Papacek said. “We’ll probably only entertain a request if it’s deemed an emergency. ... I know you hear every year from the council that things are going to be tighter. Well, we’ve already seen things are tighter. With all of us working together, as we have in the past, we’ll get through this. I imagine this will be a budget session like no other.”

As of Tuesday, the county has collected 63% of property taxes.

According to Martha Lake, Howard County auditor, FCA paid half of its property tax on May 11. While spring property taxes were still due on May 11, Holcomb waived penalties on any late payments through July 11.

An April study looking at the potential financial impact to county’s local income tax collection due to COVID-19 done by the Center for Business and Economic Research [CBER] at Ball State University estimated that Howard County could see a revenue shortfall of between $2.7 million on the optimistic side and $3.9 million if the state and country fall into a deeper downturn and revenues for July till the end of the year are just 60% of what they were last year.

Notably, the study does not take into account the effect of the CARES Act or any other federal program aimed at reducing the negative financial effects of the pandemic, including any money Congress earmarks to go to state and local governments.

“We have been observing and participating in economic estimates of the impact of COVID-19 since January,” CBER director Michael Hicks said in the study. “The only consistent observation over this period is that every projection has worsened following later analysis.

“Our first scenario is especially rosy, suggesting a return to normalcy and baseline economic conditions in the second half of 2020,” he said. “Scenario 2 is more likely, suggesting continued economic performance well below baseline through 2020. Indeed, this forecast is for a three-quarter recession that is greater than any in the post-war period. This too might be optimistic.”

At city hall, Moore said the controller’s office has been monitoring the situation closely, though the city doesn’t have its own projections at this point, but the mayor has instructed each department head to create a five- to six-year plan listing their respective department’s most immediate needs and what projects can be pushed off for the time being.

Howard County led the state in the percentage of unemployed workers for the month of May.