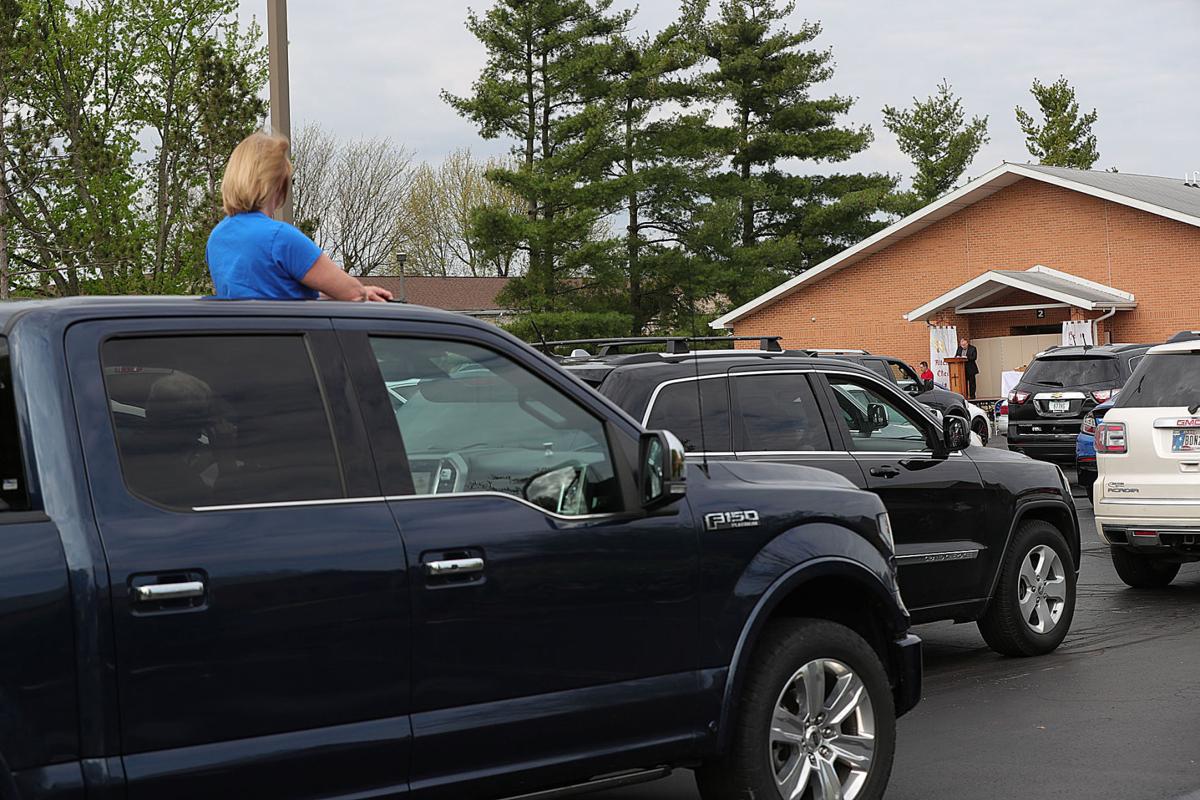 Church members attend a parking lot service at Lutheran Church of Our Redeemer in Kokomo on May 3rd. Roger Davis | Kokomo Tribune 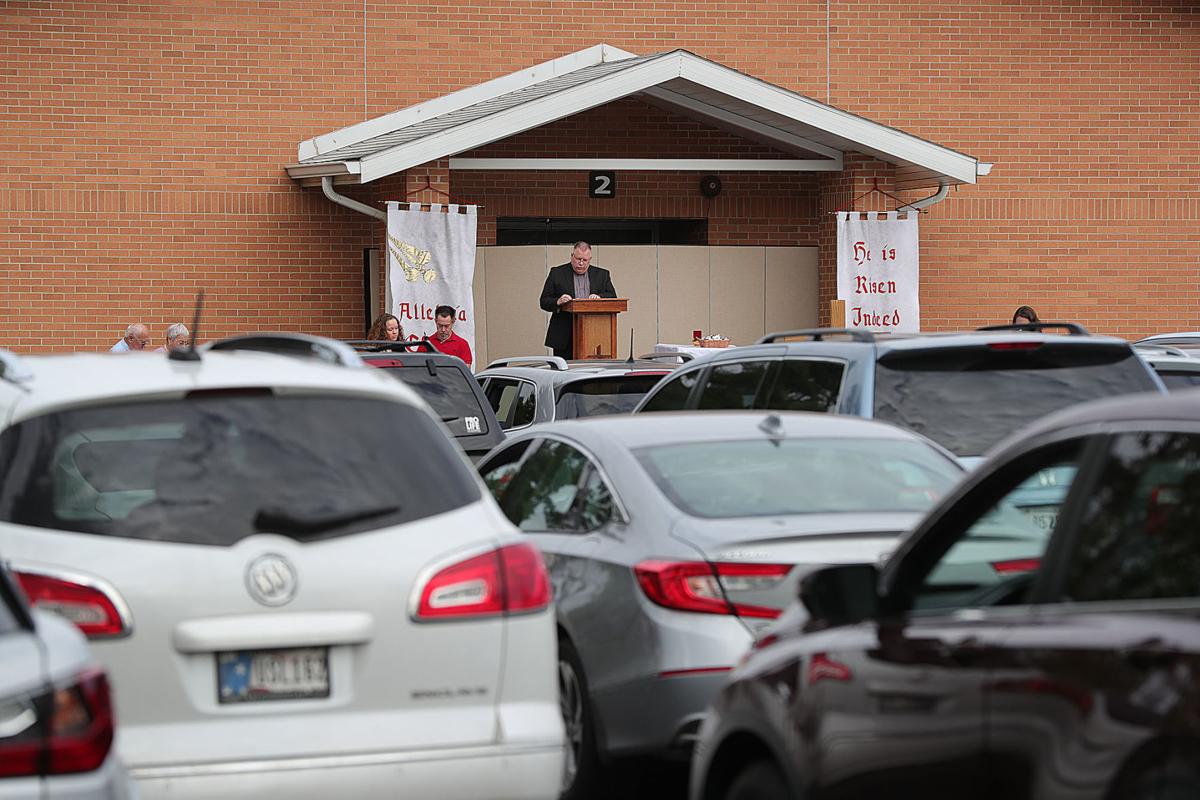 Pastor Akers delivers a message during a parking lot service at Lutheran Church of Our Redeemer on May 3rd. Roger Davis | Kokomo Tribune 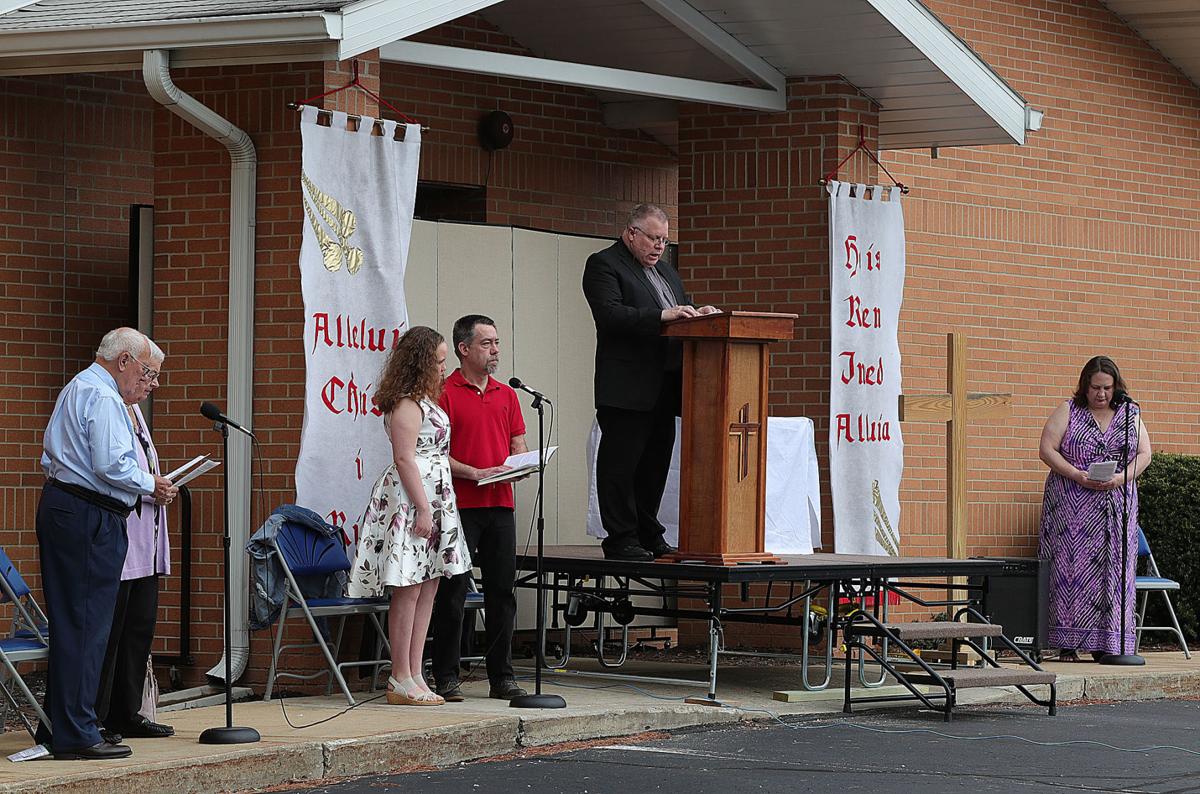 Pastor Akers delivers his message during a parking lot service on May 3rd. Singers separated by family groups and unmasked in order to sing. Roger Davis | Kokomo Tribune 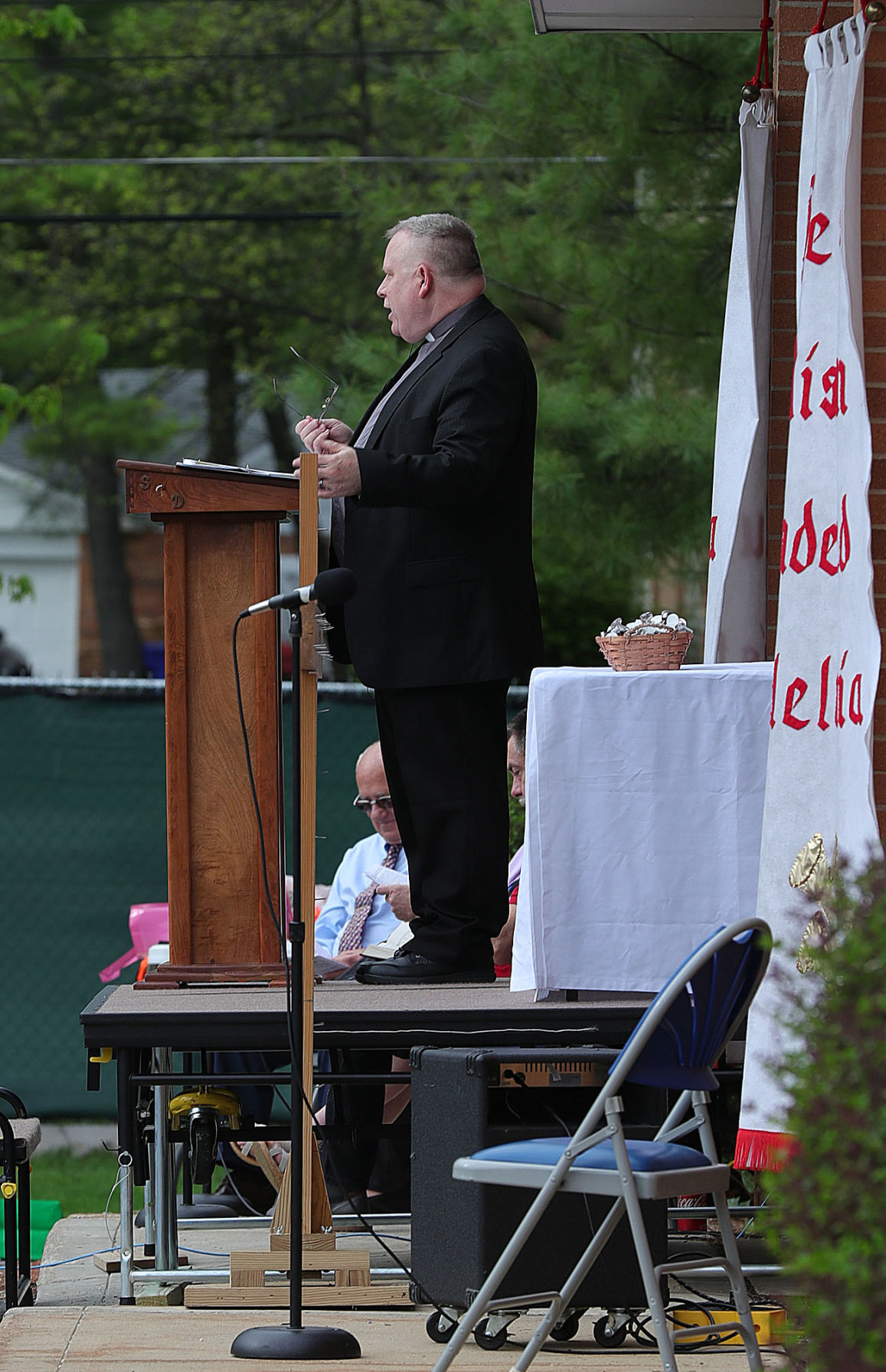 Pastor Akers speaks to church members in their cars at a parking lot service May 3rd at Lutheran Church of Our Redeemer. Members listened over FM radio. Roger Davis | Kokomo Tribune 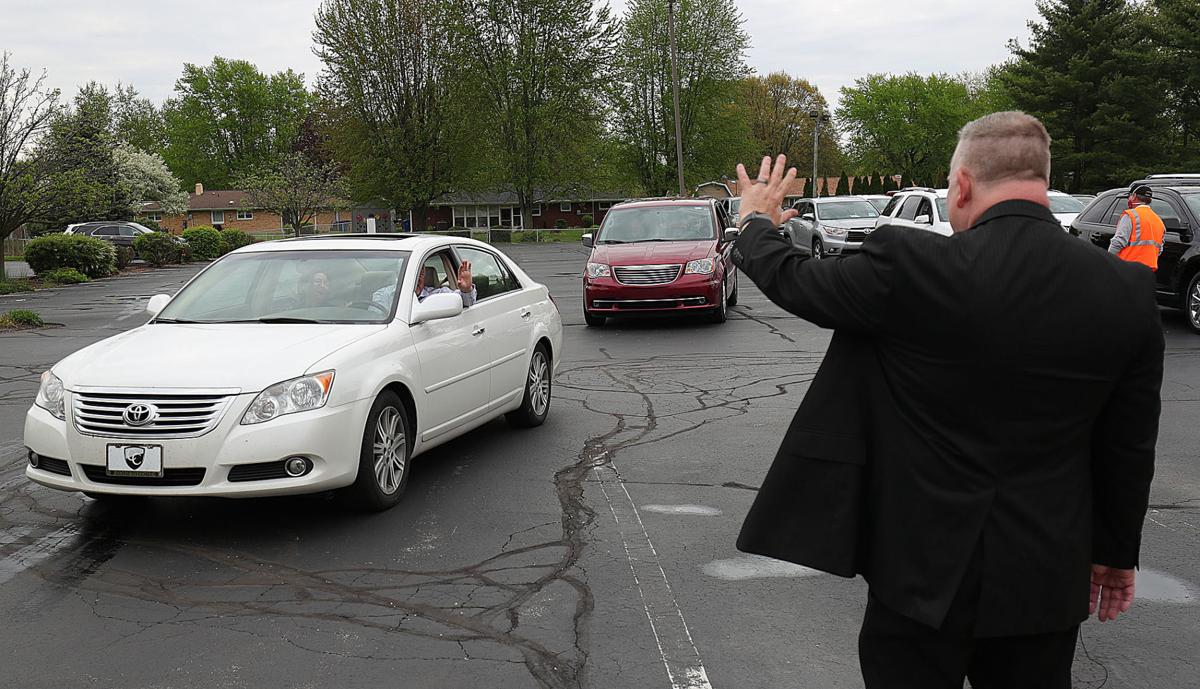 Cars spaced in a checker-board pattern during a parking lot service at Lutheran Church of Our Redeemer in Kokomo May 3rd. Roger Davis | Kokomo Tribune

Church members attend a parking lot service at Lutheran Church of Our Redeemer in Kokomo on May 3rd. Roger Davis | Kokomo Tribune

Pastor Akers delivers a message during a parking lot service at Lutheran Church of Our Redeemer on May 3rd. Roger Davis | Kokomo Tribune

Pastor Akers delivers his message during a parking lot service on May 3rd. Singers separated by family groups and unmasked in order to sing. Roger Davis | Kokomo Tribune

Pastor Akers speaks to church members in their cars at a parking lot service May 3rd at Lutheran Church of Our Redeemer. Members listened over FM radio. Roger Davis | Kokomo Tribune

Cars spaced in a checker-board pattern during a parking lot service at Lutheran Church of Our Redeemer in Kokomo May 3rd. Roger Davis | Kokomo Tribune

As the stay-at-home order slowly eases, churches have found themselves precariously in between open and closed. Under Gov. Eric Holcomb's reopening plan, stage 2 allows gatherings of up to 25 people, which leaves churches in a bind.

Lutheran Church of Our Redeemer is navigating that tricky position by holding parking lot services. The church's first parking lot service was held May 3 and the outdoor services will continue through May, Associate Pastor Barry Akers said.

"You wouldn't think you'd be excited about church in a parking lot," he said. "But it's been a really neat opportunity."

The pastor stands on a stage in front of the church entrance, and cars are parked in a checker-board pattern to allow visibility. Putting together the service is no small feat, however.

Volunteers have come together to make the services happen. The deacons, gloved and masked, put together service packets for each car that include orders of worship and a pre-packaged communion set. Music is pre-recorded by the organist. Some members help navigate parking before the service. In all, Akers said 30-40 members have stepped up to volunteer.

Notably, one member, Roger Davis, put together an FM transmitter which covers the area of the parking lot to allow the service to be broadcast to car radios.

"We couldn't do speakers, we're in a neighborhood and we didn't want to just blare out and bother people," Akers said. "Roger Davis put that together and it is just amazing. It works, you tune to 89.1, or whatever station it is, at 9:30 on Sunday in that parking lot, and you're in church."

Akers said the social distancing services have allowed him to chat with congregants through car windows before services, which is not quite the same as shaking hands, but it's something.

"It allows me to touch base," he said. "I miss that. Usually as everyone's walking out of church, we shake hands, and catch up again. Just having that chance to talk and making those connections has been good."

Another local church with a volunteer-minded congregation is Second Missionary Baptist Church. After Rev. William Smith posted on social media that he missed seeing his church, member Tina Robinson came up with a plan to surprise him. Robinson said she saw stories of congregations driving by their pastor's houses in the news, and was inspired to do something similar.

Robinson worked with the church's celebrations committee and Smith's wife to solidify the surprise on May 2 at 11:30 a.m., because that is in the window of weekly tithe drop-off. She secretly contacted members by excluding Smith from the church's mass call out system. The goal was to make some noise for the pastor.

"I told them you can bring signs, balloons, noise makers, you can bring a pot and a spoon, we just want to make noise for pastor," she said. "Practice social distancing, wear a mask. It's nothing formal. It was just, 'Let's make some noise.' When he came out and saw us, it was just something that gave you the warm and fuzzies."

Smith said the moment was very encouraging for him as he'd really missed his members. He's been holding services online via Facebook Live and conference calling. While he's eager to return to worship, he said he wants to be cautious about returning for the health of his church.

"I know that once we open, everybody will be ready to come," he said. "We have a lot of seniors, and they'll be ready to get out of the house. As a pastor, you're a spiritual leader. People look to you to set the example, and I have to be responsible with that."

Second Missionary Chairman of the Trustees Donta Rogers said the virtual services have allowed many members to attend who haven't been able.

"Some are in nursing homes and they can call in or even get on a computer and watch the service and feel like they went to church," he said. "So much is available online, members are even able to give (tithe) online now. It's a great thing. There have been positives in the midst of all this."

Fuel Church Pastor Jacob Burgei said prior to the COVID-19 pandemic, there was a plan in place to add to a new church campus. In addition to the brick-and-mortar churches in Kokomo and Westfield, Fuel was going to open an "online campus," and the pandemic forced the hand of that plan early.

"The reality is, we never stopped having church, we just left the building," he said.

The first few weeks were a scramble, Burgei said, but viewership suddenly blossomed. The online services are held three times on Sunday and twice on Monday, plus a nightly, 30-minute chat with Burgei and his wife, Tara, called "Fuel your faith."

The church's total viewership each week has been approximately 30,000, Burgei said. Viewers have come from out-of-state and some even internationally.

"It shows that whatever the devil means to be evil, God will turn good," he said. "Our motto is we're hope dealers, that's our mission. We've just continued that mission. We were primed for this."

Morning Star Church Pastor Greg Reed, like Burgei, has transformed his church online. The church's worship team performs songs, and the pastoral staff participates in discussion throughout the service. Reed, accompanied by Pastor Lissa Litka, gave a sermon on Psalm 136 on May 3, and added incentive for digital participation.

"For those who are parents, comment one thing you remember teaching your kids. If it's the same thing I'm thinking about, I'll buy you lunch at McAllister's when it opens back up," he said.

The online services have shown a boost in viewership, and Reed said he expects that anonymity and convenience has something to do with that. Gleaming tips from podcasts and even businesses like Starbucks and Chik-fil-A, Reed said he's concerned about bringing the message "where people are."

"You see businesses focused more on their delivery system rather than in-store business, and that's similar to us," he said. "We want to be able to have groups click and connect. We have to change how we deliver the message, especially for those who are more comfortable online. We're seeing people join in that would probably never come into our building."

He's hoping that by offering things like online small groups and many avenues to online services and videos will initiate connections with members and among potential churchgoers.

"It's kind of like online dating, at first you text back and forth a little, then maybe you'll meet up at Starbucks, and say, 'Hey, tell me about your life,'" he said. "The app is a tool. Eventually it's face to face, then it's heart to heart."