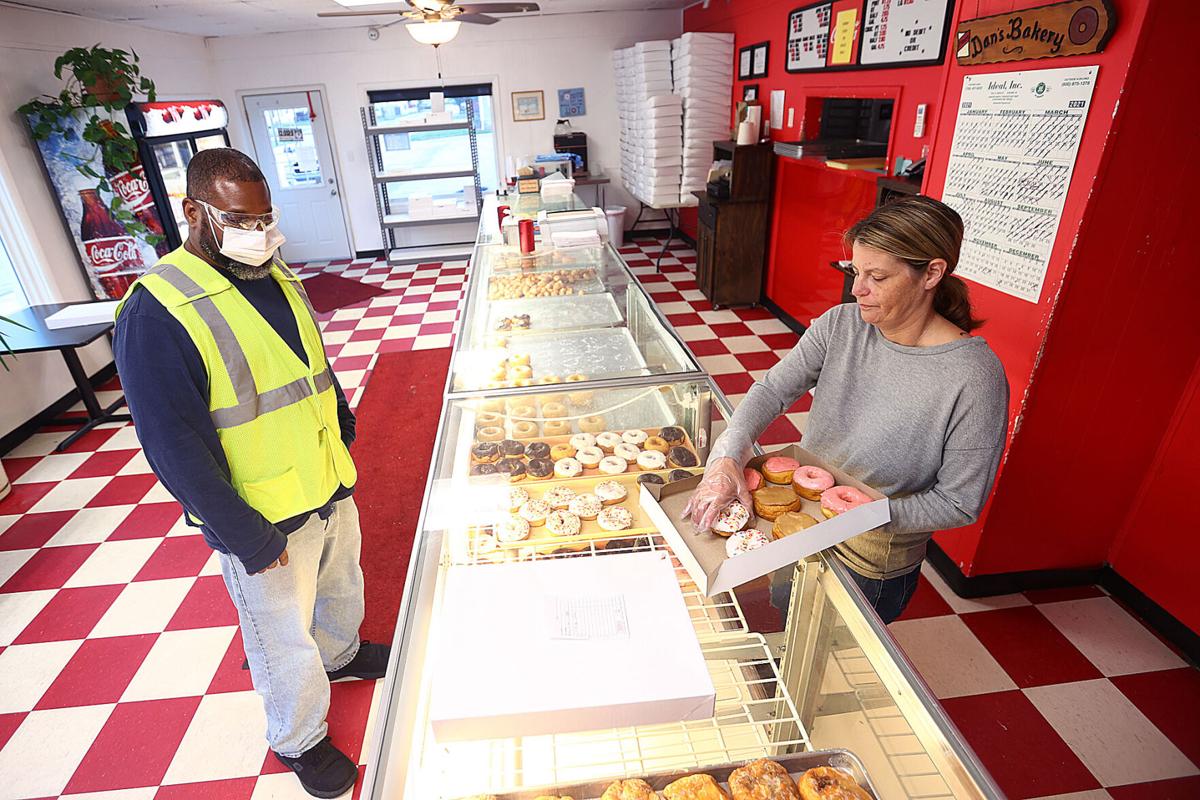 Saracco Morland has a box of doughnuts made up by Cari Armstrong at Dan’s Variety Bakery, commonly referred to as Dan’s Donuts. 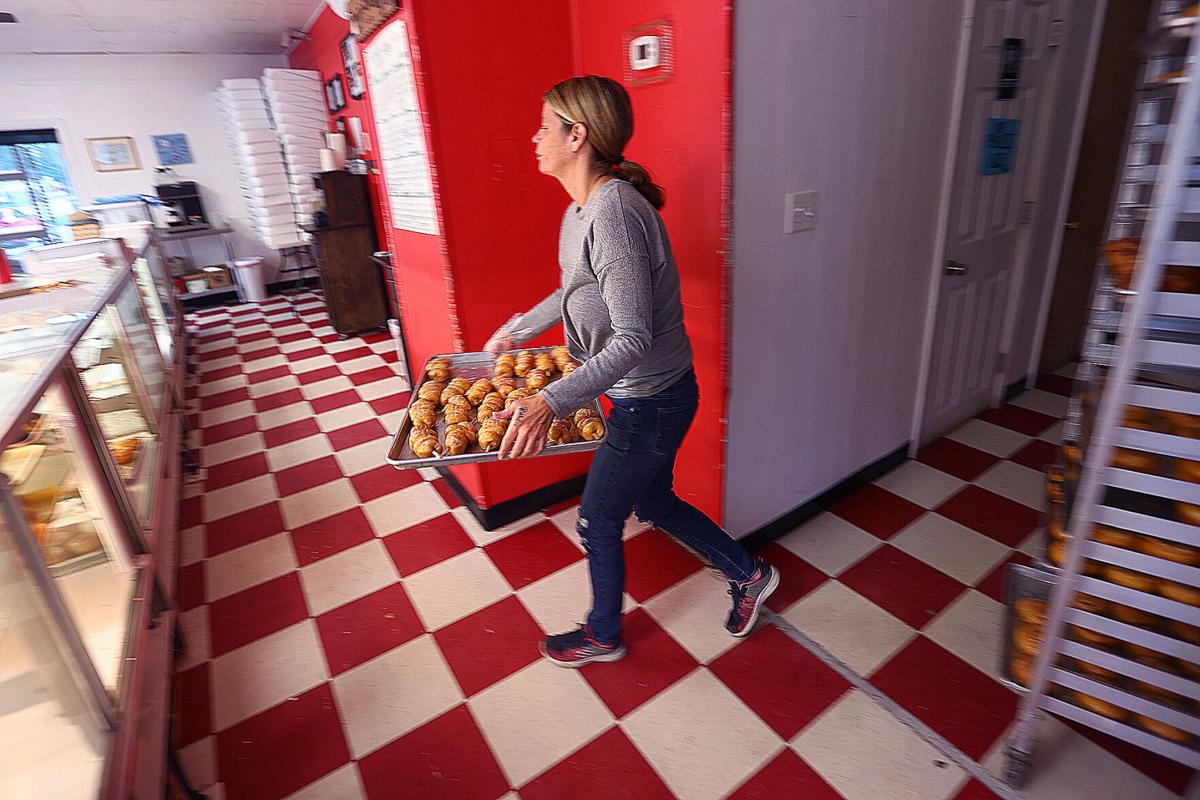 Cari Armstrong brings out a tray of doughnuts at Dan’s Variety Bakery, commonly referred to as Dan’s Donuts. 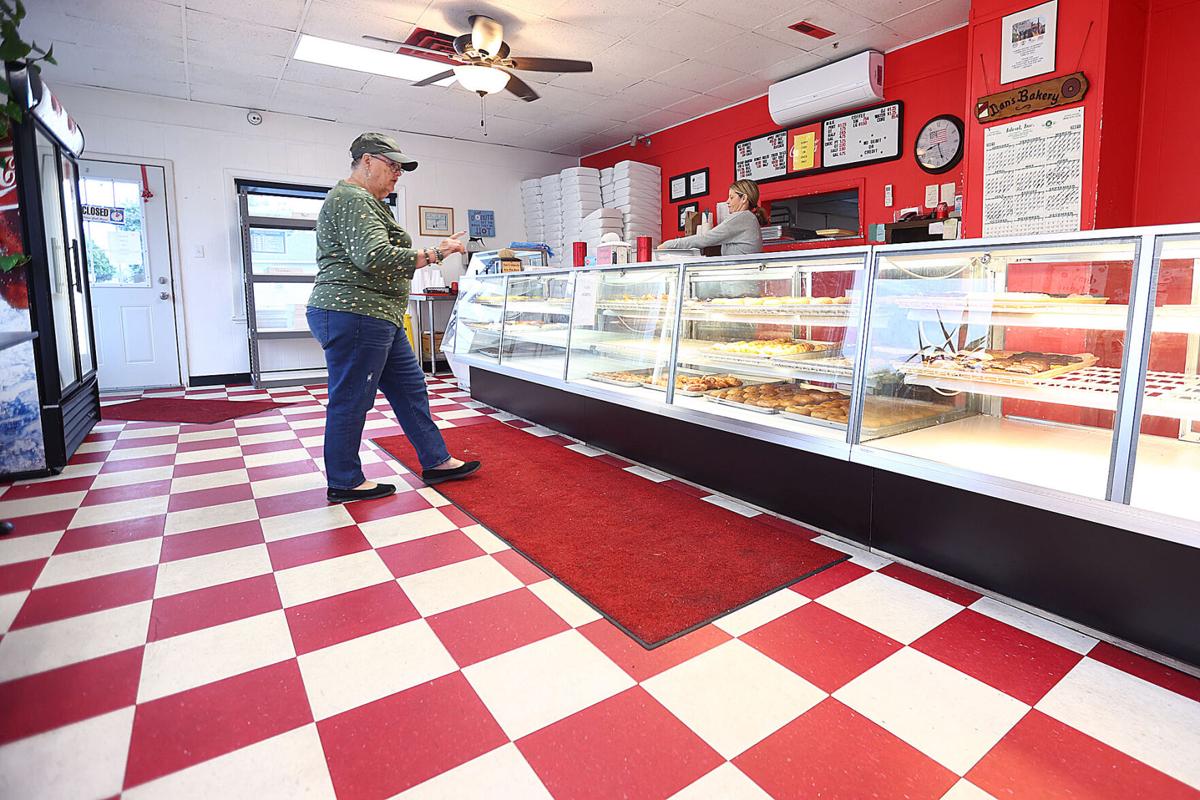 Sharon Bales picks and chooses the dozen doughnuts she is buying at Dan’s Variety Bakery commonly referred to as Dan’s Donuts. 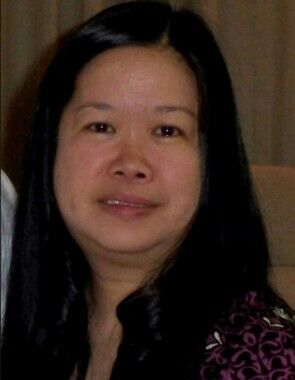 Saracco Morland has a box of doughnuts made up by Cari Armstrong at Dan’s Variety Bakery, commonly referred to as Dan’s Donuts.

Cari Armstrong brings out a tray of doughnuts at Dan’s Variety Bakery, commonly referred to as Dan’s Donuts.

Sharon Bales picks and chooses the dozen doughnuts she is buying at Dan’s Variety Bakery commonly referred to as Dan’s Donuts.

Donnie Haworth, her brother in-law, said that just like an engine, people didn’t see her much. But she was there, every day, checking out the cash register, paying the bills, writing down orders and making sure they were stocked with supplies.

But when Faye and her husband, Brian Haworth, who co-owned the business, both contracted COVID in July, the iconic Kokomo donut shop came to a grinding halt. For five weeks, the lights were off and the doors locked as the two battled the virus.

Brian ended up recovering and leaving the hospital. Faye didn’t.

On Saturday, the 52-year-old passed away at Ascension St. Vincent Hospital in Indianapolis after surviving on a ventilator for over six weeks.

“It’s been sad and terrible,” said Donnie, who has worked at his family’s bakery for decades. “We just try to get by day by day. You’ve just got to pick up the pieces and try to move on, so that’s what we’re doing.”

Dan’s ended up reopening the day after Labor Day. Faye was still in the hospital, but the family decided they needed to get the shop back up and running after closing for five weeks.

“We had to open up, because we were going crazy,” Donnie said. “Everyone was getting anxious just sitting around, and Faye wouldn’t want that.”

He said they really didn’t know what to expect when they reopened. Would people still show up after closing for so long?

On Tuesday night, the family unlocked the doors and greeted the horde of customers who lined up to get their sugar fix at their favorite local donut shop.

“It’s been something ever since,” Donnie said. “Business has been unbelievable. We’ve been blessed, and this community has been amazing.”

Not only did customers show up in droves, Donnie said, but all their employees also came back — even after five weeks without a job. He said that’s something not many businesses could say these days with the national worker shortage.

Brian and Faye’s two children also jumped on board to get the bakery back up and running and have been invaluable ever since, he said.

“We’re still a team, and that’s what it takes,” Donnie said.

But things aren’t the same at the shop without Faye, who also worked full time at the General Motors factory in Fort Wayne.

Donnie said that every day after her shift, she came in to write down orders, return phone calls, cash out the register and ensure they had all the baking supplies stocked up. On weekends, customers could find her working behind the counter.

Now, without her running the operation behind the scenes, the family is doing the best they can to keep the shop open and running.

“What happens when you take an engine out of the car?” Donnie said. “All I can say is we’re doing the best that we can. You don’t realize till someone’s gone what all they did. Now, I don’t know how Faye did it. She made it look so easy.”

Donnie said they have no plans of closing the bakery, but they’re trying to come up with a new game plan now that Faye is gone. But, he said, they know things will be alright, thanks to the loyal customers who have shown them support and love through it all.

Boyd Kirby is one of those loyal customers. He said he’s been coming to Dan’s every morning for over 30 years. These days, he meets with around 14 regulars in the morning to drink coffee, read the paper and shoot the breeze.

So when the shop closed in July, Boyd said he was at a loss.

“I tell you, all the guys who come in here, I missed them,” he said. “I really missed talking to them. I’m glad to be back here.”

And the bakery is happy to have him back, along with all their customers, Donnie said.

Services for Faye will be held at 1 p.m. Friday at Ellers Mortuary & Cremation Center Webster Chapel, with Pastor Joe David Wampler officiating. Friends and family may gather from 11 a.m. to 1 p.m. Entombment will follow in Sunset Memory Garden cemetery.