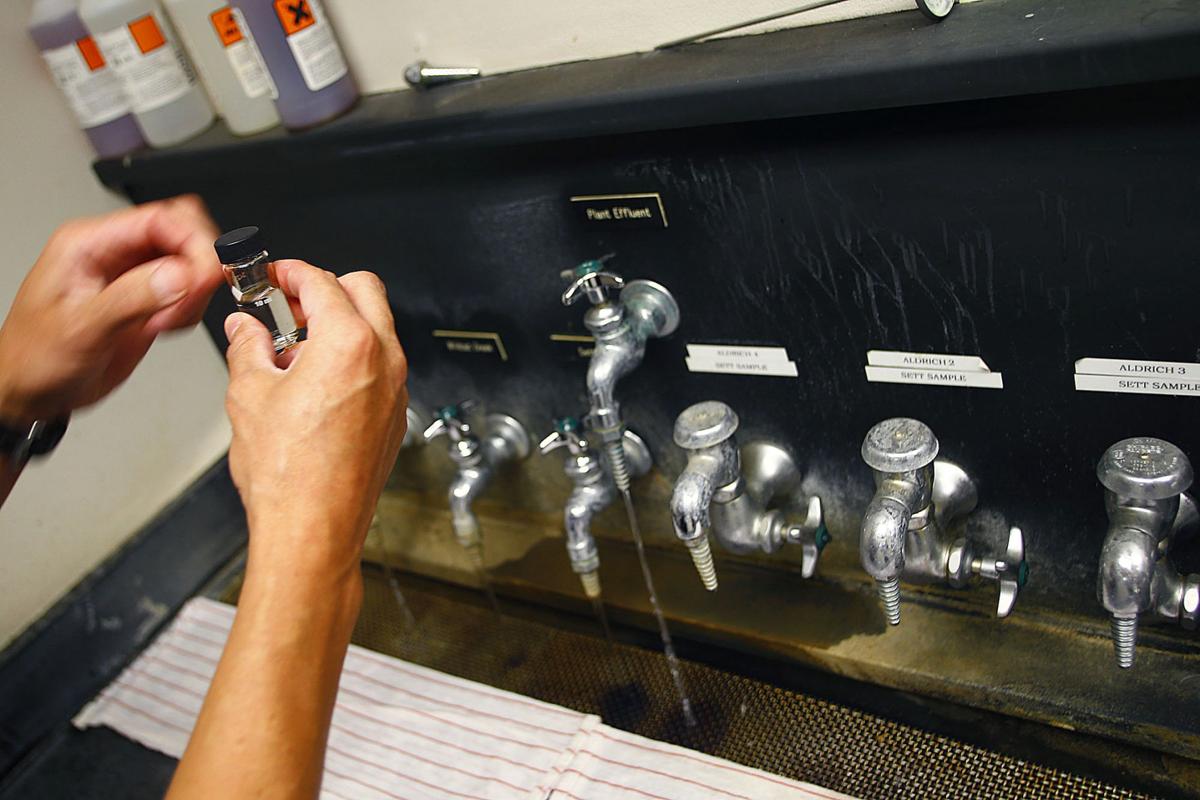 The plant operator test the water quality from all sources within the facility, which happens every 30 minutes at Indiana American Water Company. Tim Bath | Kokomo Tribune 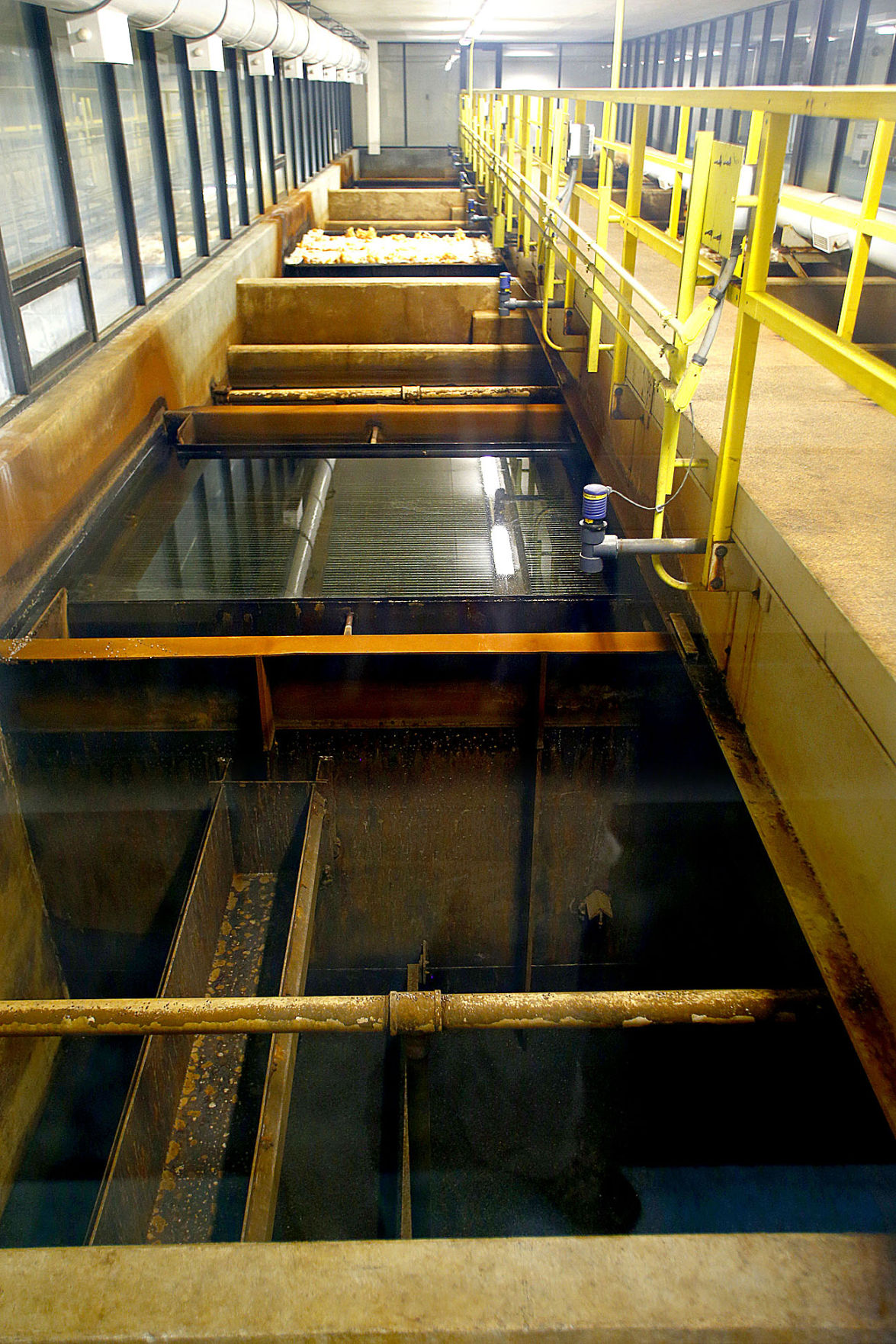 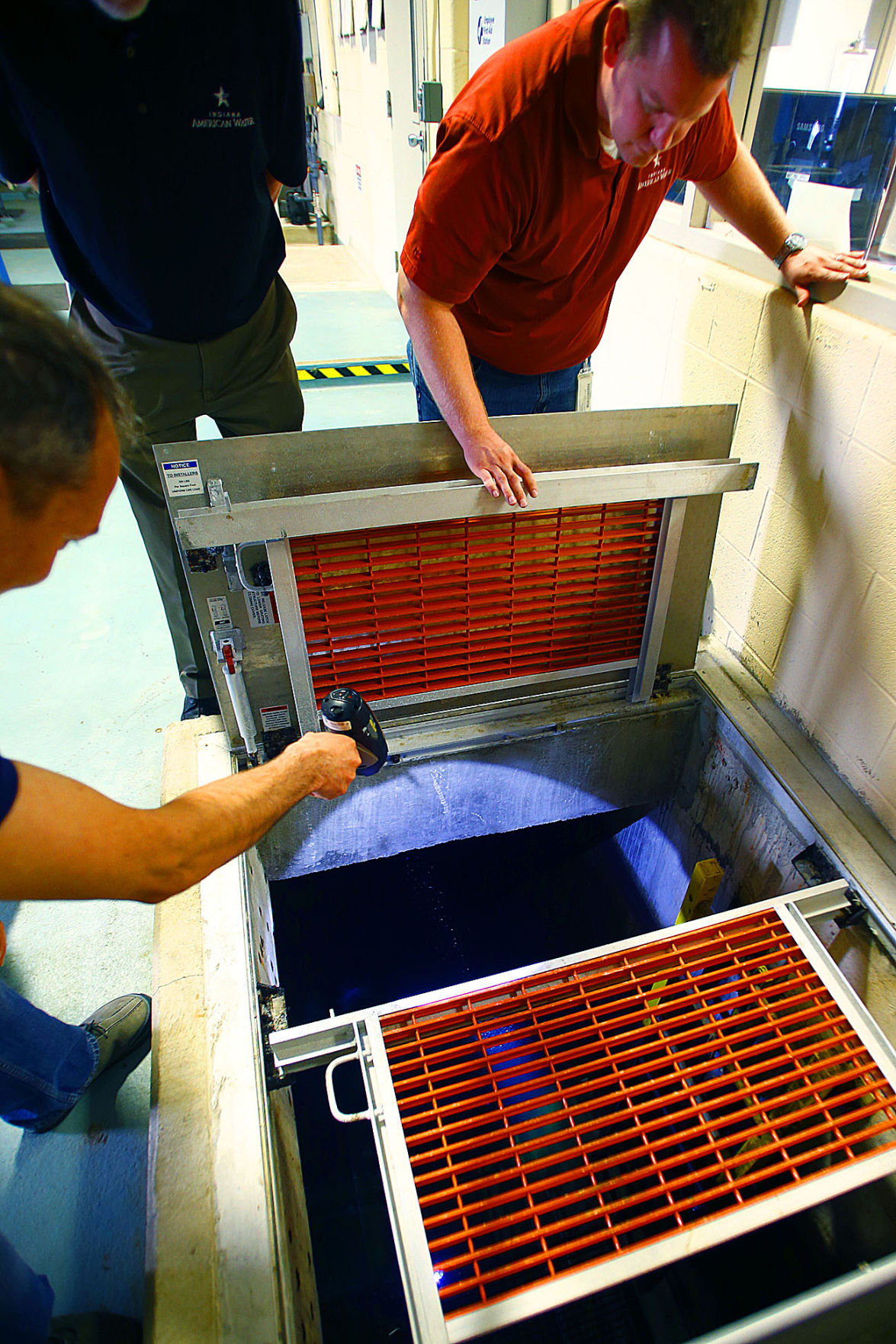 Officials at Indiana American Water Company check for the water purity inside the holding tanks beneath the treatment facility. Tim Bath | Kokomo Tribune 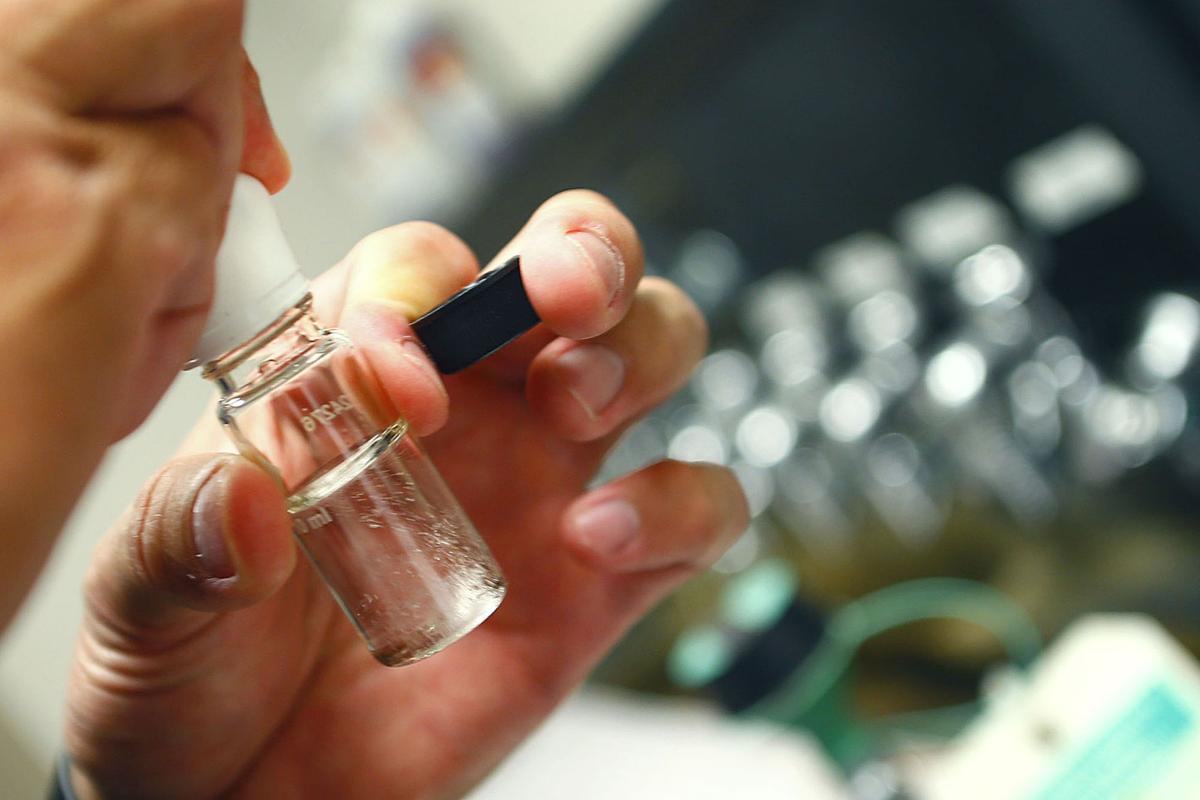 The plant operator at Indiana American Water tests a sample of water coming through the treatment facility, which he does every 30 minutes.. Tim Bath | Kokomo Tribune 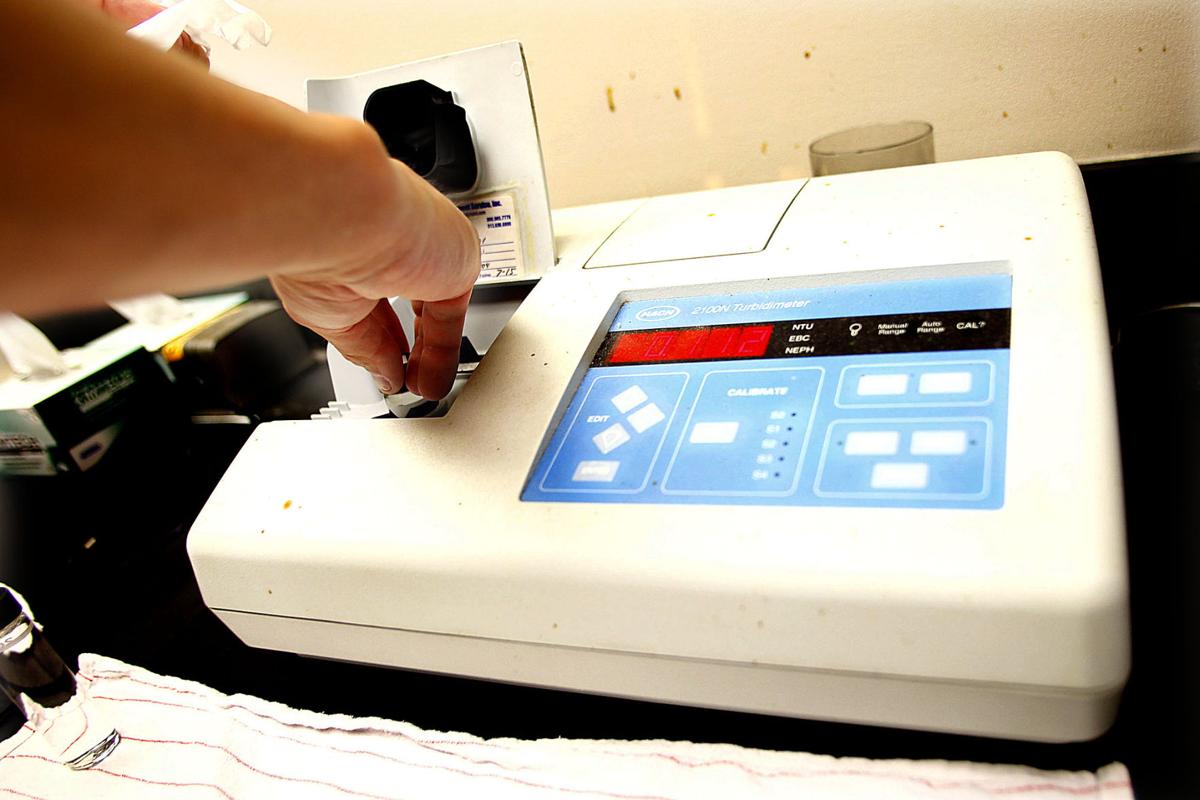 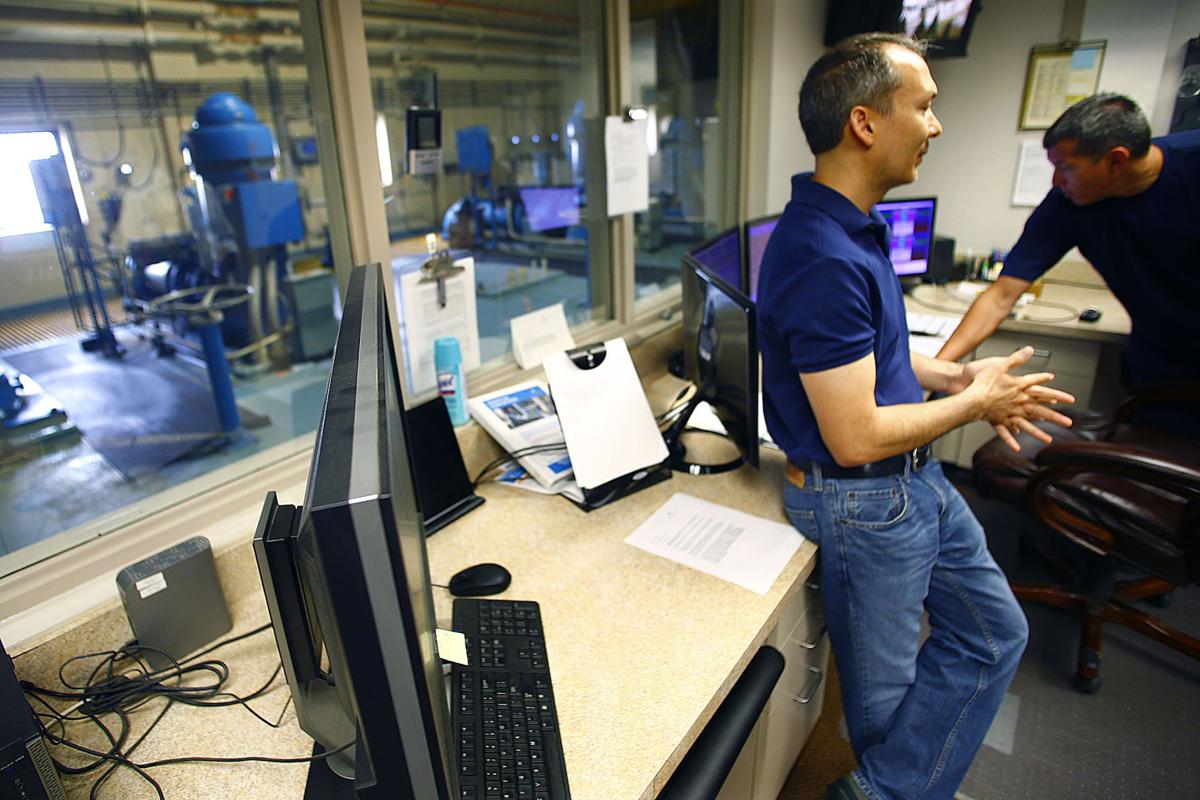 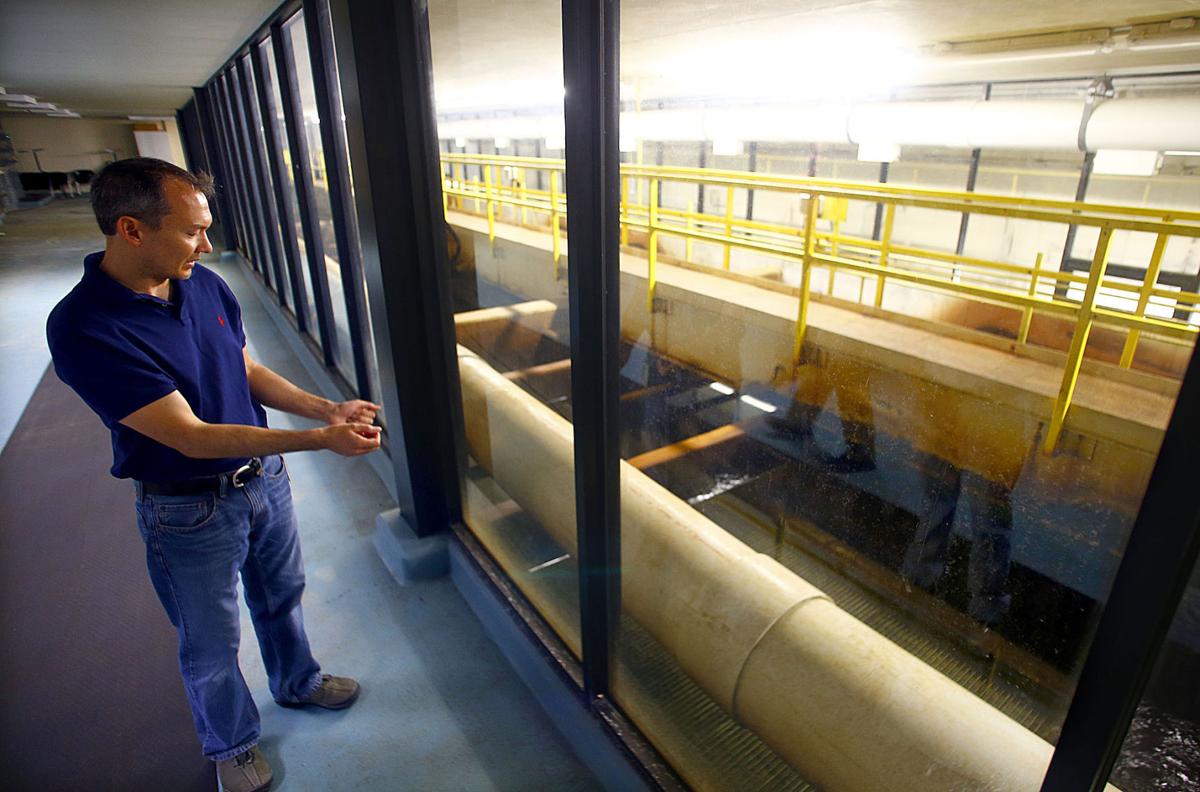 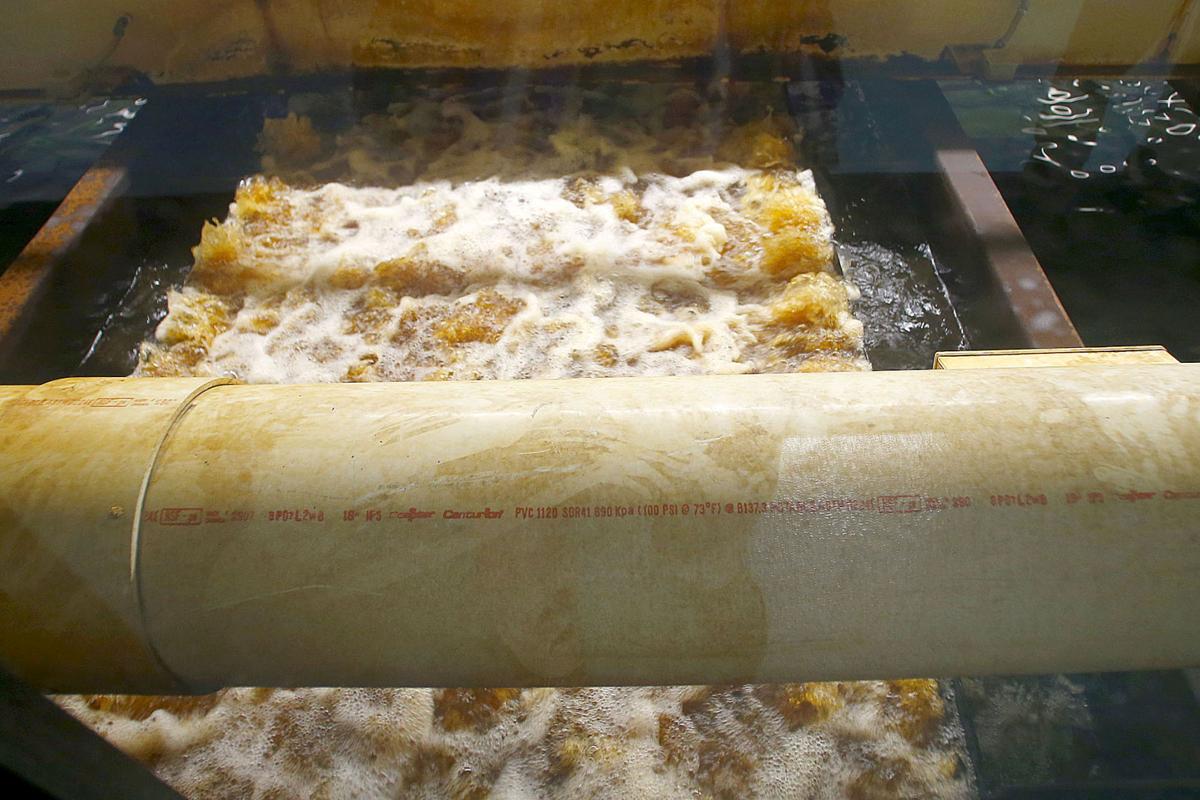 The upflow filters at Indiana American Water remove nuisance minerals like iron from the water that cause discoloration. Tim Bath | Kokomo Tribune

The plant operator test the water quality from all sources within the facility, which happens every 30 minutes at Indiana American Water Company. Tim Bath | Kokomo Tribune

Officials at Indiana American Water Company check for the water purity inside the holding tanks beneath the treatment facility. Tim Bath | Kokomo Tribune

The plant operator at Indiana American Water tests a sample of water coming through the treatment facility, which he does every 30 minutes.. Tim Bath | Kokomo Tribune

For around two decades, tests at the Indiana American Water treatment facility revealed groundwater beneath the city contained trace amounts of vinyl chloride, a manufactured chemical used in the production of plastic products and packaging materials.

American Water officials knew the industrial chemical was there, but there wasn’t much they could do about it besides clean it out of the city’s drinking water, just like any other contaminant.

But the true extent of the pollution was worse than anyone could have guessed.

In 2007, the Indiana Department of Environmental Management began testing the groundwater, which confirmed levels of vinyl chloride at four municipal wells at levels exceeding the EPA maximum contaminant level in raw water.

In 2011, more tests revealed one of the monitoring wells, which was not owned or used by Indiana American Water, had amounts of vinyl chloride that were more than 2,500 times the maximum level for drinking water.

In the end, IDEM determined the 294-acre water plume beneath the city that provides around 55,000 residents with drinking water was contaminated with the chemical.

But that’s all they knew. How it got to be so polluted in the first place remained a mystery.

Kirk Kuroiwa, water quality specilist for Indiana American Water, shines a light into the holding tanks beneath the treatment facility. The water is so clean you can see the bottom at more than 15 feet. Tim Bath | Kokomo Tribune

Now, officials with the EPA are on a mission to find out who, or what, is leaking the potentially toxic chemical into the city’s groundwater.

In March, the groundwater plume was placed on the EPA’s Superfund national program list, making it one of the federal government’s top priorities for cleanup and rehabilitation.

And the investigation has begun.

In its report to the EPA, IDEM identified 14 facilities within the city that handle solvents containing vinyl chloride that could be the source of the contamination.

Those facilities range from large factories such as Chrysler and Delphi, to small businesses like Hunt’s Salvage and Coal Yard and Wiese Collision Repair.

The EPA confirmed it has taken the first step in the investigation to identify those parties that may be responsible for the pollution.

That includes reviewing documents, site investigation and sampling, interviews, using "information request letters" to gather data, title searches and research on the Internet, as well as at libraries, courthouses and state offices.

Phillippa Cannon, a spokesperson for the EPA, said if the agency identifies potential polluters, they are asked to conduct a study to determine the nature and extent of contamination at the site, with oversight from the EPA.

“This is EPA’s ‘enforcement-first’ approach, which ensures that taxpayer money is not spent to address a cleanup site if responsible parties can do so,” she said in an email.

If the EPA can identify the culprit, the agency attempts to enter into a binding agreement in which the responsible party would investigate the nature and extent of site contamination. That process could take about a year, Cannon said.

If there are no responsible parties identified, the EPA will conduct the study.

Cannon said it projects the study will begin in early 2017 and take about a year or two to complete.

Kirk Kuroiwa, the water quality supervisor at the Indiana American Water treatment plant in Kokomo, said the fact that the EPA will either pick up the tab for the cleanup or attempt to get the culprit to pay for it is one of the biggest perks of getting the water plume on the Superfund list.

"This will get cleaned up, and it won’t be at the expense of this community."

“This means that regardless of whether they can determine a responsible party or not, this will get cleaned up, and it won’t be at the expense of this community,” he said. “It’s alleviating a potentially huge financial burden on this community.”

No matter what the investigation turns up, the end game is the same: Removing the vinyl chloride from the water plume and ensuring the city’s drinking water is free from industrial contaminants.

Purifying groundwater sounds like it should be a complicated undertaking, but it’s actually fairly simple, Cannon said.

“Cleaning up groundwater is not overly difficult, but it can be a long-term process,” she said.

Although the exact cleanup method won’t be known for some time, Cannon said, the EPA could take one or more of several basic approaches to cleaning up the plume.

The upflow filters at Indiana American Water remove nuisance minerals like iron from the water that cause discoloration. Tim Bath | Kokomo Tribune

One way would be to pump the contaminated water out of the ground and clean it in an above-ground treatment system, and then discharge the cleaned water into a local river.

Another approach would use biological or chemical means to treat the groundwater while it’s still under ground to destroy the pollutants.

A third option is to simply monitor the contaminant levels over time, since vinyl chloride will eventually break down and dissipate.

If a concentrated amount of the chemical is found that is acting as the source of the pollution, the EPA will look at ways to either remove the source or treat it in place.

“To reduce the contaminant to the low levels required by federal regulation, groundwater treatment systems usually continue to operate for many years after initial start up,” Cannon said. “However, EPA has a great deal of experience with each of the above three types of cleanup actions.”

The EPA also said groundwater contaminated with vinyl chloride is common at Superfund sites, and officials have access to the best practices learned from previous cleanups.

It could be years before the EPA eventually determines the best way to clean the plume. During that time, the water will remain contaminated. So what happens in the interim?

That’s where American Water steps in.

Water-quality supervisor Kuroiwa said the company has increased its vigilance to ensure the chemical stays out of residents’ drinking water.

“I’d say we’re more proactive than most municipalities. We’re testing the well water on a set schedule. It’s not just a one-and-done thing.”

That includes increased lab tests to discover what kinds of chemicals are in the water, and keeping an eye on the wells the utility uses to pump up the groundwater to make sure the levels of vinyl chloride aren’t increasing.

“I’d say we’re more proactive than most municipalities,” Kuroiwa said. “We’re testing the well water on a set schedule. It’s not just a one-and-done thing. We continue to monitor it.”

He said a big help in monitoring the water is the utility's in-house testing lab, which allows the water treatment plant to get results on water tests within a day. Utilities that use an outside lab can wait months for results, Kuroiwa said.

“Anytime I want sampling, I’m not limited by cost,” he said. “A lot of municipalities want to save money, so they do the bare minimum of testing. They also might have to wait months for results. Here, we have immediate turnaround on our samples.”

In reality, the polluted water plume hasn’t had much of an effect on the water treatment plant, Kuroiwa said.

Out of the 14 wells the utility uses to draw groundwater, tests show only three are currently pulling water tainted with trace amounts of vinyl chloride, he said.

The epicenter of the pollution, according to IDEM’s study, is about 1.5 miles south of downtown, which isn’t close to any of American Water’s wells.

“We feel like at the levels we’ve detected, we can manage it and remove it and meet all the drinking water standards,” Kuroiwa said. “It really hasn’t impacted us. We’re using existing treatment we already had on site and just doing increased monitoring.”

The biggest concern now, he said, is for residents within city limits who use a private well for drinking water.

Although there aren’t a lot, Kuroiwa said he knows there are definitely pockets of houses that are drawing potentially polluted water.

"I have serious concerns for those who are drawing from the plume from private wells."

“I have serious concerns for those who are drawing from the plume from private wells,” he said.

Kuroiwa encouraged anyone with a private well within city limits to have their water tested by a certified lab to see if it may contain vinyl chloride, or consider hooking up to American Water.

In the end, the EPA will be in charge of ensuring the groundwater plume gets cleaned up, he said. But in the meantime, Kuroiwa hopes people take away a lesson from the process.

“At the least, this is increasing awareness that things people or companies do in the community could potentially end up in your drinking water,” he said. “Hopefully this encourages people to protect the environment, because the activities that happen in your community affect the food you eat, the air you breathe and the water you drink.”

City's water is safe to drink

A nearly 300-acre groundwater plume that provides around 55,000 city residents with drinking…

What is vinyl chloride?