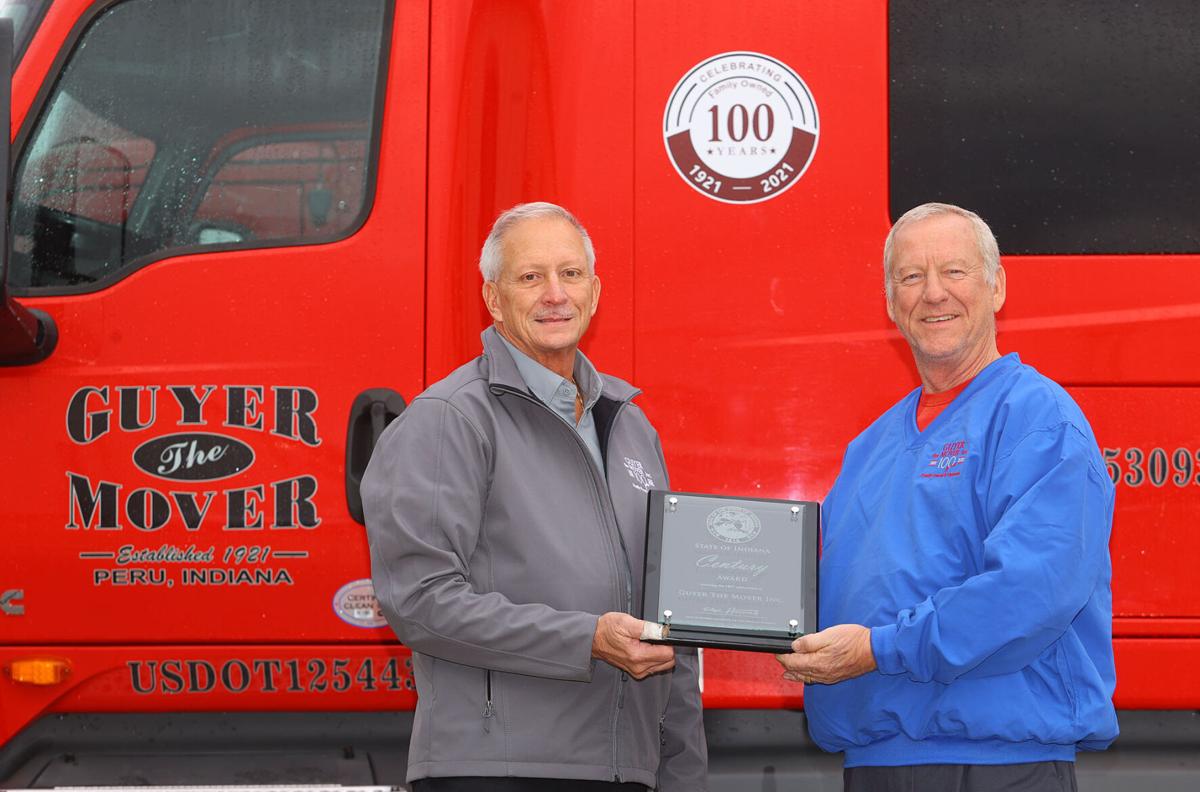 John and Charlie Guyer, first cousins, with their century business award on Thursday, are the current owners of Guyer the Mover. The Peru-based business has remained in the same family for 100 years. 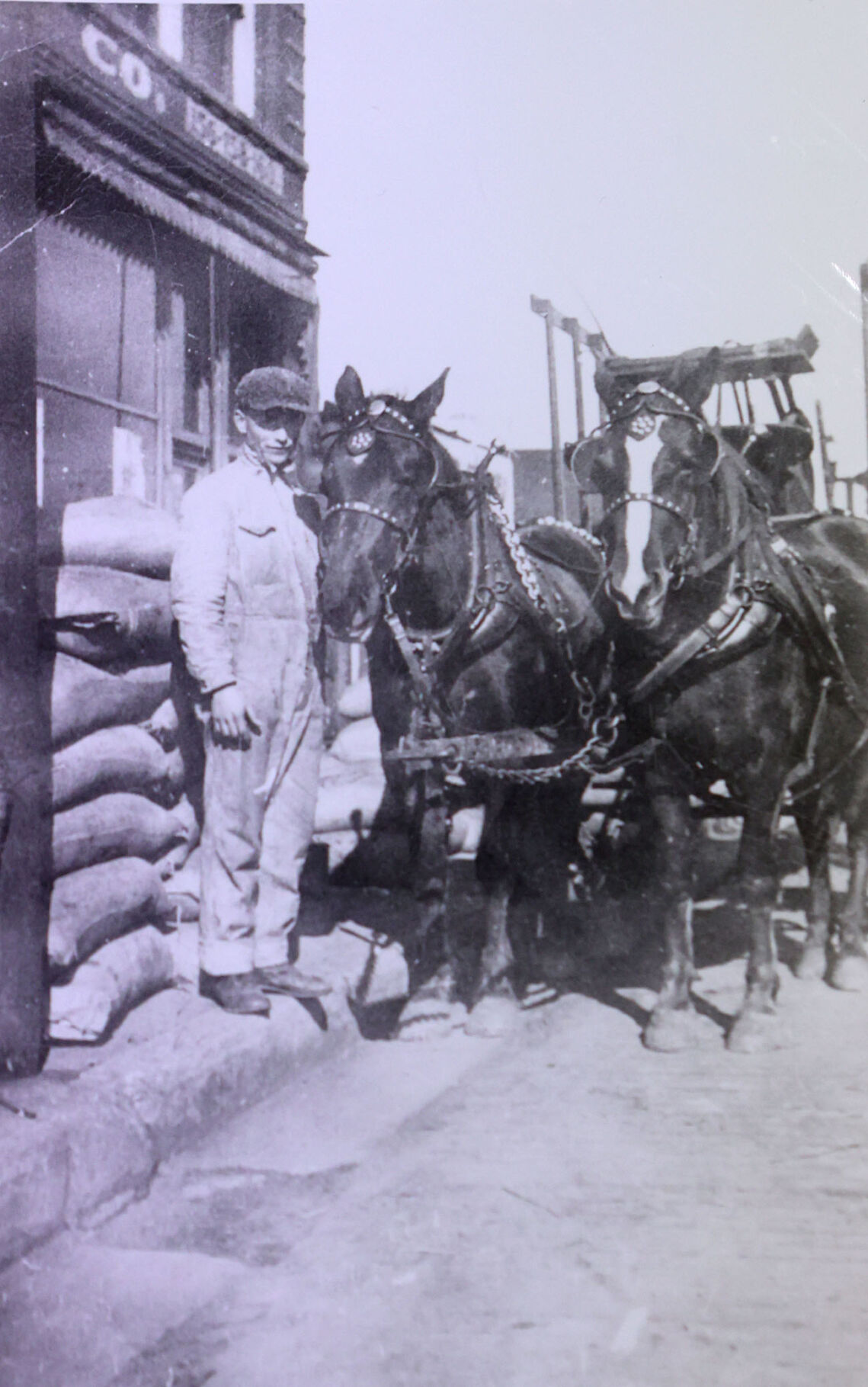 Paul Guyer began Guyer the Mover in 1921. The Peru-based business has remained in the same family for 100 years. 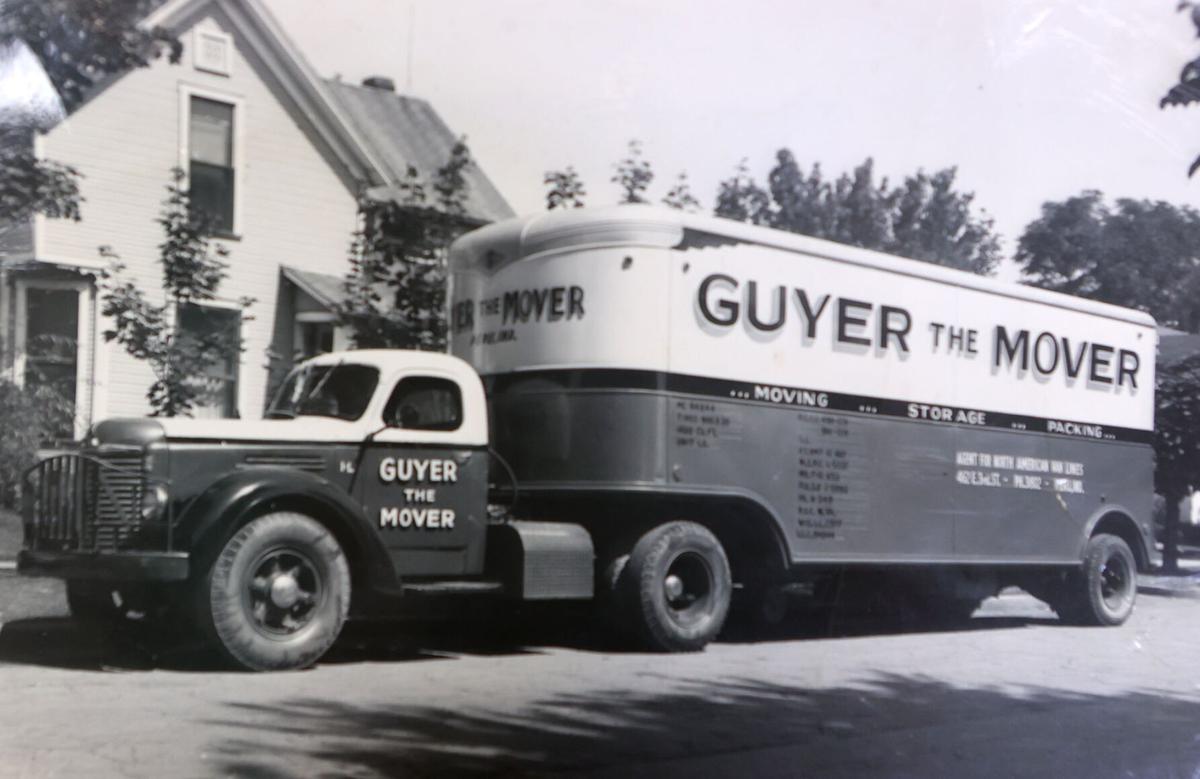 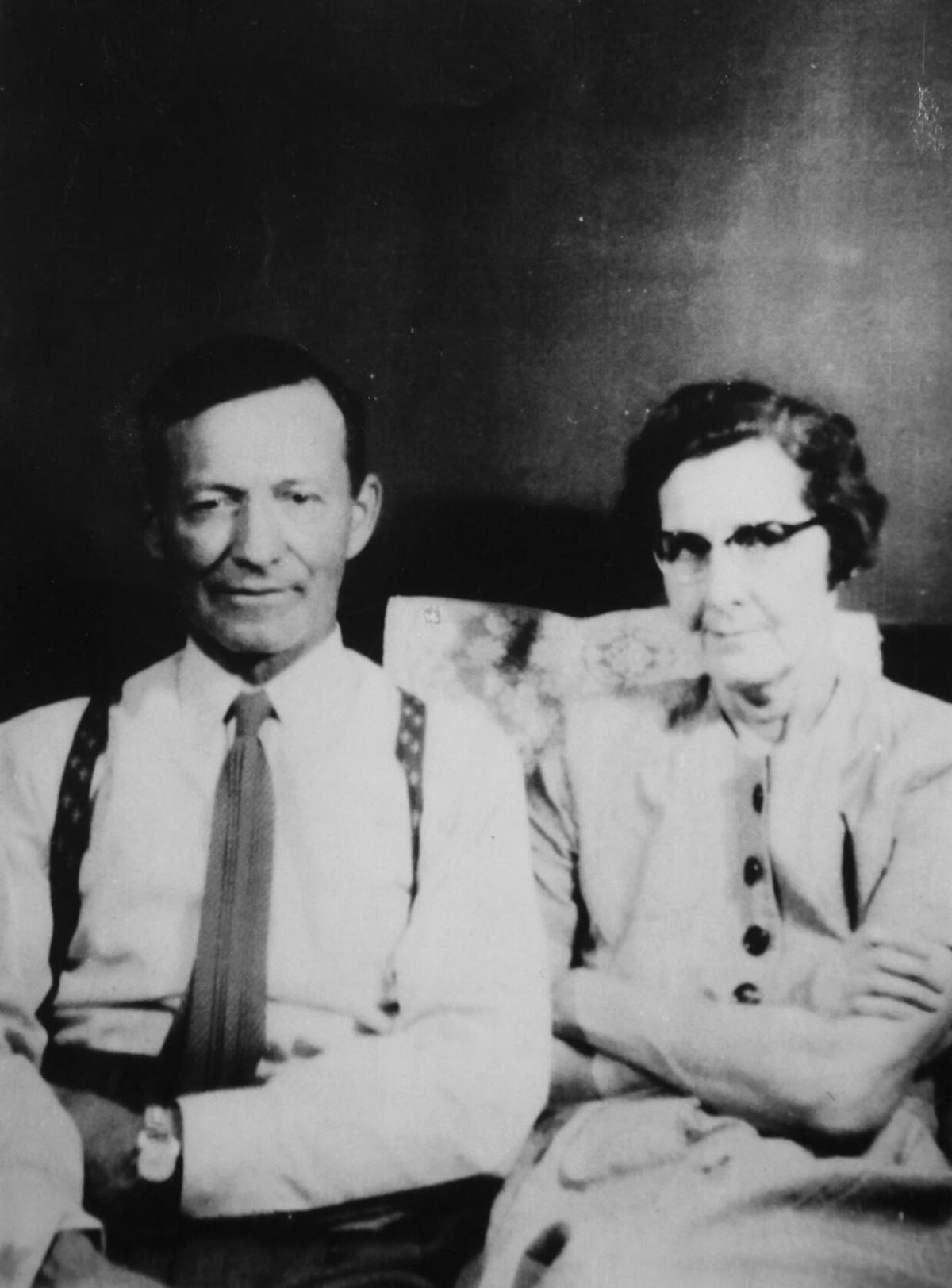 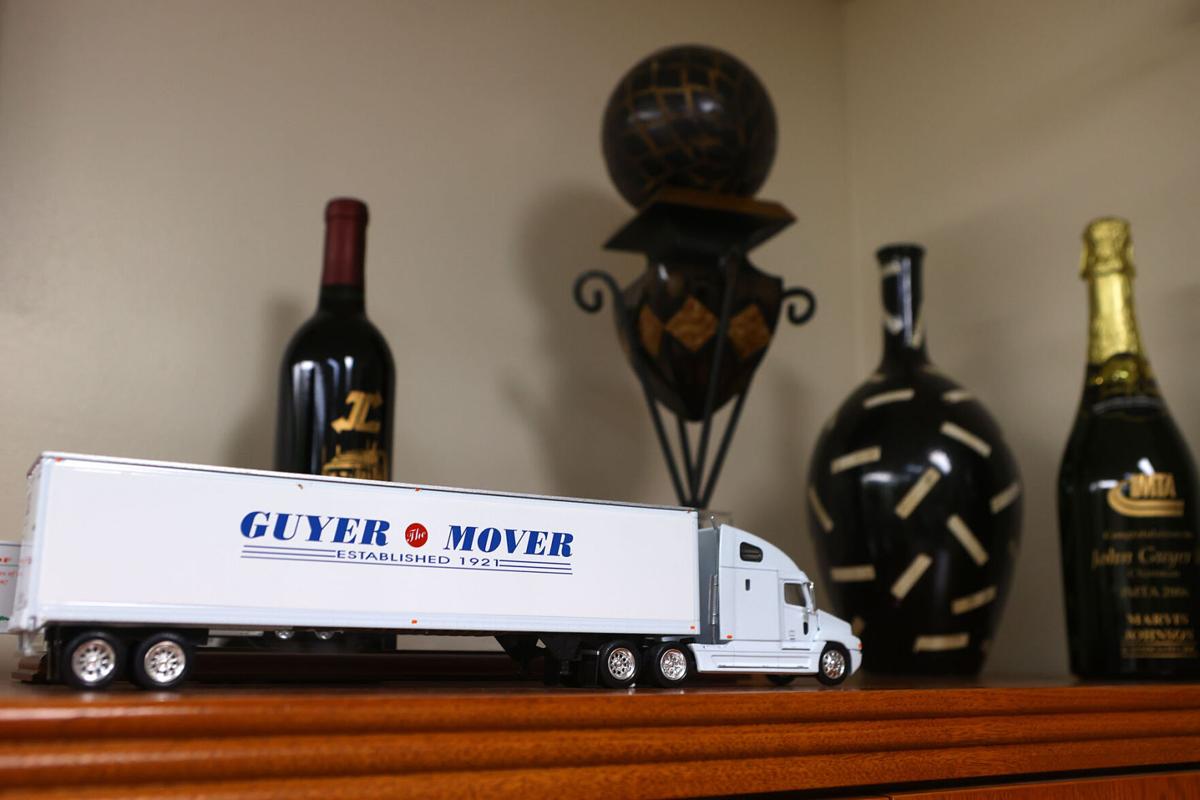 Model Guyer the Mover trucks are on display in the company's office. The Peru-based business is celebrating 100 years. 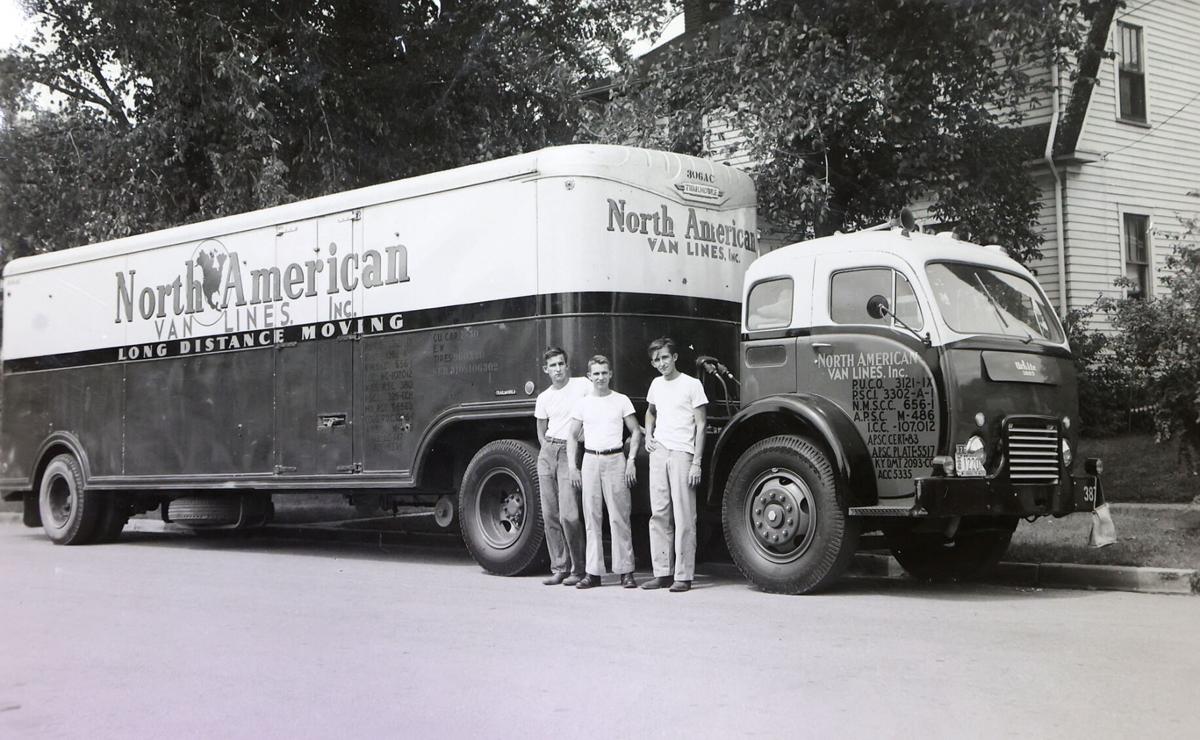 In this provided photo, Guyer the Mover employees are shown in the 1950s.

John and Charlie Guyer, first cousins, with their century business award on Thursday, are the current owners of Guyer the Mover. The Peru-based business has remained in the same family for 100 years.

Model Guyer the Mover trucks are on display in the company's office. The Peru-based business is celebrating 100 years.

In this provided photo, Guyer the Mover employees are shown in the 1950s.

PERU — Paul Guyer was 18 when he decided to start a moving company. It was 1921, and he had just two horses and a wagon to haul the ice and animal feed that came off the trains stopping in Peru.

One hundred years later, his company still exists in Peru. It’s called Guyer the Mover, and it’s operated by two of his grandsons.

Instead of two horses, the company runs 50 semis all across the U.S. and Canada. They employ 30 people and own around 100,000 square feet of warehouse and storage space in Peru, Kokomo and Warsaw.

The business has hauled prototype cars produced by Delphi Electronics with technology decades ahead of its time. They’ve hauled airplanes for then-Bunker Hill Air Force Base.

Now, they’re one of the few family-owned moving companies left in the Midwest and have become part of the fabric of Peru’s business community.

John Guyer, who today runs the business with his cousin, Charlie, said it’s unlikely his grandpa ever imagined his one-man operation would one day celebrate a century of success.

“I’m sure when my grandpa started this when he was 18 or 19, the idea of being around 100 years was never on the map,” John said. “But that’s really how it began. He just moved stuff around. Then it went from horses to trucks. One thing just led to another.”

That achievement this year landed the company a Century Business Award from Gov. Eric Holcomb, who honored over 30 companies during a ceremony in June. The award recognizes each company’s longevity and service to its employees, community and the state.

John said it was an honor to receive the award, but it didn’t come easy. He said that over the past 100 years, the company has gone through a multitude of economic and financial downturns that threatened to close their doors for good.

But that never happened, thanks to the foresight and planning from three generations of the Guyer family, who embraced the idea of diversifying their operations and adapting to the times.

Today, Guyer the Mover has its hand in a number of ventures. A big part of the business is hauling exhibitions to conventions and events in places like Las Vegas and Florida. They still do a lot home moving as well.

Their warehousing space has also become fundamental to the operation, where they lease space for other businesses to house new products, such as metal or furniture.

That’s a far cry from their business model 50 years ago, when one of their biggest clients was then-Grissom Air Force Base. John said that most of their income came from moving the thousands of military families on and off the base. But that all dried up when Grissom realigned as a reserve base in 1994.

Rolling with the economic punches is something John said he learned early on from watching his family run the business.

By 1952, his grandfather had left the company. That’s when his grandmother, Nira, took over operations until she unexpectedly died in 1971. John said it was almost unheard of at the time for a woman to run a moving company, but she was feisty enough to get the job done.

Paul and Nira ended up having 10 kids — seven boys and three girls — who all helped out with the business over the years. When Nira passed away, the company went to the boys, who one by one ended up moving on to other ventures.

John said his dad and two of his uncles eventually were left in charge until he and Charlie took over the reigns. He said stepping into the role was a no-brainer, except for a brief stint when he contemplated becoming a firefighter like one of his uncles.

But the pull of the business was too strong to resist, John said.

“The fact that my dad was in this, it just made you never really consider much else,” he said. “It’s always been in our blood. It’s what we know.”

That drive and inherited business savvy is what’s kept Guyer the Mover in the same family for 100 years, making it a rarity in today’s hyper-competitive moving market.

John said that in the 1970s, every moving company was family-owned, including four well-established businesses in Kokomo. But by the early ‘80s, those businesses started to fold or merge with other companies, such as U-Haul and Penske, who looked to expand their national reach.

He said the main reason many of those companies sold out or closed was that no one in the family wanted to take over. But that’s not been the case with Guyer the Mover.

Now, at 63, John said his son is in line to take over the company when he and Charlie decide to step down, moving the business into the fourth generation of the family.

But even then, John said, he’ll never really be able to step away from the company. He said it’s been his life for over 40 years, and after that long, it’s just part of his DNA.

“It’s absolutely a lifestyle,” John said. “I think I’ll probably retire when I die, so I hope I don’t retire any time soon.”