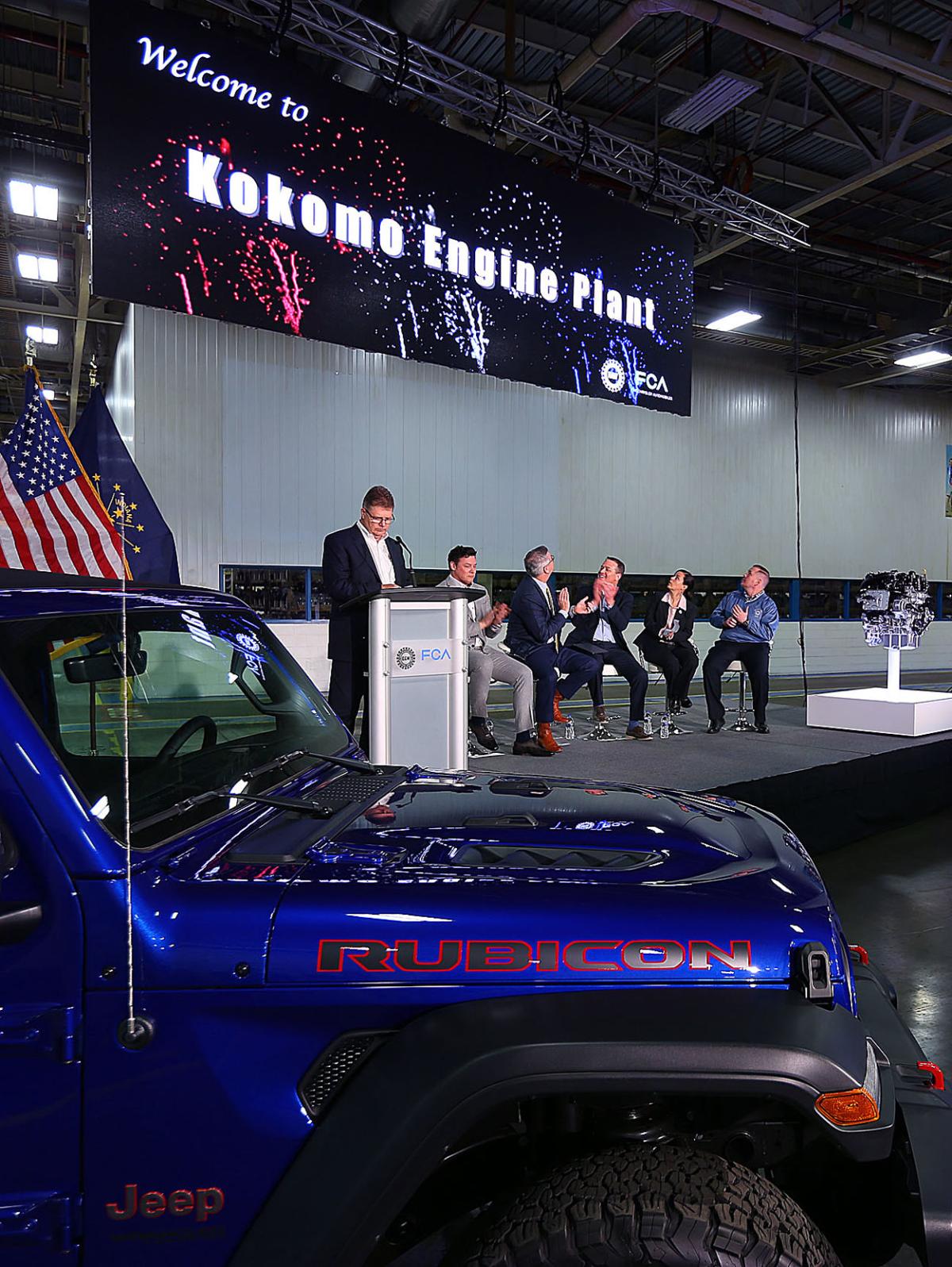 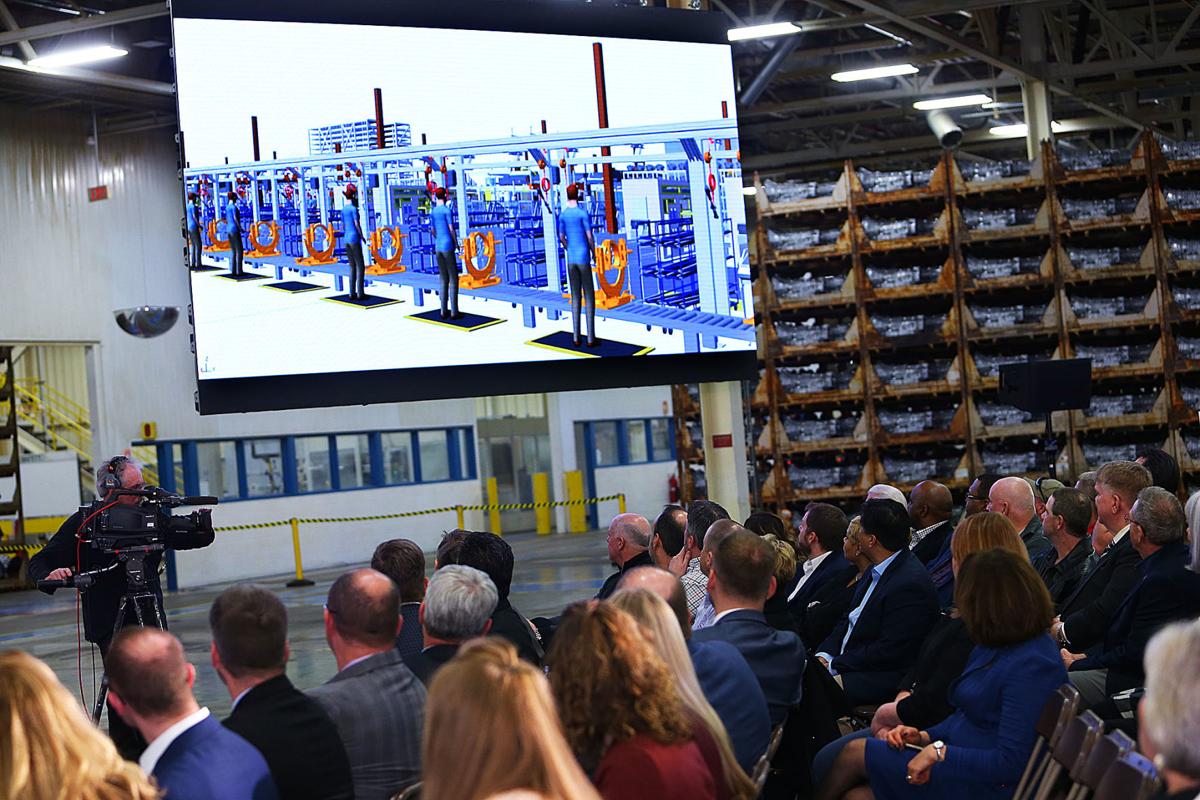 Attendees watch a video overview of the plant and what it will look like. The plant is currently being used for storage of transmissions only while the old equipment is being removed. 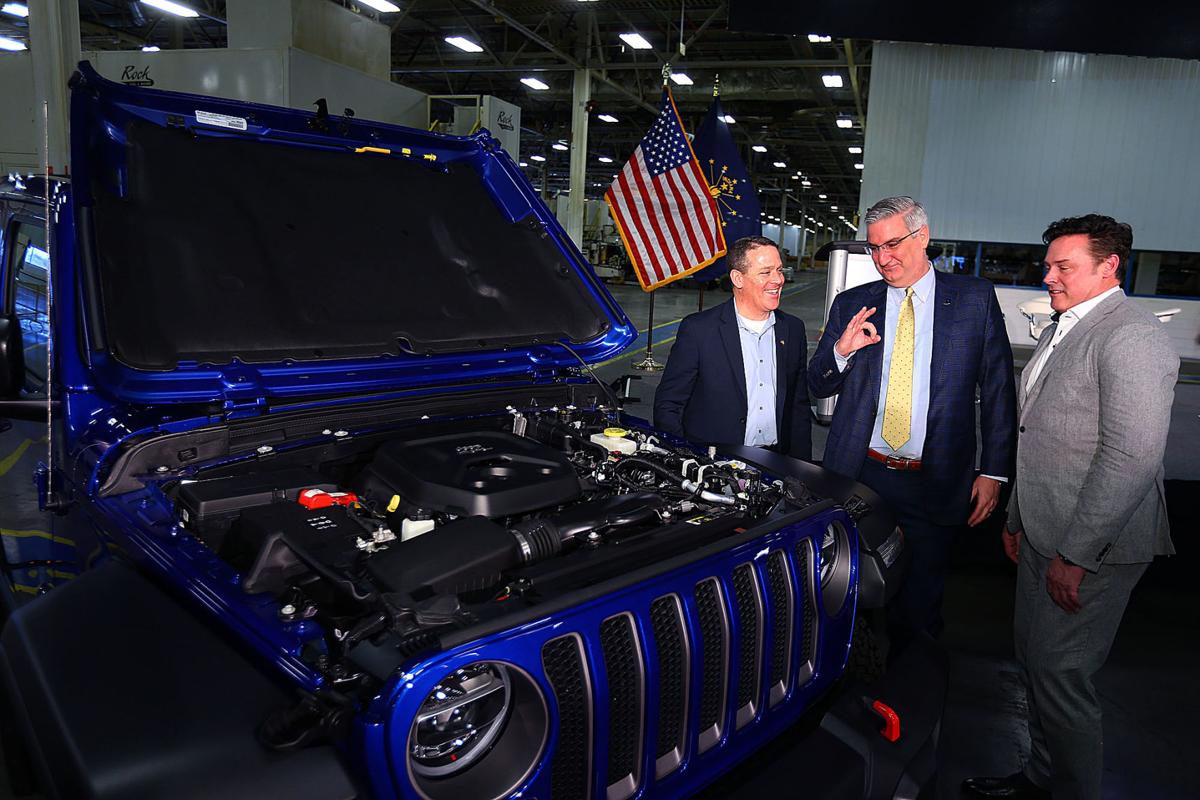 Mayor Tyler Moore, Gov. Eric Holcomb and COO of FCA NA Mark Stewart talk about the engine and the Jeep Rubicon that it is in.

Attendees watch a video overview of the plant and what it will look like. The plant is currently being used for storage of transmissions only while the old equipment is being removed.

Mayor Tyler Moore, Gov. Eric Holcomb and COO of FCA NA Mark Stewart talk about the engine and the Jeep Rubicon that it is in.

That’s what a crowd did Thursday afternoon inside the 600,000-square-foot facility on north Ind. 931, where leaders with Fiat Chrysler Automobiles publicly confirmed that the now-idle plant will begin making the Global Medium Engine Turbo 4 (GMET4).

The move marks a $400 million investment in the facility that will retain about 1,000 jobs and add nearly 200 more, bringing the total FCA employment in Indiana to over 8,300.

Now, the facility will be the source of all U.S. production of the engine, which is currently being built in Termoli, Italy. Production is expected to begin in the second quarter of 2021.

Brad Clark, vice president and head of engine and transmission manufacturing for FCA North America, said the plant had made nearly 4 million transmissions from 2003 to 2018, when the company began to shutter the facility. It sat idle for the last few months.

Mark Stewart, chief operating officer for FCA North America, said the plant served a long life building transmissions, but the company is now repurposing it for the next generation of engines. The facility will be called the Kokomo Engine Plant.

That engine is currently an option in the Jeep Wrangler and Cherokee, one of the company’s most iconic brands. A 2020 Wrangler was on display inside the facility, its hood popped open showing off the GMET4 inside.

Stewart said that engine is one of FCA’s most fuel efficient, but still offers 270 horsepower and 295 pounds of torque, along with low emissions.

“It’s an amazing, amazing turbo-4 engine,” he told the crowd. “It gives our customers the torque and the power that they love in our engine, and one that is super fuel efficient.”

But the GMET4 will also play a pivotal part in expanding FCA’s electric engine options, Stewart said, since a significant number of new technologies can be applied to it, making it relevant for future developments.

“It will play an important role in our plans to offer electric engine options across 30 nameplates that FCA will bring to markets around the world by 2022,” he said.

The announcement and name change of the facility was attended by a horde of local and state officials, including Gov. Eric Holcomb.

Holcomb told the crowd that Indiana is grateful to FCA for choosing Kokomo to invest in the plant and bring new jobs to the state.

“I’m a little biased, but I think it was the wisest decision you could have made,” he added, getting a chuckle from the crowd.

Kokomo Mayor Tyler Moore also thanked the company for bringing production of the engine to the former transmission plant. He said the investment will be a boon for the area’s economy.

“This is truly a great day not just for Fiat Chrysler, but for Kokomo and Howard County as a whole, but most especially for the local workforce that will benefit from this,” he said. “ ... The future success of Fiat Chrysler, like its past success, will continue to invigorate our economy and be felt by everyone.”

The Kokomo Common Council helped attract the company’s investment by approving a 10-year, step-down abatement, starting at 100% in the first year and lowering by 10% each subsequent year.

The local tax abatement joined a slew of other, state-level incentives offered to FCA, including incentives related to job training; performance-based tax credits hinged on whether the company hires Hoosiers; redevelopment credits meant to incentivize work on vacant property; and more.

Stewart said FCA was proud to work with local and state leaders to make the facility renovation work, and said the company felt good about investing in Kokomo.

“We’re very excited – pun intended – to be an economic engine to help this community thrive and help the next generation and help all of us together as a family,” he said.

But company and elected officials all agreed the investment was only possible because of the local workforce, which fought for the new engine line and proved they can make anything, and make it well.

Cindy Estrada, vice president and director of the FCA department for the United Auto Workers, said the local union membership was vital in the company’s decision to invest in Kokomo.

“I’ve learned one thing in my time as vice president of the UAW, and that’s one of the strongest memberships that we have, who fight for product and fight for workers’ rights, is the Kokomo membership,” she said “ ... This wouldn’t be possible without the quality they bring.”

“Our employees have risen to every challenge that’s been put in front of them, exceeding all expectations,” he said. “ ... This is a great day for Kokomo as we diversify our operations and bring additional opportunities to this region.”