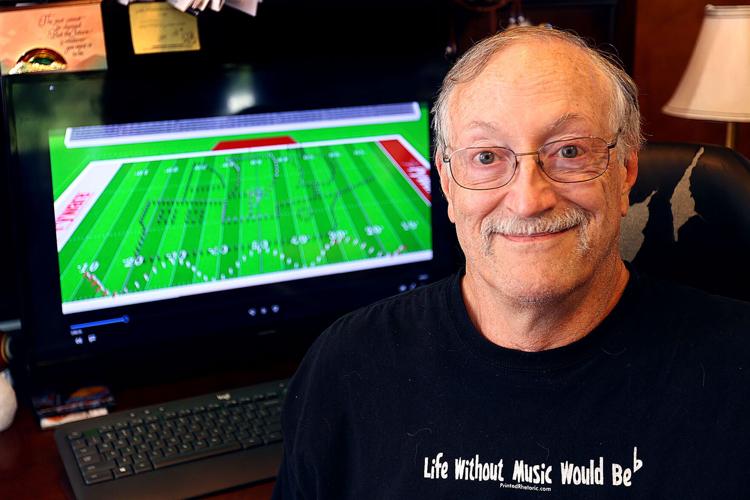 Alan Temby is shown Sept. 8 in front of the computer he uses to create band shows for both high school and college marching bands. 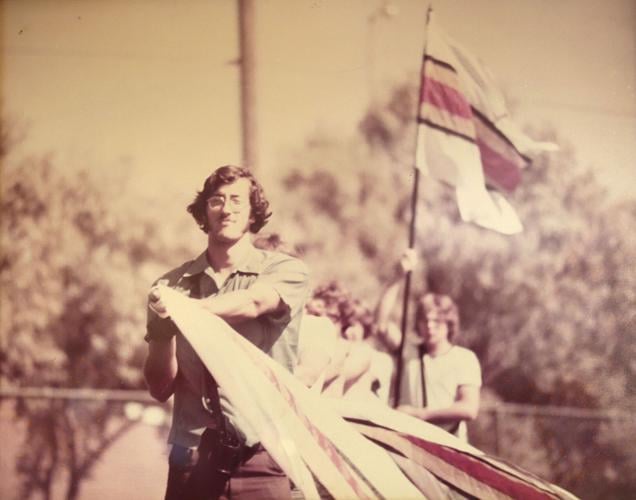 Alan Temby, who now creates band shows for both high school and college marching bands, performs with the color guard in the ‘70s.

Alan Temby is shown Sept. 8 in front of the computer he uses to create band shows for both high school and college marching bands.

Alan Temby, who now creates band shows for both high school and college marching bands, performs with the color guard in the ‘70s.

Sitting in a room with at least 10 different chess boards and what his wife calls a “shrine” of Green Bay Packers memorabilia, Alan Temby has made a living off marching band shows.

This year, he wrote the marching drills for 44 schools: three universities — University of Mississippi, University of Illinois and his alma mater, University of Wisconsin — and 41 high schools scattered across the nation.

“I’m kind of excited, even though it’s a different style than I’m used to writing,” Temby said of his work with the University of Wisconsin. It’s his first time writing for his alma mater.

Temby marched for the Madison Scout Drum and Bugle Corps for three years. In 1975, just before Temby aged out of the group, the Madison Scouts won the Drum Corps International World Championship. He still wears the champion ring.

After aging out of the Drum and Bugle Corps, he was invited by a fellow Madison Scouts graduate to teach color guard at Haworth High School in Kokomo. Temby agreed, not yet knowing the camp would be his first opportunity to write a marching drill.

He hadn’t heard of the school before, but was happy to work with the defending state high school champions.

Looking back, Temby said the first Haworth High School band camp was one of the longest weeks in his life.

Coming from an all-male color guard, he was nervous to teach young women for the first time. The drill hadn’t been written yet, either.

Although Temby had imagined his own drills, he hadn’t received much formal training writing the routines that marching bands perform on football fields. Lance Lovejoy, who Temby met at the Haworth band camp, invited Temby to collaborate on Haworth’s show. Temby wrote the color guard’s drill while the more experienced Lovejoy wrote for the rest of the band.

Three years of collaboration later, Temby decided to try writing drills on his own in 1978.

“I thought, ‘I guess I can do this,’” Temby remembered. From there, he slowly picked up more clients across the country. In total, Temby estimated, he’s written for schools in at least 12 states.

“His dad kept waiting for him to get a real job,” Sherry Temby, the drill writer’s wife, said of Temby’s 45-year career.

The 2017 Illinois University show, based on Pirates of the Caribbean, is one of his personal favorites he’s written.

Drill writing has evolved since Temby first started writing marching band shows. In the ‘70s, he explained, he used a 3-by-5-feet board with push pins to design shows. Using the board as a reference, he would then have to sketch and chart each performer’s coordinates.

Then he would have to make copies and mail the charts to whichever school he was writing for. Often, he said, the charts would be sent through overnight post.

“It was a lot more long and drawn out than it is now,” Temby said.

Now, everything is digital.

Temby admitted he fought the transition to writing drills online at first. He was concerned that the computer programs wouldn’t be as effective as his traditional methods. But as technology progressed, the software became more user friendly.

“I can send down movies so they can see what it’s going to look like. I can send them the drill charts and coordinates for each student and email with the band directors,” Temby said. “I don’t have to leave my chair.”

The drill that Temby writes often depends on the skill and size of the band he’s writing for. Different regions also prefer different styles, he added.

Other than the methodology of drill writing, show styles have also changed since the ‘70s, Temby said.

For example, brass instruments such as trumpets, French horns and trombones used to be placed closer to the sidelines. Now, as music is written with more 16th-note runs in the woodwind sections, the flutes, clarinets and saxophones are given prime real estate on football fields.

Special effects and staging have also made their way into marching shows.

Although Temby isn’t particularly excited about the props that have increased in popularity, he recognized the beneficial utility they can offer to smaller bands that need to fill a football field.

Temby starts writing each drill by reviewing the musical score and music band directors send him. He then marks musical phrasing and tempo changes on his drill-writing software.

Once the most impactful moments are mapped out, he’s able to start coming up with ideas. Usually, he said, he starts with the first major impact and works backward.

“The main thing is to portray the music through visuals,” Temby said. “We call it visual musicality. When people hear the music, they see it, too.”

For example, he added, the band should march slowly across the field when the music is slow.

The drill writer said it took a while to develop his visual musicality skills. When he first started, he would have to ruminate over performer placements. Now, he’s able to visualize drills fairly quickly.

“Writing is like a chess game,” Temby said. “You’ve gotta think three steps ahead. … if you wait until the last minute to decide where things are going to be, you’re in trouble.”

Temby later explained he’s been a longtime fan of chess (favoring the queen’s pawn opening) and used to map out marching drills on chess and Stratego boards.

Wearing a t-shirt that said “Life without music would be” — a popular slogan among school ensembles — Temby reflected on his love for marching bands, which he considers a competitive sport.