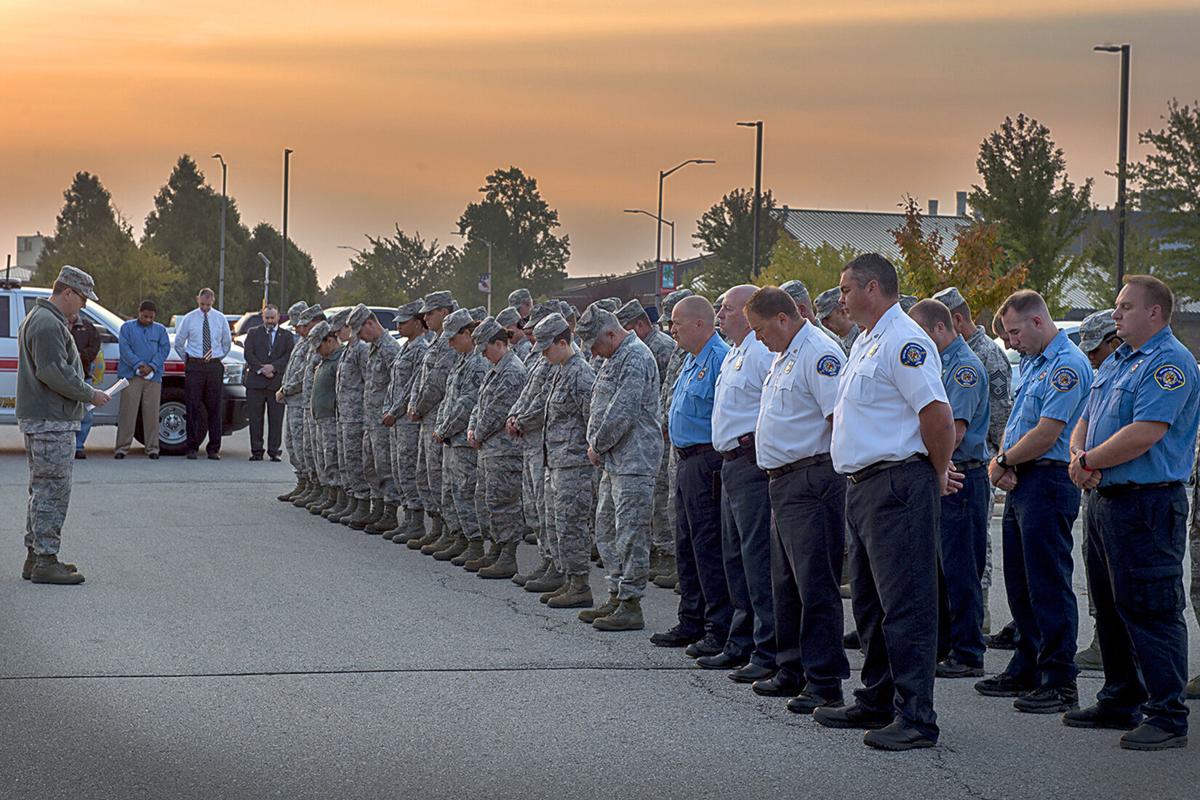 Members from the 434th Air Refueling Wing gathered at Grissom Air Reserve Base on Sept. 11, 2017, to remember the fallen heroes who perished in the terror attacks in 2001. The ceremony featured remarks from Col. Larry Shaw, 434th ARW commander. 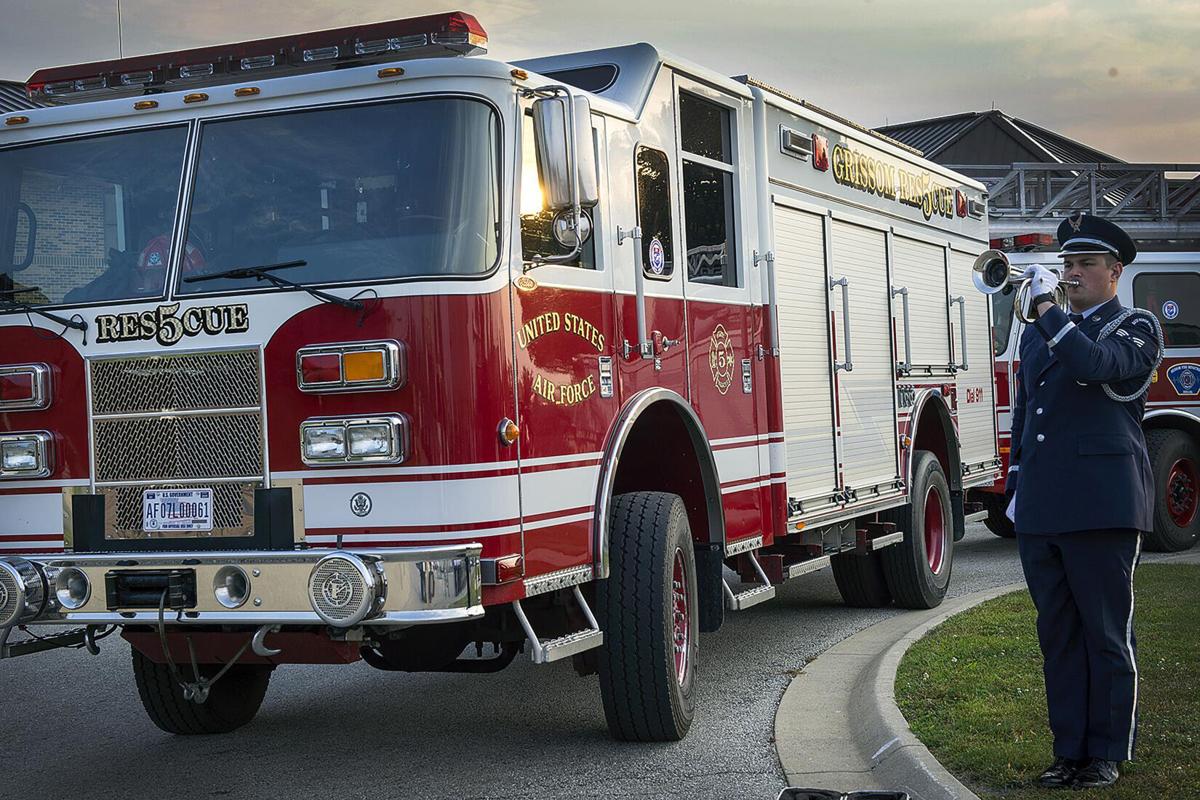 Members from the 434th Air Refueling Wing gathered at Grissom Air Reserve Base on Sept. 11, 2017, to remember the fallen heroes who perished in the terror attacks in 2001. The ceremony featured remarks from Col. Larry Shaw, 434th ARW commander.

He felt ready to go to war.

On Sept. 11, 2001, DeAngulo was at Grissom Air Reserve Base working as a logistics planner. In fact, that morning, he was in a meeting with about 20 other base officials planning an upcoming mission to France to support a no-fly zone in Kosovo.

But that mission came to an abrupt halt when an airman stuck his head in the door to let them know a plane had flown into one of the World Trade Center buildings.

Soon, they were huddled around one of the few TVs allowed on base, wondering how an airplane had slammed into the building on such a clear day.

Then, they watched as a second plane hit.

“We stopped and looked at each other,” DeAngulo said. “A shiver went through all of us. Right at that moment, we knew we were at war.”

Immediately, the base went into its highest security mode. DeAngulo said as news reports came in about the planes crashing at the Pentagon and in Pennsylvania, no one knew what was being targeted for attacks. Grissom officials put every building on lockdown and secured the perimeter.

“We became a very hard target if someone did have a mind to go after the base,” he said.

Calls poured in from command headquarters asking how soon Grissom could deploy its airmen, and air traffic controllers worked closely with the Federal Aviation Administration to get domestic aircraft out of the sky.

“Our training kicked in, and we were all doing exactly what we needed to do to execute the mission and support each other to be ready, no matter what it took, to carry out the orders of the president and national command authority,” DeAngulo said.

At noon, the frenzied activity at the base abruptly stopped as the national anthem played out.

“That’s when the words and the anthem hit me really hard,” DeAngulo said. “I knew we were at war. I knew what my grandparents felt like after Pearl Harbor.”

That night, he went home and started packing. He knew a deployment was coming soon.

Over the next week, DeAngulo and other logistics planners started putting in 16-hour days to come up with mission options as the nation’s military geared up for war. Teams worked frantically putting together deployment options, and calculating the cargo and personnel it would take to make them happen.

“Every day was like a new science project,” he said.

On Sept. 19, DeAngulo’s boss told him they were cutting back to 12-hour days and told him to go home and sleep in after a week of non-stop planning.

That never happened. At 8 a.m. the next day, he got a call telling him to get the base immediately. DeAnglo sped from his home in Greentown to Grissom, where he learned they had a mission. He and 250 airmen were told they were immediately deploying all 12 of their KC-135 tankers for refueling missions over the north pole.

DeAnglo and others started calling reservists from all over the Midwest to get to the base by 12:30 a.m. to prepare for deployment. By 4 a.m., they were sending out fully loaded planes.

In the flurry of activity, DeAnglo had just enough time to run home to say a final goodbye to his wife and daughters before boarding the last plane leaving the base for his deployment.

“That’s probably the hardest thing I’ve ever done in my life, saying goodbye to my wife and my daughters and not knowing if I’d ever come back again,” he said.

Back at the base, DeAnglo said he learned they weren’t heading north toward the arctic anymore. At the last minute, a storm around Alaska forced the mission to change directions. Instead of the north pole, they were heading south to Hawaii.

“We had just told everybody to bring every piece of cold weather gear they had,” he said with a chuckle.

Outside the base, news crews from around the Midwest started descending to find out what was happening with the deployment.

Grissom Public Affairs Officer Doug Hays said from 4 a.m. to 11 p.m., he stood outside answering reporters’ questions and doing live broadcast interviews, but there wasn’t much he could release about the deployment.

“People consider Grissom a small base, but that day, we had 26 satellite trucks show up outside the gate,” he said.

In reality, Hays said, what he really wanted to do was hop on one of the KC-135s and deploy to support his country. He said he had friends who were on those planes.

“I was wishing I could be deployed, but I was doing my job at the base,” he said.

Meanwhile, other news stations that day caught footage of a horde of B-52s flying out from a Barksdale Air Force Base in Louisiana. Reporters didn’t know where they were heading.

But DeAnglo knew. They were flying toward Hawaii, and members of Grissom’s 434th Air Refueling Wing were there to get them refueled.

The mission at Grissom ended up being the fastest activation and deployment in the history of the Air Force Reserve. In less than 24 hours, the base had activated 250 airmen and deployed 14 aircraft to Hawaii to commence the War on Terror.

DeAnglo ended up returning from deployment in December, but two weeks later, he was shipped off to Bahrain to support refueling missions in the Middle East.

And those missions never stopped. He said over the past 20 years, Grissom airmen have continuously deployed to Middle Eastern nations to support war efforts, including security detail, civil engineering and airplane maintenance.

“Across the board, it’s been continuous for the last 20 years,” DeAnglo said. “We still had people up until very recently deploying to Afghanistan and Iraq and all these different locations.”

He said 9/11 was a day he’ll never forget, because it was the day that drastically changed the mission at Grissom for two decades. And, DeAnglo said, he was proud to serve during all of it.

“It was a hard day,” he said. “It’s one of those days that’s embedded in my brain for the rest of my life. But I’m just proud to be part of this wing. We’ve got great leadership and camaraderie here. We’ve got people from 33 different states that belong to this wing, and they’re here because they want to be here.”