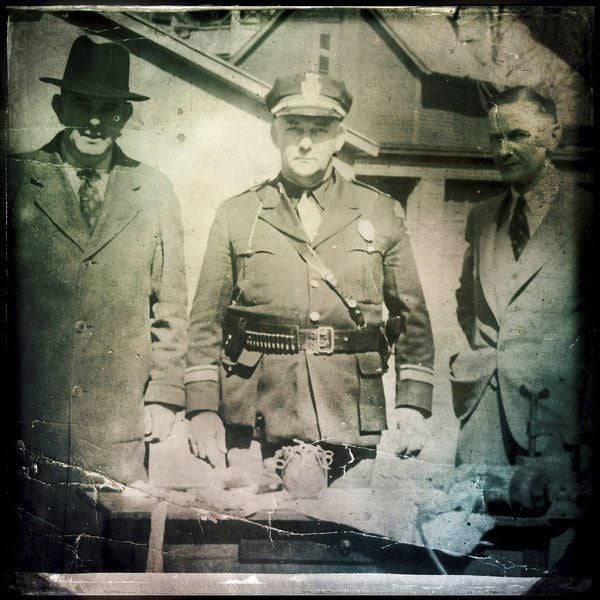 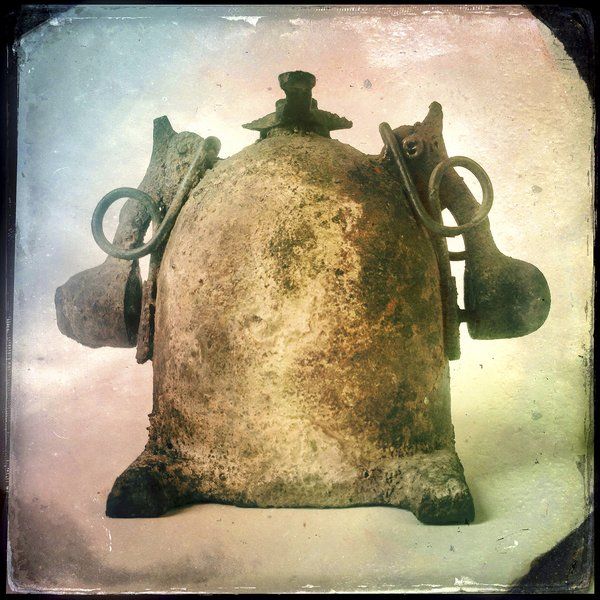 This grave bomb was discovered in Logansport's Mount Hope Cemetery in the late 1930's still guarding the grave of Catherine Grabel Huntley since 1885 in an effort to deter grave robbers who who unearthed and sold bodies to medical schools for educational uses during the late 1800's. 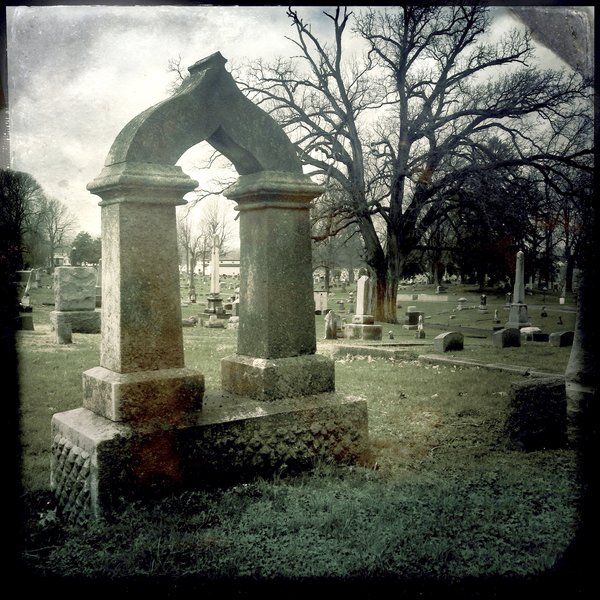 Today Logansport's Mount Hope Cemetery still keeps up the graves from the late 1800's an era when grave robbing and grave bombs where common place. 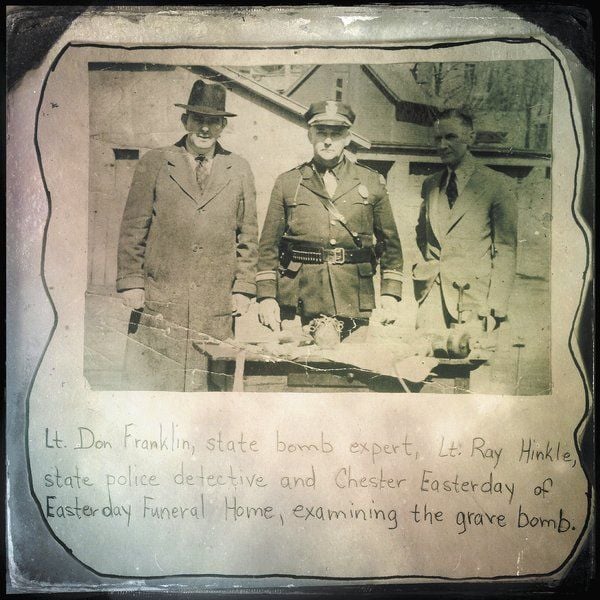 This grave bomb was discovered in Logansport's Mount Hope Cemetery in the late 1930's still guarding the grave of Catherine Grabel Huntley since 1885 in an effort to deter grave robbers who who unearthed and sold bodies to medical schools for educational uses during the late 1800's.

Today Logansport's Mount Hope Cemetery still keeps up the graves from the late 1800's an era when grave robbing and grave bombs where common place.

For those who dared to rob graves in northern and central Indiana in the late 1800s, there was a good chance they were met by a thunder from six feet under.

These crimes, viewed with disgrace, were committed to meet a demand set by what today are looked upon as revered educational institutions in the course of training the country's future physicians. The answer to preventing the offenses would require perpetrators to seek medical attention themselves or place them in the same condition as those they intended to rob.

One such device — called a grave bomb or torpedo — was discovered in Logansport more than 75 years ago.

The account was documented in the Dec. 15, 1939, edition of the Pharos-Tribune. The article states "the heavy metal 'gadget'" was found by grave diggers at the Huntley-Orwin lot in Mount Hope Cemetery in Logansport. It was believed to have been placed there during the burial of Catherine Grabel Huntley in 1885. The bomb was turned over to her family, who presented it to Chester Easterday, a local undertaker. Easterday then made arrangements for the Indiana State Police to "tap" the device and rid it of any possible chance of an explosion.

A March 21, 1940, Pharos-Tribune article follows up on the matter. It states ISP Lt. Don Franklin, "an expert on explosives," drilled a hole in the bomb's heavy, round casing and removed a pound of black powder.

"Although it had lost much of its strength, the powder was still dry and would burn, a test showed," the article states.

After it was declared safe, it was given to the Cass County Historical Society in Logansport, where it remains to this day.

The article goes on to describe the bombs as having double hammers attached to powder springs. These hammers were held from the firing pins by wires that stretched over the coffin. Should a thief's shovel snap any of these wires, the hammers would strike the firing pins and explode the bomb.

The December 1939 article goes on to describe the bombs as quite common in the 1800s, even locally, to ward off robbers referred to as "grave ghouls."

"During the 'reign' of the 'grave ghouls' many such devices were placed in cemeteries of the county by relatives of deceased persons as protection against possible loss of the newly buried body," the article states.

An article that ran in the April 30, 1880, edition of the Noblesville Ledger touts their effectiveness.

"The charge placed in these torpedoes is three-quarters of a pound of rifle powder, enough to send a rascal who would attempt to desecrate a grave to the world where there is no need of torpedoes," it states.

They weren't used for protecting valuables buried with the deceased, but the bodies themselves.

The 1940 Pharos-Tribune article refers to the bombs as "a relic of half-century ago when stealing bodies from graves was a lucrative criminal pursuit."

Historian David Heighway elaborated on the local prevalence of these crimes and the motivation behind them in a talk he gave Jan. 18, 2001, at the Indiana Medical History Museum in Indianapolis titled "Grave Robbing in Central Indiana: A Grim Necessity of Medical Education."

Heighway's transcript recounts a widely held opposition to the dissection of human bodies, lasting from the time of the ancient Greeks all the way up to the late 19th century.

An episode of "History Detectives" that aired on PBS July 6, 2009, expands on the topic further. Segment host Wes Cowan interviews Scott Gampfer, director of History Collections at the Cincinnati Museum Center at Union Terminal. Gampfer tells Cowan about medical schools doubling in the U.S. between 1865 and 1890, increasing competition when it came to offering ways for students to gain practical experience. This, combined with objections from churches and lawmakers over the use of cadavers, actually drove these institutions to the black market.

"...[I]n other words, doing business with grave robbers," Gampfer said in the episode.

"The History of American Funeral Directing," published in 1955, states grave bombs were invented to deter these robbers from having a means to arrange sales with anatomists.

Another kind of grave bomb was the subject of an article in the Nov. 18, 1878, edition of the Ohio State Journal based in Columbus, Ohio. The story credits Phil K. Clover, a Columbus artist, as the grave bomb's inventor. The device is described as being made up of two sections. The first contained a strong spiral spring fastened to the inside of the coffin with a small chain attached to its occupant. The second part, containing a charge of powder and shot, would have been screwed to the first. Were the body to be moved, the chain would pull the spring and detonate the bomb.

"The torpedo is set so as to shoot upward," reads the article, "and is to be placed so that the resurrectionist, stooping over his work, will come within range, and if he does not get killed or wounded, be brought to the summary conclusion that matters are red-hot in that vicinity, and that the friends of the deceased were decidedly averse to commercial transactions in the bodies of their dead."

Strategy would also be applied when using these kinds of bombs to avert robbery attempts, the article continues.

"A number of torpedoes might be placed in the coffin," it states, "so that the resurrectionist would be at a loss to know in what particular spot the destructive engine was to be found, or when the last shot was fired."

An article in the April 30, 1880, edition of the Noblesville Ledger endorses their use and promotes one local undertaker's provision of them.

"...[W]e advise cadaver hunters to seek some other locality," it states, "as Reynolds & Son place them over the bodies of all adults buried by them, free of charge."

The May 7, 1880, issue of the newspaper reminds readers of the need of such devices.

"These torpedoes have become a necessity since so many graves of loved ones have been robbed by unprincipled scoundrels for a paltry sum of money," an article states.

While the one discovered at Mount Hope Cemetery never detonated, some of them certainly did.

One went off during a memorial service, the Dec, 29, 1880, edition of the Noblesville Ledger recalls.

"...[T]he torpedo exploded, blowing the loose dirt from the grave, but luckily not injuring the corpse nor the spectators," the article states.

Authorities were never able to determine who disturbed one of the fortified graves in Zimmer Cemetery near Noblesville, according to an article in the April 30, 1880, edition of the Noblesville Ledger. It states the earth was removed from the grave and that the torpedo beneath exploded, "but by what agency it is impossible to tell."

"We cannot conceive how a man in the act of attempting to dig down to a body could possibly escape destruction," the article continues.

It appeared to have served its purpose, however.

"The force of the explosion was so great that but little earth was left in the grave, and it was soon ascertained that the body had not been disturbed," the article went on to state.

The broad aversion toward medical schools' inclusion of realistic study materials had started to wane at the turn of the century. Cowan told viewers of his grave bomb episode of "History Detectives" that storage and preservation of cadavers improved greatly around this time, allowing schools to acquire them in acceptable and legal ways.

By the time the grave bomb was discovered in Mount Hope Cemetery in Logansport in the late 1930s, they were already a thing of the past, allowing the departed to rest in peace without relying on a device that burst into pieces.