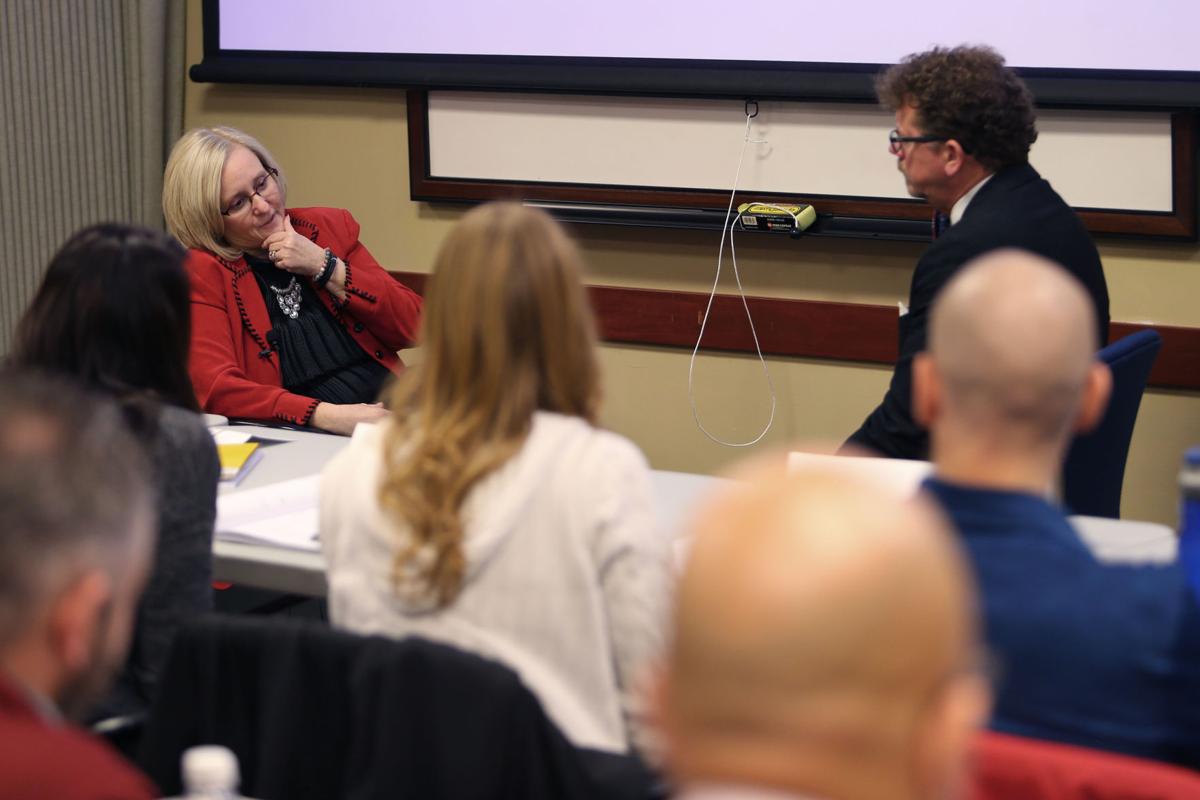 Local police and fire officials are taking part in critical incident stress management training at the Community Howard Regional Health on February 7, 2020. Here, Lindi Holt and Kimble Richardson do a role playing scenario to help get their point across of counseling coworkers who have been in a stressful situation. 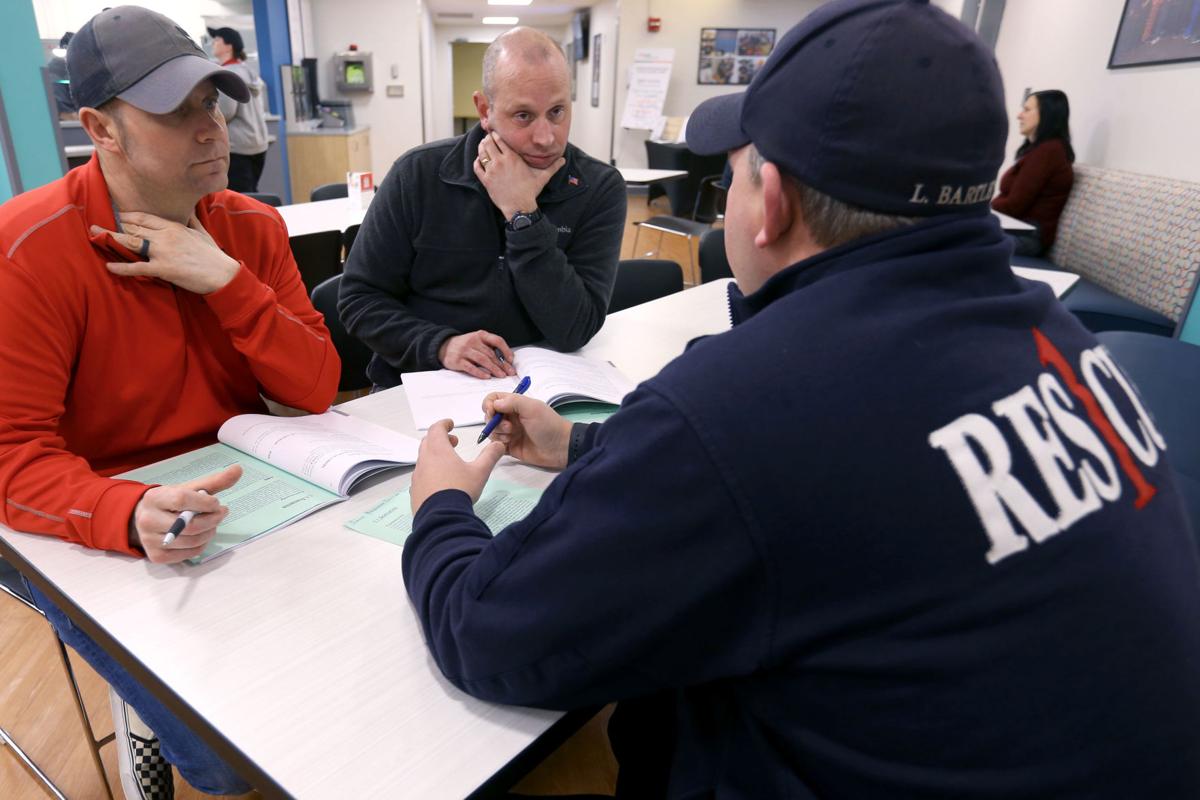 Before doing role playing, Kokomo firefighers Josh Hedrick, Scott McKay and Landen Bartley discuss what they already do after a critical incident.

Local police and fire officials are taking part in critical incident stress management training at the Community Howard Regional Health on February 7, 2020. Here, Lindi Holt and Kimble Richardson do a role playing scenario to help get their point across of counseling coworkers who have been in a stressful situation.

Before doing role playing, Kokomo firefighers Josh Hedrick, Scott McKay and Landen Bartley discuss what they already do after a critical incident.

From house fires to homicides, the life of a first responder is often hectic.

“We’re the ones that come in and rescue the day,” Andy Eshelman, president of the Professional Firefighters of Kokomo Local 396, said. “… Then we’re supposed to leave while still wearing those capes and with our heads held high. But we’re coping with it all on the inside.”

While there is a lot of talk about the physical aspects of a first responder’s job, it is the mental health side that often gets neglected, he said.

Of course the topic of mental health and first responders is often a taboo one, usually met with public stigmatization, Eshelman added, but he pointed out that it’s also one area that needs to be openly addressed.

According to its website, CISM is a program that is designed to help participants understand a wide variety of crisis intervention techniques. After the training, those participants then become certified and go back to their different agencies in what are called CISM “teams.”

Those teams are then able to conduct confidential debriefings within their departments or agencies while also offering peer support for colleagues in need.

Up until the recent training, there was only a handful of first responders from the Howard County area that were even certified in CISM, so local police, fire and medical officials had to rely on teams from other areas like Anderson to come to Kokomo and lead debriefings or offer peer support.

That was the case with the death of Howard County Sheriff’s Department Deputy Carl Koontz in March 2016, who was killed in the line of duty while serving a warrant in Russiaville.

According to HCSD Sheriff Jerry Asher, a large contingency of CISM teams from Indianapolis were deployed to Kokomo to help out in the days and weeks after Koontz’s death, assisting those in the department who were struggling with the loss of a colleague.

But now, thanks to the recent training, departments like Kokomo police and fire, the HCSD and the Howard County Emergency Management Agency will each have their own certified CISM teams.

Those individual teams can also unite together to form one giant CISM team in case of a city or countywide crisis event too, Asher noted.

Kokomo Fire Department Capt. Jason Braden has been CISM certified for about five years now, and he noted that local agencies having their own CISM teams in-house is extremely beneficial.

“With the new teams that have come from this class, now locally and regionally, we can respond where we’re needed,” he said. “For instance, we’ll have a KFD team that is cross-trained between CISM for debriefing incident, and we’ll also have a peer support team who can dig deeper with guys who are having difficulties on the fire department.

“Some of the things we deal with are not normal,” he added. “Some of the runs we go on and the things we see, they do stick with us. So just being able to identify those factors allows us to give our peers the resources to get help.”

“This training, we help people understand psychological reactions they would have to a trauma,” he said. “We try to teach that most human beings are going to have normal reactions to an abnormal situation. At the same time, most humans feel so overwhelmed that they don’t know what to do with those feelings or how to express them.

“If you don’t address them appropriately and in a healthy way, those feelings can turn into things like depression, post-traumatic stress and anxiety,” Richardson noted. “You then get people that start thinking, ‘Do I want to be in this profession anymore? Do I even want to go back to work?’”

And those bottled up feelings can be even worse when you’re a first responder, Richardson added, which is why having the training is so valuable for that particular group.

“There’s part of a rescue personality there,” he said. “We want people to be tough. These kinds of professions require a level of mental and emotional toughness to be able to handle it. But what happens is that it’s difficult to turn that toughness on and off. So sometimes when you get home, it doesn’t automatically change.

“That’s when you have to really work at it to have a good balance of, ‘I can be tough but also recognize when I’m stressed and need a break or need to talk to somebody about it,’” Richardson continued.

Eshelman agreed with Richardson, saying that CISM training and certification is just another tool in the tool belt for first responders, one that helps them lead more productive lives while in public service.

“If there’s an incident of any magnitude, a shooting or a fatality for instance, a certain agency responds to it,” he said. “If they have any issues whatsoever, then a [CISM] team leader can then send out a mass text message or phone call to get those teams to go speak with the agency ... And it in turn gives them an opportunity to possibly see something in their co-workers that needs to be addressed.

“Over time, we make these runs over and over again on a daily basis, and it builds up inside of us,” Eshelman continued. “… But the people we work side-by-side with each day, we know each other really well, and we can tell when someone is having an off day. So with this [a CISM team], these people can possibly reach out to those who are silently hurting and talk to them. And maybe at the end of the day, that’s all those people need is that outlet.”