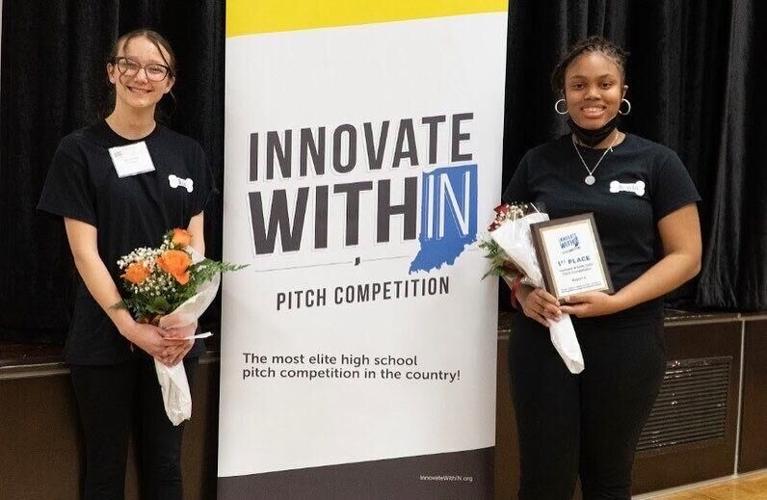 Fleming and Davis stand with smiles after winning the Innovate WithIN Pitch Competition. 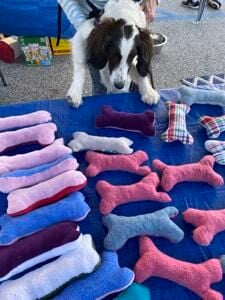 One pup looks intrigued at the Patchables product line.

Patchables LLC is a dog toy business created by two students from Hobart High School, Isis Fleming and Kayla Davis. Their products are entirely made from recycled materials. The company receives these recycled materials from textile production waste and donations. This leads to each toy being unique, due to the different donated textiles that are used.

Fleming and Davis came up with the idea in their engineering class as part of a required assignment. Their teacher, Daniel Schultz, asked them to identify a problem in the world that needed to be addressed, and combine it with things they enjoy and excel in. With this, Fleming and Davis combined the problem of pollution, with their love of dogs, and Fleming’s love of sewing.

After they landed on this idea, they spent three months researching, surveying, and developing their idea. The duo then went to competition, beating out classmates and others to become their region’s champion. They received $1,000 and attended a “boot camp” to further develop their prototypes and ideas after winning the regional. Following this, Patchables competed with nine other regional champion teams in the state competition, along with a few wildcard teams. At these competitions they had to give a six-minute informational business pitch, showing their prototype, and explaining what they were doing, their inspiration for doing so and how they planned to do it.

These business pitches were in front of an estimated 300 people, according to Fleming. Fleming and Davis were not aware of this, and admitted they weren’t nervous about their pitch until they learned the size of the audience.

“When we were doing it, we weren’t necessarily nervous,’’ said Davis.” To be honest, I wasn’t expecting to make it this far. This is all very shocking to me, but now that I’m here, I know that I can go further.’’

“Originally, no, we were not nervous,” Fleming added. “Once we were there, oh my Lord, the first day before we pitched, my heart and Kayla’s heart, we were trying to calm each other down because of how nervous the both of us were. We kind of built off each other and we were able to overcome that of course because we’re here now.”

The pair’s ability to overcome these nerves pushed them to victory in the competition, resulting in a reward of $25,000 in seed funding placed in a business bank account to continue growing Patchables, with an additional $10,000 each toward a 529 education funding plan and the highest scholarship levels offered by Innovate WithIN’s 18 university partners.

Along with the reward, Fleming and Davis were both able to come away with lessons learned.

Fleming said her biggest takeaway was, “Persistence. If you’re persistent in your passion about something that you’re doing, that’s going to take you further than anything else. You have to have the passion for what you’re doing in order to be successful at it.”

Davis also spoke about developing her skills. “Something I’ve picked up, I don’t know if you can learn, is confidence. I’ve gained a lot of it since I’ve started doing business, mostly because having to pitch my own ideas and having to believe in myself and having to stay passionate is something I’ve had to do a lot,” said Davis.

“Not only being 15, and starting a new business, you have to be in a world where you’re with adults so if you don’t have enough confidence it’s hard for people to hear what you are saying or be as invested in it, so having grown my confidence has not only helped me in business, but school in general, and that’s something that’s been really amazing for me.”

Since the competition, Patchables has already made a few updates and changes, such as a new website, and new manufacturing partnership. Although Fleming sewed the original prototypes, Patchables has now paired with a manufacturing company to make their products. “Our manufacturer is Tradewinds, which is a company located in Merrillville Indiana that employs the disabled community, which we felt was important to us since they have good practices, good payroll, and such,” said Fleming, “They have been excellent with working with us, and we’ve had our first and second runs completed. Once we have our (new) machinery that labor cost is expected to be cut in half, which will be amazing for our business,” said Fleming.

Fleming and Davis spoke about the time commitment, estimating that it takes up around 25 hours of their week. Davis said, “During the school year we did a lot of work towards this, and it took a good amount of time for us. I think it’s fine with us because even being normal teenagers, you do want to do your fun stuff on the weekends, but it is something we are passionate about, so it is not something we feel as it is work, so we don’t mind doing it on the weekends, or working at night and doing it because it is something we are passionate about.”

Davis and Fleming are both 15-year-old upcoming sophomores, and must make time for school, along with Davis having a part-time job. They do plan on growing Patchables in the time they do have though.

“Patchables is going to go really far. This is not just some side hobby. This is going to be fully developed to the best of both of our abilities. We are looking into making more products. We’re looking into different corporations we can help reduce their textile waste, and general thinking of what can we do better,” said Fleming, “This will be a corporation one day, this will be a full company one day and we will keep working on it until the end of time, honestly.”

Patchables already has new product ideas. Currently they only make two toys that are both intended for dogs, called rope toys and bone toys. They are looking to add different sizes to these toys, along with cat toys, leashes, harnesses and other pet products. Their biggest goal is to expand past just making dog toys, and to cater to a variety of pets.