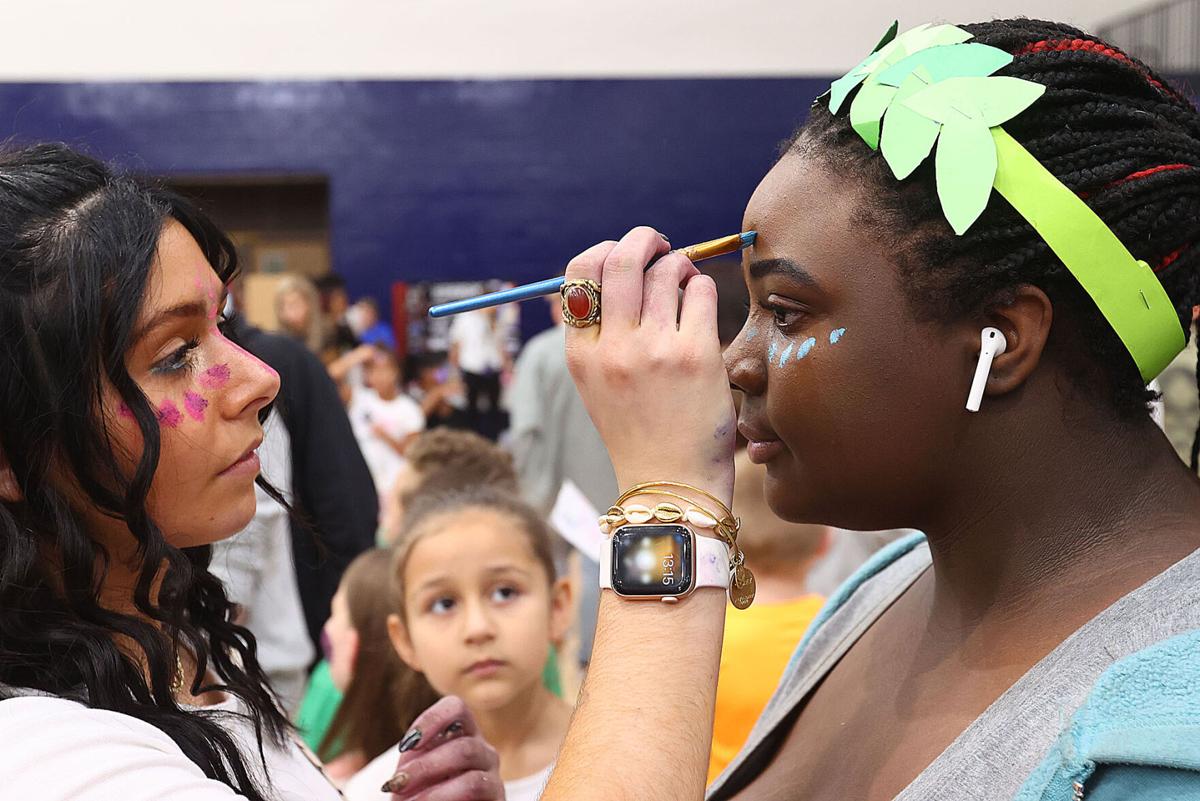 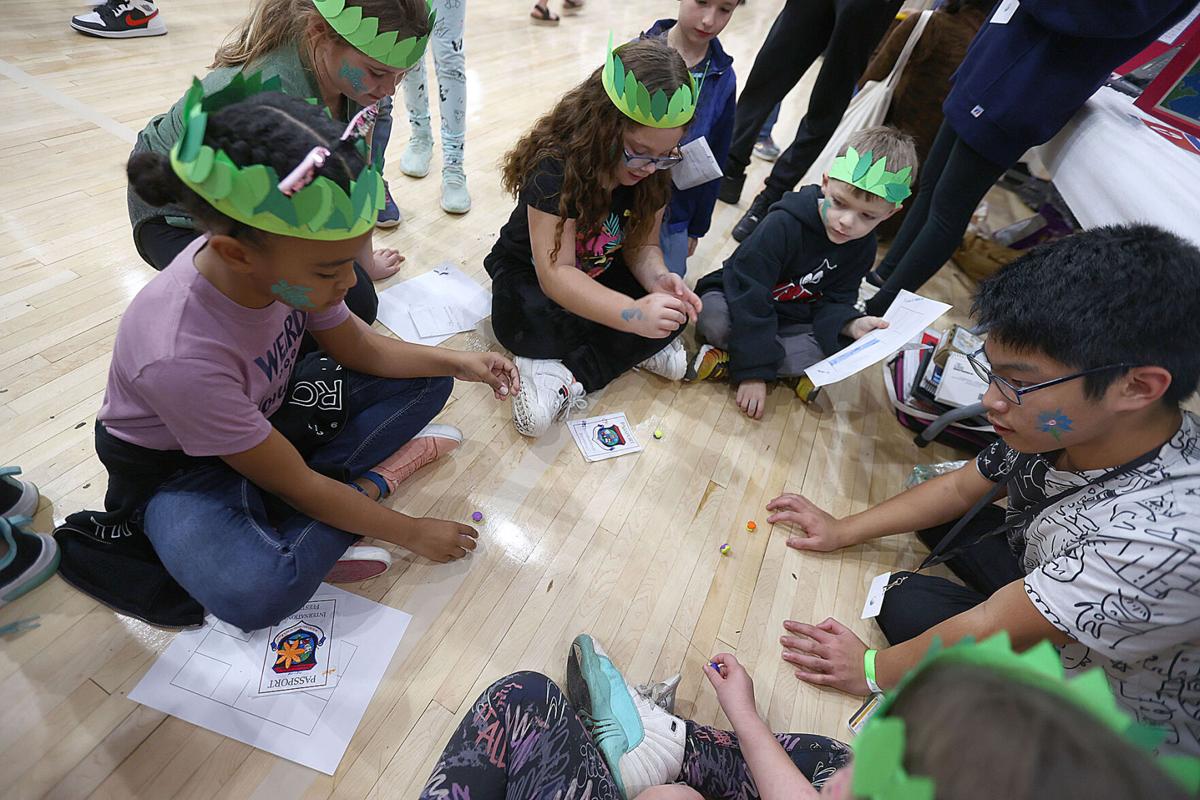 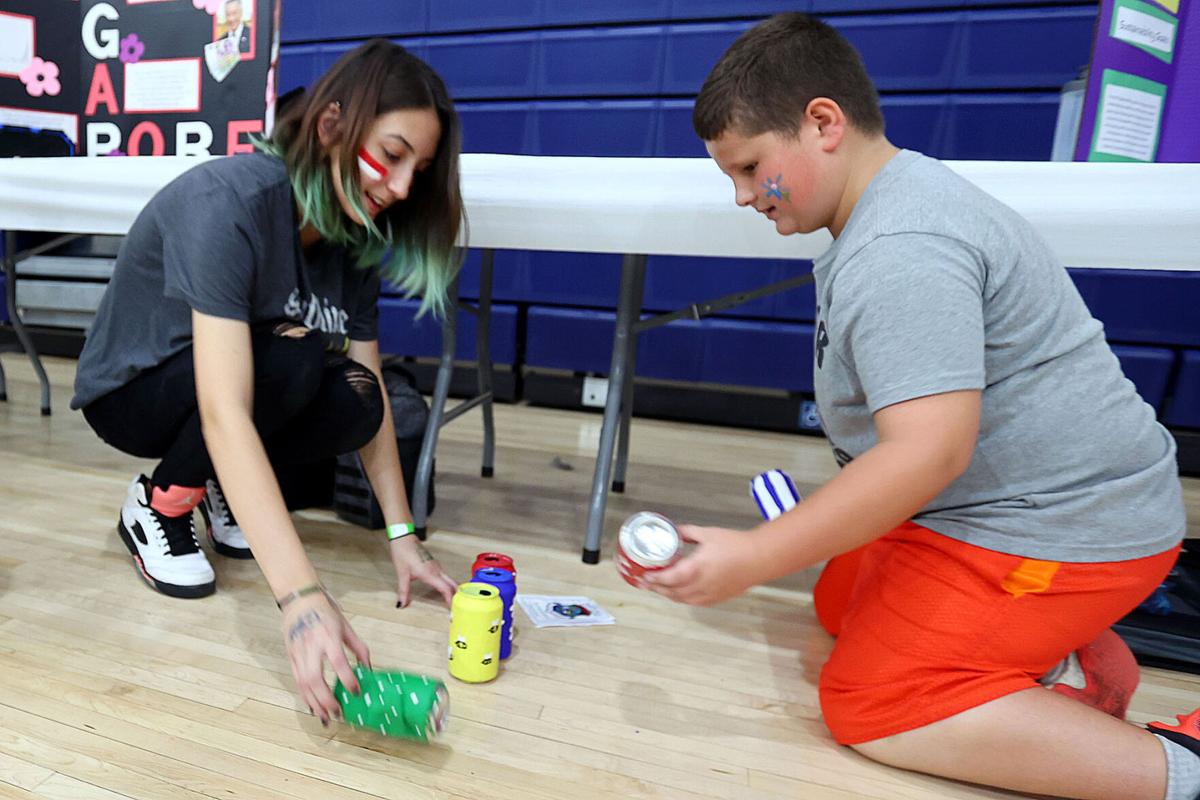 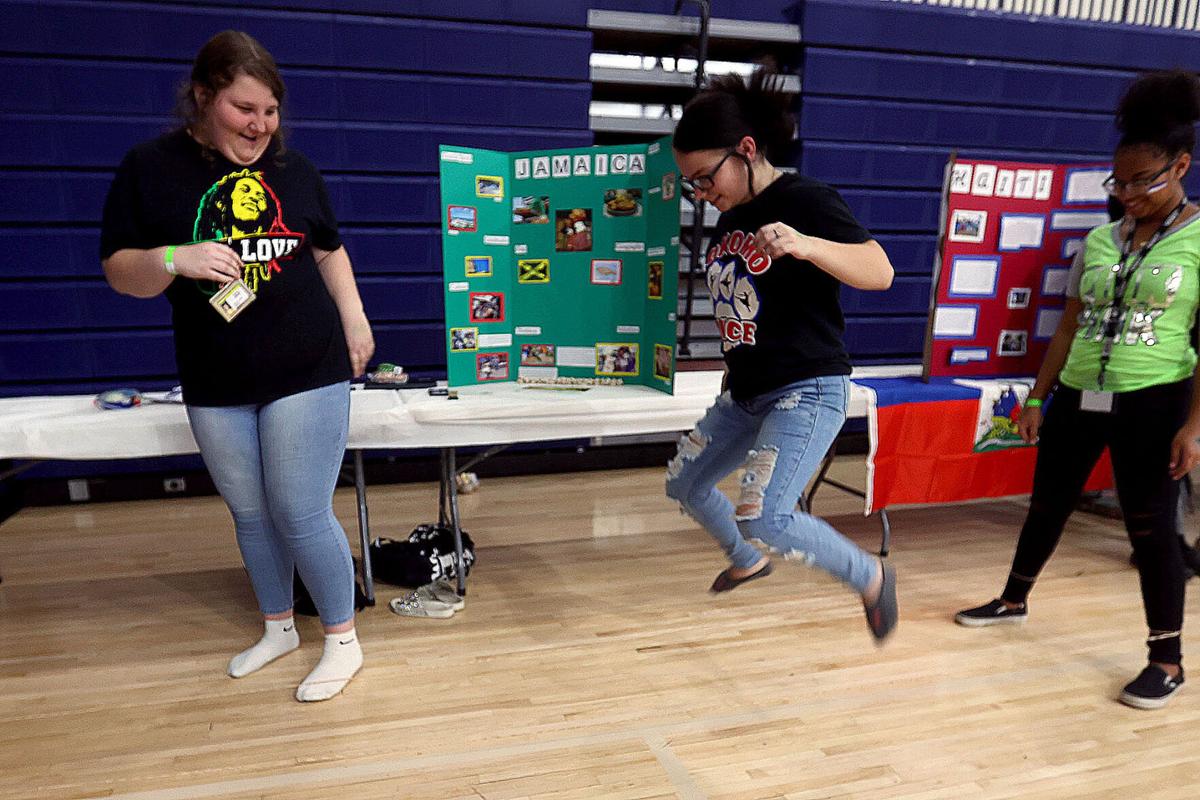 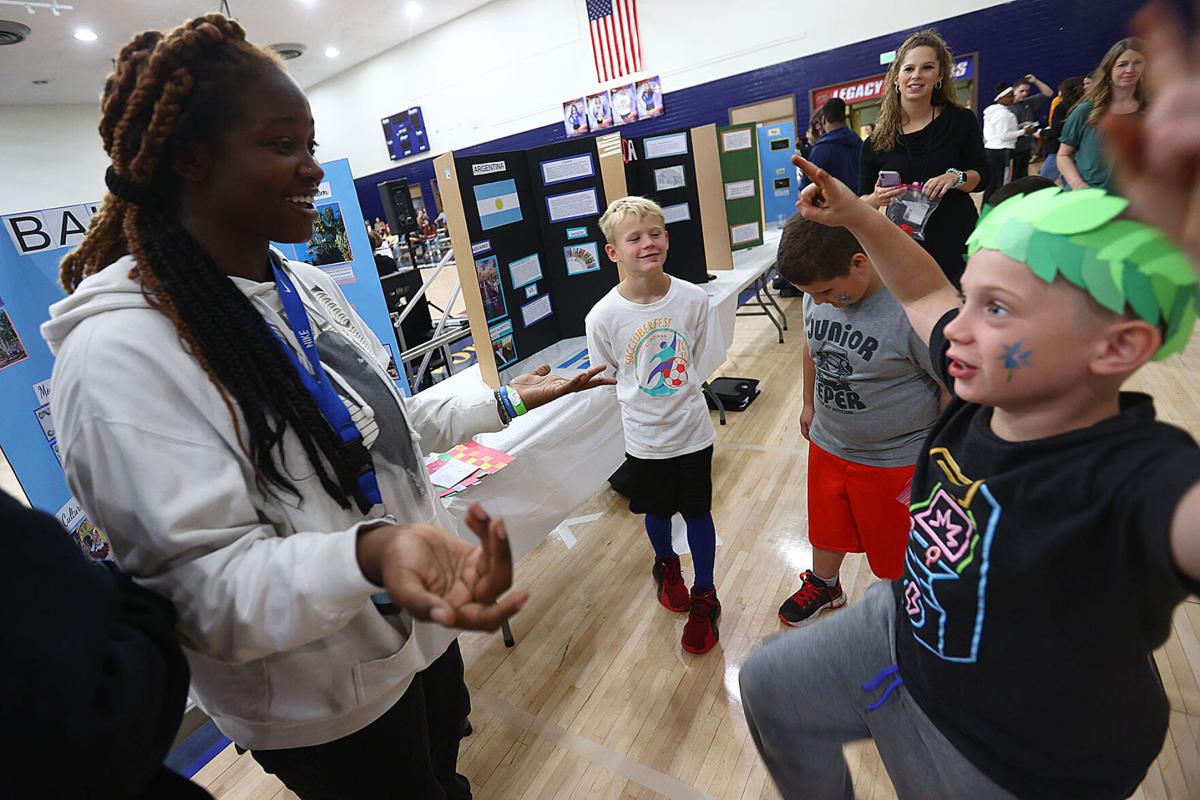 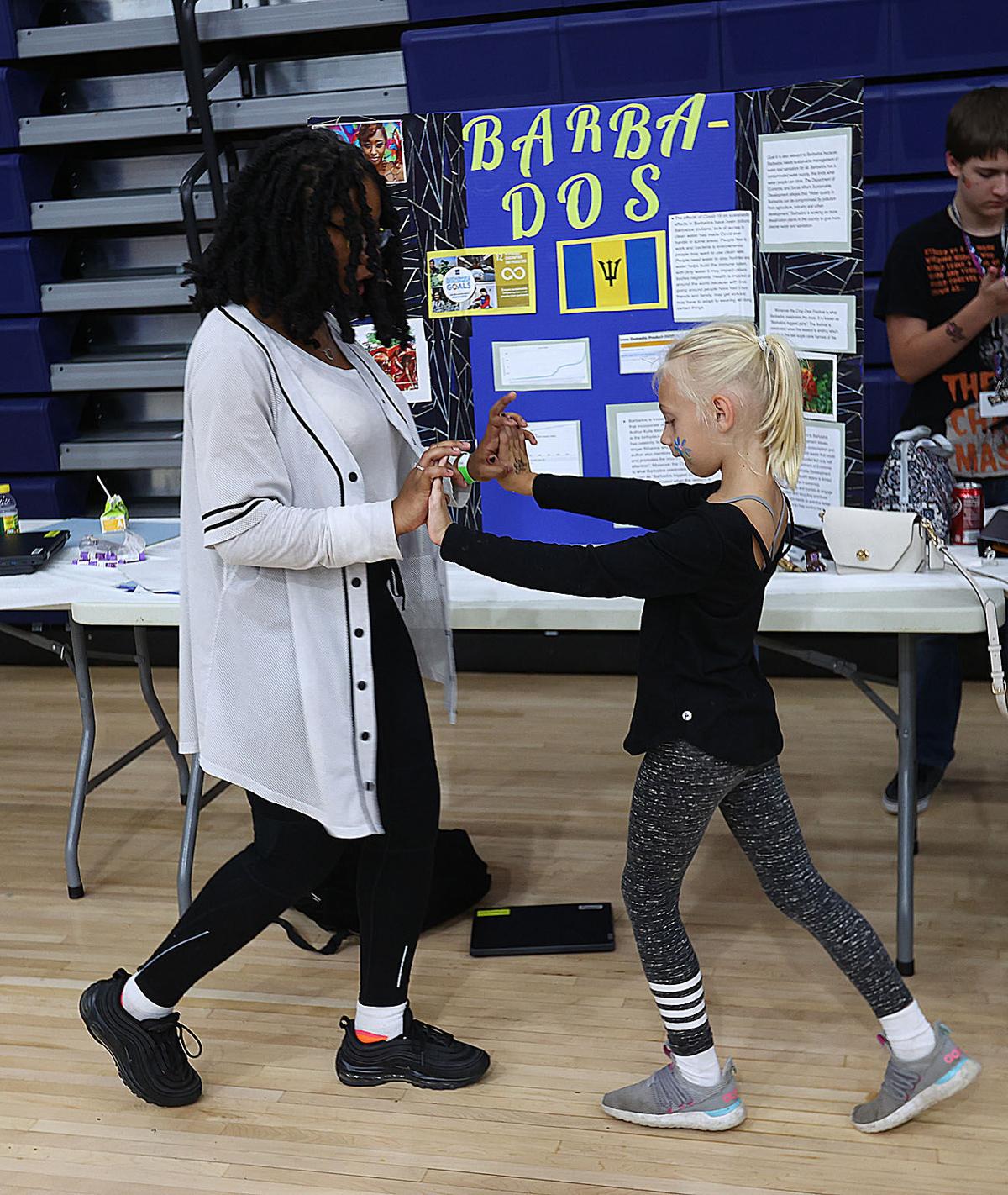 Dancing is a engrained in Barbados' culture, so Lyric Smith teaches Elaina VanWinkle one of the dance steps during the Kokomo High School International Baccalaureate students' International Festival. 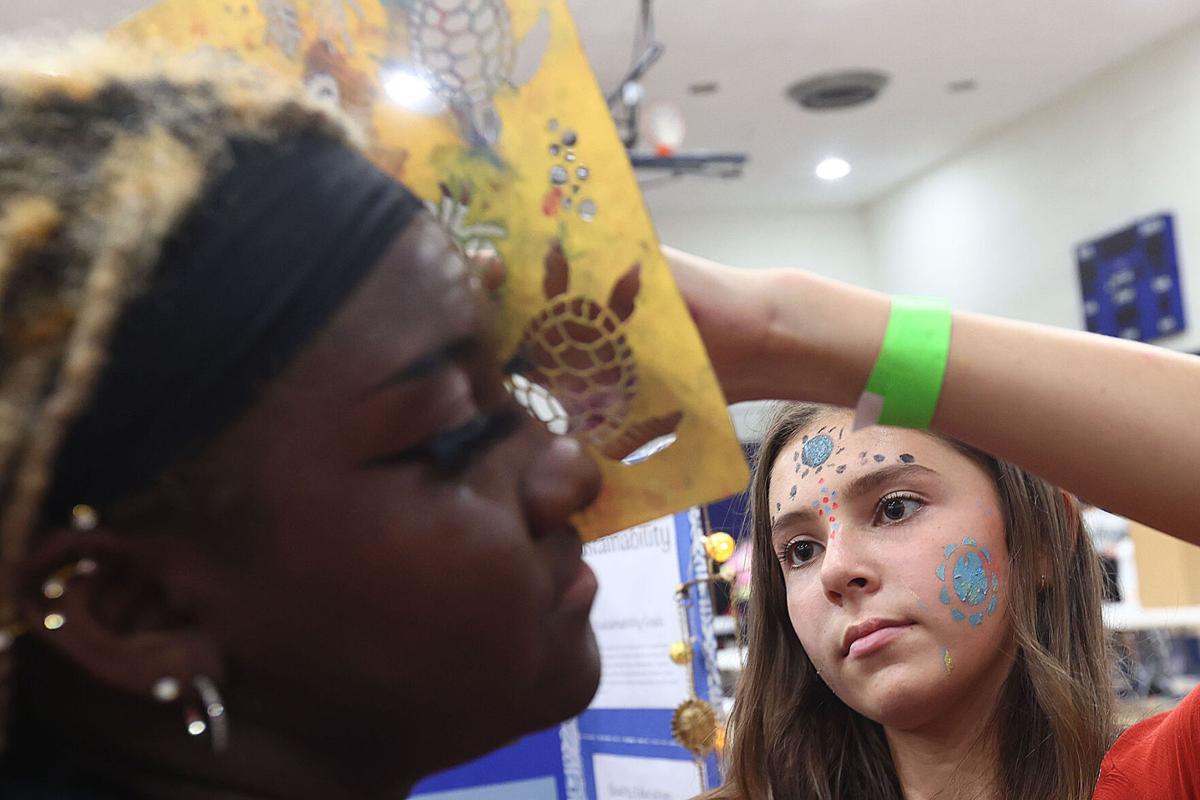 Dancing is a engrained in Barbados' culture, so Lyric Smith teaches Elaina VanWinkle one of the dance steps during the Kokomo High School International Baccalaureate students' International Festival.

One could travel the world in just a couple laps around Haworth Gym Wednesday morning.

A stop in Ireland came with a dance lesson. In the Dominican Republic, one could try their hand at some traditional games. Morocco had the snacks — butter cookies called ma’amoul.

At each stop, a group of Kokomo High School freshman International Baccalaureate students would tell you about each country.

Wednesday’s International Festival was the culmination of a research project for the students’ English class. Free to pick any country, students had to write a research paper and then present their findings with use of a poster board.

In addition to learning about its culture, students had to research how their country fared with United Nations Sustainability Development Goals and how the country handled the COVID-19 pandemic.

Presentations had to include an interactive aspect, like dance, games or even trivia.

Morocco was a popular stop, as Liliana Taskey and Keara Dechert offered traditional Moroccan face painting. The popularity was evident in the number elementary students walking around the gym with painted faces.

The two really wanted to do their project on France, but when the country was already picked, they were encouraged to go with the North African country due to its relations with the French.

Taskey and Dechert guessed they probably painted over 100 faces.

Kokomo High School welcomed elementary and middle school students to check out the students’ work. The band, choir and ensemble performed music from around the world throughout the day, adding to the festival-like experience.

English teacher Michael Marvin said the festival was a chance for IB students to see the effort everyone put into the project and also how they could improve on the next one.

“It pushes them on the next thing,” he said.

The majority of work was done during class, but Marvin said students asked to take their projects home to finish.

“It’s nice to see them take that initiative on their own,” he said.

The IB students not only presented to teachers who graded them, but also to young children. Marvin said the range of people the students had to present to hit on a key aspect of public speaking and writing: knowing your audience.

“I think it’s been exciting to see them engage with the other kids,” said teacher Randi Weeks. “I don’t think they knew they were going to enjoy that part as much as they did.”

Joseph Owens seemed to enjoy the presentation aspect. He and his partner did their project on Norway.

By Wednesday afternoon, Owens had given the presentation many times, pointing out the country on the globe, explaining its economy of oil and tourism and putting listeners through a quick round of trivia. If they got all five questions right, they received a small Norwegian flag.

Owens said they originally wanted to do their project on the island nation of Barbados, but his partner suggested Norway.

“I agree, I kinda want to live there,” he said.