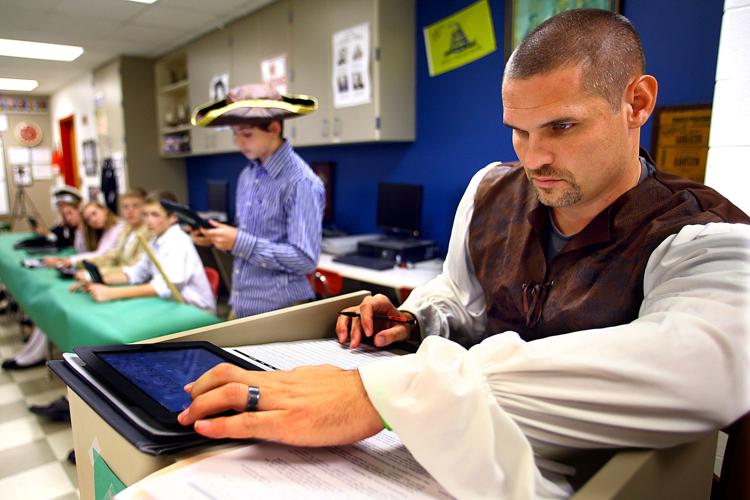 Kevin Pax records many of his lectures for students to watch outside of class. This frees up class time for projects, such as acting out the events of the Continental Congress. 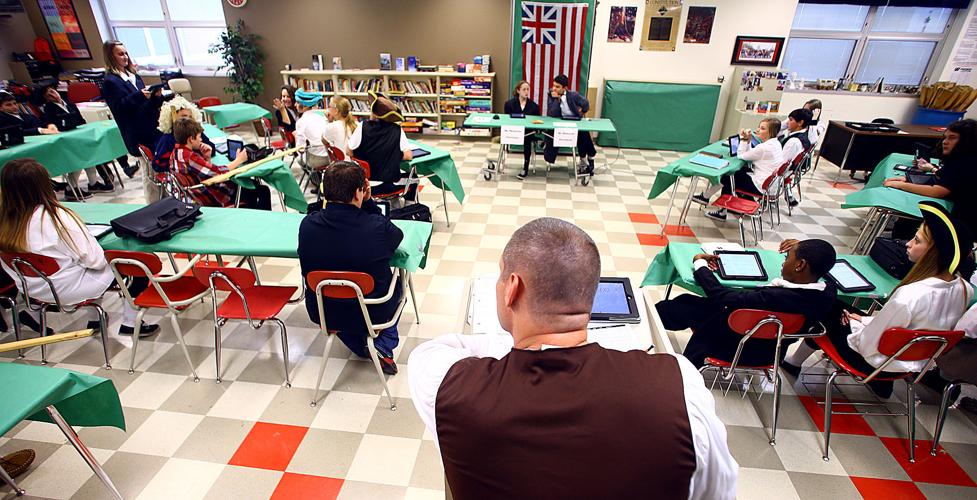 Teacher Kevin Pax's U.S. history class acts out the Continental Congress debate that will decide if the colonies will declare their independence. Tim Bath | Kokomo Tribune 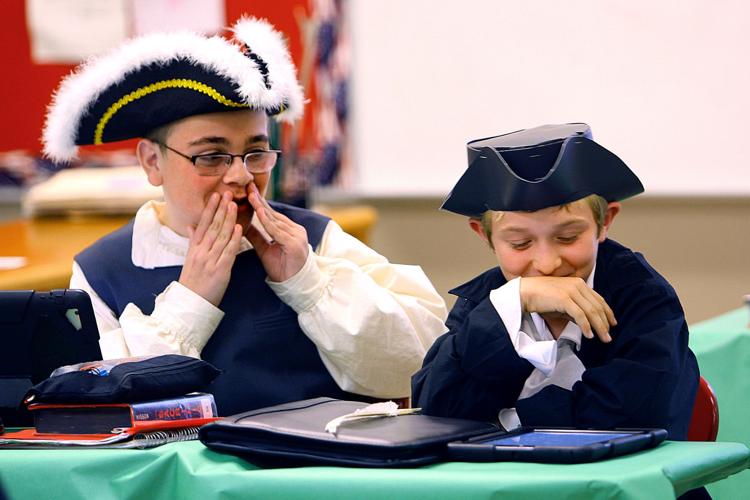 Kevin Pax records many of his lectures for students to watch outside of class. This frees up class time for projects, such as acting out the events of the Continental Congress.

Teacher Kevin Pax's U.S. history class acts out the Continental Congress debate that will decide if the colonies will declare their independence. Tim Bath | Kokomo Tribune

RUSSIAVILLE – Desks covered in green paper imitating Independence Hall’s signature green tablecloths and a girl carrying a quill pen alongside her iPad revealed this was not a typical day in U.S. History class.

Western Middle School teacher Kevin Pax sported a three-cornered hat, brown leather vest over a white shirt and had his khaki pants rolled up into knee-length breeches. He stood in the back of the room as his eighth graders, dressed in similar 18th century fashion, took their seats on Oct. 16.

The Second Continental Congress was in session.

Student Alec Helton, portraying John Hancock, was president of the Congress, which actually met in the summer of 1775. Helton recognized delegates from the Thirteen Colonies, who shared their stances on how to proceed in the Revolutionary War.

The students affected British accents as they stood to deliver the speeches they’d written. Any remarks in favor of breaking free from the “lobsterbacks” were met with cheers of “Huzzah!” and pounding on their desks. Pax watched and took notes as the students ran the meeting.

The Second Continental Congress session was part of a unit on the colonial rebellion and the third role-playing project Pax has assigned already this year. He’s able to set aside class time for those interactive projects because students keep up with his lectures on their own time, part of a flipped classroom model Pax first implemented last school year.

A flipped classroom involves pre-recorded lectures so students can watch them outside of class, and using class time for other, more interactive assignments.

“It frees up more time to do things like this to enrich their education, instead of just notes and notes,” said Pax, who has been teaching at Western for 14 years. “That’s the best way kids learn – by doing it. They remember it, and it’s more of an impact.”

Western implemented a 1:1 technology initiative two years ago, so each student has his or her own iPad to use in class and at home. That prompted Pax to do more research into the flipped classroom approach in an effort to make the most of the technology now available to his students.

His first year transitioning to the non-traditional set-up required extra work, as he had to record his lectures in advance.

“I’ve always been a fan of technology in the classroom,” Pax said. “That first year, it was a lot of work. I spent a lot of late nights here (at the school).”

Pax still does some lecturing in class, but having the videos allows students to review the material on their own time. Once or twice a week, students have to watch a 25-minute lecture and complete a digital note packet where they fill in blanks with information covered in the lecture.

Initially, most students were on board with the idea, Pax said, though some still don’t like using their iPads. Parents also came around to the concept.

“When people saw the positive of it – like being able to do more enrichment things in the classroom – they understood, ‘OK, that’s why it is this way,’” he said.

Eighth grader Macie Chaffee, who played the part of Thomas Jefferson last week, said Pax’s class is her first exposure to the flipped classroom concept. It was confusing at first, she said, but now she finds it helpful.

“I didn’t know why he would give us a video, but now I definitely understand it because it helps a lot,” Chaffee said. “It helps because if I miss something in class, I can go back and watch it.”

“It’s a lot of fun because it involves the entire class,” she said. “He makes it fun. He’s a great teacher.”

Having so much of the class material available online also makes it easier for students to keep up if they are out of school for an extended period of time due to medical issues or family emergencies. Substitute teachers can easily stay on track with what Pax had planned for the day too.

Pax’s classes are almost entirely paperless now. He uses an app to organize assignments, and students can complete and submit them electronically. Pax grades assignments and gives quizzes online, and he uploads study materials to an app with online flashcards, fill-in-the-blank activities and a matching game to give students incentive to prepare for tests.

Student Rachel Zentz’s older siblings were in Pax’s class too, and she knew her older brother watched lessons at home.

“I like how we get the lecture taught in class and can go back and watch if I missed something,” she said. “I think it’s a fun and creative way to learn. It helps us process it, especially if you’re a visual learner.”

Tools for a flipped classroom

WMS teacher Kevin Pax maintains a class website with videos of his lectures, class documents, weekly lesson plans and other information for parents and students. Check out his website here: http://bit.ly/1DAXIKt