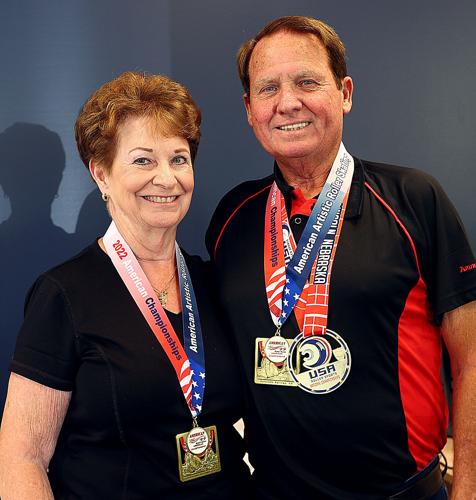 Ron and Karen Eller, who skate with different partners, are shown Sept. 9 with some of the medals they have won this year. 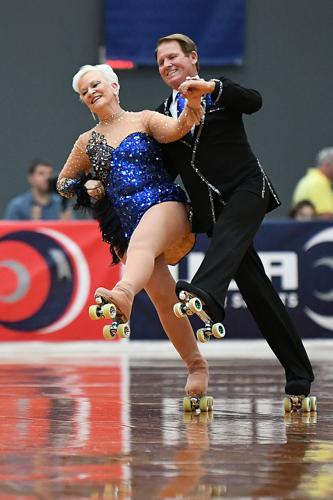 Ron Eller skates with his partner Dorothy DeRemer in this photo from 2022. 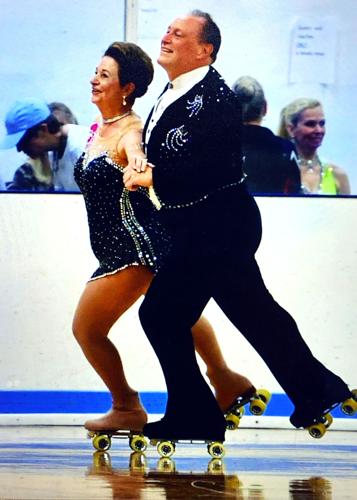 Karen Eller skates with her partner Bill Williams in this photo from 2022.

Ron and Karen Eller, who skate with different partners, are shown Sept. 9 with some of the medals they have won this year.

Ron Eller skates with his partner Dorothy DeRemer in this photo from 2022.

Karen Eller skates with her partner Bill Williams in this photo from 2022.

Ron and Karen Eller are like many other couples in their 70s.

They like spending time together and with family and friends, as well as cheering on their grandchildren from the sidelines of some gymnastics meet or soccer match.

But watch the pair on a random weekend from October through August, and that might be where the similarities end.

For the past few years now, the Ellers have made the trek from Kokomo to Lorain, Ohio, where they typically practice up to 15 hours a weekend at a roller skating rink there, perfecting skills that will help propel the couple to the podium.

The Ellers have participated in roller skating competitions all across the United States for nearly 50 years now, and they have the hardware to prove it.

And lacing up the skates is a passion that Ron and Karen said began when they were just children.

“My uncle owned a skating rink,” Karen said. “I was about 5 when I started. Back in the day, that’s what the kids did. We went to the roller rink.”

The couple met at a roller skating rink in 1964, they said laughing, as if you needed any further clue that the sport is simply in their blood.

A few years later, the Ellers were skating at Kokomo’s Southside Super Skate — now where the southside Treasure Mart is — when a skating coach approached them with a proposition, Ron explained.

“We were there for a (skating) session, and the coach that taught us noticed we had good balance and all of that,” he said. “So he said, ‘Hey, what would you think about competitive skating?’”

The couple, who were in their early-30s at the time, said they jumped at the opportunity.

And even when Southside Super Skate closed down, the couple drove to Indianapolis to continue their competitive training.

It even became a family affair, Karen noted.

“We got our kids involved,” she said. “Our son started skating at age 5. Then our daughter, when she started walking, we put her on skates. I can still remember her falling, and the coach getting on the floor and showing her how to get up on the skates. They both were very good skaters and disciplined with it from an early age.”

Then the couple eventually found the Lorain SkateWorld Club out of Ohio, which competes in the USA Roller Skating Association (USARS) and American Roller Sports (ARS).

And the rest, they say, is proverbial history.

The Ellers compete in compulsory (patterned) dances in the “silver” category at their skating meets, and the pair admits that they’ve been pretty successful over the past few years.

It was at that point in the interview with the Tribune that the couple began to pick up and show off just a few of the many medals they’ve won this year alone as competitive skaters.

There were some from the USARS National Championships held earlier this year in Nebraska and a few more from ARS’ American Artistic Roller Championship in Colorado Springs, Colorado.

And though the couple doesn’t actually skate together — his partner is from Rhode Island and hers is from New York — the sport continues to bring them closer together.

“It gets us a lot of time with just the two of us because we’re in the car for four hours driving to the Cleveland (Ohio) area all the time,” Ron said. “When you’re in the rink, you’re pretty much separated, but it’s just something we get to have in common and something we get to share with each other.”

Karen agreed with her husband, adding that roller skating has also taught the couple several life lessons that they can use away from the rink, like self-confidence and dedication.

The pair noted that roller skating has tremendous benefits for their health too.

“I went to my family doctor this morning, and he told me that whatever I was doing, keep it up,” Ron said. “… When I had a knee replacement, the doctor told me that I had the quickest recovery of anyone he had because he said I worked out and was an athlete. He said, ‘Just keep skating.’ Then I had a valve replacement once, and I was back skating within six weeks. … A lot of people my age (76) can’t even get off the couch.”

The couple then spoke for a few moments about their future in roller skating, though they both hope this is something they can continue to do for years to come.

“People at work (Bona Vista), wonder why I’m still skating, and I tell them, ‘Because I can,” Ron said smiling.

Karen nodded her head in agreement at her husband’s statement.

“We both love skating,” she said. “When you put your skates on, you’re ready to take the floor and make progress and improve. And that’s really the fun of it. It’s the challenge of learning and the competition of it all that keeps me coming back.”