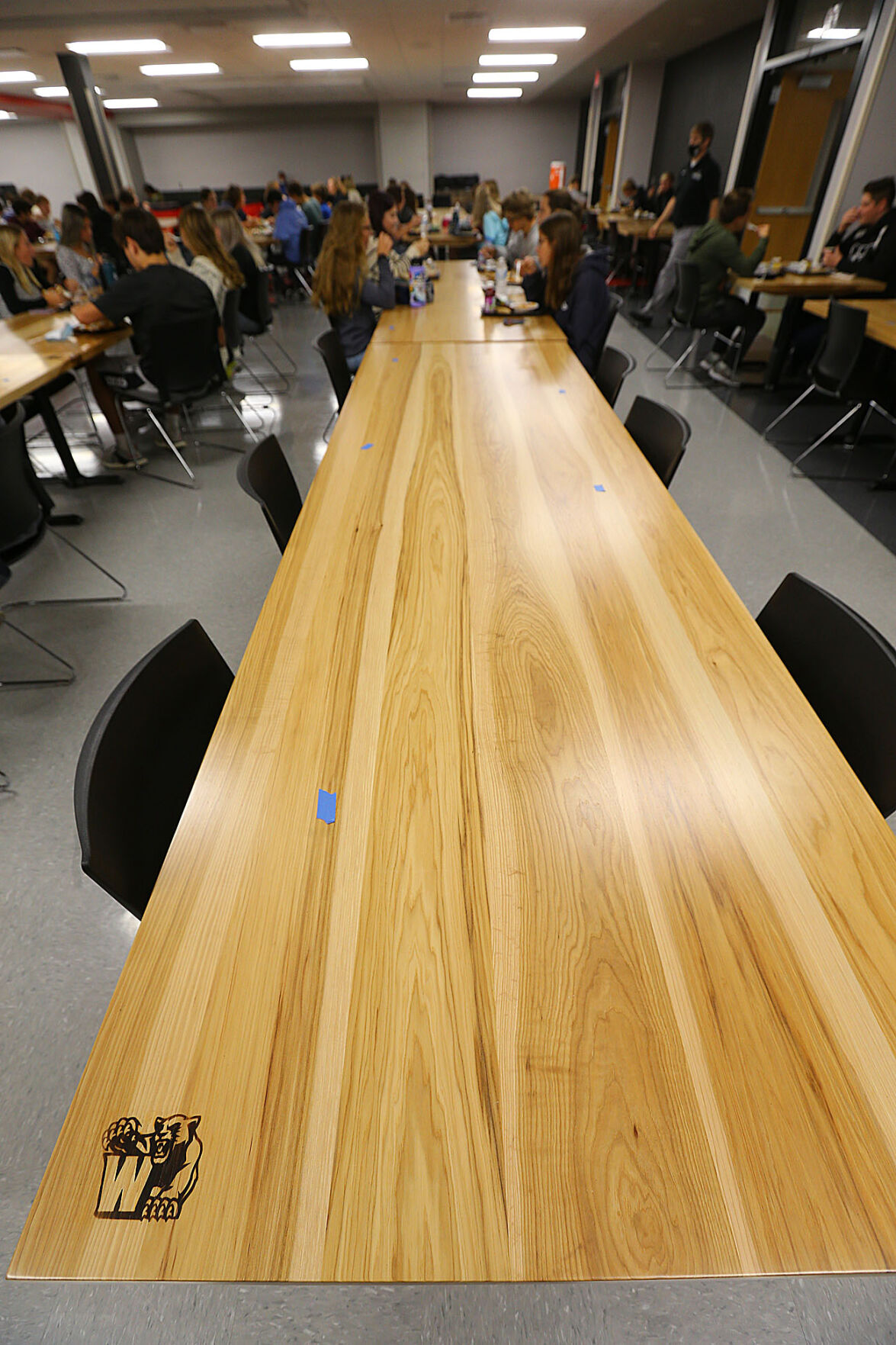 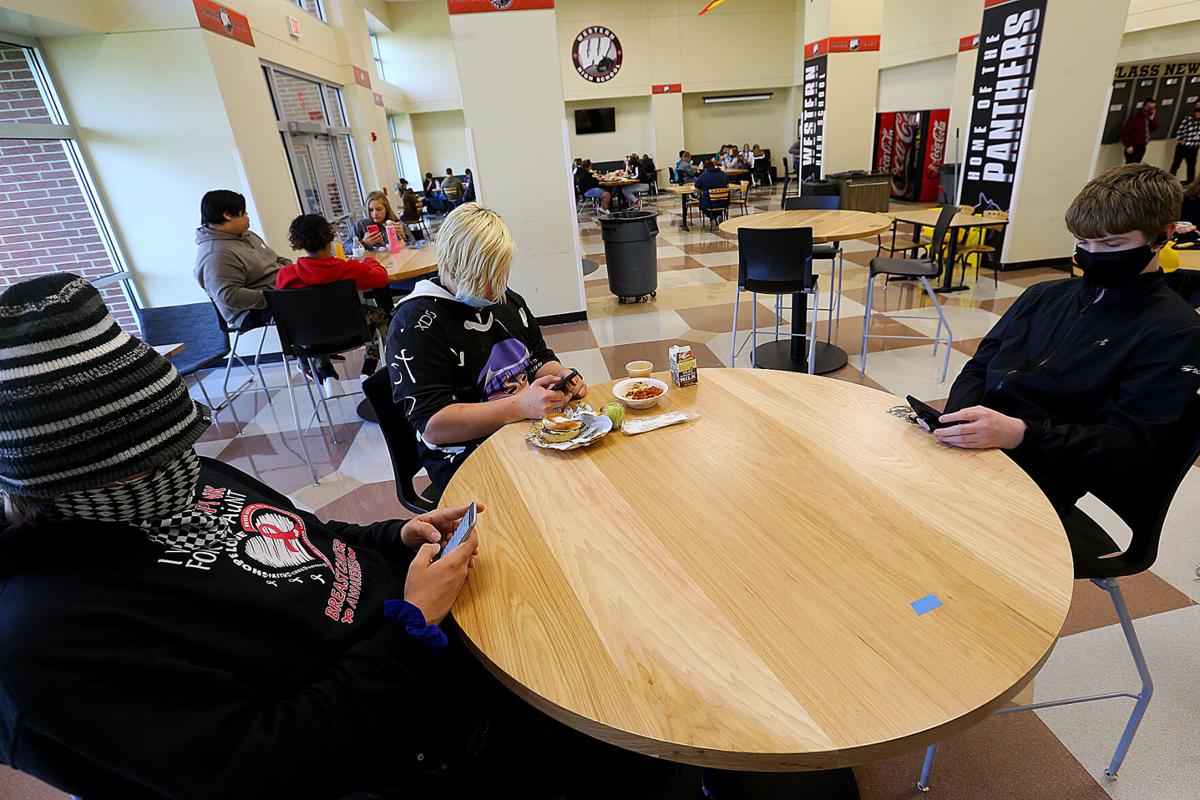 Western High School's new lunch tables in the cafeteria and commons that were made by inmates at Pendleton Correctional Facility. Ephraim Freeman, alan Anderson and Jaxin Phelps sit around one the new tables in the commons on Oct. 6, 2020. Tim Bath | Kokomo Tribune 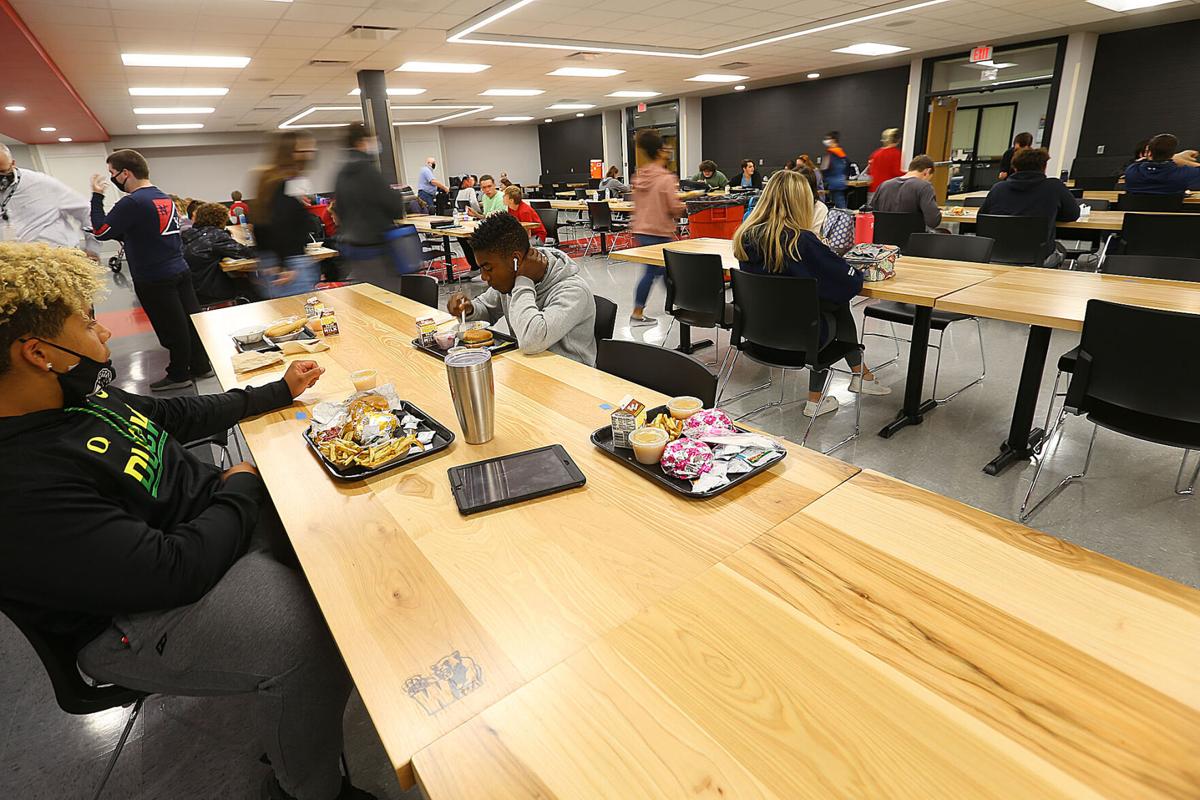 Western High School's new lunch tables in the cafeteria and commons that were made by inmates at Pendleton Correctional Facility. Ephraim Freeman, alan Anderson and Jaxin Phelps sit around one the new tables in the commons on Oct. 6, 2020. Tim Bath | Kokomo Tribune

When the students at Western School Corporation sit down to have lunch, they might not realize that lunch table is more than a place to break bread.

The 103 tables now in Western middle and high schools were made by Purposeful Design, a non-profit organization out of Indianapolis that has changed 135 men's lives. The organization works with men who are homeless, struggling with addiction, relationship problems and other difficult circumstances, teaches them woodworking and employs them for the long-term.

But getting those tables to Russiaville wasn't a straight shot. When the Western schools underwent its recent remodel, Assistant Superintendent Mark DuBois said he wasn't really thinking about furniture.

"Going through this process for the first time, I didn't really have furniture on my radar. I was looking at a brick-and-motor side of things," he said.

One of the consultants on the remodel was putting DuBois in touch with vendors and companies that supply schools with furnishings told DuBois of many companies, but took extra care when talking about the Indianapolis nonprofit.

"You might want to consider Purposeful Design. They make a really unique table and their story is really cool," DuBois was told.

Even before DuBois joined Western, some of the administration visited Pendleton Heights High School, where they also had the unusual tables, and were blown away. So, DuBois set up a meeting.

"These tables are unique, you don't see tables like these (in schools). We get catalogs for stuff like this all the time, and you wouldn't see anything like this. So, we were looking not only at a really cool table but their story is amazing ..." he said. "They're finding people in dire need, who are homeless or who have had other unfortunate circumstances and employ them, teach them a trade, and become these craftsmen."

Margaret Carter, of Purposeful Design, invited DuBois and other leadership staff from Western to come see the workshop. DuBois said seeing how tables are made from start to finish was great, but that wasn't the most impressive part of the visit.

"Some of the workers told us their story, what they've been through and how this has changed their lives," he said. "It was just an amazing experience to go there. Not only to see how those tables are made, the craftsmanship is just beautiful, but more important to see how these lives were changed because of this company."

David Palmer, director of Purposeful Design, said the nonprofit began from his time as a board member at Wheeler Mission Ministries, which is a large homeless shelter in Indianapolis. As he interacted with the men, the conversations repeated a crucial issue.

"I'd hear, 'I'm looking for a job,' over and over again,'" he said. "I always felt sorry for the person and wished I had a job I could give them. And, I was thankful that I had a job but I didn't have any solutions."

So Palmer decided to pray about it, and spoke with some other friends about it. That time of prayer eventually to the two tenets on which the organization stand: they wanted to create jobs for men who were struggling with poverty, addiction, homelessness and other difficult circumstances, and they wanted to make it a work of discipleship.

"We believe in on-the-job discipling, we aren't ashamed to bring faith into work," he said. "It is very much a place where we are at peace with God and each other."

Beginning the organization had a period of trial-and-error, trying to figure out how to create jobs, training and revenue for more jobs. Palmer said he happened upon someone repurposing shipping palettes into furniture, which he thought might be simple enough to learn.

"We literally just called it an experiment. We didn't know what we were doing, or where to go, but we just started doing it," Palmer said. "Within about a week or two, we realized shipping palettes were not the way to go for a lot of different reasons. ... Then we started using beautiful Indiana hardwoods to make beautiful furniture."

The organization began in 2013, but the actual business side of things started in 2014, Palmer said. The first year generated $37,000 in sales, and sales have grown since then. Last year's sales were about $1.5 million, with a total of $5.5 million sales since its inception.

The nonprofit's model isn't on a set period of time. Once employees are trained, they can stay on and work as long as they'd like, Palmer said.

"These folks need a long walk, rather than a short walk. They need to lose a lot of old ways and start a lot of new ways -- relationships, habits, ways of thinking, responsibility, behavior," he said. "So for our craftsmen, a long walk is much more in order."

The "long walk" way of operating also allows for a sustainable and consistent business model.

Purposeful Design doesn't make products to stock or have a catalog; every item is custom-made and handmade. Purposeful Design only deals in the commercial marketplace, so their customer base includes Lilly Pharmaceutical, Ball State University, Notre Dame University, and of course, Western School Corporation.

"I feel like I'm sitting on the front row watching God change hearts," he said. "It means a lot to me. I've seen, over and over again, men who have been radically changed. They go from hopelessness to hope, from isolation to living in happy, trusted communities. I see men who have been totally broken off from their family because they were a wrecking ball now they're back with their kids, with their wife, who trusts them now."

Purposeful Design accepts volunteers and donations. Revenue from furniture covers around most of operating costs, but not all, so Palmer said donations are greatly appreciated. Learn more about the organization and even how to learn some woodworking skills at pdindy.com.