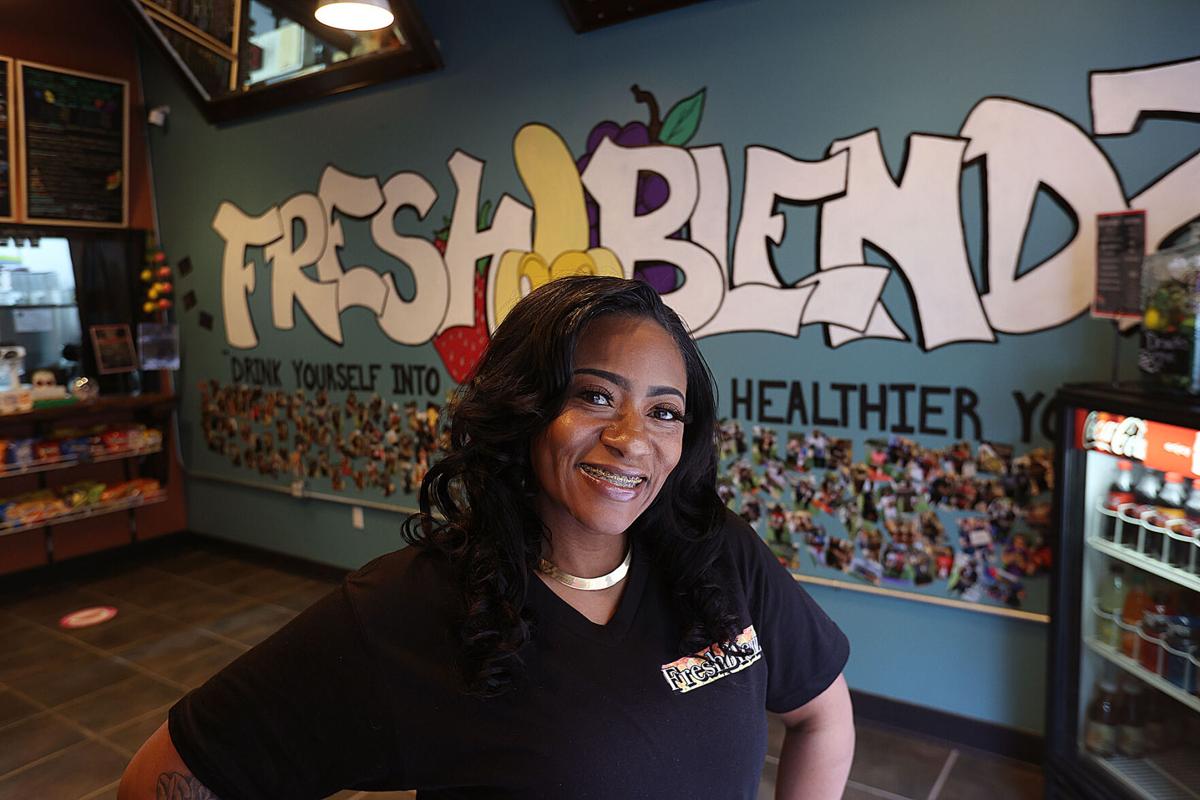 DeShawna Mims, who recently opened up FreshBlendz, a health-based drink store, said her blends helped her body create better cells after she was diagnosed with cervical cancer. She’s also proud to be continuing the tradition of Black-owned local businesses in Kokomo. 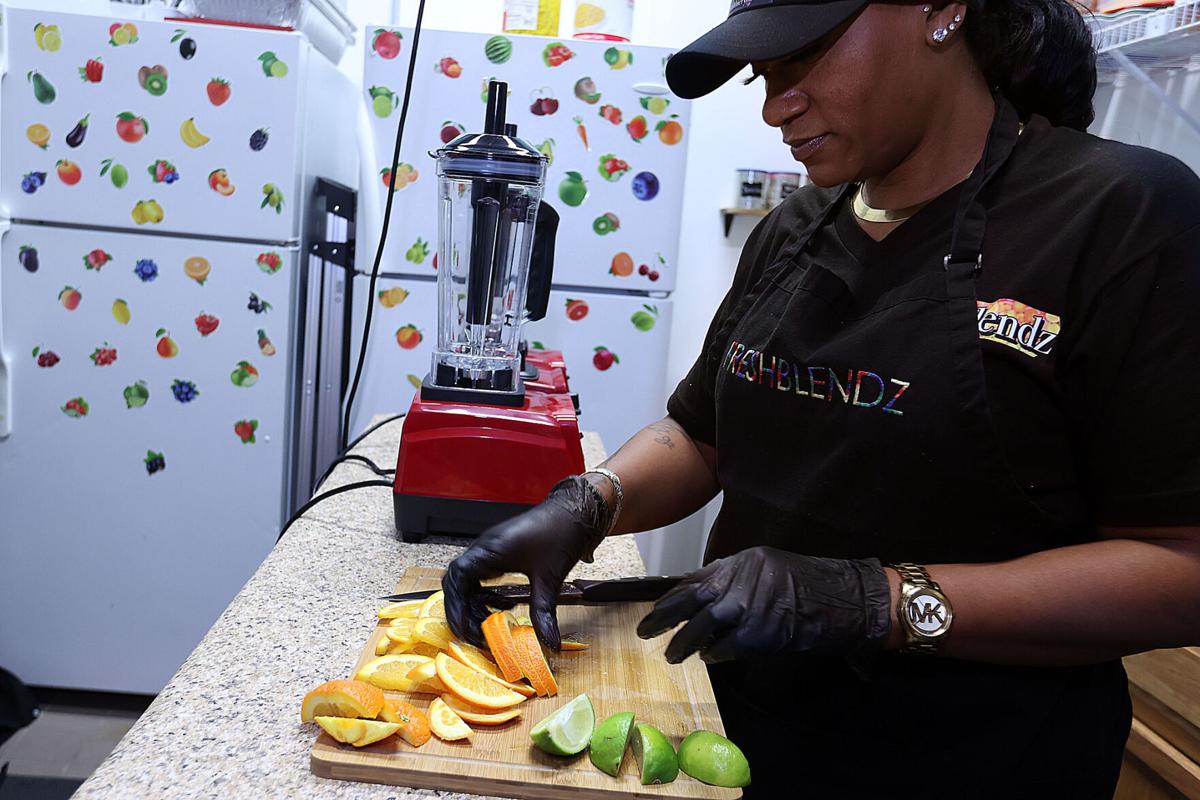 DeShawna Mims recently opened up her first storefront called FreshBlendz, which is a health-based drink store. 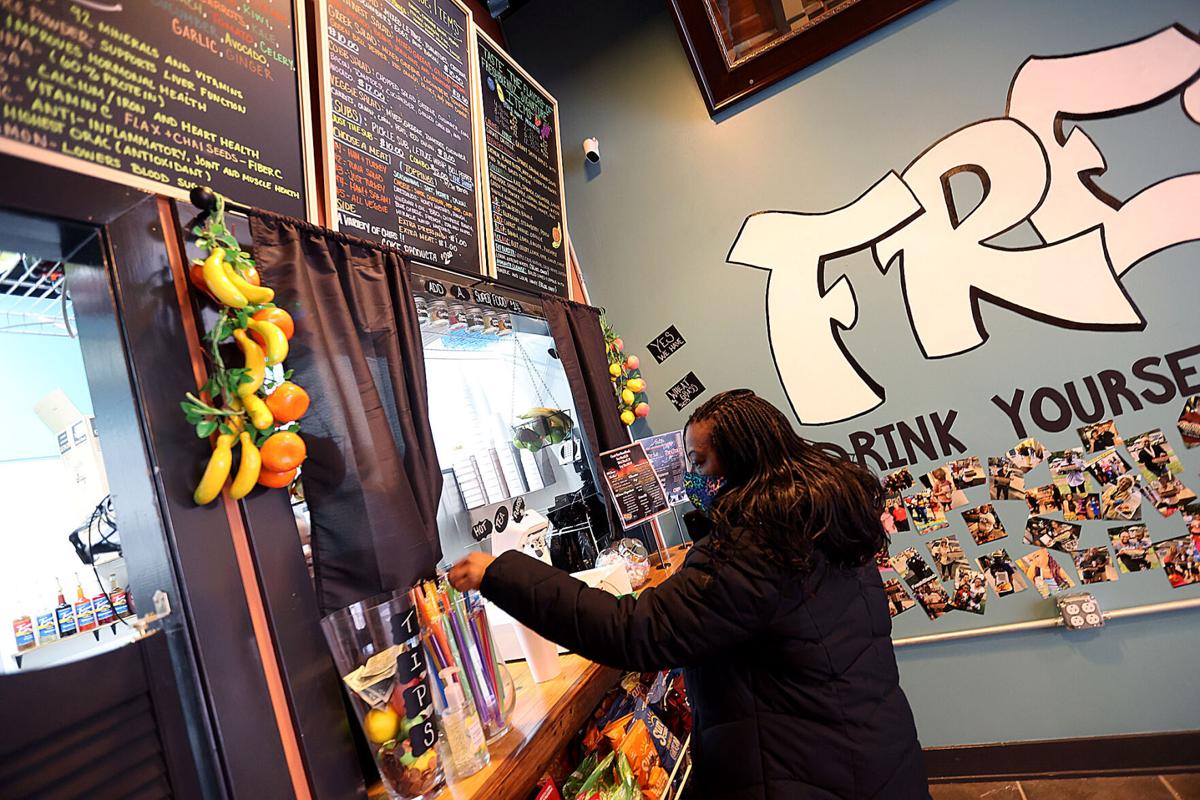 DeShawna Mims, who recently opened up FreshBlendz, a health-based drink store, said her blends helped her body create better cells after she was diagnosed with cervical cancer. She’s also proud to be continuing the tradition of Black-owned local businesses in Kokomo.

DeShawna Mims recently opened up her first storefront called FreshBlendz, which is a health-based drink store.

A few years ago, Kokomo resident DeShawna Mims was in the fight of her life.

Diagnosed with cervical cancer, Mims said she knew she didn’t want to necessarily go through certain procedures such as chemotherapy, so she began to do some research.

“I was really interested in how you can heal your body by way of what you eat,” she said. “ … I would learn about new things that could help, and I just began putting those ingredients together, like matcha powder and things like that. I would put them into blends to help my body create better cells. Over time, it did.”

Mims quickly learned that she wasn’t the only one who took notice of the help her organic blends were having on her body either, she noted.

And as people saw what she was drinking, they also wanted in on some of the action.

“I did my first booth and set up some fruity blends,” she said. “I did things like strawberry and banana or pineapple and peach, things like that. And people loved it. It blew out of the water. … After that, people just kept asking me when I was going to do it again. … So I began to brand and came up with a business name. FreshBlendz, because it’s all fresh ingredients.”

But Mims also knew that she wanted her business to have more than just a tear-away booth. She wanted a storefront to call her very own.

“I went to the local shop there downtown, and I took some of my products and signature items,” she said. “We just sat down and talked and found out what I was trying to do. He basically embraced my idea of my business and helped me develop it to make it a legitimate business. He even did the background paperwork and everything without me even knowing.

“Then he sent me the information and said, ‘OK, you’re a legit business now,’” Mims added. “I really do owe so much to him.”

And a little over two years after that interview, Mims’ FreshBlendz store is now officially open to the public, located at 2130 W. Sycamore St., in the Forest Park shopping center.

FreshBlendz sells all natural and organic food and blends, and it’s even Kokomo’s home for the “pickle sub.”

“I have signature items like carrot, mango and orange blends,” she said, “and I also have banana, lemon, ginger and pineapple. … The reason why I stick more to the word blend and not smoothie is because the machines that I typically use blend the whole fruit or veggie. They can even blend an avocado seed into liquid, so you’re getting way more nutrients than you would from a smoothie.”

The blends appear to be working too, as evident from the many customer testimonials that occasionally appear on Mims’ Facebook page.

And it’s that positive impact that Mims has on others that she said is most rewarding.

“It’s just God sent,” she said, referring to FreshBlendz. “I just know this is something that God wanted me to do. I know that it’s going to help so many people in so many ways. … And it’s really just about helping people, meeting new people and learning how much I can impact their health.

“I hope that FreshBlendz brings a clean, crisp and fresh environment to people,” Mims added. “I also hope that it’s a place that people will come to and that it can even be a healing factor for those who are sick or just want a healthier lifestyle.”

But as a Black female business owner in Kokomo, Mims said FreshBlendz is also about creating a legacy for her three young children.

“We have to lay the foundation for the up and coming generation,” she noted. “I’m just happy that as a single mother, I can provide that for my children. … I hope they can also build that independency within themselves because I’m a true believer in self-employment. So it’s just about instilling in them that sense of independency and financial stability. It’s kind of about health, wealth and prosperity I guess.”

Mims then paused a moment before beginning to talk again about her kids, including her 14-year-old son, a FreshBlendz employee.

“This is a perfect city to start a new business in,” she said, “and we’re doing well here economically. So I just want to teach my kids to look at all those different factors. Look around you, and look at what you can do to make where you are better for someone else.”