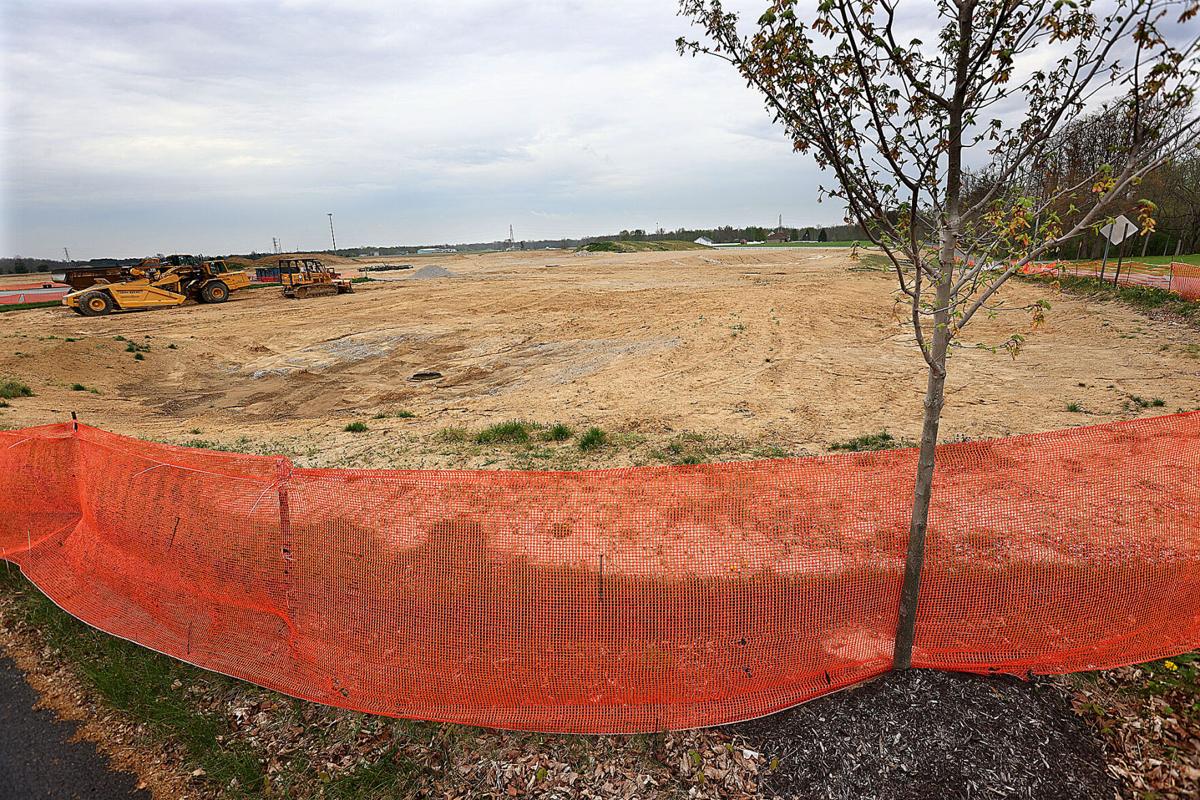 The area east of Eastern schools is pictured April 28. The 40-acre site will be the new home of Eastern Comets athletics within the next couple years. High school and youth baseball and softball, plus tennis, will move to the new sports complex once facilities are completed. 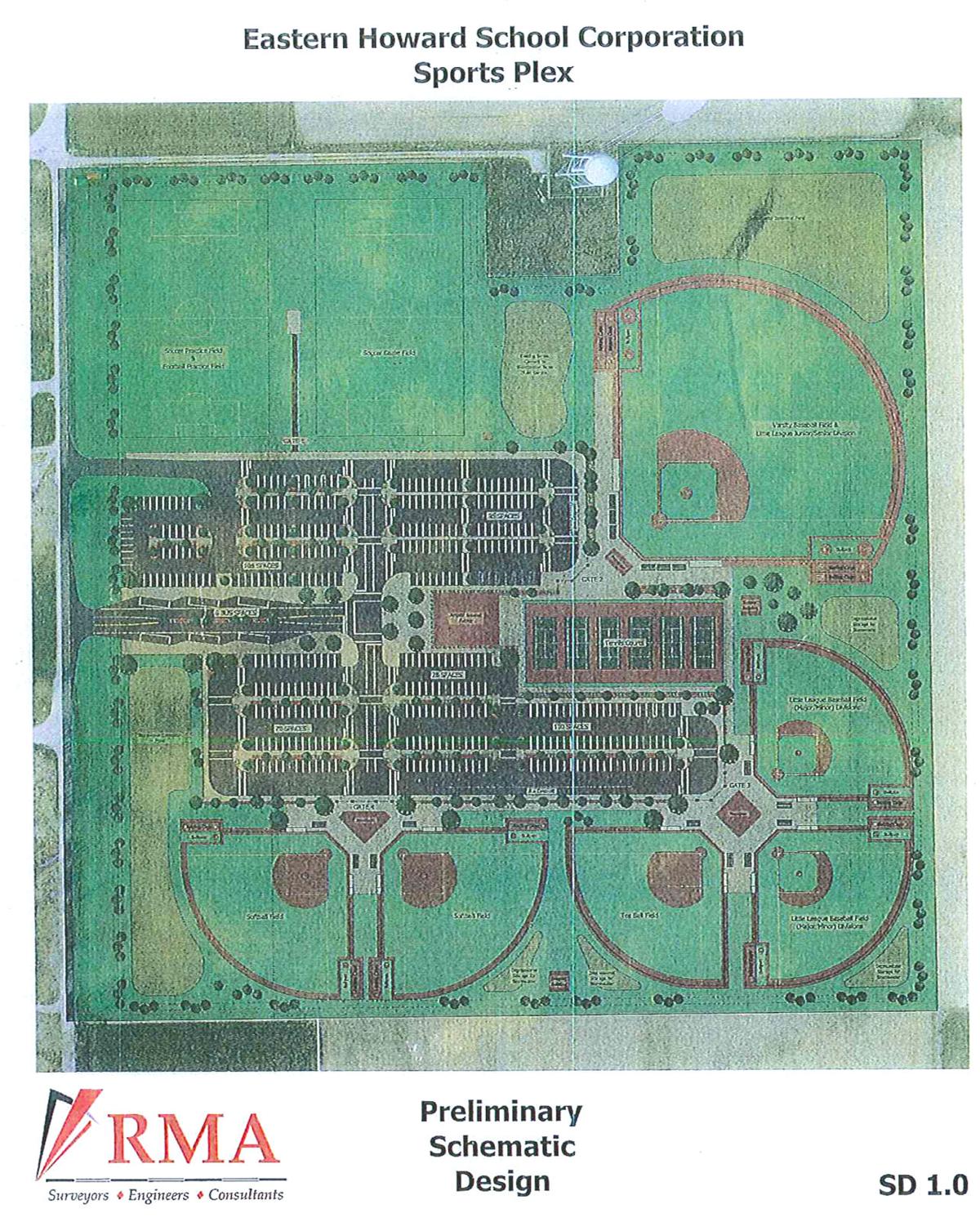 This is an artist rendering of what the Eastern Howard School Corporation athletic complex will look like when completed.

The area east of Eastern schools is pictured April 28. The 40-acre site will be the new home of Eastern Comets athletics within the next couple years. High school and youth baseball and softball, plus tennis, will move to the new sports complex once facilities are completed.

This is an artist rendering of what the Eastern Howard School Corporation athletic complex will look like when completed.

GREENTOWN — Minus a couple soccer fields, a 40-acre field just south of the town limits isn’t much to look at. At least not yet. But in the near future, it will be the site of a new athletic complex.

Eastern Howard School Corporation is undertaking a $20 million project that is expected to begin later this year. Some construction work is ongoing to make the site ready to build. The sports complex is located on the eastern side of S. C.R. 850 East.

Eastern will also build a fieldhouse at the high school which will connect to the pool. With the new fieldhouse, Eastern will join the ranks of the other Howard County schools that have completed similar projects.

The indoor pool will receive a major renovation to its plumbing system.

Most importantly, school officials stress, the new complex will not raise taxes.

The district will make its final payment at the end of this year on a bond that financed the performing arts center. A new bond will be issued to afford the athletic complex.

The site of the complex has long been farm ground Eastern rented to a local farmer. When the soccer fields were moved from the high school to make way for a solar field, it got officials thinking.

“The school board and administration has decided this is the best use of the funds,’” said business manager Travis Hueston.

The new fieldhouse will have three basketball courts plus a three-lane track. The additional courts, plus more locker rooms, should alleviate scheduling issues.

“There’s about a month or so overlap where it gets really busy,” Hisner said.

He said the additions will keep teams from practicing late at night and give lower grade levels more opportunities to practice.

The athletic director gave the example of when a swim meet, wrestling match and basketball tournament happens simultaneously. Locker room space becomes scarce and sometimes teams can only change in them, instead of also storing their gear.

“It’s going to alleviate a lot of issues,” Hisner said.

The district also sees opportunities on the education side.

The additional space can be used during testing season when students need to be spaced out.

“We’re hoping to leverage all areas not just for athletics but also for academics,” Brown said.

The pool will see its first major upgrade in probably 50 years.

Hueston said renovations to the HVAC system will improve air quality and help filter pool chemicals out of the air, which can corrode infrastructure. The district is also looking at how it can use pool water heat to heat the building.

An observation deck will be built above the locker rooms and overlook the pool. This will increase seating capacity and make the area around the pool less cramped, Hueston said.

“I really believe we will have the nicest facilities around when we finish the 40 acres,” said superintendent Keith Richie.

The baseball and softball diamonds are not part of the next phase of construction. Those will follow in the coming years. Hueston said the entire athletic complex is expected to be completed within the next five years.

Eastern hopes to come in under the $20 million dollar budget. It will make some small, future projects possible.

“We’re confident we can do all this for $20 million,” Hueston said.

Once construction is completed, there will be considerable space at the middle and high school campus.

This space is eyed for a new school.

Richie said that in about 20 years, Eastern will need a new school. Whether that’s just a new middle and high school or an entire K-12 building is to be determined.

Richie and many others making the decisions now will not be at Eastern when that time comes. It’s a long-term vision but one that requires foresight now, the superintendent said.

Hueston said the district will engage in some refinancing that will make between $60 million and $80 million available around the time they estimate a new school will need to be built.