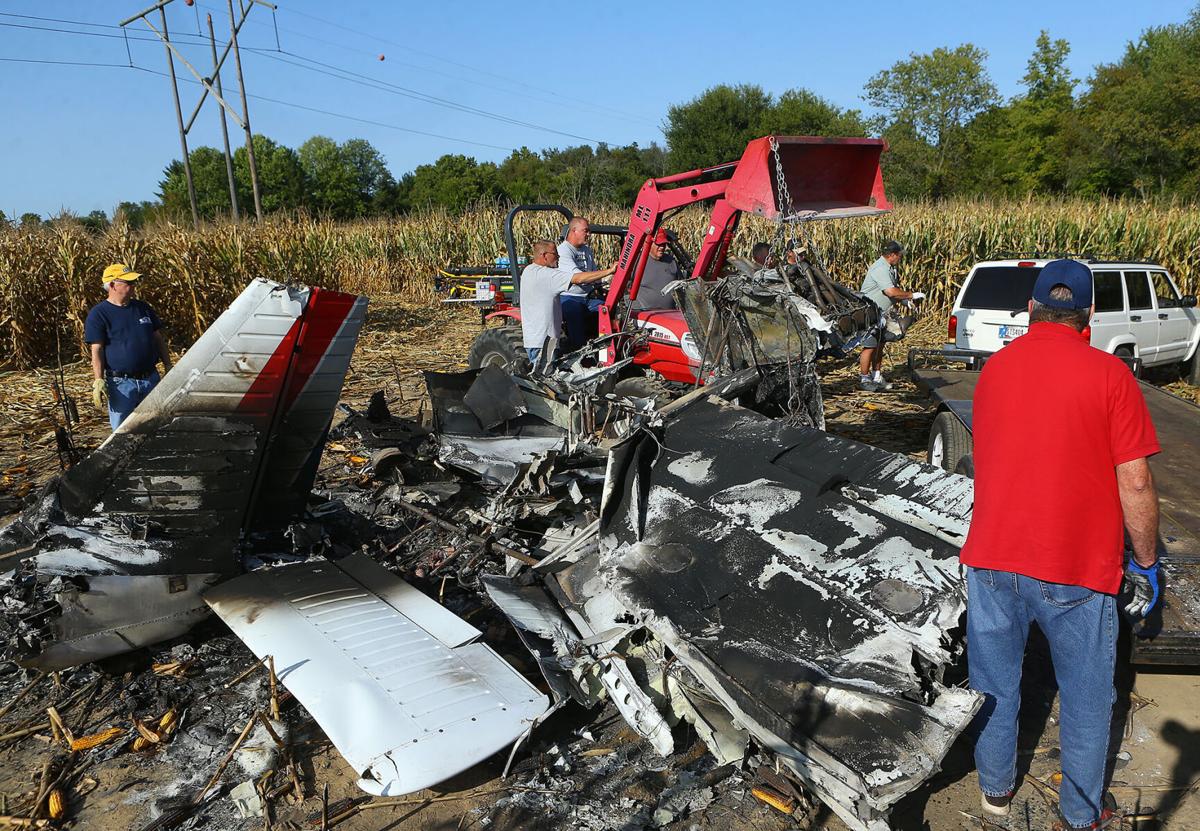 Glenndale Airport workers clean up the site and remove the wreckage on Monday, September 21, 2020, from Sunday morning’s plane crash that killed three people and had one survivor. On Sunday morning, a Piper PA-32 was attempting to land on one of Glenndale Airport’s runways when it struck a large high-tension wooden power line pole, causing the airplane to nose-dive into a nearby cornfield. Kelly Lafferty Gerber | Kokomo Tribune 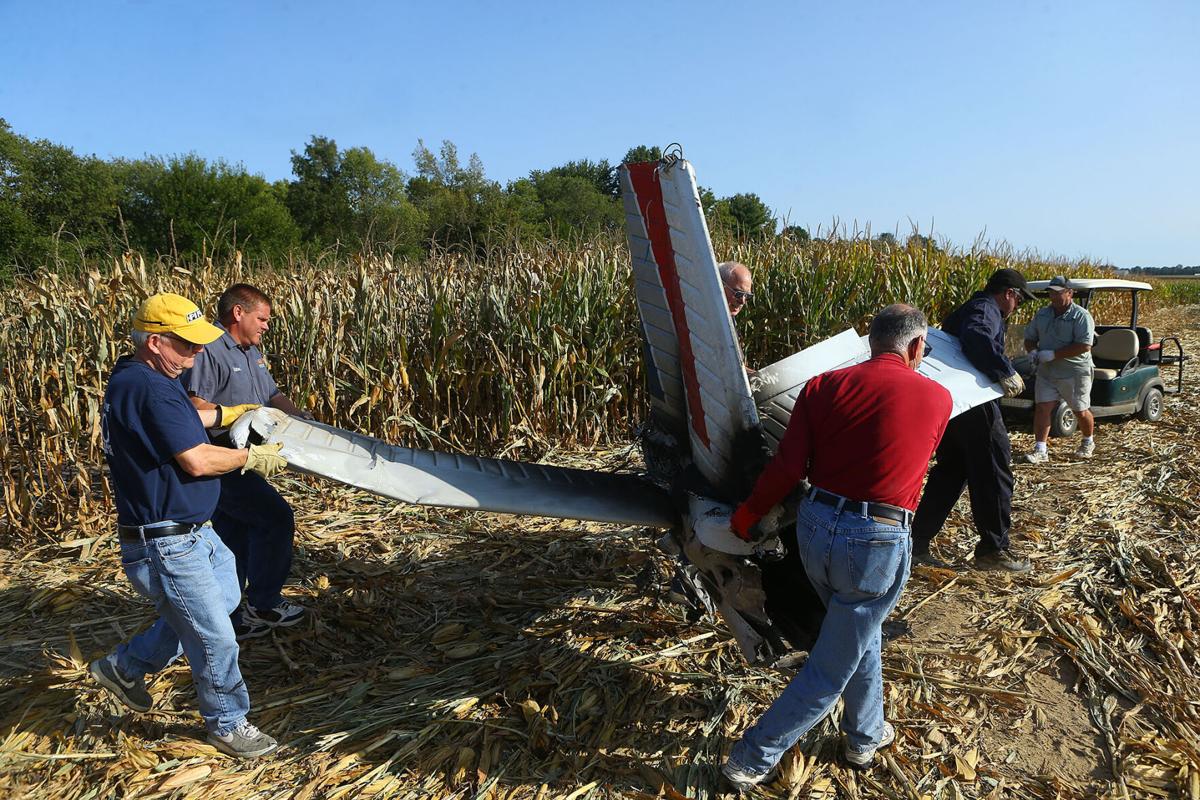 Glenndale Airport workers clean up the site and remove the wreckage on Monday, September 21, 2020, from Sunday morning’s plane crash that killed three people and had one survivor. On Sunday morning, a Piper PA-32 was attempting to land on one of Glenndale Airport’s runways when it struck a large high-tension wooden power line pole, causing the airplane to nose-dive into a nearby cornfield. Kelly Lafferty Gerber | Kokomo Tribune

A local aviation enthusiast and two Hamilton County brothers with aspirations of joining the United States Air Force were identified by authorities earlier this week as the three killed during a plane crash near Glenndale Airport last Sunday.

According to a Monday afternoon media release by the Howard County Sheriff’s Department, Jerral “Jerry” Long, 63, Kokomo; Reece Kelly, 15, and Liam Kelly, 17, both of Carmel; and Cameron Wagler, 17, Greentown, were volunteering at the airport’s “Glenndale Days,” a private celebration of the local chapter of the Experimental Aircraft Association [EAA].

The four were also members of and associated with the group the “Flying Squirrels,” an organization geared toward helping youth ages 14-18 learn how to fly various aircraft.

HCSD’s release indicated that before festivities got too busy on Sunday morning, Long, the Kellys and Wagler decided to take a quick flight in a Piper PA-32 at around 11 a.m.

Upon attempting to land a few minutes later, authorities stated that the plane struck a high voltage wooden power pole, causing it to nose dive and subsequently crash into a nearby cornfield.

Long and the Kellys died upon impact, and Howard County Coroner Dr. Steve Seele said on Tuesday their deaths are consistent with a blunt force trauma incident.

Wagler — who told authorities that he was seated in the rear of the aircraft when the crash occurred — was alert and conscious when first responders arrived on scene.

He was later transported to an area hospital in stable condition.

Investigation into what caused the single-engine aircraft to come into contact with the power lines in the first place is still ongoing at this time.

News of the crash quickly spread on social media as early as Sunday afternoon, as did the tributes once investigators officially released the identities of those who died.

In a lengthy Facebook post from the Commemorative Air Force, Indiana Wing — of which Long was a member — the organization called itself a “brotherhood and sisterhood of people who are passionate about aviation” and that Long shared that same passion.

“We are united in our desire to share this passion [aviation] with others through various nonprofits, museums, airshows, and events like this throughout the United States, as was Jerry,” their statement read in part. “We ask that you keep the families and friends of those involved in this accident in your thoughts and prayers in the difficult days ahead.”

Kokomo’s chapter of the EAA also addressed Sunday’s crash on social media, stating earlier this week that the airport community and families are devastated.

“It is with great sadness today that we mourn the loss of our fellow pilots, friends and family,” the statement read. “… Please pray for these families and everyone involved.”

And at Westfield High School, where the Kellys attended and both ran cross-country, the team issued a statement via Twitter on Monday morning along with photographs of the two teenagers in action.

“We are overwhelmed with grief as we announce the tragic passing of Liam and Reece Kelly,” the team’s post read. “Our friends. Our teammates. Our brothers. We love you, we will miss you, and we will carry you with us forever.”

According to their joint obituary, the Kelly brothers both had a passion for aviation and had dreams of one day taking that passion to the U.S. Air Force Academy in Colorado.

A senior, Liam was also a member of Westfield High School’s National Honor Society and French Honor Society, while sophomore Reece had previously been in the school’s band.

They also enjoyed helping their grandparents around the house and were quite active in their church and local community, the obituary noted.

As for Long, who retired in March 2018 from Delphi Automotive after 43 years as a project manager, aviation was a “passion and hobby,” his obituary stated, and he was also active in the organization SAWS, which helps build ramps for the infirm.

But his greatest loves were his faith and his family, Morning Star Church Pastor Greg Reed told the Tribune on Tuesday afternoon.

“Everything about how he lived his life, you know, it was like, that’s how we ought to do it,” Reed added. “That’s how we should live life. … All of those qualities, the whole loving God and loving people, he modeled that so well and showed what it looked like to live out a personal experience with Jesus Christ where he lived, where he worked and where he played. He was the same person all the time.”

Memorial services for the Kellys will also be held on Friday in Noblesville at Grace Church, 5504 E. 146th St. The service begins at 7 p.m., with visitation running from 4-6:30 p.m.