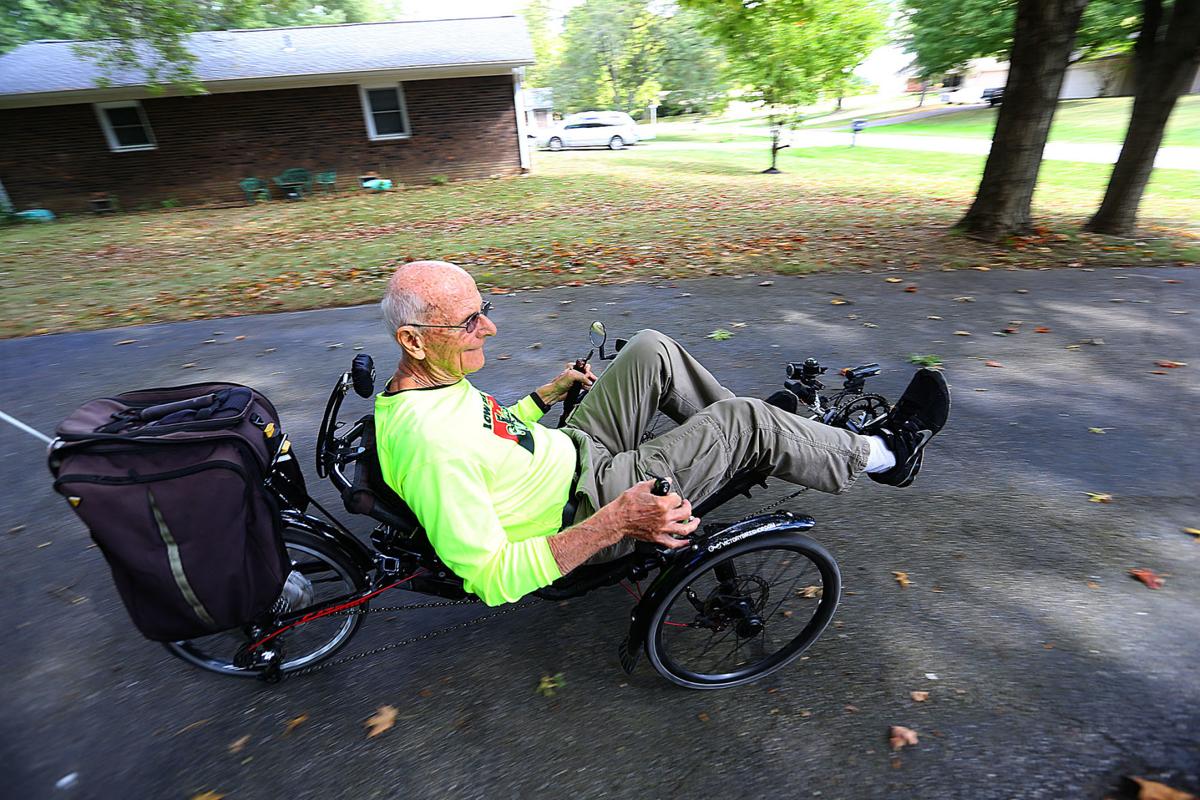 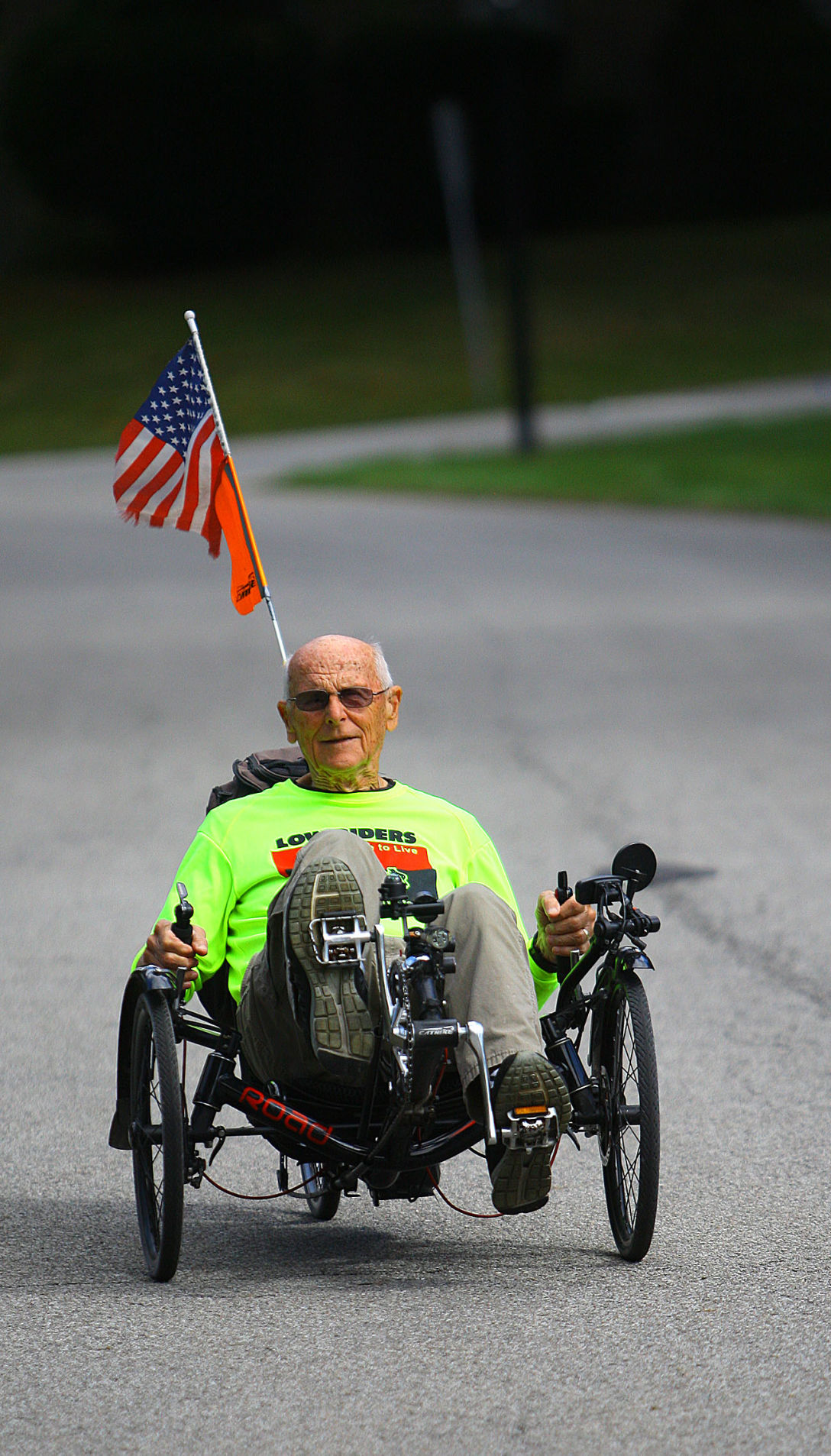 Ken Gulla didn’t want a pile of presents or a big party for his 87th birthday last month. All he wanted was a chance to do one of his favorite things in the world.

And that’s just what he did. On Sept. 19, four days after he turned 87, Gulla hit the road and biked all the way to Gas City, turned around, and headed home.

That’s right. Gulla celebrated his 87th birthday by biking his age – and going on a ride that would leave people far younger than him sore and aching for days.

“I just love getting out into the country and riding,” he said. “I just wanted to be out there and not have any pressure to hurry up and get back. I wanted a long, enjoyable ride. To me, that was a good birthday present.”

Gulla, who worked as an engineer at Delco for 30 years before retiring, has been a long-distance biker for decades. He’s also been a founding member of a number of local bicycle clubs, including groups that ride recumbent bikes and low-riding trikes.

After retiring, Gulla joined up with a group of biking enthusiasts who, every week, took an entire day to bike to various locations all over Indiana.

He ended up biking in the Hilly 100 in Bloomington 16 times. The ride spans two days and requires bikers to ride 50 miles each day up and down the rolling hills of southern Indiana.

But finding time for his favorite hobby has gotten hard ever since Gulla’s wife was involved in a serious car accident in January 2018. The crash put her in an intensive-care unit for over a month, and left her wheelchair-bound and in need of nearly constant care.

Now, the only time Gulla has for bike rides is when a home nurse aide comes to their house for four hours on Thursdays. That’s when he hops on this low-ride trike and bikes as far as he can before he has to return home.

So when his birthday was approaching in September, Gulla couldn’t think of anything better than taking one of the long bike rides that he loved. He asked his son, Brent, if he could come on Thursday to watch his mom while he spent the day out on the road.

“When he asked me, it was a no brainer,” Brent said. “A man that age, what do you get him? That’s the best gift I could give him was to watch my mom so he could go complete this task he wanted to do.”

Gulla ended up taking off right from the front door of his house, located on the city’s south side, and biking down country roads until he hit the Sweetser Switch Trail. He rode that and then almost made it to Gas City before the odometer clicked over to 43.5 miles.

Then he turned around and rode the same way back to his house. Gulla ended up pulling into his driveway at around 7 p.m. with 87.4 miles logged on the odometer.

Brent was there to greet his dad at the house after his day on the road.

“After the ride, he said, ‘Alright, it’s time to feed mom and get her to bed.’ He was ready to get back caring for her,’” Brent said. “It’s almost like he’s Superman.”

But Gulla doesn’t see it that way. He said he’s happy to care for his wife. But even so, it was pretty great to spend the day on his bike, he said.

“Doing something like that, it helped me get away for a while,” Gulla said. “It’s just the fact of getting out in nature. It’s like being free, you know?”

And even though he’s now 87, Gulla doesn’t have any plans to stop biking. Not at all. He said his goal is to bike 4,000 miles by next September, either outside on his trike or inside on his stationary bicycle.

“I was thinking maybe when I hit 100, I might quit,” Gulla said with a laugh.

Brent said his dad has always been determined and driven to never stop. And it’s that determination to keep going that makes Gulla one-of-a-kind.

“It’s amazing,” Brent said. “Any time biking comes up in conversation, I tell people my dad is 87 and still out going on these long rides, and everyone is always like, ‘Whaaaat?!’ I say, ‘It’s true, believe it or not.’”

Low Riders trek on with trikes

The Low Riders might be a little lower these days, but nothing has slowed down a group of local men from continuing to ride the back roads of …