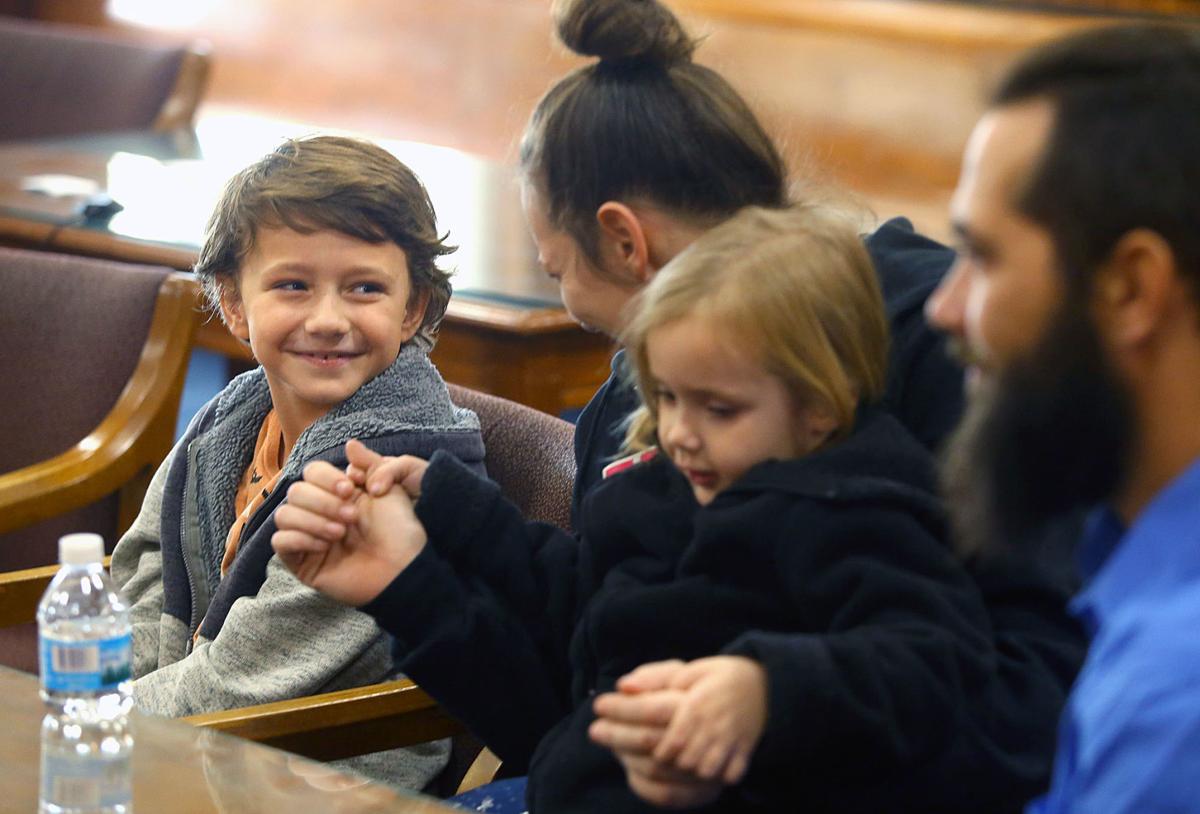 8-year-old Noah Crew, left, grins as he looks over at his mom Courtney, 3-year-old sister Gabby, and his dad Robert after officially getting adopted at the Howard County Courthouse on National Adoption Day, Friday, November 22, 2019. 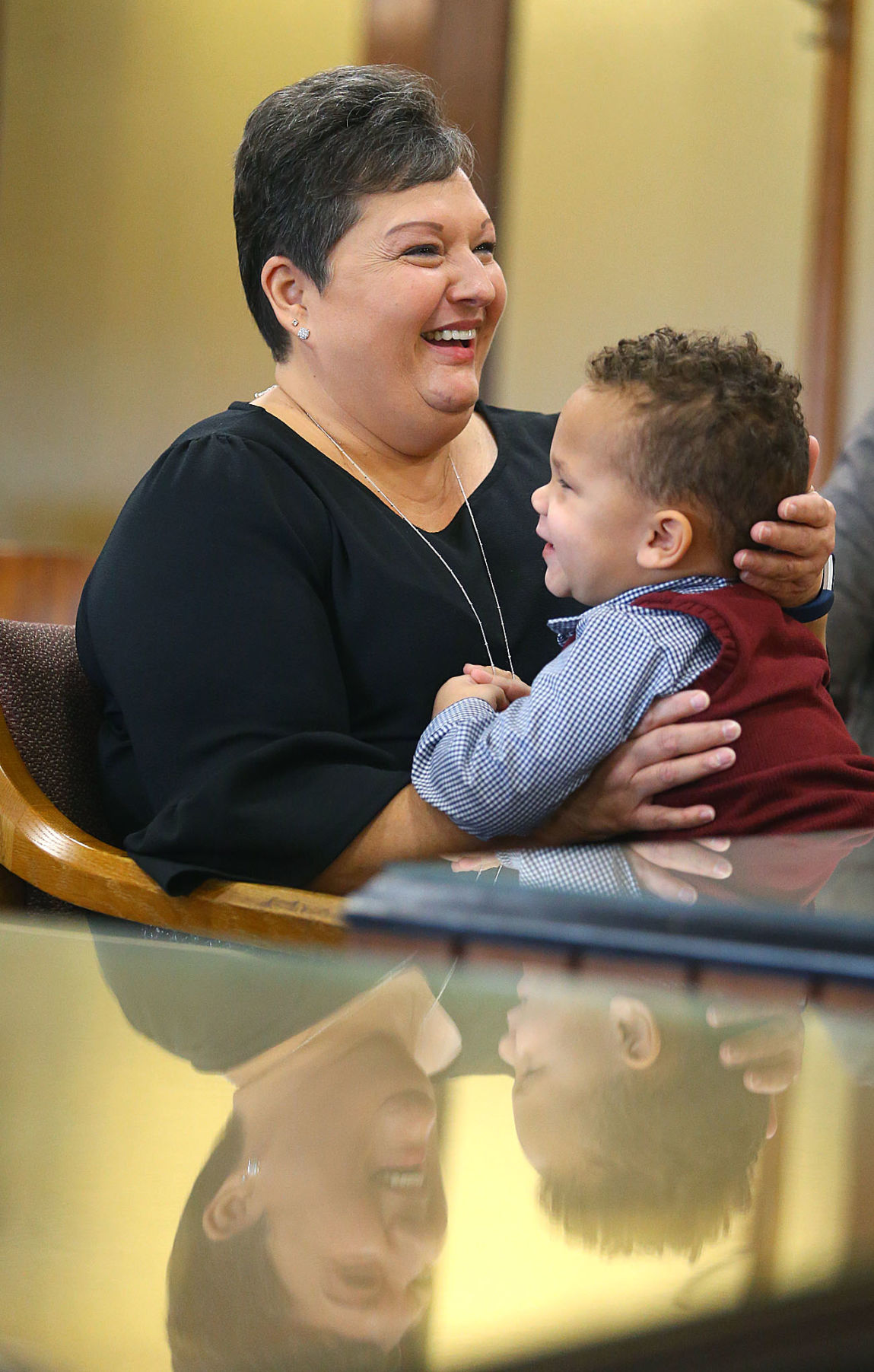 8-year-old Noah Crew, left, grins as he looks over at his mom Courtney, 3-year-old sister Gabby, and his dad Robert after officially getting adopted at the Howard County Courthouse on National Adoption Day, Friday, November 22, 2019.

Today, while millions gather around the country to celebrate the Thanksgiving holiday, a few Kokomo residents will be reflecting on a love that has come full circle this year and the proof that family comes in all different shapes and sizes.

Two-year-old William had an unconventional start to his life.

Dropped off in early-2018 at a distant relative’s house by a stranger after his mother was arrested, the little boy’s life could have turned out completely different had it not been for the persistence and love of Dea Kent.

“He was really cute, kind of chubby, really friendly and affable,” Kent said, referring to the first time she met William. “He was just sweet, and I was happy to meet him.”

Kent is William’s biological great-aunt, but she’s also been the toddler’s guardian and “Mommy” since June 2018.

“I didn’t want to put him in the foster system because he’s family,” Kent said. “And even though I’m a non-traditional 54-year-old mother of two grown children [Kelly, 22, and Cody, 27], it didn’t feel right to not do something. I wasn’t raised that way, and I couldn’t face myself in the mirror and think, ‘Well, was I too busy or something?’ So it [caring for William] was just the way it needed to be.

“It was heartbreaking to have something like that happen in your family, but ultimately he won us over from the beginning,” she continued.

And last Friday, Nov. 22, during National Adoption Day, it was all made legal.

Sitting inside Howard County Circuit Court during the adoption hearing, William Joseph Kent hugged his mother’s neck tightly and played with her jewelry like most 2-year-olds tend to do.

And when asked by Howard County Circuit Court Judge Lynn Murray about why she wanted to adopt William, Dea paused for a moment, looked at the little boy and began to cry.

“I want him to be a part of a predictable family,” she said, wiping away her tears.” “It’s not perfect, but it’s predictable.”

Many of those family members were in attendance during Friday’s adoption hearing, Dea noted, all a part of William’s new environment of love.

As for Dea, Friday’s events were just the culmination of a long road full of questions, challenges and hope. But it was all so worth it, she said.

“It felt so good when Judge Murray said, ‘You’re mother and son,’” Dea said. “We always thought of Will as a bonus baby, a nice baby who happened to be my great-nephew that I didn’t even know existed. And I got to tell you, I don’t feel a different love than I do for my daughter or [other] son. It’s very ferocious and tenacious and mama bear like, and it’s difficult to logically wrap my head around how much I love him.

“We love our parents, and we love our significant others,” she continued. “And it’s weird but neat to know that that can happen [with a child] when you don’t help in the creation process.”

Dea then began to talk about the hopes and dreams that she has for her youngest son and the opportunities that have opened up for him since the two met all those months ago.

‘All Crews on board’

It was hard to miss the smile that ran across 8-year-old Noah’s face as he sat in Howard County Circuit Court last Friday. Every so often, the young boy would pause and give a side-eyed glance to his younger sister, Gabby, and then he’d smile again as he looked up at his parents, Robert and Courtney Crew.

For the family, Friday’s adoption hearing was six years in the making, and the four of them couldn’t contain their excitement.

Noah — a child of Courtney’s from a previous marriage — had thought about the day that Robert would legally adopt him for several months now, his parents said.

“And now it’s all Crews on board,” Noah said, trying out his new last name while still beaming in the hallway after the hearing’s conclusion.

Robert entered Noah’s life when the boy was just 18-months-old, and the pair have come a long way, they both said.

“When we first got together, she [Courtney] couldn’t even leave me in the room with him [Noah] without him screaming,” Robert claimed. “It was a good six months before he’d allow himself to be left alone with me. … But he eventually made the choice on his own to call me dad, and now he follows me around everywhere.”

Because for the Crews, family isn’t always about sharing DNA.

“It’s all about spending the time doing the job, and sometimes it’s just a waiting game and a matter of time,” Robert said, when asked about step-parents taking on a parenting role with their step-children. “Just make sure that that support system is there. … That’s what makes it the easiest. Regardless of what the judge said today, that’s my boy. He always has been, and he always will be.”

Murray noted that most of the roughly 70 adoption cases that Circuit Court sees every year are often like William and Noah [adoptions by family members or step-parents]. And while each one is different, Murray said the outcome is always the same.

“We’re forming a legal relationship that didn’t exist before between a parent and a child,” Murray noted. “... These are our most favorite hearings to do, and it’s the only hearing I can think of that it’s a positive outcome. … It will affect these children for the rest of their lives in a more positive way, and there’s no greater part of work.”

Susan Tobin works with the Indiana Adoption Program, an initiative of the Department of Child Services, and she is also an adoptive mother of five.

Tobin and her 14-year-old son, Dakota, were also at the courthouse last Friday celebrating National Adoption Day, and she noted that Friday is a day that the Kents and Crews will never forget.

“Family is not always defined by blood, “Tobin said. “Sometimes they’re born in our hearts. … For these children, this is a new beginning. It’s a day that becomes a very special day for them where they can see that a family stepped up to say, ‘You’re my child now, and you belong to this family.’”

And though neither of the children being adopted on Friday were ever in the Indiana foster care system, Tobin said there are roughly 100 children across the state that are currently looking for their forever homes.

For Tobin, that’s 100 children too many.

“So there are about 15% needing homes, and they are often older children or sibling groups,” Tobin continued. “Those are our highest needs, but they’re not always teenagers. Sometimes they’re just three, four or five years old. But those are still our biggest needs that we have right now in Indiana.”

You don’t have to be a perfect parent to adopt a child either, Tobin noted. You just have to be willing.

“I can say that adoption is one of the best things I ever did, and it forever changed my life,” Tobin said. “It made me a better person. It turned out it wasn’t just me helping them. It really was them helping me.”