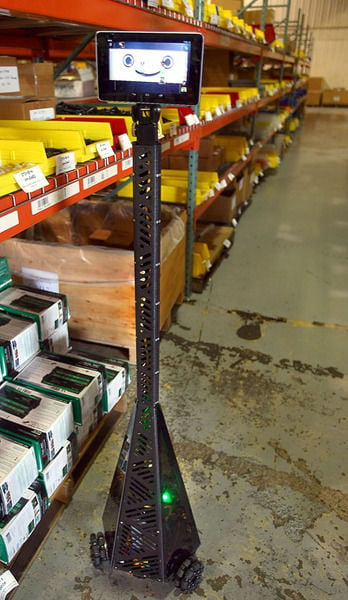 Hello: AndyMark robot "Mandy" taking a tour of the warehouse. 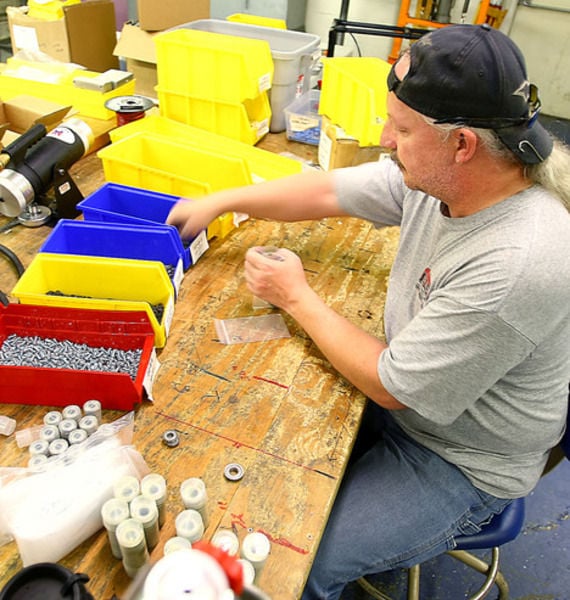 Hello: AndyMark robot "Mandy" taking a tour of the warehouse.

This week marked the biggest accolade to date for Kokomo robotics firm AndyMark, which two years ago outgrew its incubator stage and moved into a new home on North Washington Street.

Continued rapid growth since then has landed the company, which designs and distributes parts and systems for use in robotics, on the Indiana Economic Development Corporation’s annual “Indiana Businesses to Watch” list.

More than 300 businesses were nominated for the award, but only 33 made the cut. The IEDC looks at a variety of economic benchmarks, submitted by the companies, before making its selections.

That’s no mean feat for a business which started in vice president Mark Koors’ basement.

Started through Koors’ and AndyMark president Andy Baker’s involvement as adult mentors in the high school FIRST robotics competitions, AndyMark has quickly become the first name in suppliers for the competitors, going from a startup at the Inventrek business incubator to a business with 15 full-time employees and more than 20 part-time workers.

“We started using our house, and when it got into the dining room, I told Andy, ‘We have to find a building,’” said company spokeswoman Mary Baker, Andy’s wife. “When you look back, you just say ‘Really? We did that?’”

“With the spark of a great idea, the ingenuity to develop solutions and the determination to achieve greatness, these companies demonstrate what it takes to stand out in the marketplace,” IEDC president Eric Doden said. “Because we offer a low-tax climate with a skilled workforce, companies of all sizes know that they can exercise a competitive advantage in Indiana, a state that works for business.”

All of the 33 companies recognized will be invited to an awards ceremony Aug. 22 at the Indiana Roof Ballroom in Indianapolis.

For AndyMark, which was turned down three years ago as not being quite large enough, the recognition is a bit overdue.

“We just appreciate the support of the community,” Mary Baker said. “It’s great to be able to do something you love, and to receive recognition.”

The growth in the business has surprised more than a few people.

The seed which grew AndyMark sprouted in the late 1990s, well before Science, Technology, Engineering and Math education became the buzz in education circles. Kokomo, with a host of highly trained engineers working for Delphi Electronics & Safety and for Chrysler, was an early entrant into the FIRST competitions.

AndyMark “levels the playing field” for school robotics teams, Koors said, by making the parts needed for a competitive robot affordable to the teams. In the early days of the competitions, the best teams had a huge technology advantage, but the availability of AndyMark-designed parts and systems, along with the over-the-phone help AndyMark offers customers, has helped lift all of the teams.

Kokomo Mayor Greg Goodnight said the company has become a true source of pride for the city.

“It’s probably more important than most people realize,” Goodnight said of the IEDC award. “It’s two people who have branched out and started their own business, and continued to show growth year after year. These are the kind of local startup companies we’ve envisioned having in this community.”

The Companies to Watch accolade, presented by the Indiana Economic Development Corporation, the Indiana Small Business Development Center network and the Edward Lowe Foundation, recognizes the state's privately held businesses that employ six to 150 full-time employees and have between $750,000 to $100 million in annual revenue or capital. The 33 'Companies to Watch' from 14 Indiana counties were named after evaluating 300 nominations for the awards and represent industries ranging from biotech research and robotic part design to gourmet flavor manufacturing and automotive safety. The chosen companies project to have combined revenues in excess of $422 million and create more than 345 new jobs this year. The revenue projections represent an increase of more than $218 million or 36 percent from 2012.