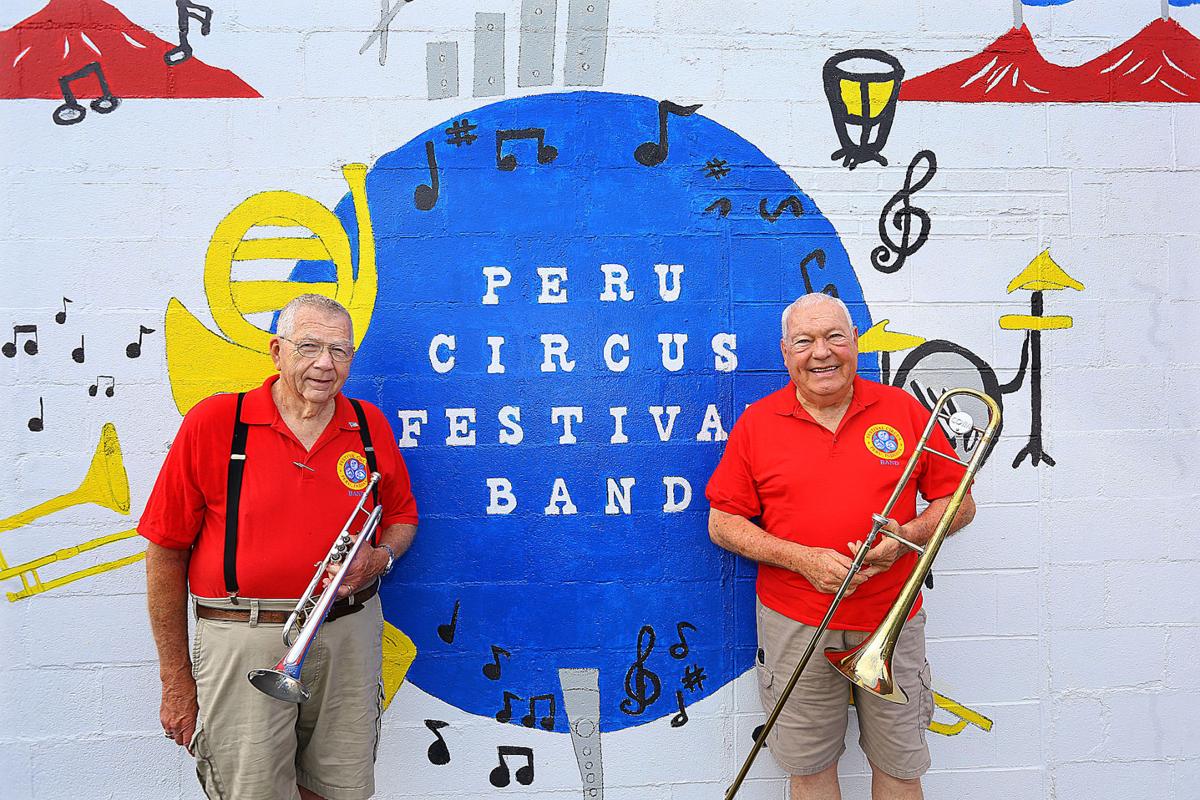 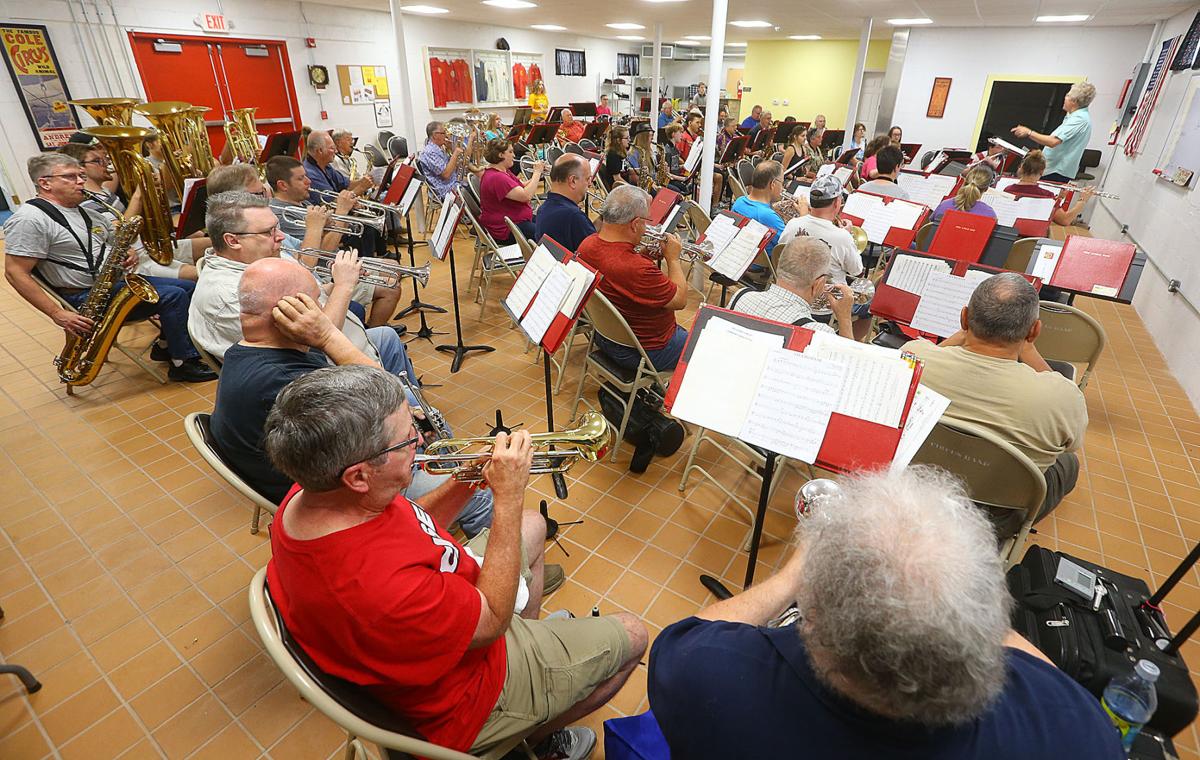 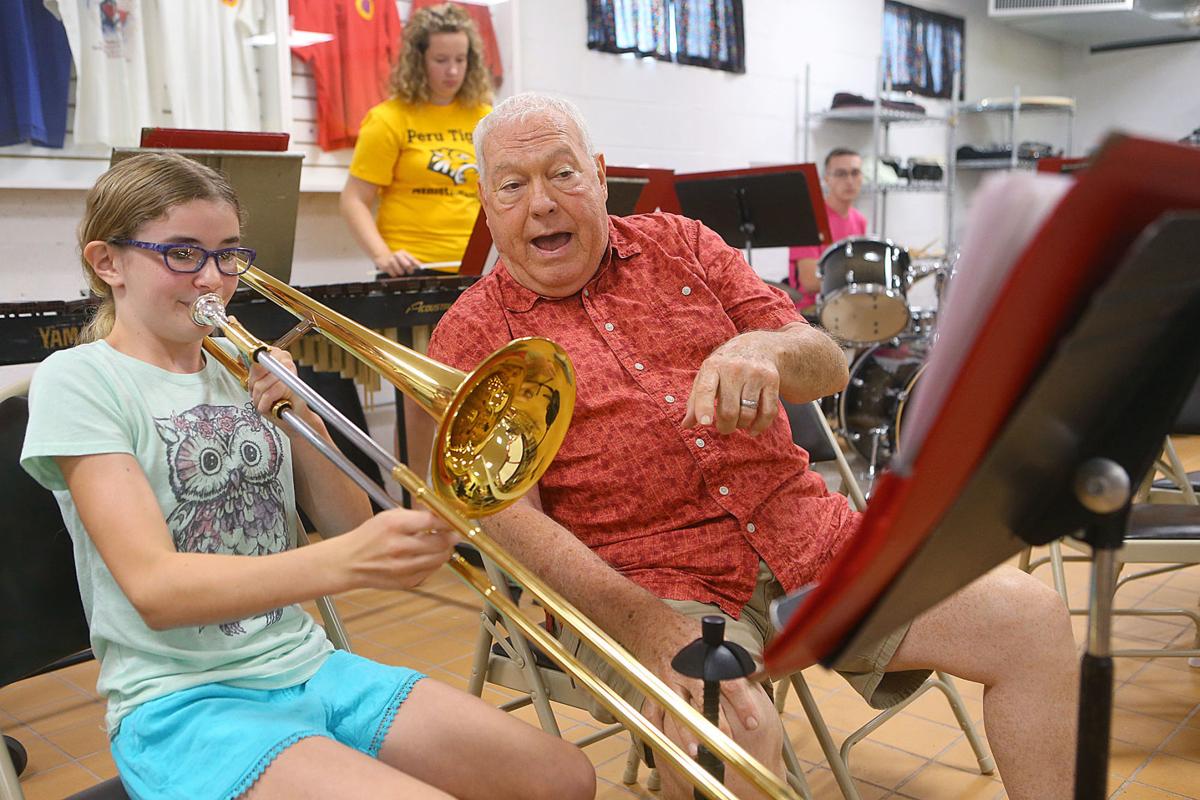 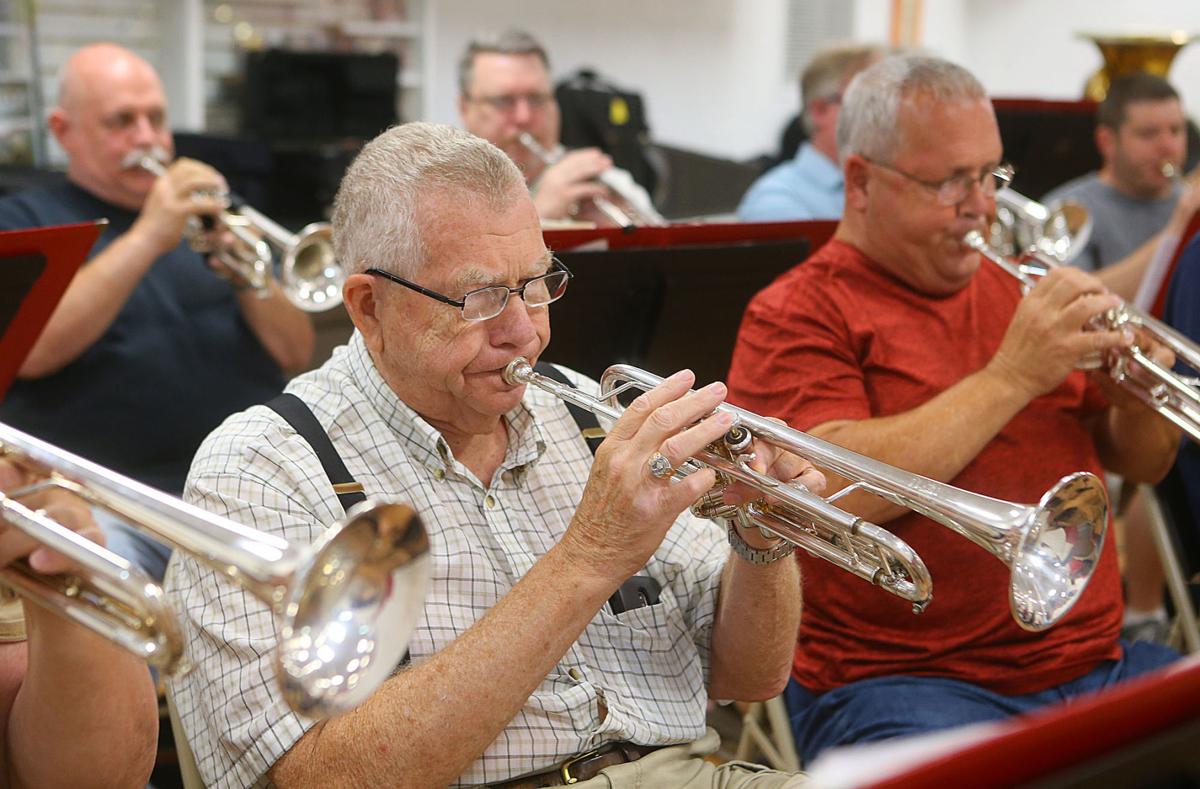 Rex Stitsworth plays the trumpet during band practice on July 3, 2019. Stitsworth and fellow band member Tom Gustin have been part of the Peru Circus band since its first year, 60 years ago. Kelly Lafferty Gerber | Kokomo Tribune 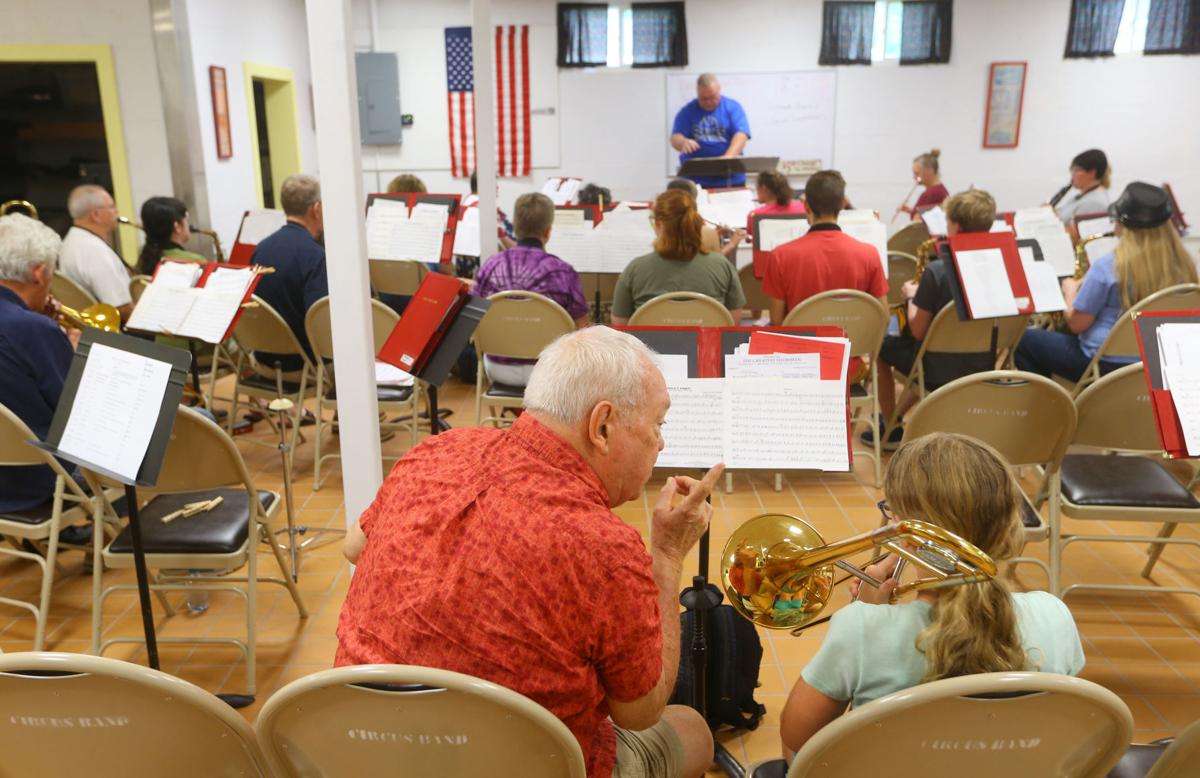 Tom Gustin, left, gives 11-year-old Macy Buck some pointers with the trombone during rehearsal on July 3, 2019. Gustin has been part of the Peru Circus band since its first year, 60 years ago. Kelly Lafferty Gerber | Kokomo Tribune

Rex Stitsworth, in the third row, sixth from the right, has been with the band since it began and was part of the group that recorded the first Peru Circus band record in the 1960s. Photo Provided 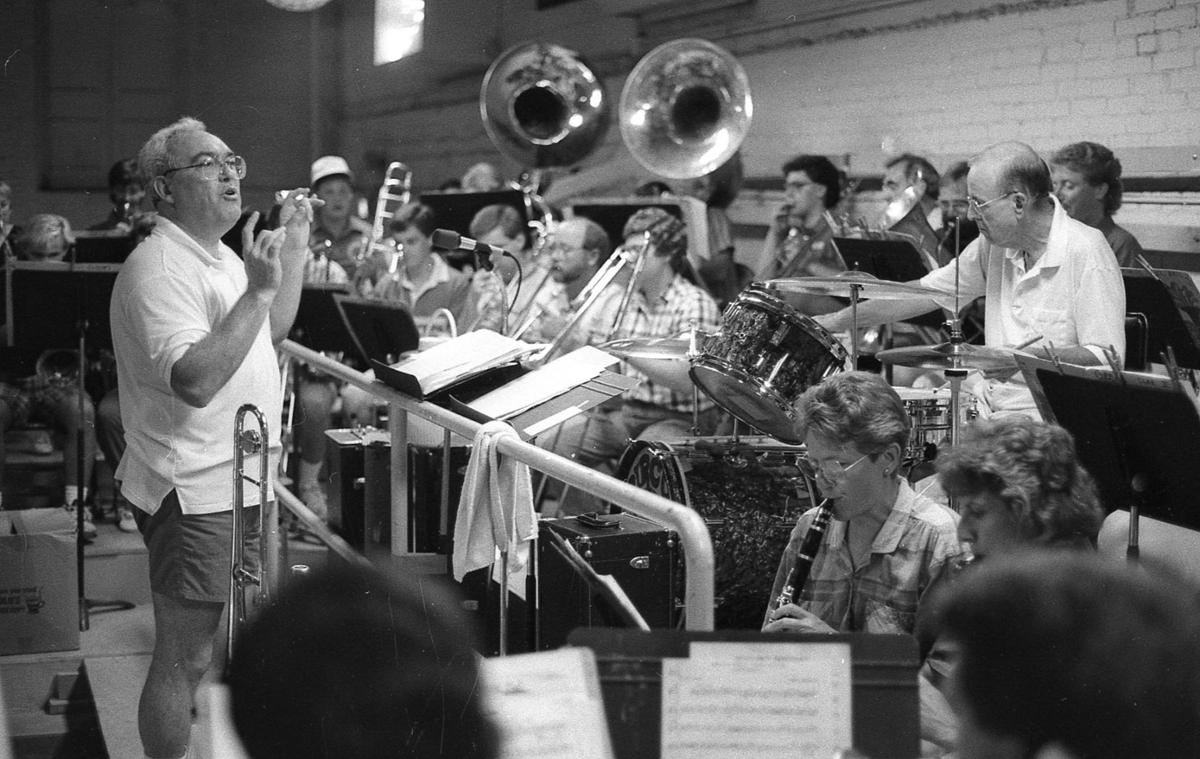 PERU – Tom Gustin and Rex Stitsworth have played in the same band for 60 years. But this isn’t just any band.

Like the time the two played right beside cages with lions and tigers prowling inside.

“Have you ever smelled cat urine?” Gustin said with a laugh. “It was tough grabbing a gasp of air to keep playing.”

Another year, the two played directly beneath a trapeze act flying overhead. Suddenly, droplets of what felt like rain came down on them. Which was odd, considering there wasn’t a cloud in the sky.

“We thought it was raining, but what happened was this kid on the trapeze slammed into one of the catchers and broke his nose,” Gustin said. “We still have the sheet music with his blood on it.”

Then there was the time the two played on top of a 40-horse-hitch wagon down the streets of Chicago to dedicate a new art installation.

And it all happened while playing in the Peru Circus Festival Band, the ensemble that provides the live music for the annual Peru Amateur Circus, which this week celebrates its 60th season as the only circus of its kind in the country.

Gustin and Stitsworth have been playing in that band since its very first performance during the city’s very first circus show. Today, they’re the only two people alive who have been with the Peru circus since the beginning.

In that time, they’ve seen the ensemble slowly morph from a ragtag group of mostly teenage musicians into a professional-grade band with more than 120 members that draws top-notch players from around the country.

Three years ago, the group became an official nonprofit organization, and now performs at festivals and venues around the area as a standalone band.

Today, Stitsworth is 73 and Gustin is 76. But when they joined up that first year as teenagers, they had no idea they’d become an integral part of what would become one of the last true circus bands in the country.

BORN UNDER THE BIG TOP

In 1958, the local newspaper decided to create a promotional event to drum up advertising, so it partnered with the Peru Chamber of Commerce.

Their idea? To host a one-time circus parade and build a zip line running from a downtown building to the Miami County Courthouse called the “Slide for Life.”

“That’s how it got started,” Stitsworth said. “It was nothing more, really, than an advertising promotion for the newspaper in the town back in those days. All the rest happened from that.”

The event was a huge success, so the city decided to make it even bigger the next year. They brought in a giant canvas tent and decided to host a full-on circus.

It was a move that made perfect sense. After all, the city was the self-proclaimed “Circus Capital of the World,” and had served as the winter quarters for some of the most popular circuses of all time, such as Ringling Bros. and Barnum & Bailey.

At the time, Peru was home to a group of renowned circus performers who moved to the city after retiring from the Big Top. The idea for the city’s new circus festival was to have those performers come together to put on a small show beneath the old canvas tent.

Gustin was there the first time that tent went up, and it was a sight to behold, he said.

“We had it all laid out, and I was looking at this big pile of canvas and rope and stuff and thinking, ‘This is ridiculous,’” Gustin said. “They had these poles set up, and these old guys said, ‘Everyone pull the ropes on the count of 10.’”

“When he got to 10 and everyone started pulling, a chill went up my back,” he said. “The tent slowly popped up, and I thought, ‘This is fabulous.’”

The tent was ready. The circus was ready. All it needed now was a band.

The city recruited then Peru High School band director Jim Noble to put together a small ensemble. He, in turn, recruited his students to play for the fledgling circus, along with a few adults.

At the time, Gustin was 17 and a senior at Peru High School, but he’d been playing trombone in different ensembles and bands since he was 12. Stitsworth was just 14 and entering his freshman year at the school. He played trumpet.

When the first circus show rolled around, the band only had around 15 players, but it was enough. And it was a success.

All the shows sold out, so they decided to add three more and asked Noble to conduct the band for the extra performances. He declined. So they asked 17-year-old Gustin if he’d do it. He agreed.

And he didn’t stop directing for 55 years.

“It was something that just really rang a bell for me,” Gustin said. “ … It was easy for me, as someone who had played with most of the guys in the band, to step up and direct them. But I was nervous, for sure. Not because of the participants, but just the situation at hand.”

Gustin ended up taking charge of the ensemble the next year, when leaders in the community asked the old-time circus performers to start training the kids in the area to do acts such as the flying trapeze and tumbling.

In 1960, the Peru Circus Festival was officially born and incorporated as an annual event.

Even so, recruiting band members every year for the shows wasn’t an easy undertaking. Stitsworth said for the first few years, it was like pulling teeth to get the city’s musicians to play in the circus band.

“We had to call to make sure people would be there, otherwise they were just thinking, ‘Yeah, I’ve had enough,’” he said. “Then you’d have to beg them and they’d finally come.”

But as the caliber of the circus performances increased every year, so did the quality of the band. Eventually, it wasn’t hard at all to find a few dozen players to show up for band practices, Gustin said.

“Once we got the old-timer circus performers and started training people, it made it an exciting thing for us musicians,” he said. “Musicians from the area that were pros started coming. It really boosted the level of musicianship of the band.”

By the 10th season, the Peru Circus Festival Band had become an established and celebrated part of the annual amateur circus. By 1970, the whole festival had moved underneath the permanent Big Top at 154 N. Broadway, where shows are still held today.

As the band gained in popularity, it started gaining some unique gigs outside of the circus festival. In the 1960s, the group was featured on the TV show “50/50 Club.”

In 1973, officials from the Schlitz Brewing Company visited the circus and fell in the love with the band. They ended up performing on top of a company-owned 40-hitch wagon in the 500 Festival Parade in Indianapolis.

A BAND OF BROTHERS

Today, the band has become a top-notch ensemble that draws players from all over the area – and all over the country. Gustin said they’ve had musicians come from as far away as New York, Louisiana and Wisconsin just to play with the one-of-a-kind ensemble.

In fact, one player who lives in Washington, D.C., has flown in every year for more than four decades just to play in the band during the circus festival.

This season, 126 musicians are playing in the group. The band has become so big that it requires four directors. Players have to take turns performing at the circus shows because the band section in the building only holds 65 people.

And the players this year run the gamut. In just the trombone section, there’s an 11-year-old girl playing for the first time sitting near an 81-year-old man who’s been with the band for decades. Another trombone player is a mortician and assistant coroner in Hamilton County. One musician is a retired surgeon.

Gustin said the group may be diverse, but over the last six decades, the band has become his family. And like family, the ensemble has always been there for him.

Like the time he was given the Jefferson Award, a recognition from a national foundation which honors ordinary people who do extraordinary things without expectation of a reward.

Gustin flew out to Washington, D.C., for the national ceremony in 1997. When he got there, a representative told him he had a phone call. He walked into a room to answer it, and there sat the entire circus band. They had all ridden overnight in a bus to surprise their friend.

“That’s why I call them my family,” Gustin said. “Talk about support. No one would do that except family … If someone in the band is in trouble or needs help, everyone gets together and tries to help them. It’s super.”

Stitsworth agreed. He said after 60 years in the group, coming to band practices and performing at shows feels a little like coming home.

“I really look forward to it,” he said. “It’s a wonderful thing that I can hardly explain. I’m not a professional musician, but I like it – and I love the people. The circus is great. There’s nothing else like it in the world.”

But for Gustin, this year is bittersweet. It’s the first time he won’t play in the band after 55 years serving as its director and playing in every festival for 60 years. He recently had surgery on the arteries on his neck, and has been ordered by doctors not to play his trombone until he heals.

But he isn’t sitting out. He said he’s helping tutor the 11-year-old trombone this year, and plans to join her next season in the band.

And he’s looking forward to watching for the first time from the grandstands underneath the Big Top as his granddaughter performs in the circus this year.

“I’m excited as a participant – and as an observer this year, since I can’t play – listening to the band,” Gustin said. “The musicianship level is so far beyond what it was in the beginning 60 years ago.”

Tickets can be purchased at the door or online at perucircus.com.

The show includes around 200 young people, ages 7 to 21, who put on 10 circus performances during the eight-day festival, which includes rides and food vendors.

The annual circus heritage parade is the last parade of its kind in the U.S. Authentic circus wagons, clowns, calliopes, wild animals, floats, and bands make their way down the center streets of the town. This parade is the longest running circus parade in the country and the second largest parade in Indiana.

PERU – When Jacob Minns was 12 years old, his piano teacher took him to the Peru Circus City Festival for a special excursion to try his hand …