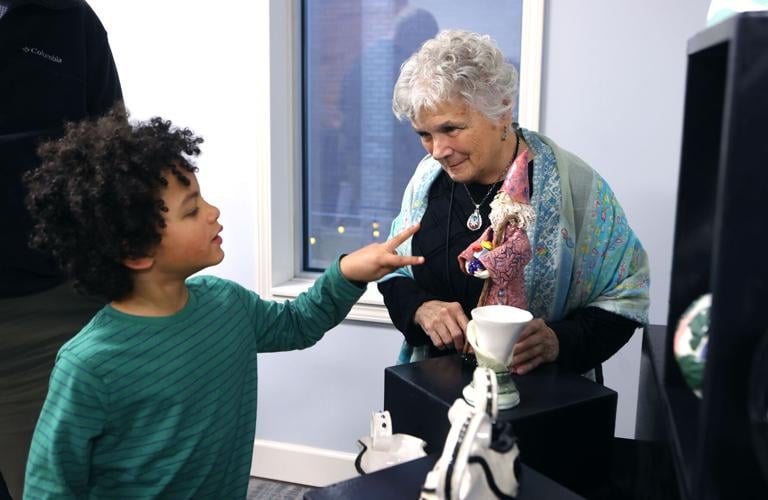 Clay artist Marilyn Aleman, right, talks to 5-year-old Alatigon Mahaja about her art during the Glazed Gala at the Kokomo Art Association on Saturday. 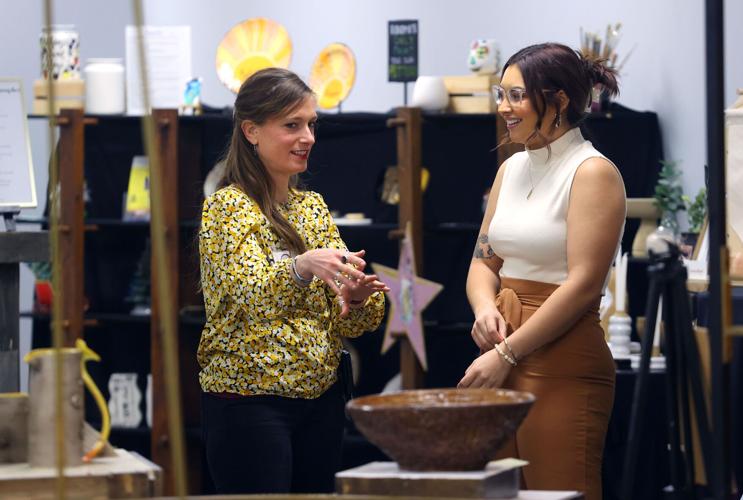 Jennifer Meeker, left, and Bailey Wiedenhoeft, two of the artists featured at the Glazed Gala, talk at the Kokomo Art Association on Saturday. 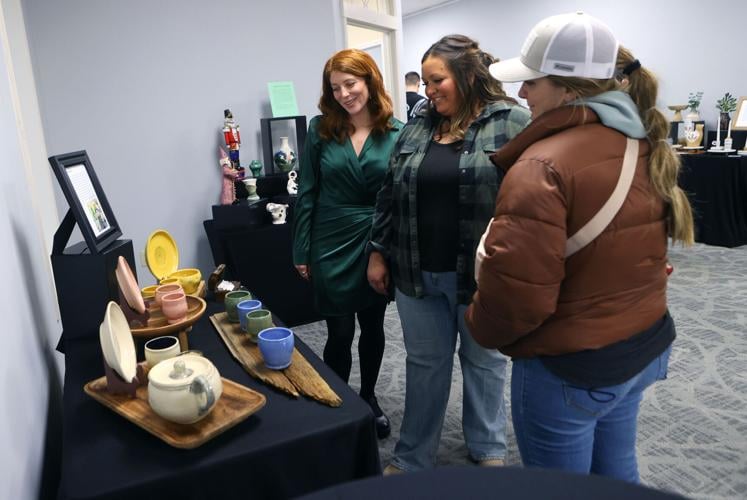 Caitlyn O’Neal, left, talks with Alisha Davenport and Allyson Perry about her art during the Glazed Gala at the Kokomo Art Association on Saturday.

Clay artist Marilyn Aleman, right, talks to 5-year-old Alatigon Mahaja about her art during the Glazed Gala at the Kokomo Art Association on Saturday.

Jennifer Meeker, left, and Bailey Wiedenhoeft, two of the artists featured at the Glazed Gala, talk at the Kokomo Art Association on Saturday.

Caitlyn O’Neal, left, talks with Alisha Davenport and Allyson Perry about her art during the Glazed Gala at the Kokomo Art Association on Saturday.

Local artist Bailey Wiedenhoeft still remembers the feeling of inspiration she’d get as a child when she looked through her grandmother’s watercolor paintings.

‘I kind of wanted to do that,” she said. “So when I got into school, I got into painting and drawing.”

But it wasn’t until a few years later, when Wiedenhoeft had an opportunity to sort of manage the downtown Fired Arts Studio and work alongside its owner Misha Jefferson, that Wiedenhoeft’s eyes were opened to a whole new medium of ceramics.

“I just got obsessed with it,” Wiedenhoeft, creator of Boundless by Bailey, said. “I love how it’s functional and that you can use it, and I also love home décor, so it’s kind of my style to do. … It’s challenging, taking a ball of clay and learning a bunch of different things. … Being able to throw something together on the wheel like that is a skill.”

And it’s a skill that is also on display right now on the second floor of the Kokomo Art Association’s Artworks Gallery, 210 N. Main St.

The exhibit — called Glazed Gala: A Pottery Exhibition — is a first of its kind for the gallery and features the works of Wiedenhoeft, Kokomo’s Marilyn Aleman of Marilyn’s Clay Garden, Michigan artist and former Russiaville resident Caitlyn O’Neal of CSO Art and Indianapolis’ Jennifer Meeker of Jennifer Meeker Art Ceramics.

The gallery runs through Jan. 28.

Over the weekend, the public had a chance to personally meet the artists behind the clay — as well as Goshen resident Sunday Mahaja of Mahaja Arts, who is January’s featured artist on the gallery’s first floor — during a reception that also featured music and wine sampling from Whyte Horse Winery and Bistro.

“We’re just hoping to let people know that art is still well alive in Kokomo,” Jefferson told the Tribune Saturday night. “… I think it’s extremely important, especially in this day and age when we’re so involved in our technology, that we really need to open our eyes and look at the color. Look at the beauty around us. Be able to connect with something other than the technology in front of us and understand how that is a way to express emotion.”

“When I was in high school, they told me that I couldn’t make a living with art,” she said. “So they sent me in another direction. Later, I started in art education. I was in Chicago for over 30 years. I did art shows there. When we finally moved down here, I started teaching and learned that art teachers here do ceramics. So I decided to pick up some classes in pottery.”

And she’s been at it ever since.

“It’s mostly just looking at the things around me,” Aleman said, when asked where she draws her inspiration. “It’s nature. A lot of times a new idea will even come when I’m waking up. … The key is learning to see. We walk through life just looking.

“If you walk through life without really seeing the sunset, you’ve missed something,” Aleman added. “You have to learn to see what you’re looking at because your brain thinks it knows everything already, and it doesn’t. It has to let your eyes bring things into your soul.”

That’s a philosophy about the beauty of art that O’Neal said she shares too.

Growing up, O’Neal knew she wanted to be involved in art, but it wasn’t until she took some ceramics classes at Goshen College that she fell in love with the art form.

“I think it’s hard not to get deep about things as an artist,” she said. “People look at a blank wall, and I say there’s so much there. Others say, ‘No, it’s just a blank wall.’ … But I think art is the most human thing we can do. It makes life meaningful. It’s something that can’t be measured. You see art, but what you’re not seeing is how it makes someone feel.”

Like the other artists interviewed, O’Neal said she is very grateful to have a chance to be a part of the gallery’s pottery exhibit, adding that she feels like it’s a full circle moment for her.

“The Kokomo Art Association, I know it’s been around a while,” she said. “… And I feel very thankful to be a part of something that’s bigger than all of us.”

“It’s freaking awesome, man,” she said laughing when asked what it meant to have her work displayed. “It’s great. I don’t know much about the Kokomo community, but it seems that what they’re doing here is very coming of age. They’re really trying to get the community involved with the arts. The vibe and energy here is strong.”

The Artworks Gallery is open for visitors from noon to 4 p.m. Monday through Saturday. The Glazed Gala: A Pottery Exhibition, as well as the works of artist Sunday Mahaja, runs through Jan. 28. The artwork is also available to purchase.

For more information about the Kokomo Art Association, visit its website at https://www.kaaonline.org/.