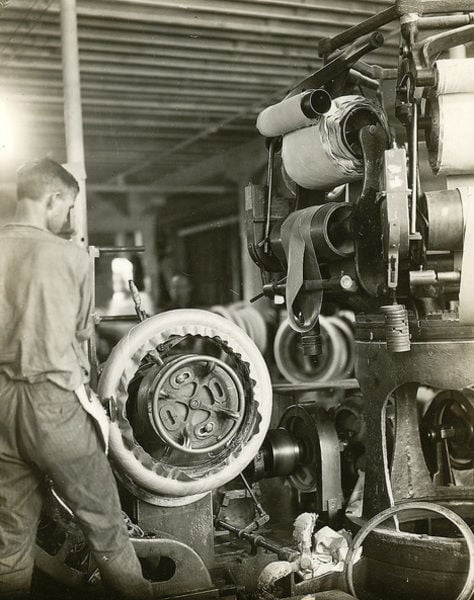 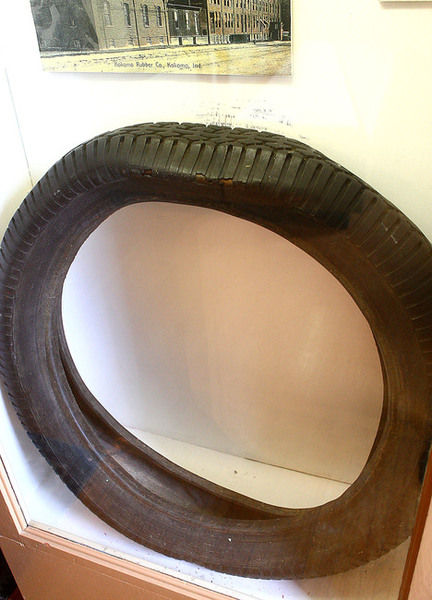 In the years leading up to the automotive boom, bicycles, like wagons, had wooden wheels, often with steel rims.

Scottish veterinarian John Boyd Dunlop changed that when he invented the first pneumatic, or inflatable, rubber tire in 1888.

Kokomo, however, claims one of its own, D.C. Spraker, president of the Kokomo Rubber Tire Company, invented the pneumatic rubber tire in 1894.

Spraker’s tire was made of strips of three-ply rubber, canvas and other wrappings of vulcanized rubber, which were wound around a slender pole.

According to Kokomo historian Dave Griffey, in December of 1895, Cornelius (Con) Carey and five other investors from Chicago came to Kokomo to talk to Spraker about investing in a rubber company that would produce tires.

An agreement was made, and in 1896, the Kokomo Rubber Company was formed. The company began making pneumatic tires for buggies and bicycles in a building at 336 S. Main St. close to what would later become the Apperson Brothers Automobile factory (later Northern Indiana Supply Company).

Spraker became associated with Spraker Brothers, a company that made red bricks and tile, in 1888. He was one of the organizers of the Kokomo Canning Works the same year. He also served as the chairman of the Howard County Republican Party and as the county chairman of the committee to elect Grover Cleveland president. He served on the board of directors of the Howard National Bank and was one of five men selected by Howard County to receive community loving cups in recognition of helpful services to the city and county. He purchased a three-story building in the 100 block of East Mulberry Street, which became the Spraker building and maintained an office there.

About 40 years prior that, in 1845, a fellow Scottsman Robert William Thomson patented a similar idea for a vulcanized rubber tire after Charles Goodyear patented the vulcanization process. At that time, the process was too expensive to manufacture and was not in high demand. Dunlop, however, was able to market his product more effectively.

In 1890, Dunlop secured a U.S. patent for the rubber tire, which became standard for bicycles. Shortly after, with the emergence of the automobile, Dunlop Tire began producing a thicker tire for cars.

The website About.com Inventors also lists Dunlop as the first inventor of the pneumatic tire. The website lists a timeline of the invention of the tire, but does not mention D.C. Spraker’s name.

• Charles Goodyear invented vulcanized rubber in 1844 that later was used for tires.

• In 1888, John Dunlop invented the air-filled, or pneumatic, tires, however, his were for bicycles.

• In 1895, André Michelin was the first person to use pneumatic tires on an automobile. It was, however, not a success.

• In 1903, P.W. Litchfield of the Goodyear Tire Company patented the first tubeless tire; however, it was never commercially exploited until the 1954 Packard.

• In 1904, mountable rims were introduced that allowed drivers to fix their own flats.

• Goodrich also invented the first synthetic rubber tires in 1937, made of a patented substance called Chemigum.