The city of Kokomo has settled with a Kokomo artist after she suffered a serious fall on the Walk of Excellence last winter.

Patti Host, who does specialty art and interior design across Kokomo and is in part known for her miniature replicas of city landmarks, told the Tribune Thursday that the city has agreed to pay $5,000 to the law firm Golitko & Daly – $3,000 of which will go to Host to cover medical expenses.

Court documents filed this week in Howard Superior Court I show that both sides “stipulate and agree to the dismissal of this cause.” An order dismissing the case was signed Wednesday by Judge William Menges.

A copy of the “release and indemnifying agreement” signed by Host earlier this month notes that the settlement “is a compromise of a disputed claim” but points out that “payment is not to be construed as an admission of liability on the part of the City of Kokomo.” 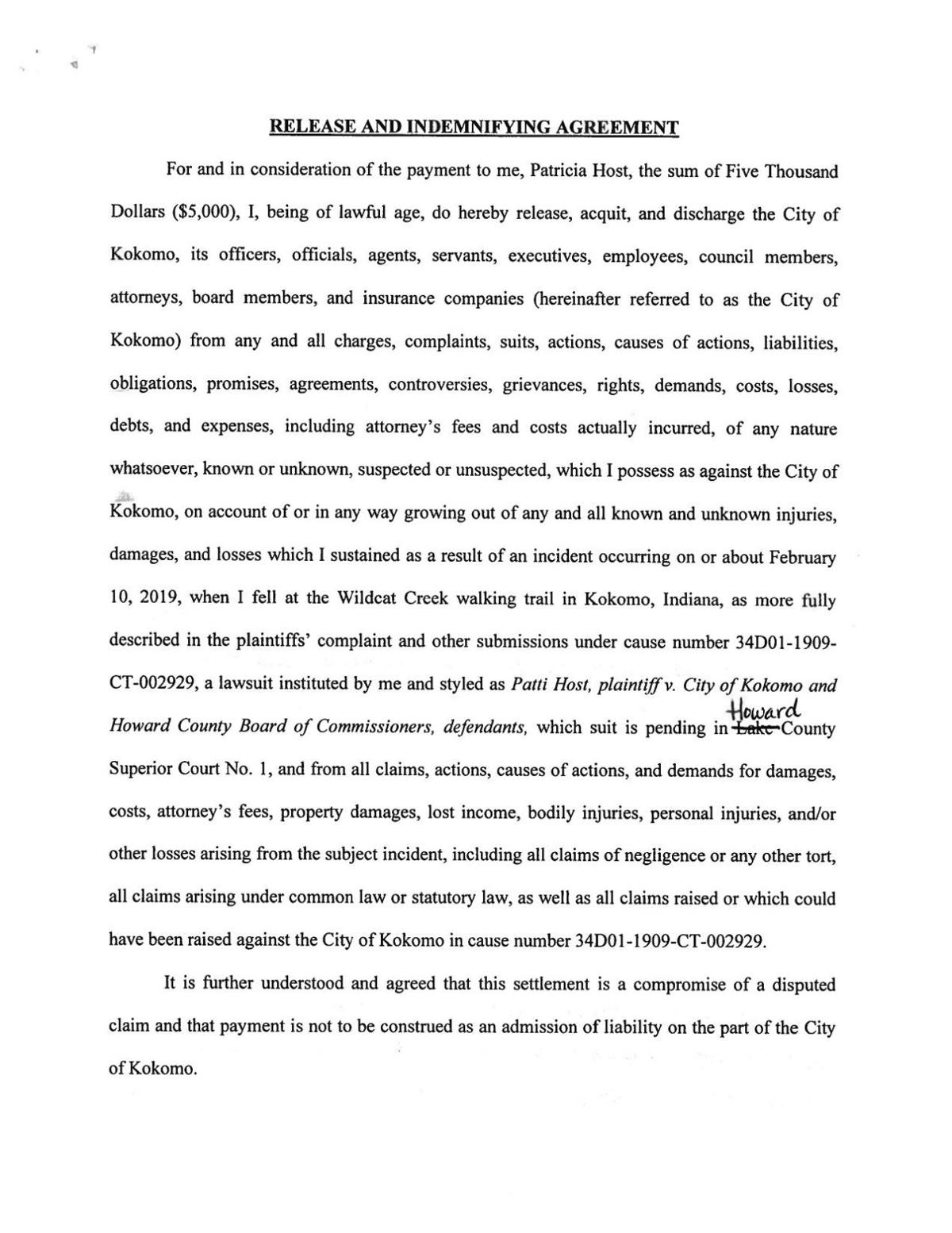 News of a lawsuit first broke in October after Host sued the city. She said public officials had previously declined to help pay medical expenses following a slip-and-fall on snow-covered ice on the Wildcat Creek Walk of Excellence in February 2019.

Host, who filed the suit in late September, claimed that negligence and a failure to maintain the trail caused an unsafe environment for trail-goers and ultimately led to a fall she says caused serious and permanent injuries, including head trauma.

Host told the Tribune Thursday that the fall happened on a water overflow that had frozen, causing her to flip into the air and hit her head “like a bowling ball on that asphalt.”

She called herself fortunate to have not passed out and went as far as to say she is “lucky to be alive, I think.”

Following the fall, she filed a tort claim and requested the city help pay her medical expenses – an ask that was ultimately denied, leading to the lawsuit.

“Let’s face it. The city, if they would’ve paid me to begin with, what I asked for, which was just the medical expenses, they would’ve saved some attorney fees on both sides,” said Host.

“You ask nicely for something to be taken care of, and they turned it down. So then you turn to the attorneys. And I’m pleased. All I wanted was the medical expenses. And so that’s what I ended up getting, but it just took a lot longer and had to go through the attorneys to get it, which obviously cost the city more.”

Kokomo Mayor Tyler Moore said in a statement Friday that he is “glad that both parties were able to come to an agreement and move forward.”

Meanwhile, Host said she received backlash following a Tribune story in mid-October about the lawsuit, amid assumptions that she was only looking to make a profit.

“Most people, once that first article came out, it was like I was getting the comment, ‘Oh, you’re suing for a million dollars,’” she said.

Instead, Host insists, all she wanted was payment for her “medical expenses, not additional. I just wanted that paid.”

The lawsuit claimed the city “failed to ensure trail-goer safety due to lack of proper maintenance and care” by not clearing the trail of everything “that could create an unsafe environment” or properly warning residents of dangers on the trail posed by the cold weather.

“People get real crazy, and they think you’re suing to get rich. And I was not. Just wanted my medical expenses paid, and that’s what I received. And I am pleased to get that taken care of,” she added.

The Walk of Excellence is described on the city’s website as a trail extending east and west through Kokomo, running through parts of downtown and stretching nearly four miles.

At some points it crosses over the Wildcat Creek; it also runs past Kokomo Beach, the city’s new bike-share building, Kokomo Municipal Stadium and through Foster Park.

Host said she fell at the end of the trail near Carter Street.

The settlement came after an attorney representing the city argued in a previous legal filing that Host’s claims were “barred by her contributory negligence” and that she “incurred the risk of her injuries.”