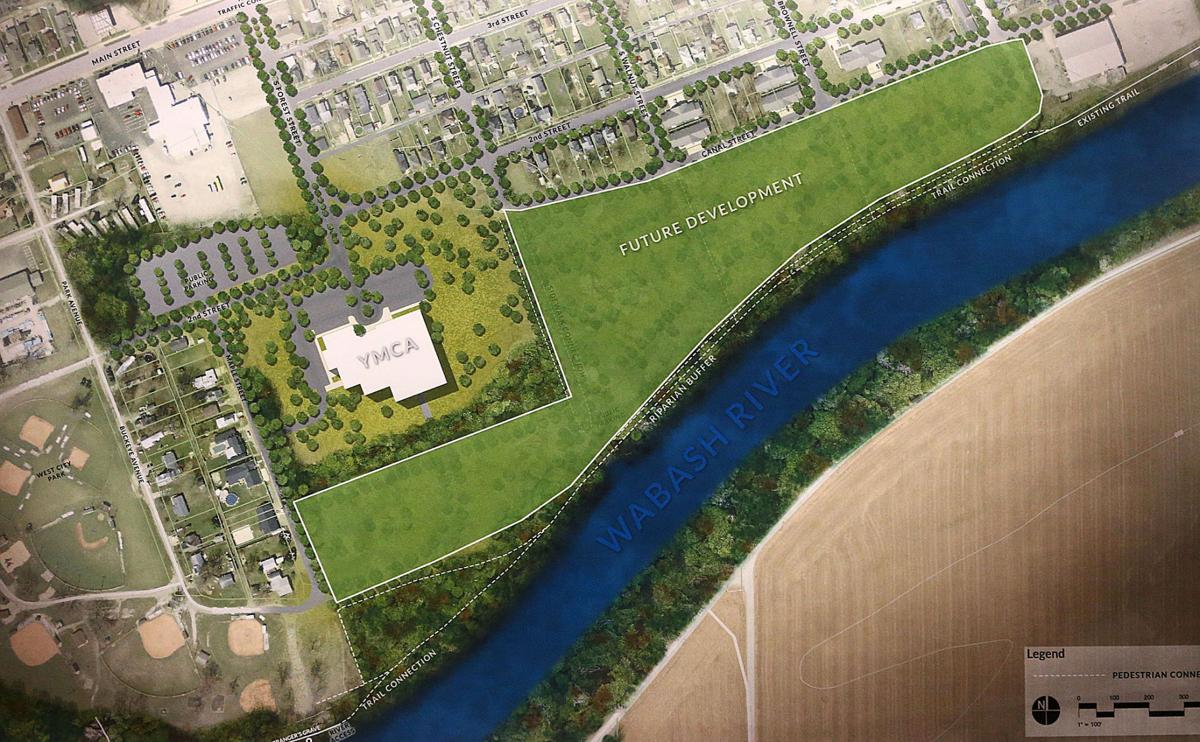 A rendering of the new Miami County YMCA. 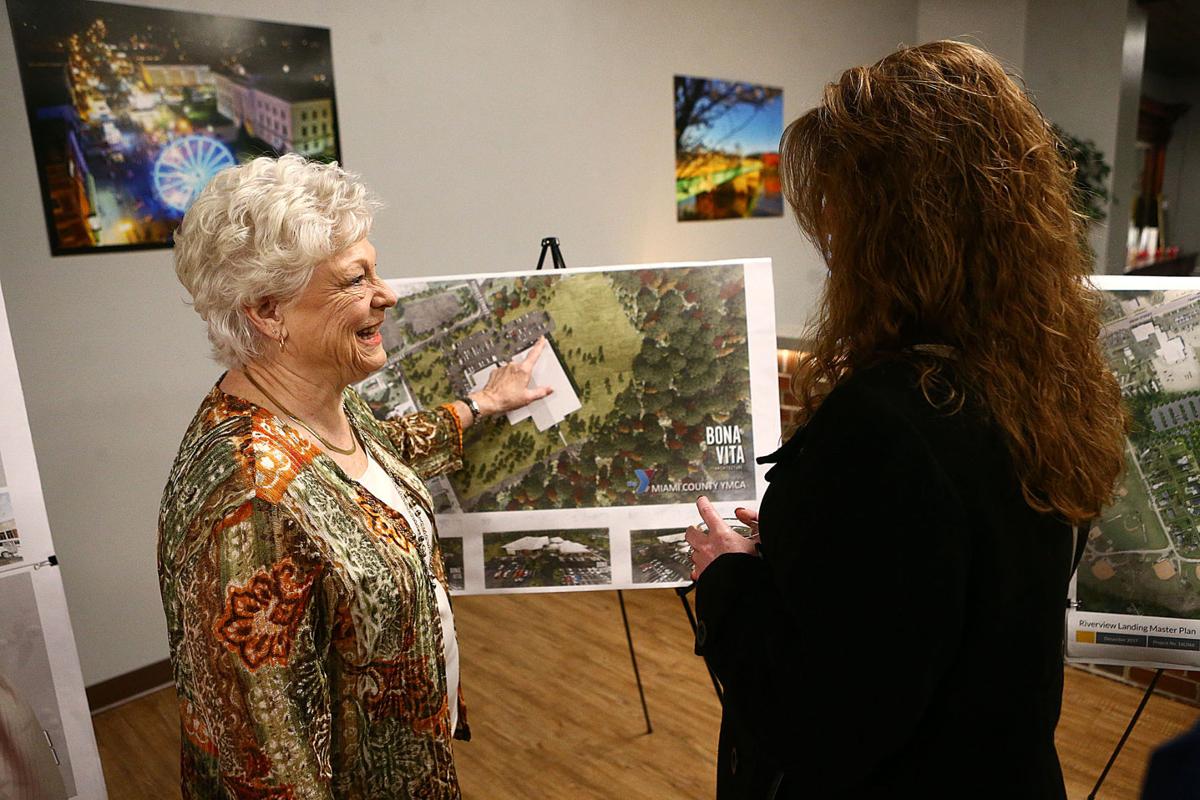 Sandi Faust, left, part of the steering committee of the Miami County YMCA, talks about the plans to Mary Brown before the announcement for Peru’s Riverview Landing Project on December 6, 2017. 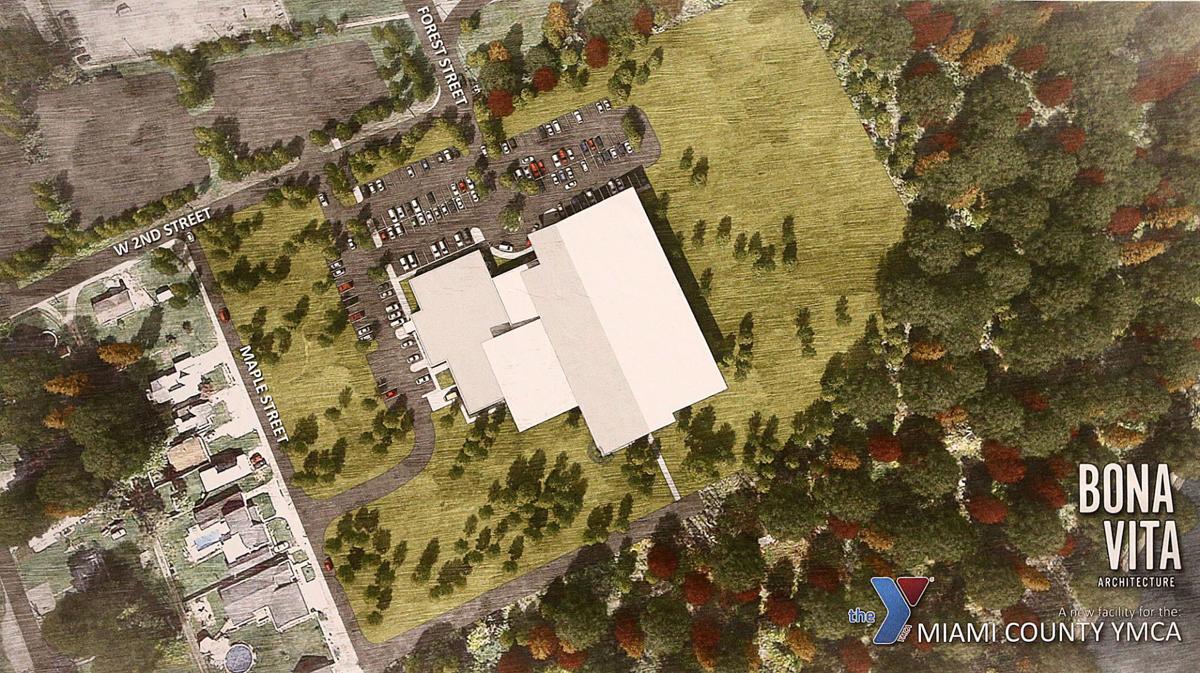 A rendering of the new Miami County YMCA.

PERU – Construction is set to begin by this fall on the new Miami County YMCA, along with an extension of the Nickel Plate Trail, after the Peru City Council last week approved $1.3 million in bonds to help pay for the projects.

The new $12.9 million YMCA will be built along the Wabash River, and will be part of a more than $13.5-million development that has been dubbed the River View Landing community improvement project.

The total project area includes 40 acres of former railroad property the city acquired in 2017 for $250,000. The land is located between West City Park and River Walkway Park along Canal Street, and was formerly owned by the railroad company CSX.

Jim Tidd, executive director of the Miami County Economic Development Authority, said $700,000 of the bond money approved by the council last week will go towards installing a special foundation system at the Y after crews discovered the soil at the site had compaction issues.

He said $400,000 of the money will pay to extend the Nickel Plate Trail from the Wabash River bridge on the city’s west side, past the new YMCA, and connect with the current Riverwalk Trail, which runs into downtown Peru.

The remaining bond money will pay for fees and legal services, and $100,000 will be placed in a debt reserve fund. MCEDA is in charge of the bond money, which will be dispersed and managed by an outside trustee, Tidd said.

The bonds will be paid for through revenue gained from the area’s Tax Incremental Financing (TIF) district, in which the Y and River View Landing project is located. In a TIF district, any extra tax revenue that comes in from an increase in property values goes back into redeveloping the district.

Mark Demchak, director of the Miami County YMCA, said with the $700,000 in place for the building’s foundation system, they are close to wrapping up fundraising on the project.

He said they currently have around $12.3 million, and the remaining money will come from a challenge grant from the Dukes Health Care Foundation. Under the terms of the award, the foundation is matching dollar-for-dollar all private pledges made to the Y’s capital project up to $2.5 million.

Demchak said there is still $309,000 in matching funds available through the grant, which would total $618,000 toward the project and bring the total amount raised to $12.9 million. He said the Y is confident the final funding will be raised this year.

“One way or the other, we’re going to break ground by this fall,” Demchak said. “We’re in the last couple miles of this marathon, and people are starting to see the finish line, so everyone is pretty excited.”

Both the City of Peru and Miami County have pledged $1.5 million each towards the project. Around $3 million has come from anonymous donors. In total, more than 300 people and businesses have contributed money towards the facility, Demchak said.

But rising construction costs have cut back on the size of the new Y.

The facility was originally estimated to cost $12.4 million, which was projected to build a 69,000-square-foot building with an elevated walking track, a multi-use pool, a chapel, a large wellness center, a gymnasium for court sports and an auxiliary gym for gymnastics.

Now, the $12.9 million is set to build a 65,000-square-foot building, but 10,000 square feet will be used by a medical provider the Y is partnering with to offer services such as athletic training, physical therapy, orthopedics and some family practice. Demchak said he could not yet reveal the name of the medical provider.

The smaller building means the new Y will not have an auxiliary gym, and the locker room space will be significantly reduced, he said.

The facility is now projected to be open to the public by the fall of 2021 to replace the more than 60-year-old downtown building. And when the new Y does open, it’s going to be a huge boost to the city, Demchak said.

“The economic impact is going to be huge, and the quality-of-life improvements that the YMCA and Nickel Plate Trail extension will bring to Peru will be significant,” he said. “It’s going to be a huge shot in the arm for everyone.”

MCEDA director Tidd said construction of the Nickel Plate Trail extension is also set to begin this fall, and should be completed no later than the spring of 2021.

The trail extension was originally going to be paid for through a $200,000 grant from the Indiana Department of Natural Resources, which was also earmarked to pay for a second extension of the trail on the city’s north side from Lover’s Lane across U.S. 24 to Ninth Street.

Now, that grant will only pay for the Lover’s Lane extension, and the $400,000 in bond money will pay for the Riverwalk extension along the Wabash River, Tidd said.

Once the new YMCA and trail extension are complete next year, he said, at least two developers have already expressed a “sincere interest” in building some kind of new housing development as part of the 40-acre River View Landing project.

“We’re excited about seeing how they would develop this extra land,” Tidd said. “There’s a need for housing here, and something we haven’t taken advantage of over the years is the Wabash River. It’s an asset to the community, and we now have the vision of the Y and the new walkway and new housing all facing the river.”

PERU – After three years of fundraising, the Miami County YMCA Thursday launched its final push to raise more than $13 million to build a new …