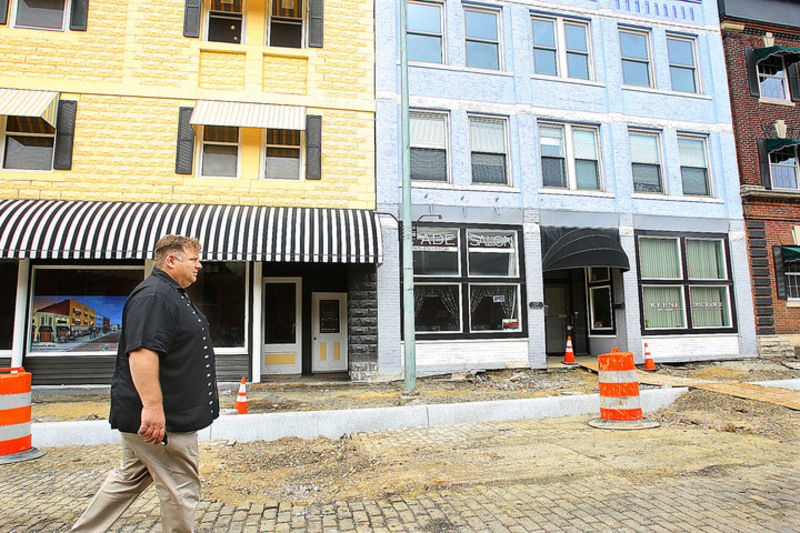 MAN AT WORK: Developer Jeff Broughton is fixing up several of the Buckeye Street buildings between Jefferson and Jackson streets, across from the old train depot the city of Kokpmo now owns. Tim Bath | Kokomo Tribune

POSSIBILITIES: This is the upstairs of the old train depot on North Buckeye Street, looking south towards Jackson Street. The city of Kokomo now owns the building. Scott Smith | Kokomo Tribune 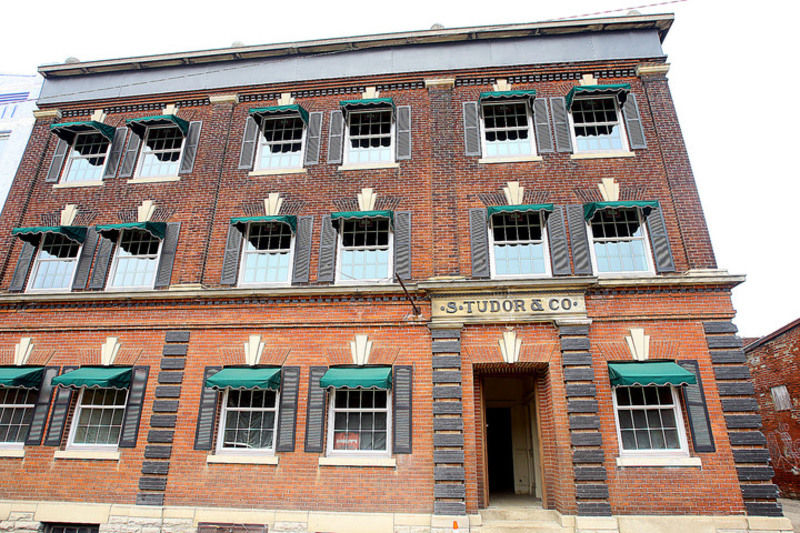 NEW LOOK: New windows and awnings spruce up the look of the old Tudor Building, 513 N. Buckeye St. Developer Jeff Broughton is in the process of gutting and renovating the interior, and replacing the building's roof. Tim Bath | Kokomo Tribune

MAN AT WORK: Developer Jeff Broughton is fixing up several of the Buckeye Street buildings between Jefferson and Jackson streets, across from the old train depot the city of Kokpmo now owns. Tim Bath | Kokomo Tribune

POSSIBILITIES: This is the upstairs of the old train depot on North Buckeye Street, looking south towards Jackson Street. The city of Kokomo now owns the building. Scott Smith | Kokomo Tribune

NEW LOOK: New windows and awnings spruce up the look of the old Tudor Building, 513 N. Buckeye St. Developer Jeff Broughton is in the process of gutting and renovating the interior, and replacing the building's roof. Tim Bath | Kokomo Tribune

Over the winter, when developer Jeff Broughton was just getting started with renovations in the 500 block of North Buckeye Street, the train depot still belonged to the railroad.

Thursday, railroad employees were using a pickup truck crane to lift old rails out of the building, clearing it out for the new owner, the city of Kokomo.

On the west side of the depot, the building at Jefferson and Washington was still a vacant former beauty supply store, the apartments at Washington and Taylor were still under construction, and there weren’t any tenants lined up for the spaces Broughton was renovating.

This week, an army of Broughton’s contractors was working to stucco the outside of 219 W. Jefferson, with the idea of luring a Mexican place to open up. Outside the building, massive old beams, salvaged from somewhere by Scott Pitcher, were ready to form the structure of a pergola Broughton wants to build, which will sit over a broad, paver-lined patio area.

That’s the latest progress visible to passersby, but the biggest news this week is that a Kokomo success story, The Gingerbread House Bakery, owned by Kokomo husband and wife team Matt and Lauren Gaines, is in the final stages of talks to sign a lease at 505 N. Buckeye, next door to Fade hair salon.

“It’s just a lot better opportunity than what we have,” Lauren Gaines said. “We can expand our products to be able to offer twice as much, have more bakery items, and have a nice place where people can come in, sit down and enjoy a dessert.”

Matt Gaines said they’ve been scouting locations for a while because expanding their current location, at Jefferson and Philips streets, was going to be too expensive. On Buckeye, they’ll have a basement to use as a much larger kitchen, and they’ll have a seating area for the first time in a while. They’re doing so well at their Jefferson store that they’ve had to use their former small seating area to store takeout boxes and other items.

They’re shooting for a move to the new location sometime in July, and they’ll continue to be open on Jefferson Street at least until then.

“What we want to achieve is to have more of a wholesale bakery, and not just a donut shop. And we’ll have the senior citizens building next door,” Lauren said.

Over at the Washington Street Senior Residences, neighbors Nate Comarella, Barbara McCall and Rosemary Wire were out on the patio, enjoying a particularly fine day Friday, chatting and observing the E&B Paving workers making progress on the nearby Nickel Plate Trail.

Wire, who moved back to Kokomo over the winter after spending the past 12 years in Florida, recently moved into the new apartments at Washington and Taylor streets on the urging of her daughter, who she said “wanted me to socialize.”

Now that she’s made some new friends at the residences, Wire said she’s especially pleased with the central location of the 54-unit apartments.

“Everything’s just really handy. It’s convenient, and we take the senior bus if anything is too far,” she said.

They won’t just have a bakery nearby for long, judging from the pace Broughton is moving on his projects.

There are plans to bring a country-and-western night spot to 515 N. Buckeye, the white building formerly used by a local ministry for storage. Part of that building might also become an Italian restaurant, with open-air seating in the now-vacated alley on the building’s south side.

Next to the future Gingerbread House location, Broughton is finalizing a lease with a local restaurateur who is planning to open a breakfast/lunch spot with a grill, a lunch counter, a coffee bar and a bakery case.

“It’s a community story. The administration and Mayor Goodnight have focused on revitalizing this area, and then to see folks come along and put private money into bringing back some of our historic buildings, and our historic neighborhoods, I think it’s great for everybody,” Tharp said.

“The trail will bring young families down here, and then you have the senior residences. This is a big piece of creating a more connected, more vibrant city.”

The biggest project Broughton has taken on, without a doubt, has to be the Tudor Building, 513 N. Buckeye St.

The building has been vacant for decades and the roof has been compromised for years, although the heavy floor joists they used back when it was built kept the walls from falling in.

Broughton has a lot of work to do there, starting with restoring the building’s structural integrity. Crews have torn off much of the old roof, and they’ll be starting the installation of a new roof soon, along with new joists in part of the building. Most of the flooring will need to be replaced, and Broughton said he plans to sandblast the interior and clear out everything afterward.

He’s keeping, however, the massive wheels from the three-story building’s former elevator. When all is said and done, Broughton is hoping to bring a brew pub to the location. Much work remains to be done, however.

The old train depot the city bought in March from Central Railroad of Indianapolis needs a lot of work too, but the city can now look at hiring someone now that the railroad appears to be out of the building.

The acquisition was part of a deal which gave the city enough right-of-way to extend the downtown trail from south of the depot all the way to Gano Street. The depot, which city officials say is structurally sound, cost $45,000, while the right-of-way cost another $160,000. Built around 1910, it is Kokomo’s last remaining train depot and has retained its historical integrity including original windows, loading dock doors and platform.

The building will be located adjacent to the city’s extension of the Industrial Heritage Trail, which will be under construction in the coming months on the east side of North Buckeye Street from Superior Street to Jackson Street.

Scott Smith is on Twitter, @JasonSSmith1, and can be emailed at scott.smith@kokomotribune.com

Downtown Tudor Building to be renovated into retail space, apartments

Kokomo’s historic Tudor Building – sitting in a stretch of Buckeye Street that in recent years has seen a renaissance of food, drinks and shop…