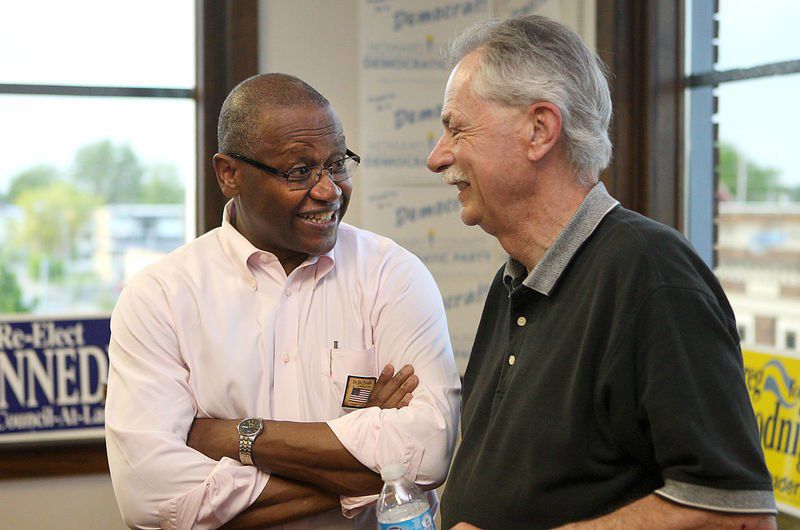 This is a copy of the challenge filed against the candidacy of Kokomo Common Council President Bob Hayes. The councilman's attorney has questioned the legal validity of the challenge, saying the claim is not stated as a fact and therefore should be dismissed.

The Howard County Election Board voted unanimously Thursday to dismiss a challenge to the candidacy of Kokomo Common Council President Bob Hayes.

The challenge, filed on Feb. 14 by a city resident, called into question Hayes’ primary residence, saying it “may not be Howard County.” But board members ruled the challenge did not meet the factual requirements needed to merit an official hearing, finding it “deficient on its face” and “invalid.”

Hayes, who has served on the council for roughly 19 years and has been president for the past five years, is seeking re-election to his at-large seat.

“You must allege the reason and facts supporting the [allegation], and that just did not exist on the challenge,” said Democratic Election Board member Derick Steele following Wednesday’s special meeting.

Also on the board are Howard County Clerk Debbie Stewart and Republican Napoleon Leal, who is in Florida and was represented by a proxy, Phil Thurston.

The challenge, initiated by resident Josh Layton, alleged that Hayes’ "primary residency may not be Howard County.” Property records attached to the challenge show Hayes and his wife as the owners of a home in Osceola.

Hayes, who works at Delphi, lists a Kokomo address as his primary residence on candidate filing documents and has described himself as a “lifelong resident of Kokomo.”

He declined to elaborate on his living arrangement on Wednesday but thanked board members “for the work on this unfortunate matter.”

“We can now get back to the business of keeping Kokomo pointed towards a successful future,” he added.

In a brief interview, Hayes said he felt “relief, a lot of emotions right now. Frustration. I felt like it was a waste of a lot of people’s time and money. But it seems to be that’s the political environment we live it now.”

Hayes called the motivation behind the challenge “political, political. Yeah, I’ll say politics. It was an effort to – maybe someone thought that I was low-hanging fruit by making the accusations that they did and [try to] get me pulled off the ballot."

Hayes, by not publicly detailing his living arrangement, is likely to receive criticism from those who believe he got off on a technicality and has something to hide.

But he’s not worried.

“People can call it a technicality, whatever they want,” he said. “I like to use the words: It didn’t have any merit.”

Had the challenge received a hearing, Hayes would likely have been required to prove that his primary residence is in Kokomo.

The Bureau of Motor Vehicles lists numerous documents that can be used to prove residency, including a computer-generated bill, bank statement, pre-printed pay stub, medical documents, a W-2 form, voter registration card and much more.

Hayes said previously that he “can show proof of residency here.”

One public document obtained by the Tribune discredits the oft-cited argument against Hayes that because the Osceola home has a homestead deduction it would have to be his primary residence.

A request sent to the St. Joseph County auditor’s office for the “most recent homestead deduction” filed at the property resulted in a tax document from 2001 that does not include Hayes’ name as someone who filed for the deduction.

Meanwhile, the legal validity of the challenge was first publicly questioned last Wednesday when Manny Herceg, an attorney representing Hayes, said it “doesn’t even meet the basic requirements of the statute.” He pointed to state code that says a challenger must “set forth the facts” of a candidate’s questioned eligibility.

Herceg has said the words “may not” amount to an opinion, not a fact. In the challenge, Layton crossed out the words “is not,” instead choosing to write that Hayes’ “primary residency may not be Howard County.”

Last Friday, Herceg filed an official motion to dismiss the candidate challenge, writing in a memorandum filed with the election board that it “should be dismissed because Mr. Layton, by his own admission, did not set forth facts known to him concerning Councilman Hayes’ eligibility to run for councilman-at-large. 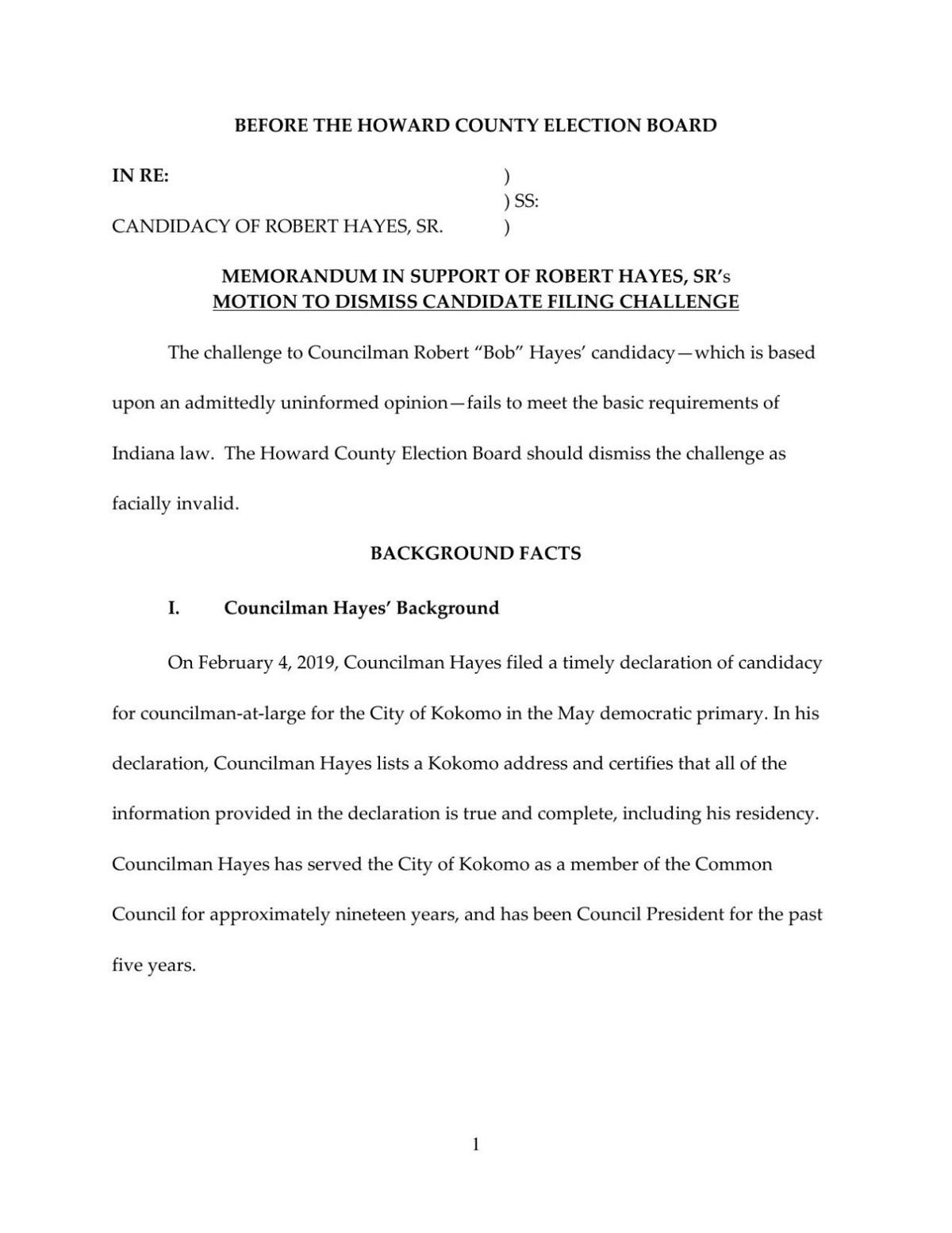 "Instead, he merely speculates that Councilman Hayes ‘may not’ be a resident of the City of Kokomo. Such speculation is insufficient as a matter of law to support the Challenge."

In previous comments to the Tribune, Howard County Attorney Wilson, who consulted election board members, furthered the argument against the challenge.

"I do see some issues with the challenge," he said. "It actually goes beyond the 'is not,' 'may not.' The statute requires that for a candidate challenge you have to set forth facts to support the challenge.

"And simply saying he may not reside in Howard County is not setting forth of any facts. ... The challenge that was filed has nothing even approaching a fact."

He added: "A fact is a fact. Not supposition, it's not a guess, it's not a may or may not. It's a fact that you can point out. ... For that reason, I think that the challenge does have some issues."

Wilson also said "it certainly is a problem" that the property records of the home in Osceola were given to the clerk but not referred to in the challenge document itself.

In conjunction, Steele said Wednesday that the challenge would have needed to prove that Hayes does not live primarily in Kokomo, not just that he co-owns a home in another county.

But it didn’t come close, he noted.

“There were no facts alleged to support that he didn’t live in Howard County,” he said. “Anything attached to the challenge that shows ownership of property in another county doesn’t show lack of residency in this county.”

The challenges against Jones and Wendt were both filed by Kokomo resident Justin Kingery, who wrote the same thing for each candidate: “The candidate has not voted in a Democratic primary and is ineligible to file on the Democratic ballot.”

State documents show that primary candidates “must belong to the Democratic or Republican Party.” Wendt or Jones could qualify as a Democrat if they pulled a Democratic ballot in the last Indiana primary in which they voted.

Stewart has confirmed to the Tribune that neither Jones nor Wendt have ever voted in a primary election in Howard County.

The candidates could have also qualified to run if they had filed a certification from Howard County Democratic Party Chairwoman Kathy Skiles “affirming their membership” in the party. Party officials have confirmed that did not happen.

Election Board to rule on 'validity' of Hayes challenge

The Democratic primary ballot for this year's municipal election got two names shorter on Monday.