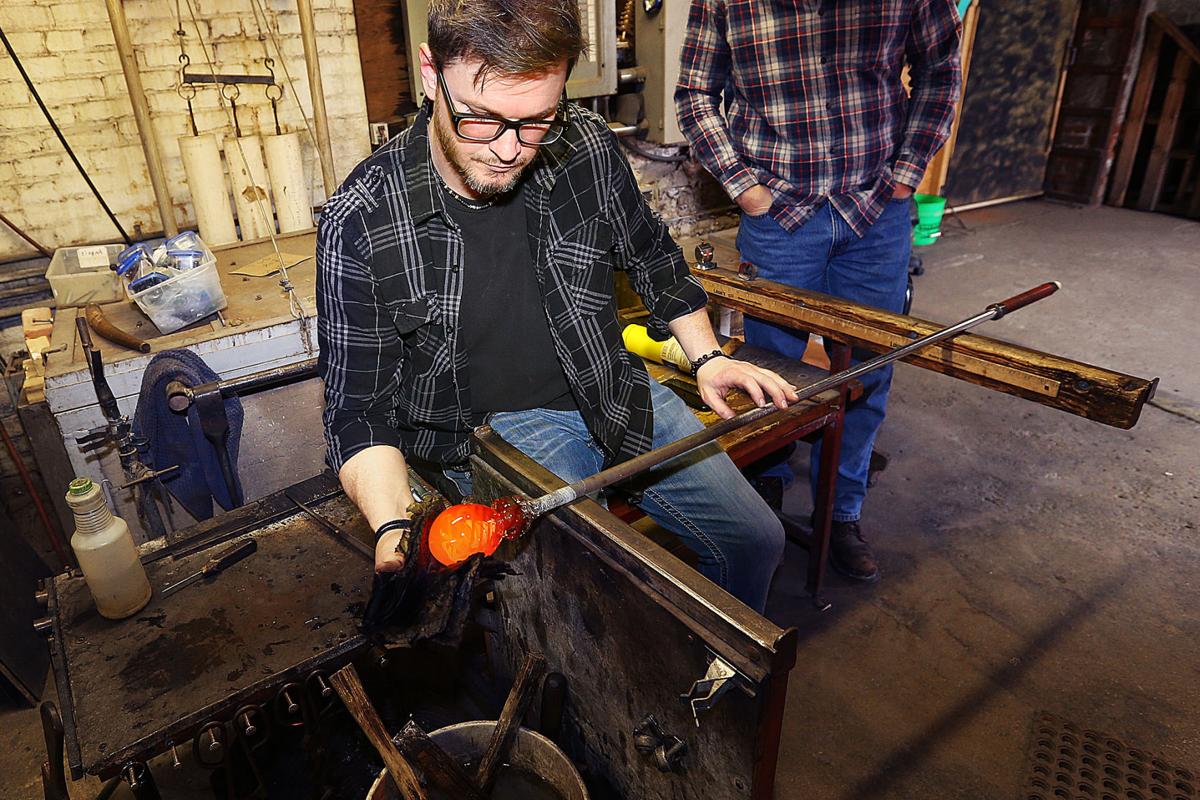 Jeff Simmons creates a paper weight with cremation ashes in it. 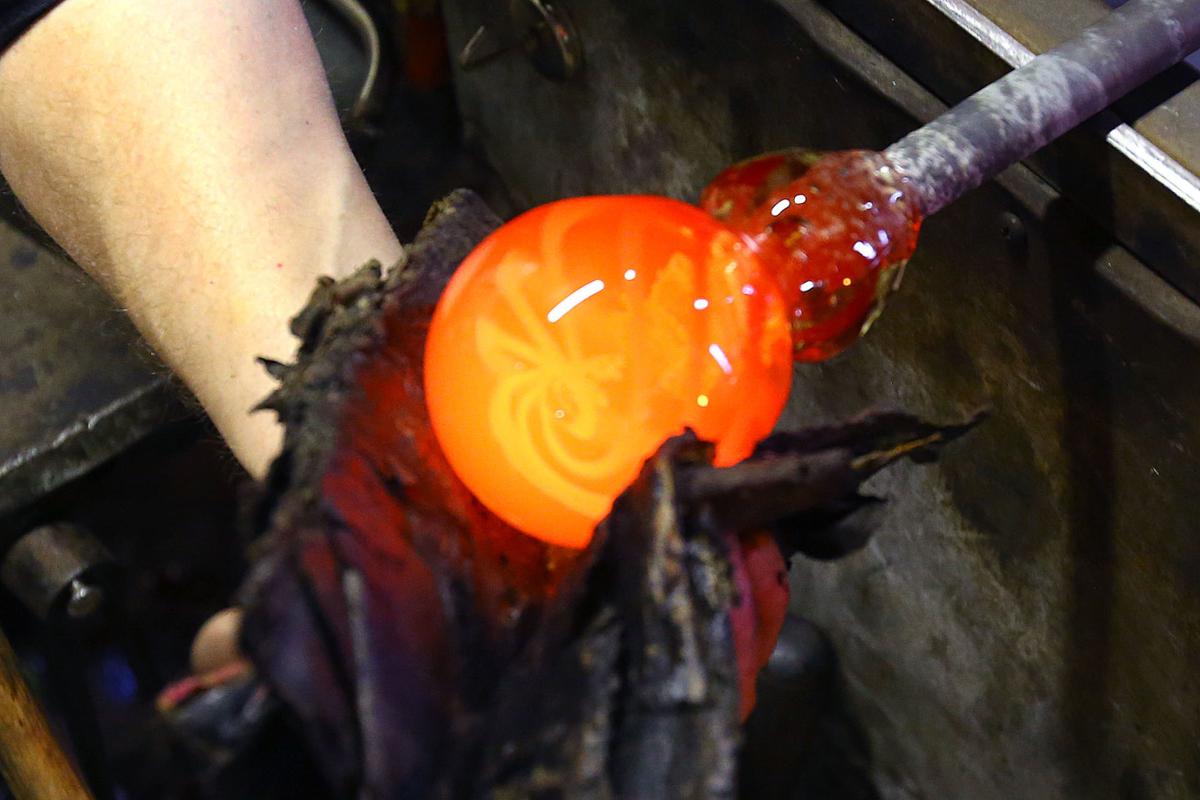 This paper weight being made has ashes from a customer’s horse in it. 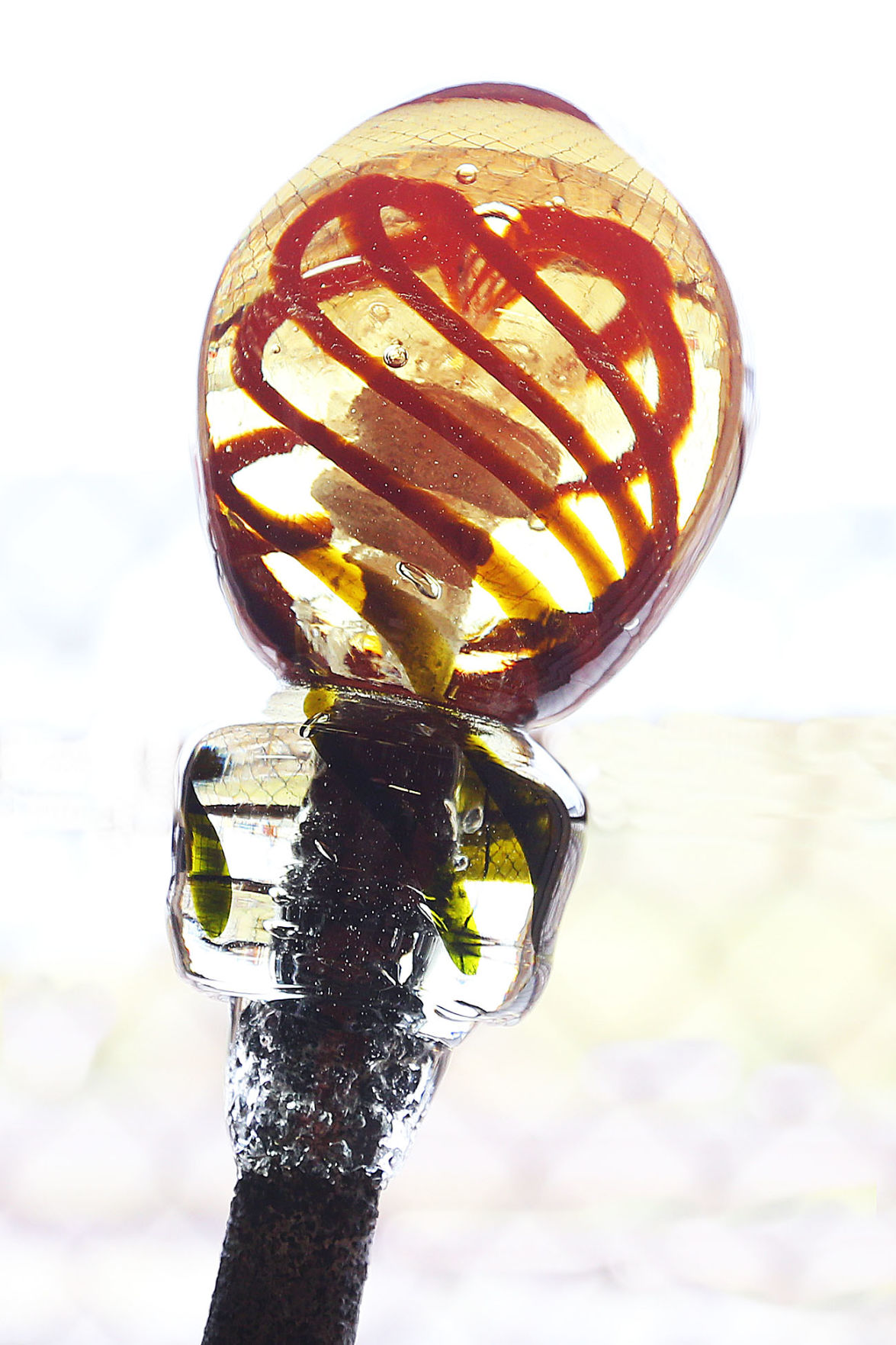 The finished paper weight with ashes from a customer’s horse in it. 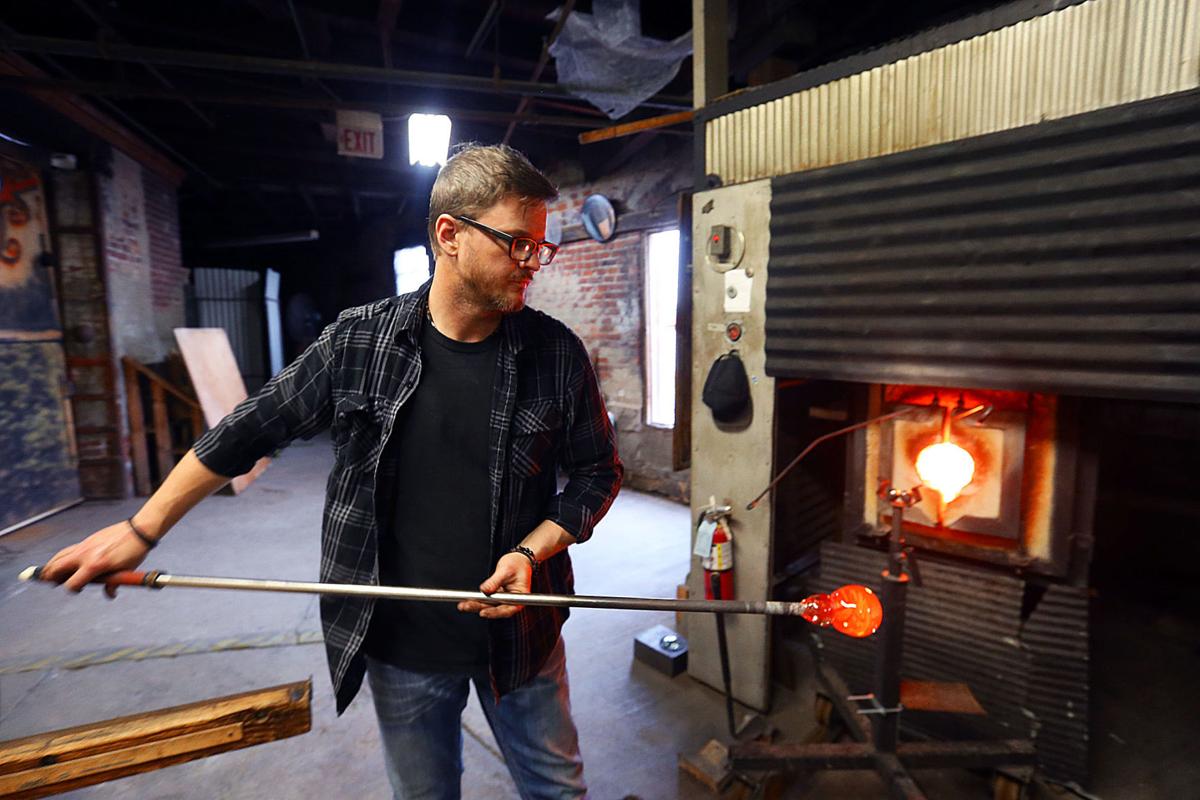 Options for storing or displaying ashes from loved ones or pets at Kokomo Opalescent Glass on February 3, 2020. Jeff Simmons produces a paper weight with creamation ashes in it. Tim Bath | Kokomo Tribune 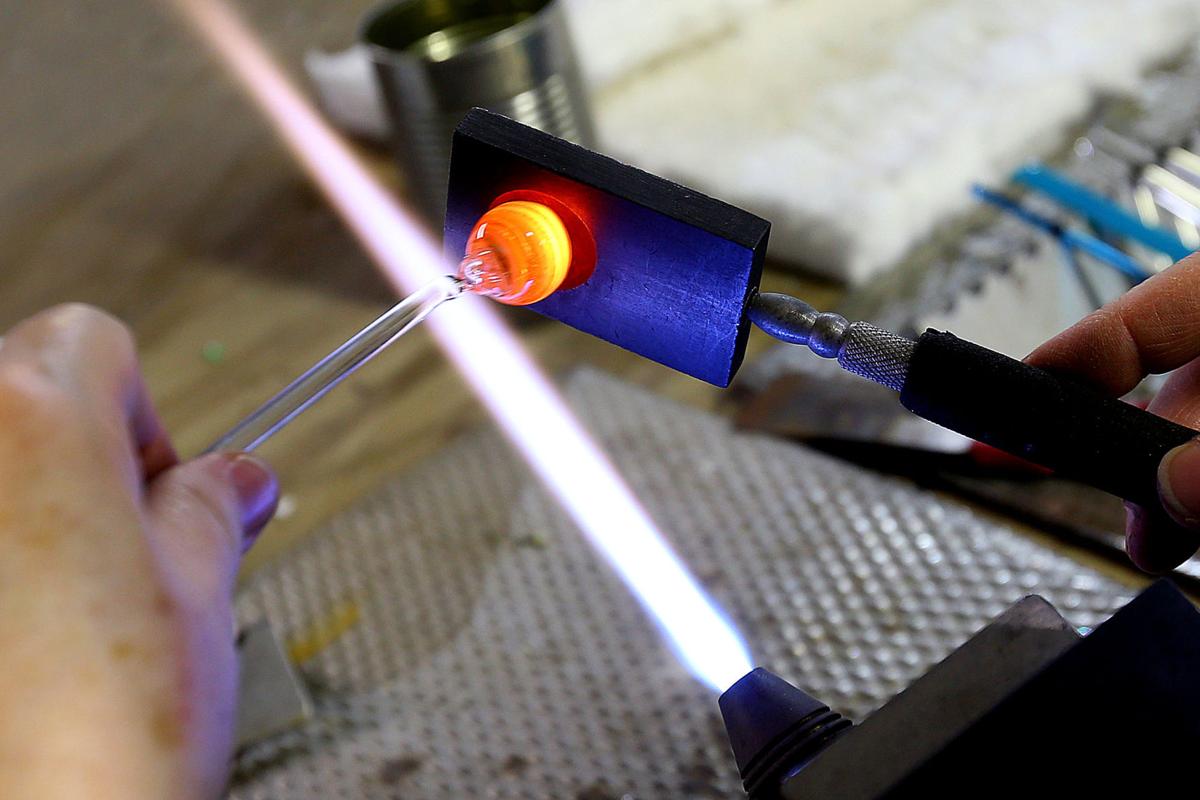 A glass bead being made with ashes from loved ones or pets at Kokomo Opalescent Glass on February 3, 2020. Tim Bath | Kokomo Tribune

Jeff Simmons creates a paper weight with cremation ashes in it.

The finished paper weight with ashes from a customer’s horse in it.

Katie Bray has a large paperweight sitting on her nightstand by her bed that always reminds her of her mother, who died in April after a battle with pancreatic cancer.

And the reason the paperweight reminds Bray of her mom is because part of it actually is her mom.

Inside the piece is blue and yellow glass swirling beautifully together. Those colors are complemented by white strands that seem to float inside the paperweight.

It’s the white swirls that come from the ashes of Bray’s mother after she was cremated.

The ash-infused paperweight was handcrafted by the renowned glass blowers at Kokomo Opalescent Glass, the oldest art-glass factory in the U.S.

KOG CEO Jeff Shaw said the factory began offering the service to customers about three or four years ago after people started approaching them to see if they could make glass pieces imbued with cremains.

In fact, Shaw said, he didn’t even know the factory offered the service when he purchased the factory in 2017.

“I was like, ‘Whoa!” he said. “It was a little bit of a surprise. It was a small segment of the business that I wasn’t even aware of till I saw it being done.”

At first, the factory got a few special orders here and there for the service, but it didn’t take long before news spread. More and more requests started to come in, and what started out quietly as a niche product soon caught on as a regular service.

Jeff Simmons, a glassblower at the plant, said today, he makes on average three pieces a week infused with cremains, but there have been times where’s he done over 10 in a week. About half are made with the ashes of loved ones, and the other half are pets.

On a recent weekday afternoon, Simmons was working on infusing a paperweight with ashes from a family’s beloved horse.

After pulling a molten, glowing-red orb from the furnace, Simmons rolled it in the finely sifted ashes of the animal and began to work the cremains in the center of the paperweight. Soon, the cremains swirled inside, encased as silvery white strands that sparkled in the light.

Simmons creates stunning art glass pieces every day in the KOG studio, but he said there’s always something special about creating the ash-infused products.

“It’s an anonymous sense of honor,” he said. “If you can help someone find a rainbow in a storm, it’s pretty cool to be a part of that.”

For 71-year-old Kokomo native Steve Barker, the paperweight imbued with his wife’s ashes is a memorial he wouldn’t trade for anything. The two were married for 48 years before she passed away last year after a long battle with Alzheimer’s.

Barker said he learned about the cremains service from his kids, and they all ended up getting their own ash-infused paperweight that’s also melded with lavender-colored glass.

“Lavender was her favorite color,” he said. “It’s neat to have her here. It’s like part of her is here with us every day.”

Shaw said it’s amazing the cremains service has become so popular considering the company has never once advertised it. But it makes sense considering more and more people are being cremated, and glass blowing is seeing a kind of popular resurgence, he said. There’s even a Netflix show about it.

“We’re right in the eye of the storm on this trend,” Shaw said. “It’s old-world craftsmanship, and it’s something different you can do with the ashes to memorialize your loved one, rather than just a box or standard urn. It’s something that’s a little bit brighter and more positive to remember someone.”

And it’s more affordable than other options for using cremains, such as turning them into diamonds or jewelry. Shaw said people can get an ash-infused paperweight for around $140. They also can put ashes in glass pendants or beads.

People also have the options of actually creating the pieces themselves. KOG offers classes and allows families or individuals to come with cremains to make paperweights, beads or other objects to house the ashes.

That’s what Bray did when her mother passed away in April. She took her two kids to the plant, and they actually helped make the paperweights imbued with the ashes. For Bray’s 9-year-old son, who loves glassblowing, it was a deeply meaningful experience.

“It gave us a little bit of closure, seeing her all sealed up in there and knowing she was going to be next to us,” Bray said. “It was really great.”

Glassblower Simmons said it’s that kind of experience that guarantees the cremains service at KOG is only going to get more popular as more as more people find out about it.

“It’s one of those things that if you experience it, it’s hard to contain,” he said. “You want to tell people.”