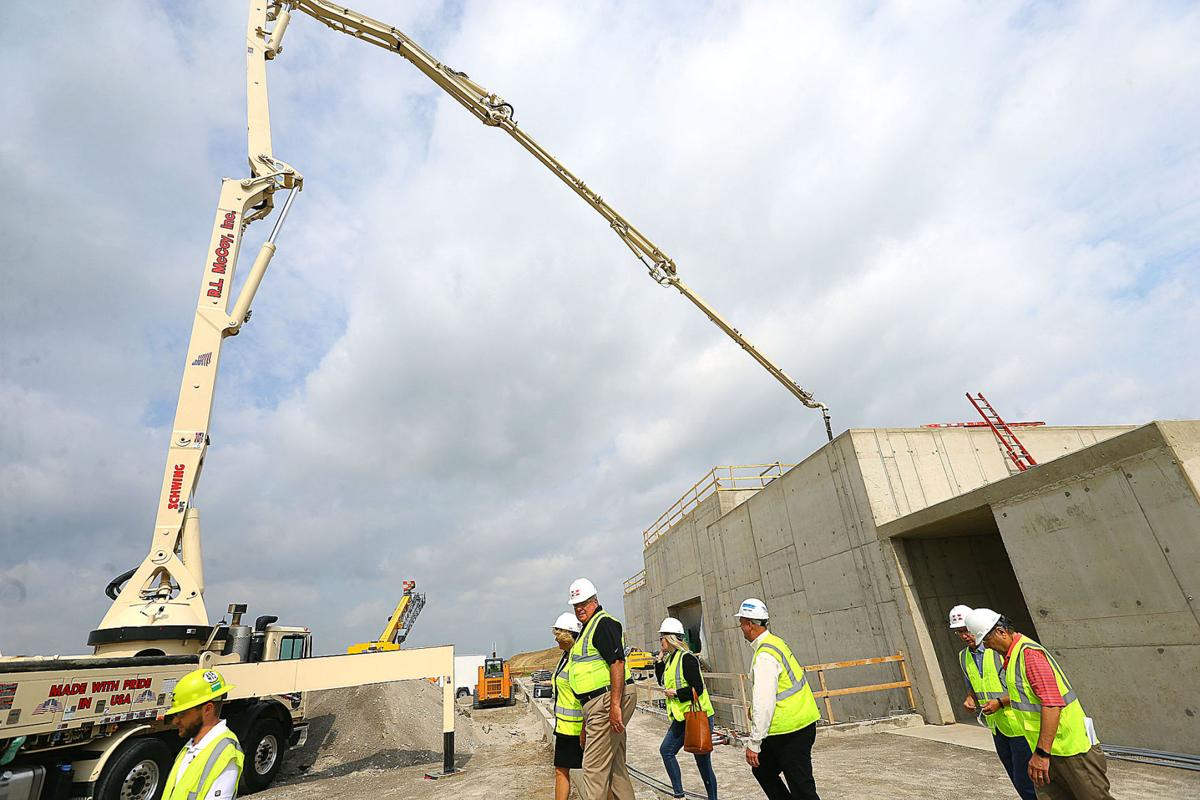 Arizona Isotopes executives on June 10, 2020, show their new facility, which will open later this year producing medical isotopes. More than 1,300 cement trucks will bring in over 13,000 cubic yards of concrete that will surround the equipment. The doors alone will weigh 80,000 pounds. 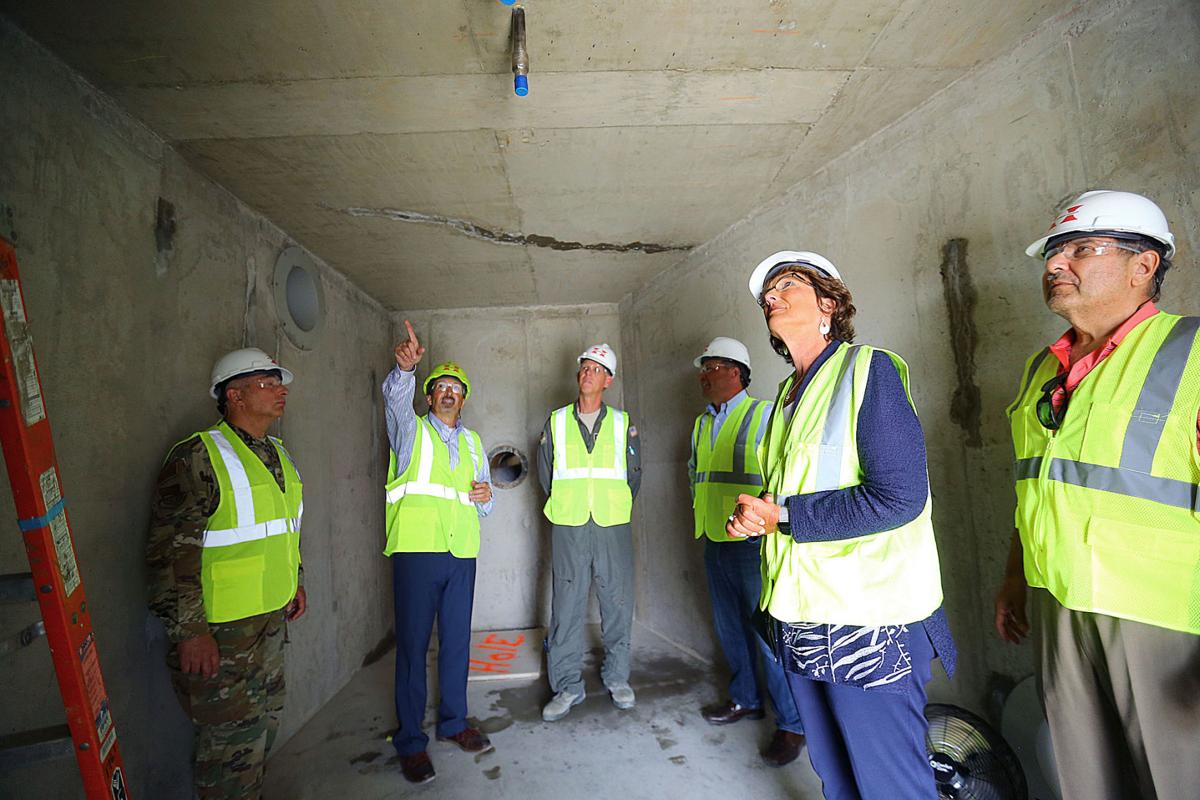 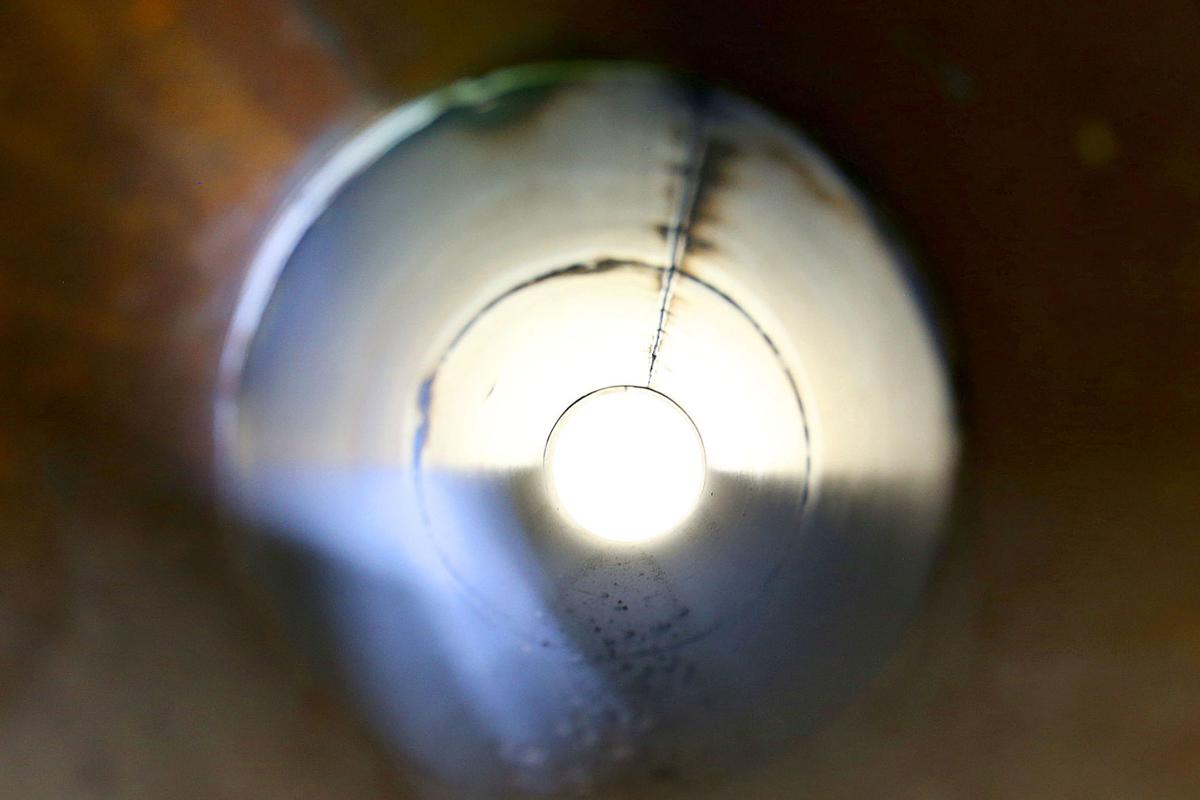 Arizona Isotopes will open later this year in Bunker Hill producing medical isotopes. Waves will be directed through a hole in the wall, from one chamber to the other. 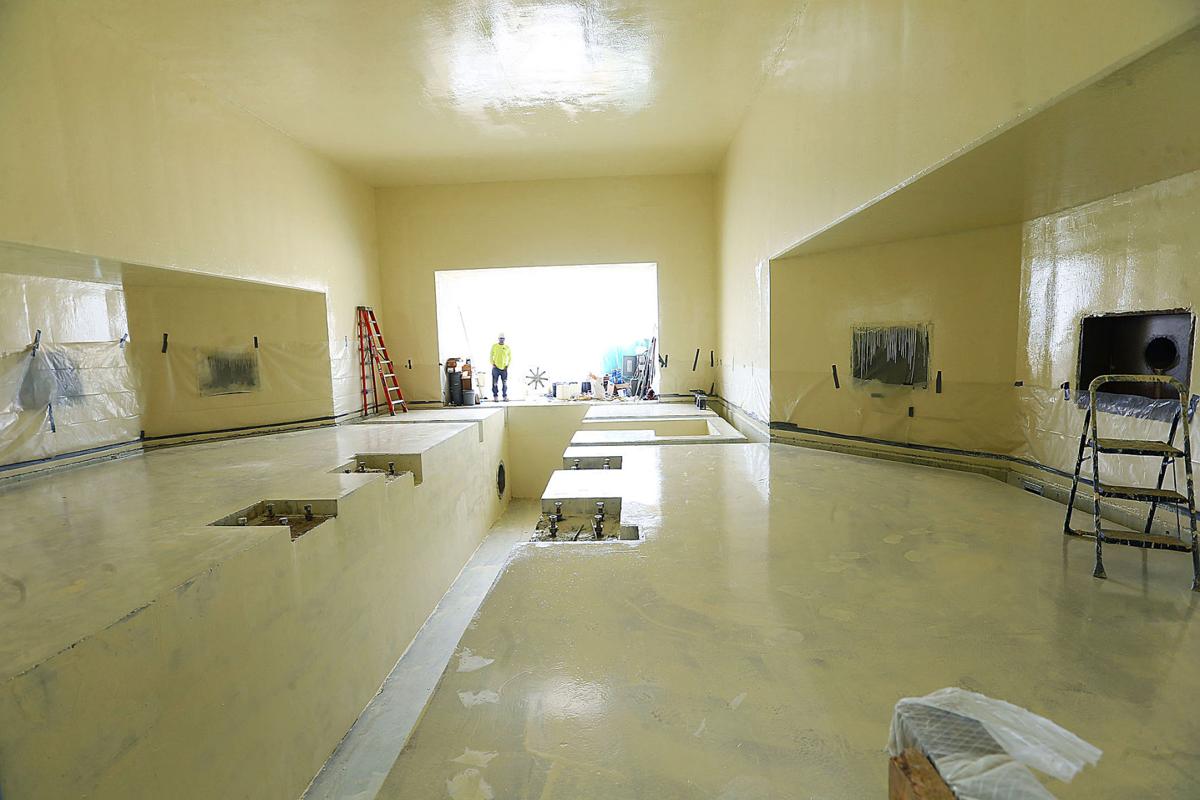 The 140-ton C70 Cyclotron will sit in this room, sending out rays through six tubes, with receiving hot cells on the other end to produce the isotopes.

Arizona Isotopes executives on June 10, 2020, show their new facility, which will open later this year producing medical isotopes. More than 1,300 cement trucks will bring in over 13,000 cubic yards of concrete that will surround the equipment. The doors alone will weigh 80,000 pounds.

Arizona Isotopes will open later this year in Bunker Hill producing medical isotopes. Waves will be directed through a hole in the wall, from one chamber to the other.

BUNKER HILL – Construction is well on its way on a state-of-the-art isotope production and scientific research facility near Grissom Air Reserve Base that will eventually serve as the campus and corporate offices of AZIstopes Corp.

The company is in the middle of constructing a new 28,000-square-foot facility along U.S. 31, at 7796 S. Innovation Way, that will soon house a 280,000-pound cyclotron machine being shipped from Belgium.

Wade Brooksby, chief operating officer and president, said the machine is currently on a ship and is set to arrive July 25 in Burns Harbor, Indiana, where it will be trucked down U.S. 31 to the facility.

On Wednesday, U.S. Rep. Jackie Walorski, whose district includes Miami County, and other local officials toured the facility, as crews continued to construct the building that will soon house the cyclotron, which accelerates particles to create medical isotopes.

Nearly 10-foot-thick walls made mostly of concrete were in place that will surround the machine to ensure no radiation escapes from inside. Another 8-foot-thick ceiling of concrete will top the structure.

The new construction is part of an expansion of a 55,000-square-foot shell building the county constructed in 2015 to attract new businesses to the area. AZIsotopes purchased the entire building last year, along with 20 acres of land, for $2.775 million.

Brooksby said the shell building will eventually house smaller cyclotron machines, as well as office space and mechanical and electrical control rooms to run all the equipment. Around 8,000 square feet will be available for lease.

In total, the project represents a $70 million investment from the company. Brooksby said around 60% of that money comes from investors, and the remaining money has been loaned by First Farmers Bank & Trust.

John Zehner, CEO of SpectronRx, which has worked with AZIsotopes for years on developing the project, said the cyclotron machine should be in place by August, but it will take months before the machine is fined-tuned and ready to operate.

His company is also working to ensure the facility and the isotopes are cleared for sale by the Food and Drug Administration, and the site meets federal and state guidelines.

“There are so many regulatory hoops and so much paper work you have to complete for something like this, as you can imagine,” Zehner said.

Once the cyclotron is up and running, it will produce high-level isotopes used for diagnostic imaging and therapeutic treatment, Brooksby said. The isotopes created at the facility are either currently in short supply or have a good chance of becoming critical shortages.

But the project is now facing a major obstacle that could delay production.

Brooksby said five engineers, from the company in Belgium which made the machine, were scheduled to fly to Indiana to oversee the installation of the cyclotron. However, due to travel restrictions because of COVID-19, those engineers aren’t allowed to travel to the U.S.

“Nobody else can do it,” he said. “It’s just them … We can’t do anything without them.”

Walorski told Brooksby on Wednesday she was aware of the issue and was working to get the engineers permission to enter the country so the project could move forward as scheduled.

Once the machine is installed, it will be only the second of its kind in the U.S. The only other facility is located in Noblesville and is owned by a hospital. At the same time, the machine will become one of only a handful of cyclotrons in the country producing medical isotopes.

Zehner said AZIsotopes has already started hiring people to work at the facility, and more people will start arriving on-site once the cyclotron arrives next month.

Brooksby said the company initially plans to hire around 50 workers, who will earn an average wage of $49.45 an hour. Nearly all the workers will be from Indiana.

But that’s just the beginning of what the company has planned at the site.

Once the cyclotron facility is done, he said, the company plans to continue constructing buildings at the site and turn the area into its corporate headquarters. The goal is to also attract other customers and vendors to the site to consolidate the production and sale of the isotopes.

“Our future vision is to make this into a campus,” Brooksby said. “The hiring path isn’t just one or two years. It’s going to be constant over the next five, six or 10 years.”

He said the original plan was to use the Miami County site as small production center, with corporate offices in Arizona and another production facility somewhere along the west coast.

The Indiana Economic Development Corp. also offered the company up to $1 million in conditional tax credits that it can tap into once Hoosiers are hired at the facility.

Zehner said there’s no doubt the company is going to bring a huge economic boost to the area that will likely attract other companies to move to Miami County, bringing even more jobs and investment.

“Everyone is always looking for a magnet to bring businesses in to their area,” he said. “I joke that this is about as big of a magnet that you can get. We really believe once we have this campus here and have the staffing, it’s going to attract other companies to the area.”