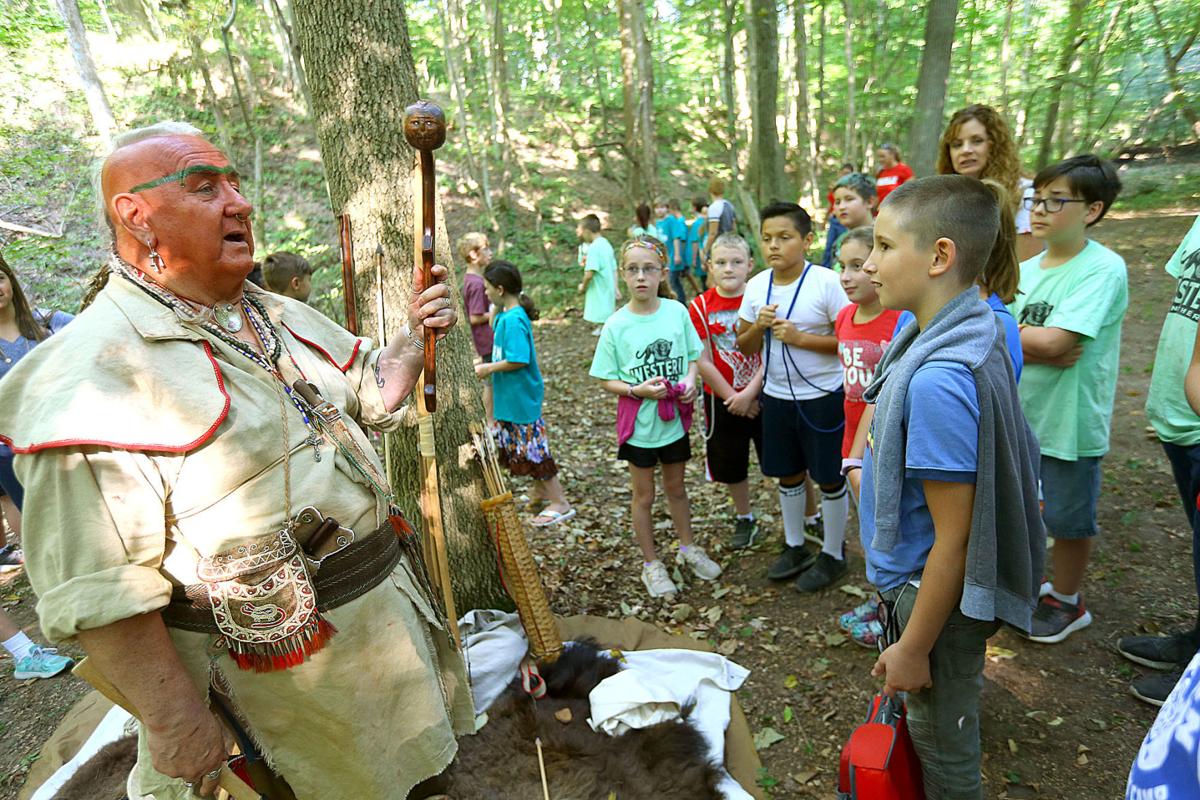 Dan Lima who goes by White Crow portrays a Delaware Indian. He is the camp elder and is talking about weapons. Over a thousand 4th graders participate in Koh-Koh-Mah & Foster Living History Encampment on Sept. 20, 2019. 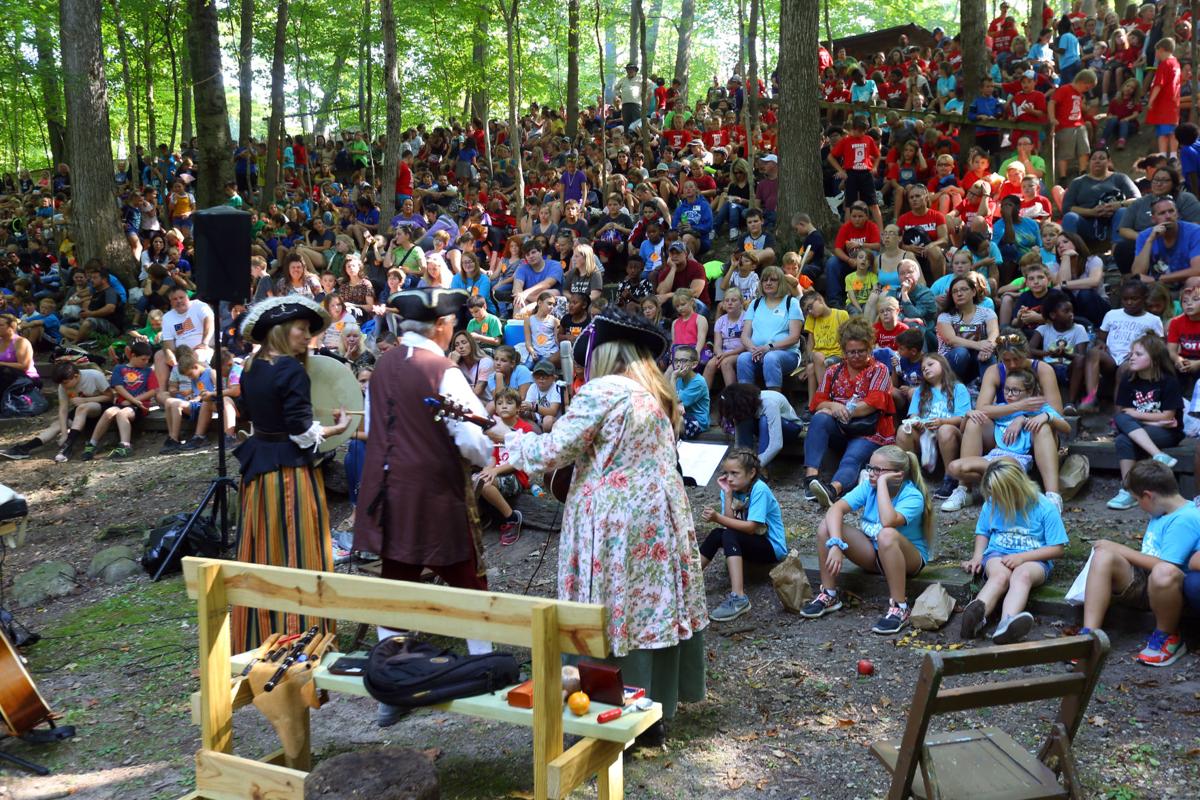 Organizer Bob Auth plays music for the kids while they finish their lunches and before the battle begins. Over a thousand 4th graders participate in Koh-Koh-Mah & Foster Living History Encampment on Sept. 20, 2019. 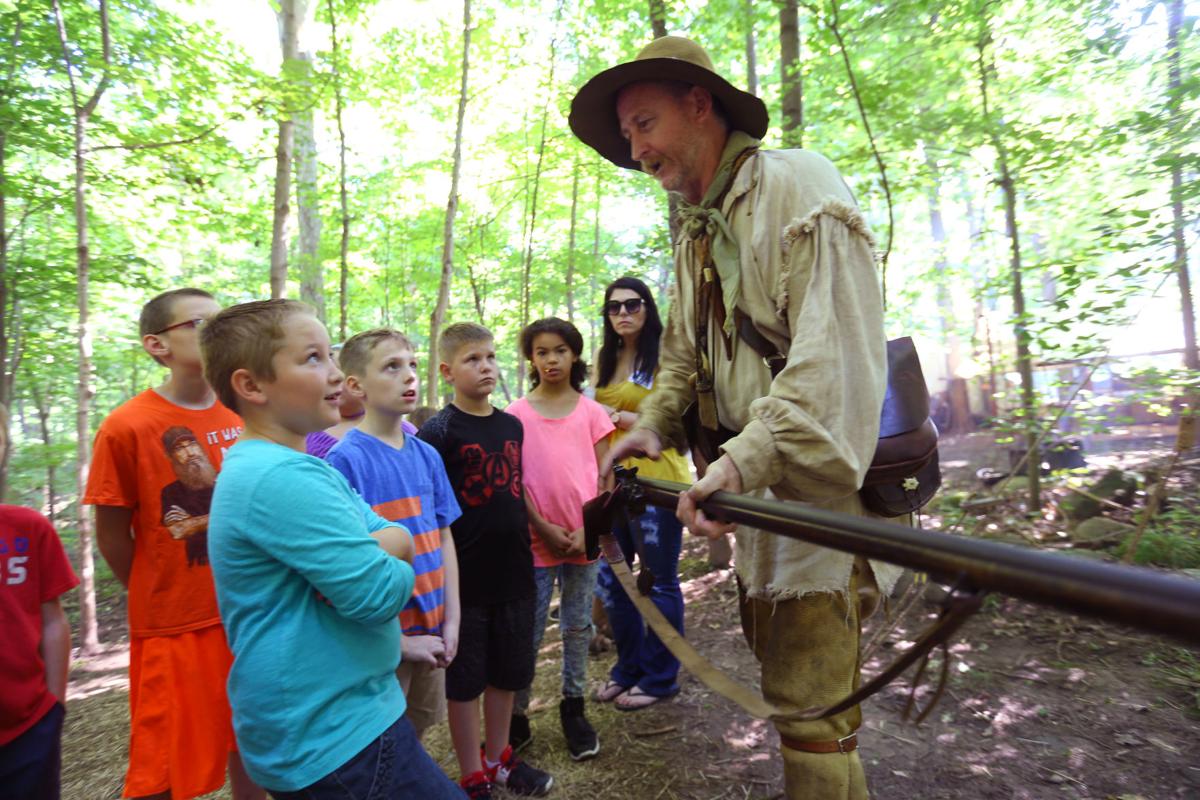 Dan Lima who goes by White Crow portrays a Delaware Indian. He is the camp elder and is talking about weapons. Over a thousand 4th graders participate in Koh-Koh-Mah & Foster Living History Encampment on Sept. 20, 2019.

Organizer Bob Auth plays music for the kids while they finish their lunches and before the battle begins. Over a thousand 4th graders participate in Koh-Koh-Mah & Foster Living History Encampment on Sept. 20, 2019.

Bob Auth said planning the annual Koh-Koh-Mah event this year felt a little like planning a funeral for his best friend.

That’s because after 20 seasons, the historical reenactment and encampment that has drawn tens of thousands of visitors and over 30,000 students to western Howard County is ending.

Auth, 67, who organizes the event with Pat Scott, 73, said the decision to end the 18th-century reenactment wasn’t easy. In fact, it was painful. But it had to be made, he said.

He said he and other key organizers are also dealing with health issues that have made it hard to keep up with all the planning required for the event.

Then there’s the fact Auth had always planned to end the event on a five-year increment. Last year’s event was canceled due to COVID, so this year marks the 20th season.

Auth said if they hadn’t canceled last year, they likely would have planned on organizing the reenactment for another five years. But it wasn’t meant to be.

“It does hurt,” he said. “It’s going to be a tough one having the closing here on Sunday. There will be some tears shed. All the reenactors have become more like family. You feel connected.”

Scott said although it’s going to be tough to say goodbye to Koh-Koh-Mah, they’d rather end the event now when they can still put on the kind of top-notch experience that people have come to expect over the last two decades.

“We just decided to stop on top,” she said.

Now, Auth said, the fact that this will be the last year is just one more reason to come out this weekend to experience first-hand all the encampment has to offer while learning about some local and state history.

“We go through a lot of black powder with the cannon and musket fire,” Auth said.

A major highlight of the event is a reenactment of David Foster, the founder of the first trading post in Howard County who later went on to establish Kokomo.

Auth said this year will be extra special, considering Foster’s great-great-great-grandson, also named David Foster, will be portraying his ancestor during the event.

Auth said for him, the best part of the event is Friday, when over 1,000 students from schools all around the area attend the encampment to learn about life in 1700s. Activities include candle making, 18th-century games and a Native drum dance.

“I just love Fridays,” he said. “I love watching these kids.”

Auth said he’s had an outpouring of support from area teachers who said they’re sad to see the event ending. Those have been some of the hardest messages to get, he said.

“They said they’ve had more history education take place right here on the grounds than in the classroom,” Auth said. “Then they put a sad face in there with tears running down.”

Auth owns the grounds on which the living encampment is situated. He started the event in 2000 as a tribute to Howard County history, with an emphasis on Chief Koh-Koh-Mah and David Foster.

Over the years, the event has steadily grown to include camps for the British and French military and the Eastern Woodland Indians.

The event began as a partnership with the Howard County Historical Society to educate the whole family on the French and Indian War. Today, there is a committee, dozens of demonstrators and around 1,000 reenactors coming from around the nation to make the event what it is today.

Scott said the event has grown and evolved over the years and for her, that evolution includes the reenactors and demonstrators all coming to feel like family.

“The comradery among all these friends is a major part of why you want to go out and do these things,” she said. “It’s not just teaching history. That’s a big part of it, but we all just can’t wait to see each other.”

And that’s why it’s so hard to say goodbye, Auth said.

For 20 years, Koh-Koh-Mah has played a major part in his life, and the hundreds of people who help him put it on every year have become his best friends. He’s seen people who came to the event as kids that are now attending with their own children.

It’s sad to see it go, Auth said, but it also feels good knowing he left a mark on the community and helped bring history to life for so many students over the years.

“I really appreciate the support this community has given to Koh-Koh-Mah,” he said. “It brings tears to my eyes just thinking about it.”

Here is a full schedule of events for the final Koh-Koh-Mah and Foster Living History Encampment this weekend. The encampment is located at 100 South 1000 West in rural Howard County.

1: Tomahawk throwing (Amphitheatre); Improving your quilt stitches workshop by Cathy Grafton, limited to 10 re-enactors only, but public welcome to view

11: Tug of war (Parade Field), sign up and get details at Samson Historical Merchant Tent