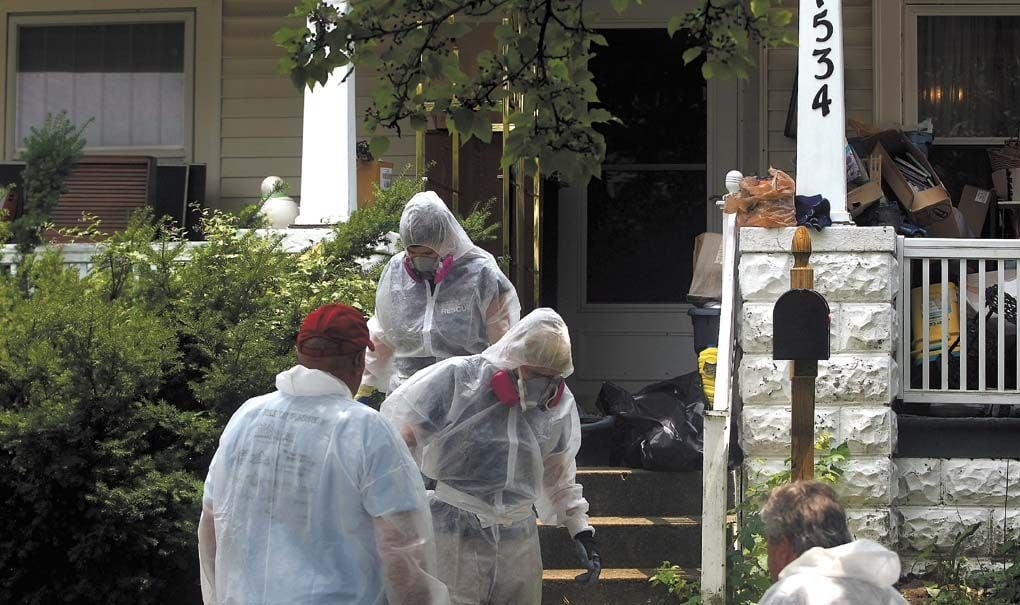 Taking precautions: Workers wearing protective gear exit the home of Vula Moody on South Armstrong Street. The work being done is part of a taping for the A&E reality show “Hoarders.” 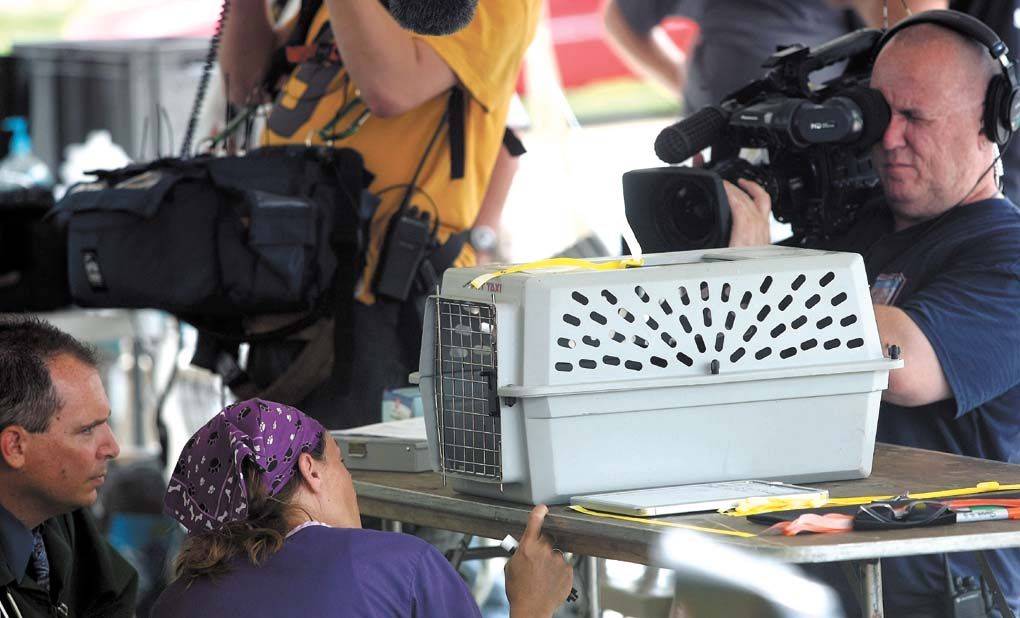 Caged: A TV crew films animal specialists while they look at a cat removed from the house. According to animal control, six cats had been removed Thursday, with probably another dozen still inside.

Taking precautions: Workers wearing protective gear exit the home of Vula Moody on South Armstrong Street. The work being done is part of a taping for the A&E reality show “Hoarders.”

Caged: A TV crew films animal specialists while they look at a cat removed from the house. According to animal control, six cats had been removed Thursday, with probably another dozen still inside.

The cast and crew of the A and E reality show “Hoarders” began filming Thursday in the 1500 block of South Armstrong Street, documenting one homeowner’s struggles with clutter and cats.

They’ll be there until late Saturday, helping Vula Moody separate herself from decades worth of accumulation.

Neighbors watched from their front porches as “Hoarders” personnel and animal control experts moved in and out of the home, many emerging with cat feces caked on the soles of their rubber boots.

Billy Bryant, animal control officer with the Kokomo Humane Society, said six cats had been removed by mid-afternoon Thursday, with probably another dozen cats still inside.

“They seem domesticated, but there are some health issues,” Bryant said. “There’s so much debris inside. That’s what’s really making it difficult.”

The cats are being evaluated at a local veterinarian’s office, he said. They’ll stay there as the work continues.

Today, the show will bring in a moving van to haul away some of the items Moody has stored inside and outside the home.

This spring, neighbors intensified demands for a city cleanup of the property, after Moody apparently ran out of space to store things inside the modest home.

When the Tribune went to the property in May, bags of cat food and miscellaneous items ran from the small porch on the Firmin Street side of the home down to Moody’s driveway.

At the time, Moody said she had only one neighbor who habitually complained, and said she had been purchasing presents for her family.

She said some of the items she’d left outside were heavy, and “it doesn’t make sense to take it all inside and then haul it back out.”

“I just went to Wal-Mart and Meijer. They had cat food on sale for half price, so I bought all they had because I do have animals,” she said in May.

Thursday, she sat quietly under a tent as the show’s personnel went about their business, sometimes engaging in conversation with the producers while cameras rolled. Several relatives, including some up from Texas, were also on set Thursday.

Kokomo firefighters were at the scene, running a decontamination station for the workers. As the workers emerged from the house, the firefighters would spray off their boots and swab the boots with a bleach solution.

Reporters and gawkers were kept about 30 feet from the house, but even that was close enough to catch a whiff of cat feces emanating from the home.

A and E hasn’t yet set a date when the Moody home cleanup will air. The show’s producers expect it will be one of the homes featured in the upcoming season of the show, which starts in September.

Kokomo city officials held off enforcing a cleanup of the home for several weeks, in anticipation the show would perform a more extensive cleanup of the property, at no expense to taxpayers.

• Scott Smith is a Kokomo Tribune staff writer. He may be reached at 765-454-8569 or via e-mail at scott.smith@kokomotribune.com