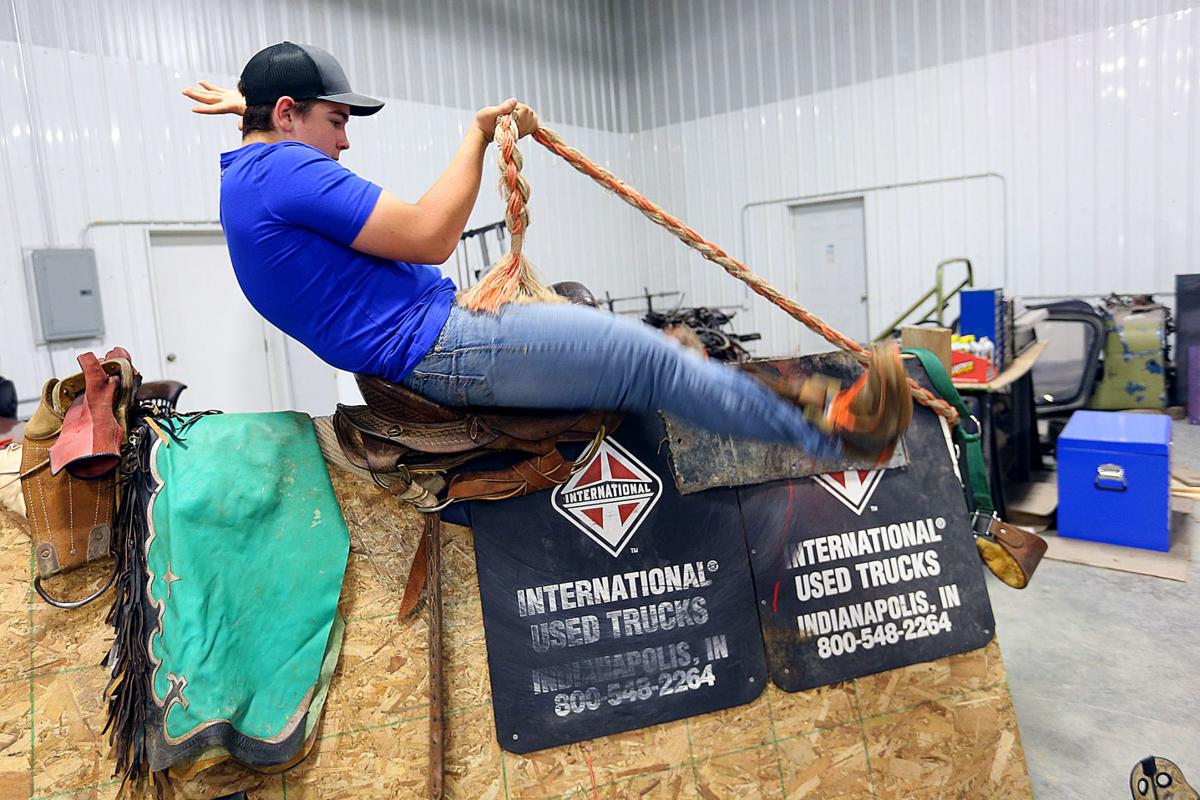 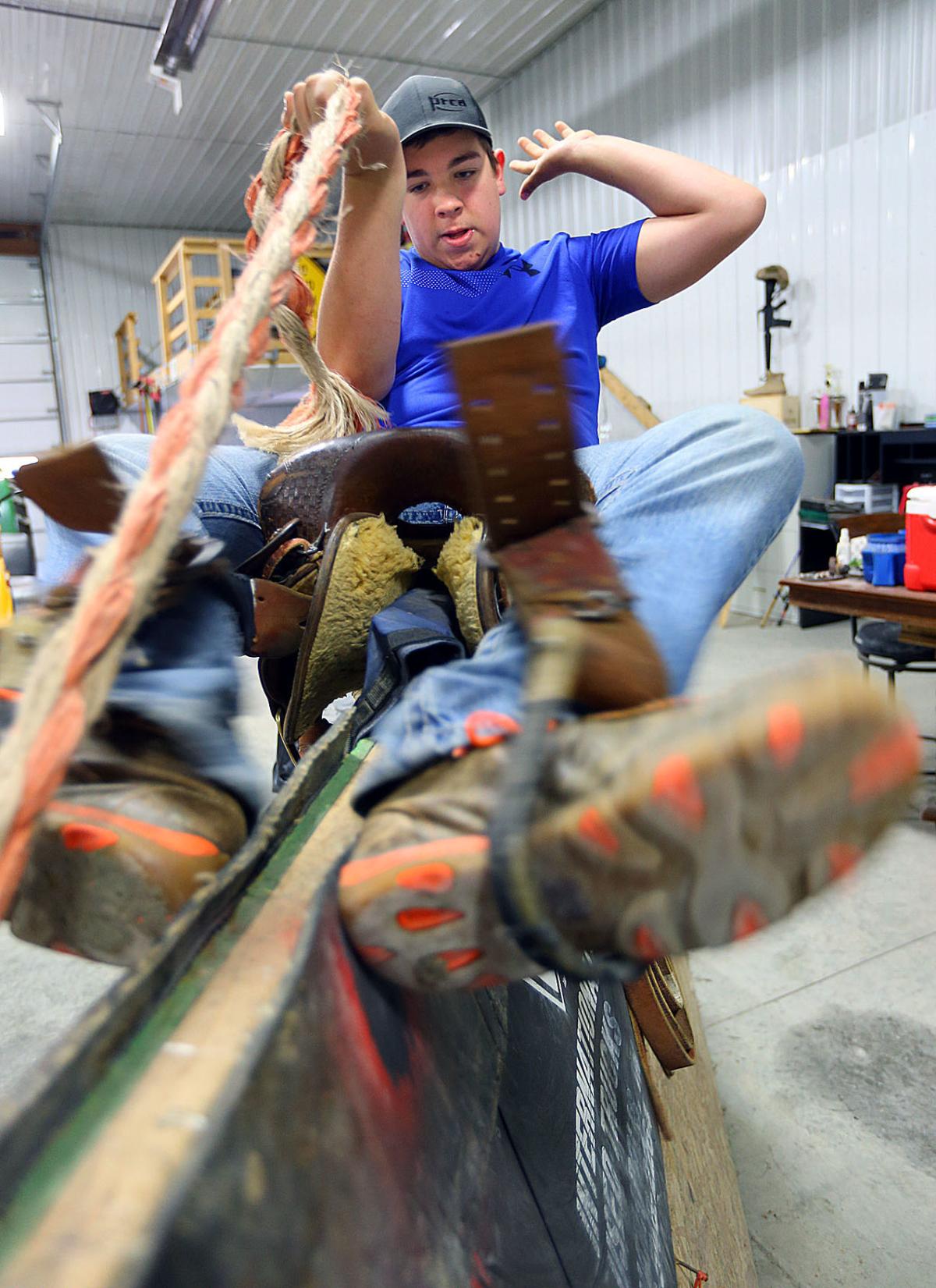 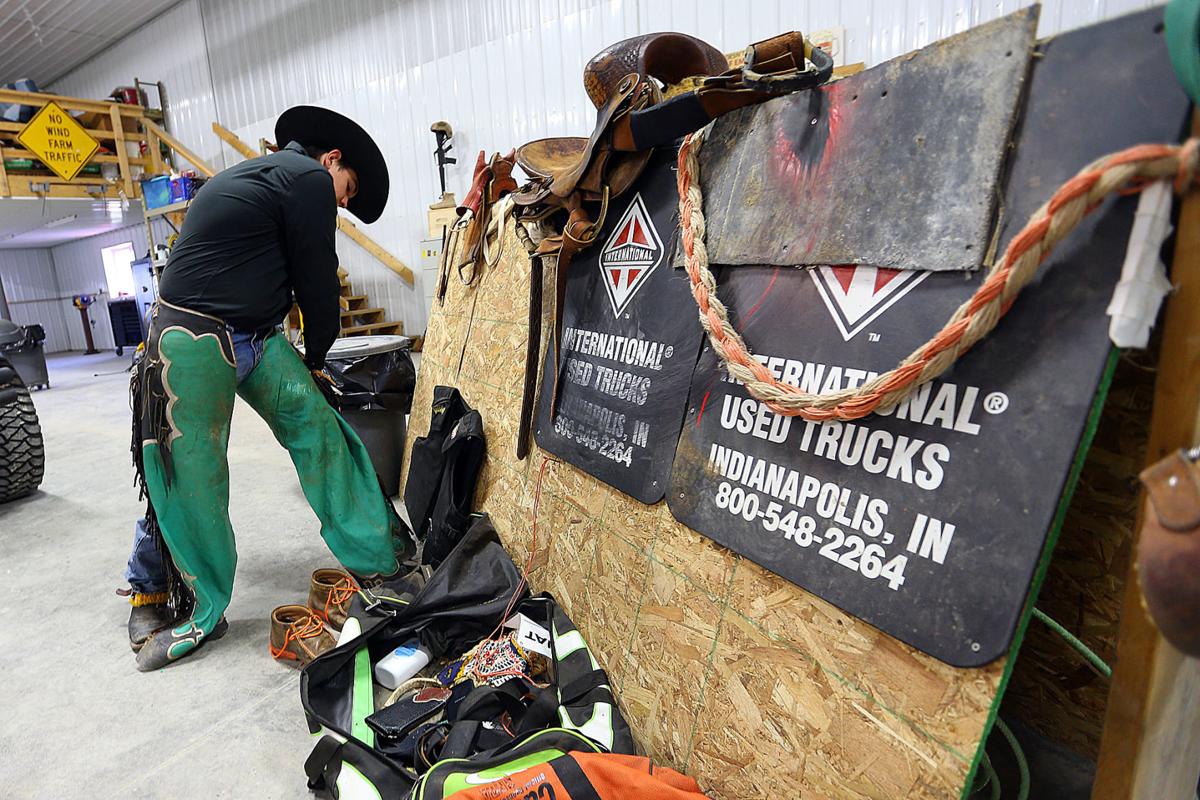 Thomas Williams, 15, practices saddle bronc riding form every day at his farm in Elwood, Indiana. Here he is strapping on his chaps, part of the protective gear he has to wear. Tim Bath | Kokomo Tribune 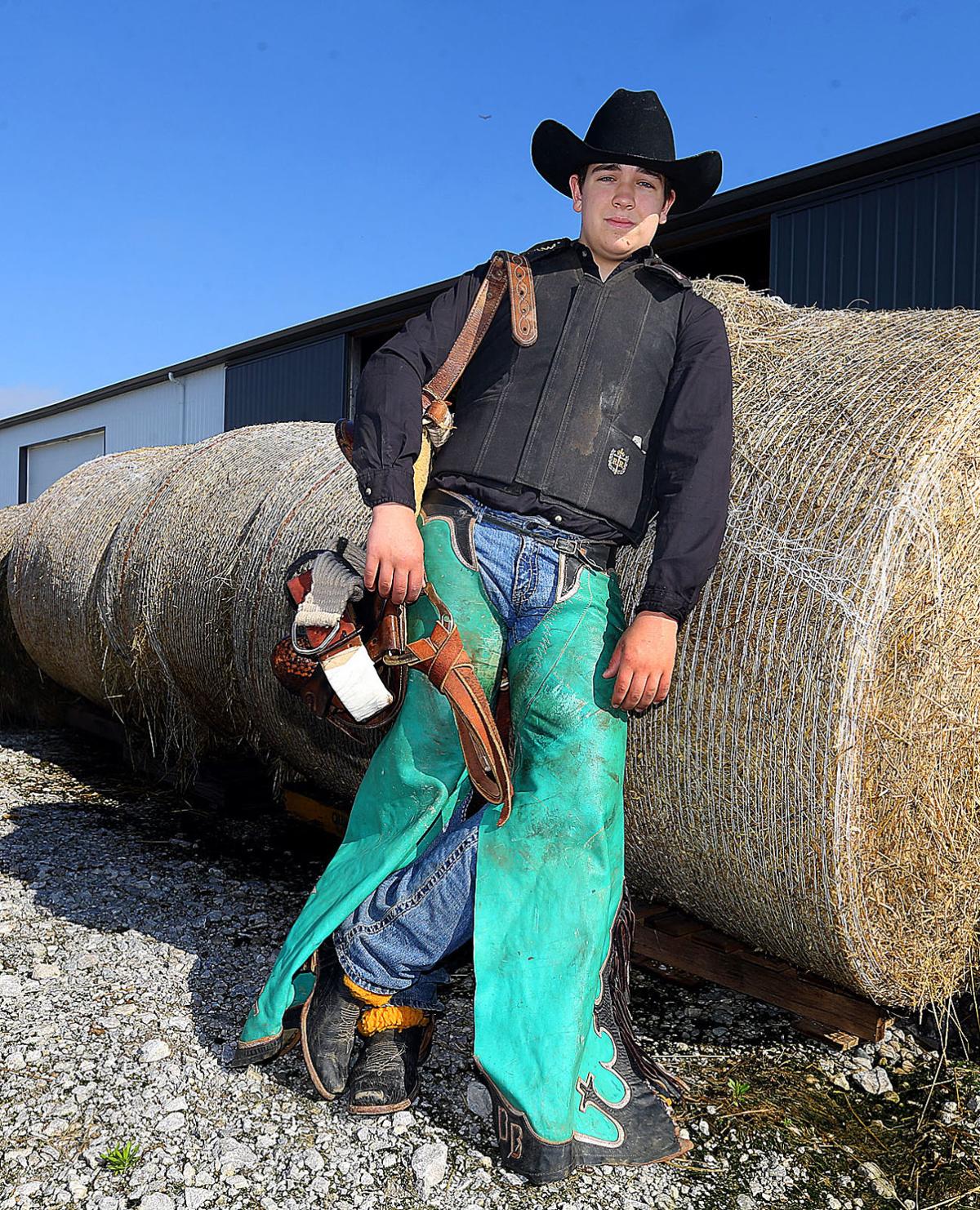 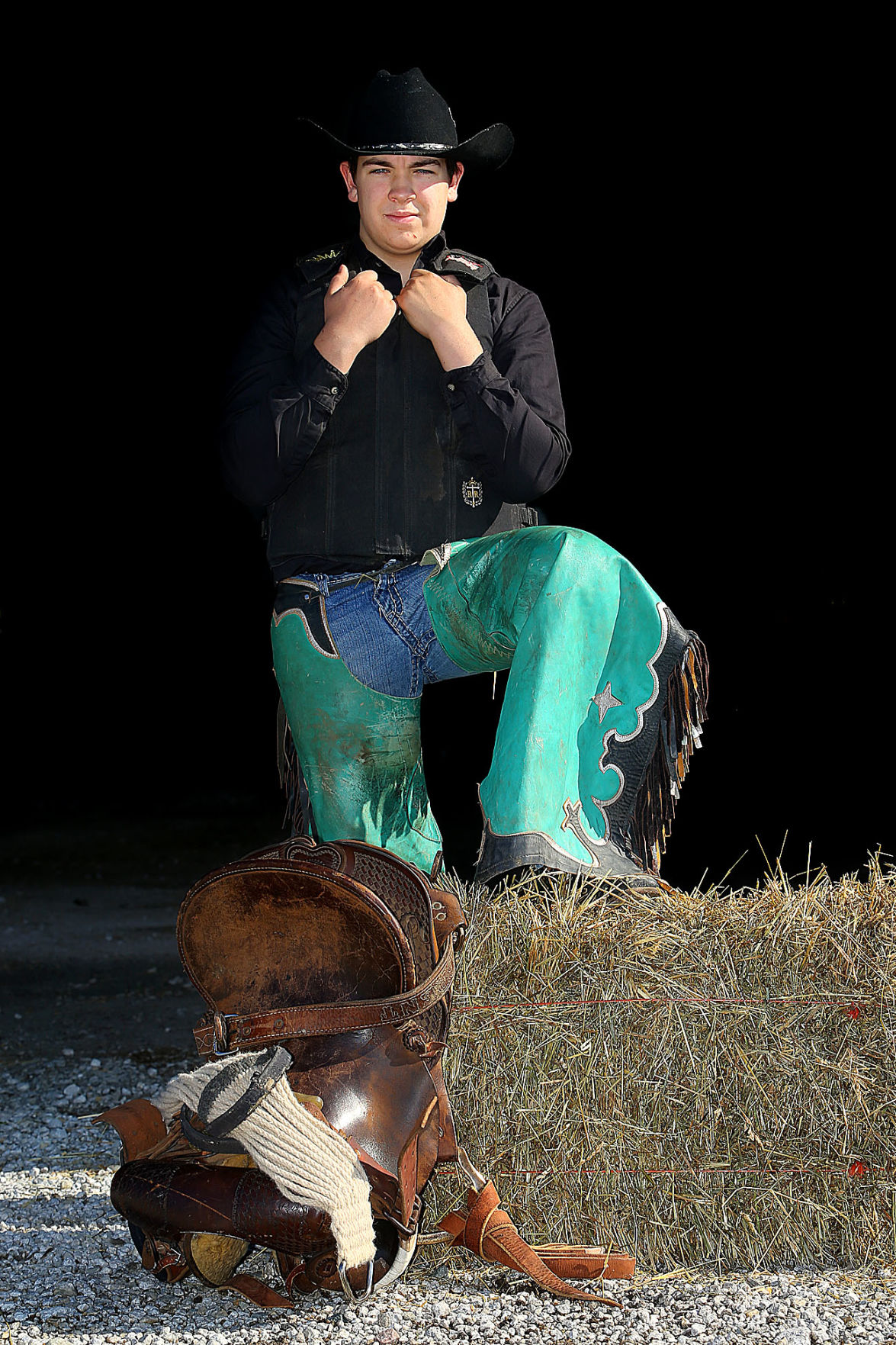 Thomas Williams, 15, practices saddle bronc riding form every day at his farm in Elwood, Indiana. Here he is strapping on his chaps, part of the protective gear he has to wear. Tim Bath | Kokomo Tribune

All the proceeds raised from the International Professional Rodeo Association's sanctioned event will benefit Kantering Kids, club leader Sammy Ziegler said, which will ultimately go toward a new cover for the group’s arena at the fairgrounds.

“We have for the past five to seven years had to move our fair show because the grounds were flooded,” Zeigler said, “and so we’re trying to get estimates and put blueprints together to put a cover on the arena so our kids would at least be able to show like the rest of their friends at the county fair.”

And while most of the competitors at tonight’s rodeo are from all across the United States, Williams lives just a few miles down the road.

“This is the first rodeo here in a long time, so it’s exciting but a lot of pressure,” he said, referring to competing in front of a hometown crowd. “It’s a little bit of nerves, but it’s also part of the sport. I’m used to it. I usually don’t even hear the crowd when I’m out there.”

Williams said he has been around horses pretty much his whole life, but he has only been competing in saddle bronc riding for about a year now.

“This is something I’ve always wanted to do, but it took my mom a long time to let me do it,” he said, smiling. “But I’ve always loved rodeo and have always been around people that have done it. So I got into it and later went to Sankey Rodeo School in Georgia. That’s where I first learned about how to ride saddle bronc. I came back from that and began high school rodeo at THS.”

And right now, Williams is one of only three high school students who compete in saddle bronc riding in the state of Indiana. After next school year, he’ll be the only one.

“It’s a dying sport, so there aren’t many kids interested in it these days,” he said. “These bucking horses are wild, so they’re not typically in your own backyard. You usually have to go to out-of-state schools and stuff to ride them, and it can get expensive.”

Of course Williams’ end goal with saddle bronc riding is to eventually earn a scholarship to Oklahoma State University and possibly even compete on a professional level one day, though those dreams are still a long way off.

For right now, Williams is just content on continuing to perfect his craft, a task made difficult because every bucking horse is different. And even though he practices motions for an hour each day on a set of wooden boards set up in his family’s barn, there’s nothing quite like the real thing.

“When you get on the horse, you have no idea which way they’ll go,” he said. “They’re really intelligent animals, and you have to learn to really respect the horse because they’re going to give it their all every time. But at the end of the day, there’s no taming a wild horse. You’ll never out-power a 1,200-pound animal, so it’s all about learning the timing and the way they move.”

And the horses aren’t afraid to buck you right off either, Williams noted. In just the short time he’s been riding saddle bronc, Williams has already suffered two broken wrists, a sprained ankle and even some concussions.

But even with the injuries, Williams said he wouldn’t have it any other way.

“When you get on a horse and ride it for 8 seconds, it feels really good,” he said. “Rodeo and saddle bronc riding is never really between you and the competitor anyway. It’s about the relationship between you and the horse. When you conquer the horse, it’s an indescribable feeling.”

It’s a feeling that Williams said he wishes more young people would be able to experience too.

“If someone is interested in this, I’d say definitely get involved,” he said, “and find some rodeo schools that will help you out. But there’s really no room for fear in saddle bronc riding because fear will get you hurt.

"You have to give this thing 110% because saddle bronc riding is not for the weak. Anybody can do it if you want it hard enough. Just get on the horse, squeeze tight and give it everything you have to give.”