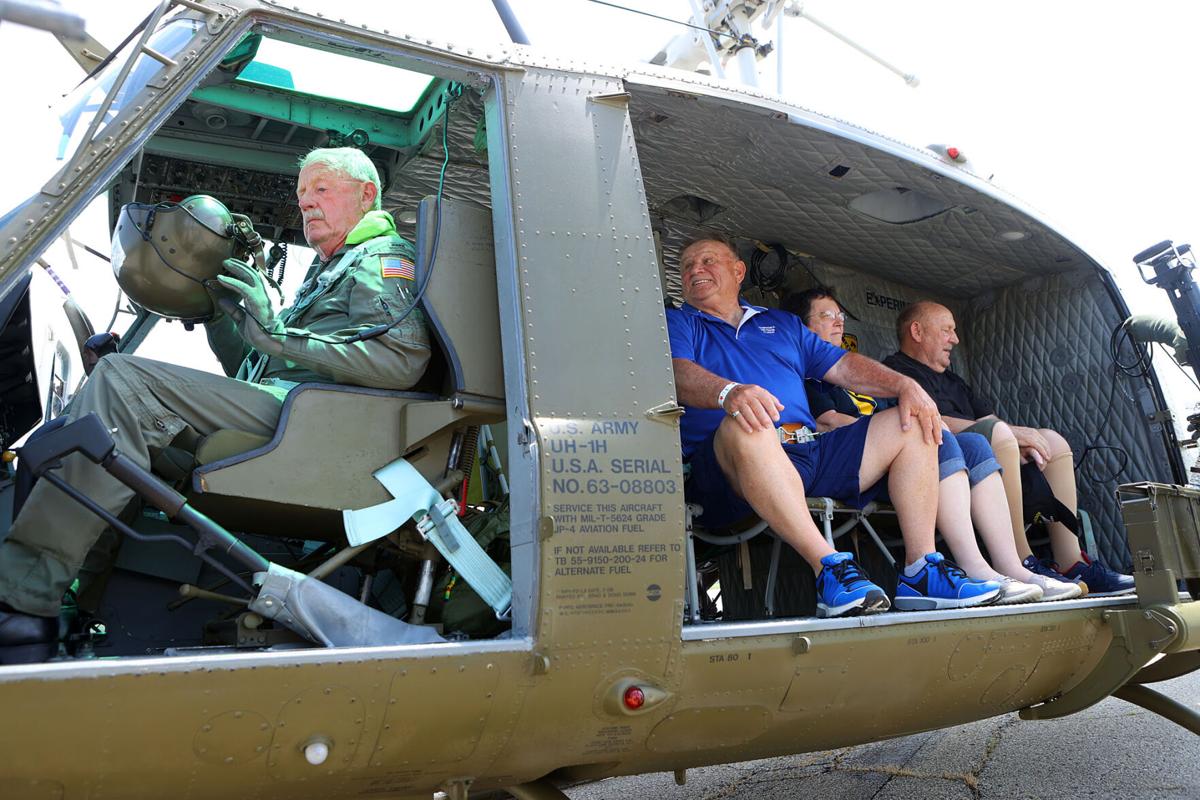 Co-pilot Ronald Paye, left, prepares for takeoff as passengers from left: Ronald Ingram, Judy Miller, and Corky Walsh get settled in the Huey helicopter. Ingram and Walsh both flew in that Huey helicopter in Vietnam and were part of the 15th Medical Battalion Annual Reunion at the Huey Museum on Saturday. 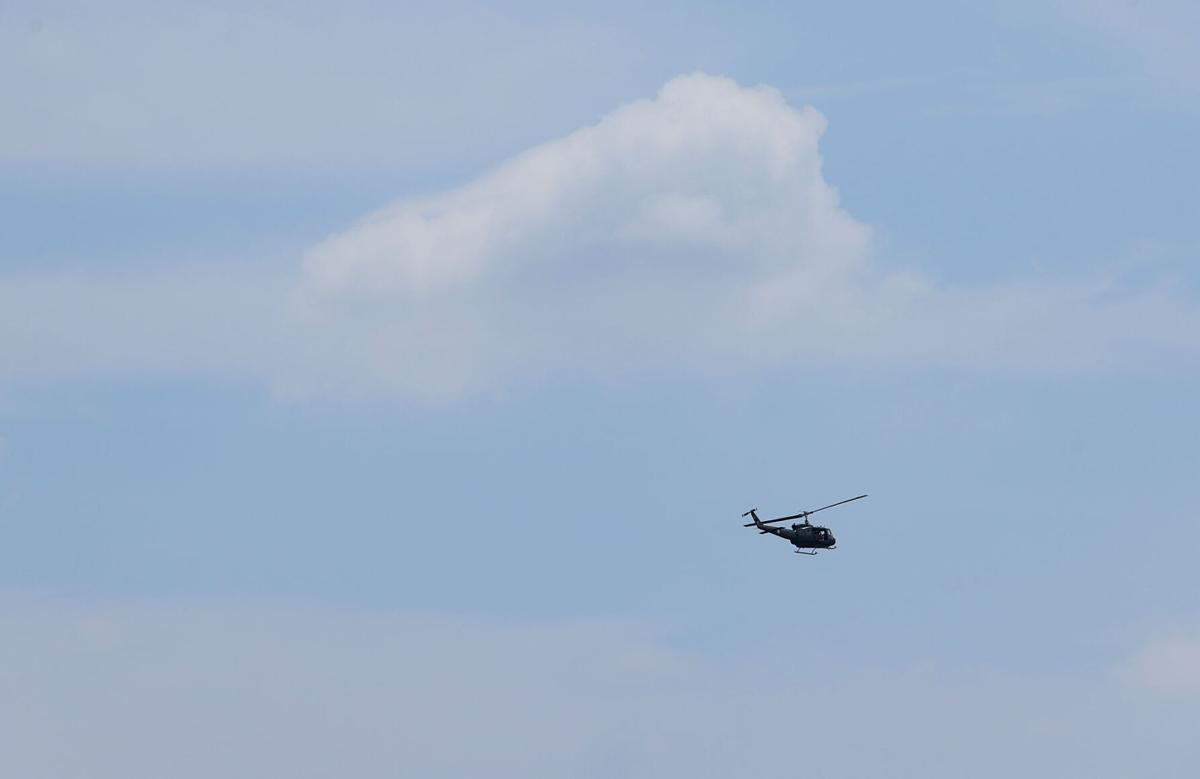 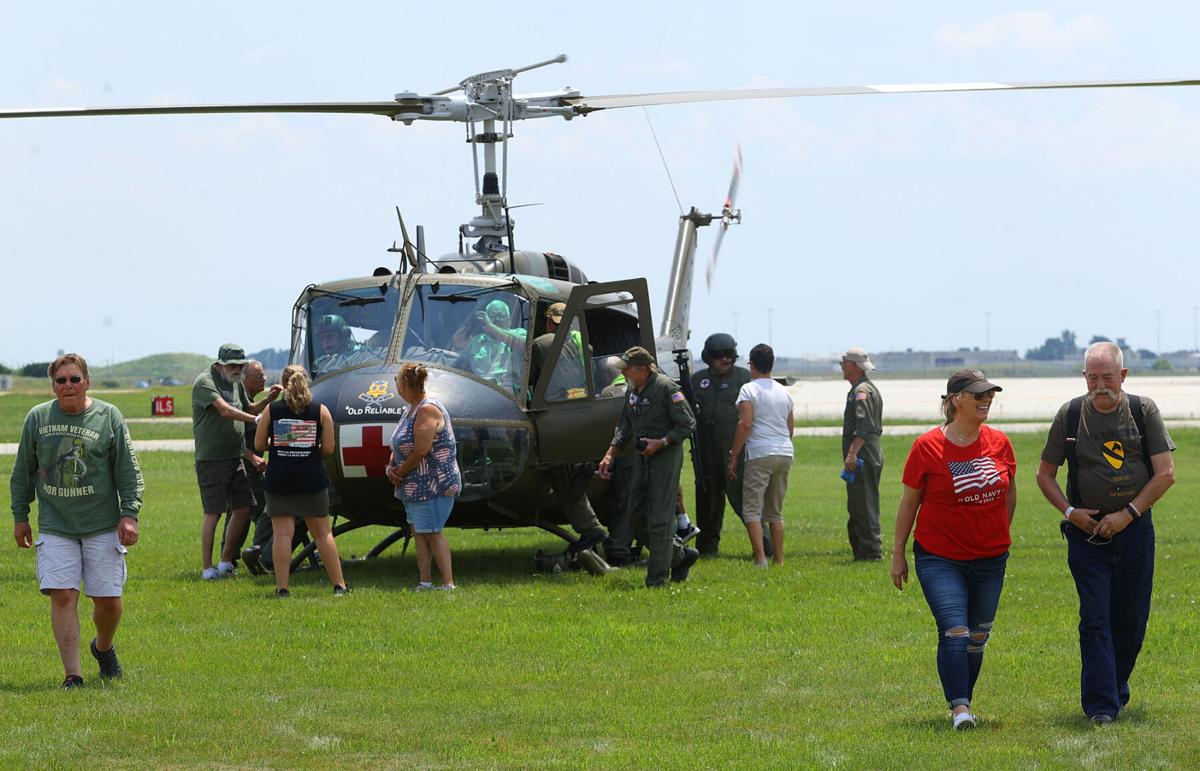 Vietnam veterans and their families had the opportunity to ride on a Huey helicopter during the 15th Medical Battalion Annual Reunion at the Huey Museum on Saturday, June 12, 2021.

BUNKER HILL — Maurice “Corky” Walsh stepped off the Huey helicopter and onto the tarmac at Grissom Air Reserve Base as the deep thumping of the blades subsided. The 75-year-old Vietnam veteran was grinning ear to ear.

It was a sound Walsh came to love when he served for a year as a crew chief and gunner in 1967 in the 15th Medical Battalion, 1st Cavalry Division in the U.S. Army.

And it was sound that brought back poignant memories for the around 30 Vietnam vets who on Saturday gathered at the American Huey Museum, which restores and commemorates the very same helicopters that were used in the 15th Medical Battalion.

Since 1998, veterans who served in that battalion have met every year at different locations around the country to swap stories, see old friends and remember their time serving in the war.

But this year's reunion in Kokomo was extra special. That’s because they all had a chance to watch or fly in the Huey medical evacuation helicopters in which many of them served as pilots, medics or gunners.

Since 2005, the museum has fully restored two Hueys, which are flown during special events, and turned another of the medivac aircraft into a static exhibit at its facility located at 1697 W. Hoosier Blvd.

But for 79-year-old Larry Hatch, it wasn’t a chance to fly in just any Huey. The museum in 2009 actually restored the very chopper which he piloted during his year of service in the battalion. In fact, when the museum acquired it, it still had the logo Hatch painted on it.

Museum founder John Walker eventually contacted Hatch about the restored medical helicopter and asked if he wanted to fly it.

Since then, the Olympia, Washington, resident has been flying it every year during the museum’s annual Patriot’s Weekend at Grissom.

Now, Hatch said, he’s glad the reunion of the 15th Medical Battalion has finally made it’s way to Kokomo so all the veterans could have a chance to fly in choppers that played an integral role during their service.

“This keeps the spirit alive of those members who lost their lives so we could live free,” he said.

Richard Medlock, 72, of Georgia, said it was exciting to be around the helicopters for the first time since he served in Vietnam in 1970s, but he didn’t have any desire to get back into one.

Medlock served in the battalion as a radio telephone operator, communicating with the helicopters from the ground before they landed in camp. The time he did ride in a Huey, they came under attach and a bullet nearly struck Medlock.

“Yeah, I wasn’t too excited about getting back in a helicopter,” he said. “They’ve been trying and trying to get me back on the bird, but I have no desire to. Plus, I told my wife I promised I’d stay on the ground.”

But for pilot and gunner Walsh, dealing with enemy fire while making runs to pick up injured soldiers just came with the territory. He said that on one mission, when they were attacked, they landed back at camp to find 93 bullet holes in the chopper.

Hatch said that what really set the 15th Medical Battalion apart, though, was the 98.5% survival rate they had for all the people they picked up on the battlefield. He said that’s one of the highest of any medical unit that served in the war.

“We had a phenomenal success rate” Hatch said. “It’s unbelievable.”

Walsh credited their success to the fact that every medivac chopper had a tight-knit crew that knew how to work together to complete the mission.

“It had to be that way, because each one of us depended on each other,” he said. “But you didn’t think about that. Your main function was to get the aircraft airborne and get the guys back to the med station to get them treated.”

Throughout the afternoon, veterans and their families hopped on board one of the restored Huey helicopters stationed at the museum. Many walked away with smiles or tears in their eyes.

Walsh said it was amazing to be around the Hueys, but what’s even more special is seeing the men who served on the aircrafts during the group’s annual reunion in Kokomo, where the veterans stayed from Thursday to Sunday.

“We’re a pretty close-knit bunch,” he said. “The reason I come to these is to see these guys, because we’re not guaranteed tomorrow. I want to cherish what time I do have and see these guys.”

Radio operator Medlock said for him, the reunion has been a great way for his wife to learn about his experiences in Vietnam. The two are celebrating their 50th wedding anniversary this year.

“From coming to these, she’s learned the reason of why I am the way I am,” he said.

Medlock said the reunions give him a chance to not only swap war stories, but also remember the comrades they lost and the lives they saved during their service.

“We didn’t just serve the U.S. forces,” he said. “We served our allies and sick or injured civilians. We even served the enemy sometimes. We looked after everyone who needed us, no matter what side they were on. As it says on our banner, we did this so others may live.”

Walsh said that experience has created a deeply felt connection among all the men who served in 15th Medical Battalion, and the annual reunion is their way to keep that connection alive.