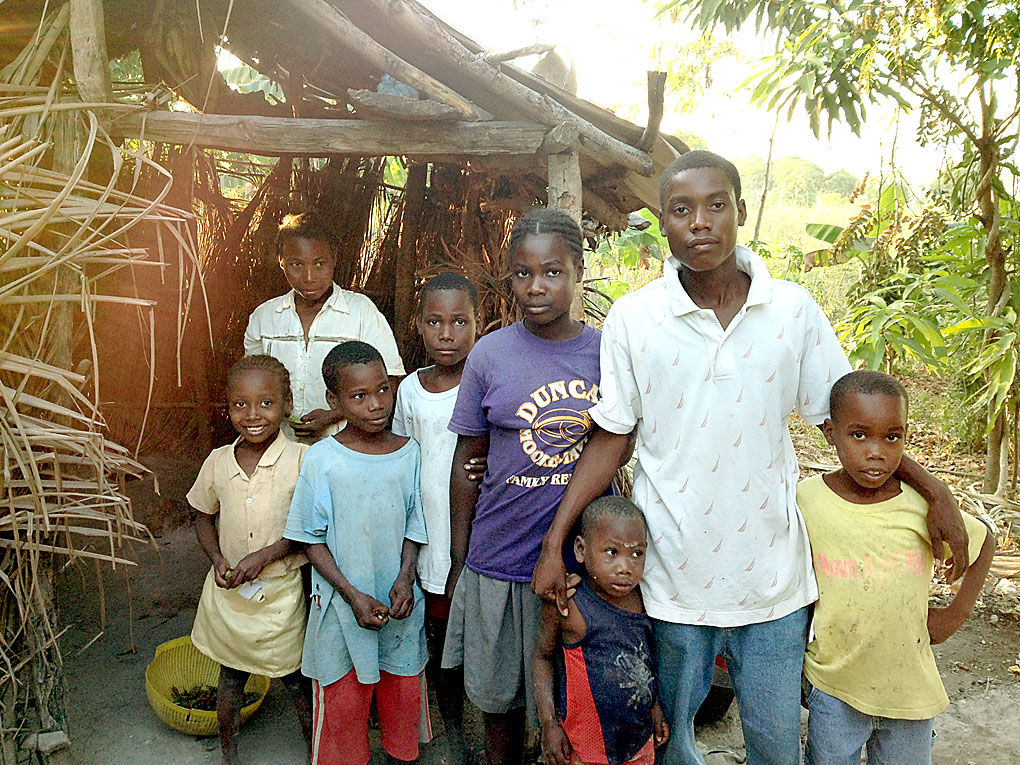 FACES OF THE FUTURE: Haitian children like these have suffered immense trauma from natural disasters like the 7.0-magnitude earthquake which struck in 2010. 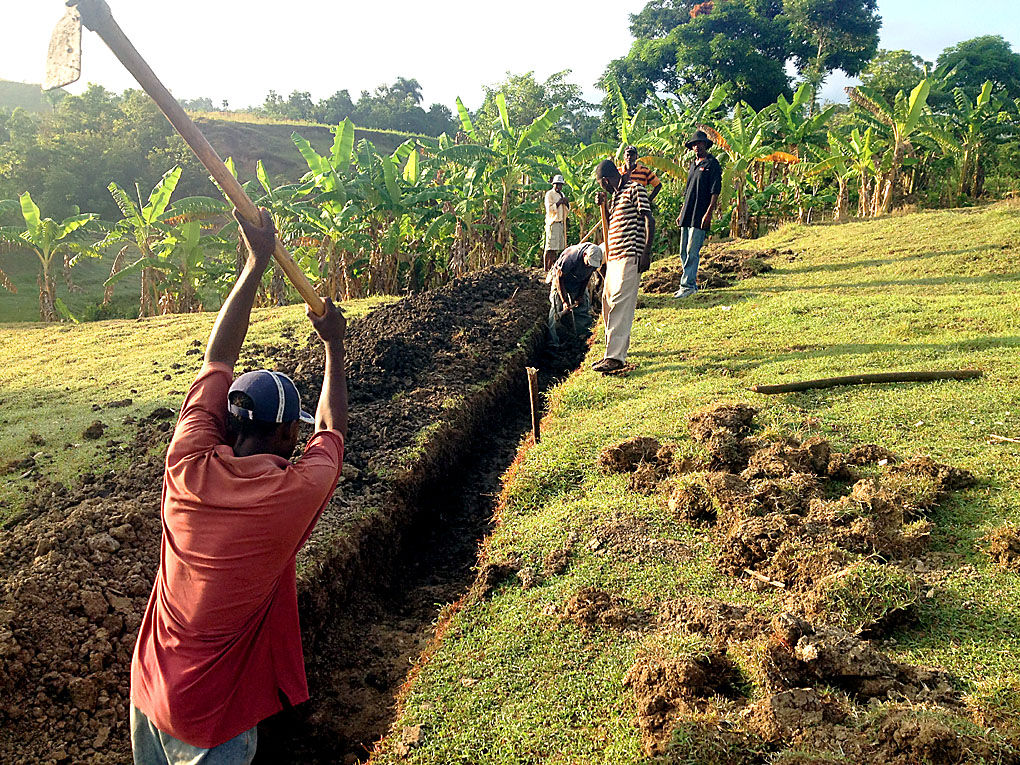 BUILDING: Curtis Stout said the construction of this school will provide an important link to education in Haiti, where nearly half of the children there do not attend school.

FACES OF THE FUTURE: Haitian children like these have suffered immense trauma from natural disasters like the 7.0-magnitude earthquake which struck in 2010.

BUILDING: Curtis Stout said the construction of this school will provide an important link to education in Haiti, where nearly half of the children there do not attend school.

Twenty-seven-year-old Curtis Stout is building a school in Haiti to help the children left behind by a broken system.

The Kokomo man said God has been calling him to this mission for a long time.

He went on his first mission trip to the country as a sophomore at Indiana University.

Stout spent a week there. It changed his life.

“God just broke my heart for the children of Haiti,” he said. “My heart told me to drop out of college and move there.”

But he kept himself from making such a hasty decision. He earned his college degree and eventually accepted an internship in California.

Stout couldn’t get Haiti off his mind, though. He had to get back there.

He moved back to Kokomo and spent some time raising money and selling off some of his belongings. The plan was to use that money to move to Haiti for as long as he could.

Stout boarded a plane bound for Haiti on Jan. 1, 2010. He started his new life in a town just outside of Port Au Prince 11 days before a massive earthquake destroyed the city.

“It was chaos afterward,” Stout said. “I saw death. I saw devastation. The earthquake changed Haiti. It changed my story in profound ways.”

The day after the quake, Stout traveled to Port-au-Prince with a man named Arthur to look for a woman who worked with them.

They found out she had been inside a university building when the earthquake hit.

The building had crumbled to half its size, Stout wrote in a blog that reflected on the natural disaster.

The woman they were looking for died before they reached her. Her body was crushed between the ceiling and the floor of the classroom.

Stout and Arthur climbed inside the classroom to see if they could help. When they did, they saw the bodies of four other people who didn’t make it out in time, Stout wrote.

The pair tried to pull their friend out of the rubble — but without heavy machinery to help them, there was nothing they could do.

“I began to question why I was in Haiti,” Stout wrote in the blog. “Why did God bring me here for such a time as this? What can I do amidst the broken humanity that was rushing in from all angles? I’m just a guy that loves soccer and spending time with kids. What can I possibly do in this situation to help anybody?”

Stout said God had answers for him even if he didn’t know it at the time.

Two days after the quake, Arthur asked Stout to travel to the nearby village of Coupon to cheer up some of the kids there.

He organized a soccer game there, and about 30 children showed up.

“I saw the kids walking in,” he said. “They looked downtrodden and depressed.”

But for the two hours they kicked a soccer ball around, the kids were happy and joyful again.

For the next three months while schools were closed, Stout played soccer with the children on a regular basis.

Stout said he felt connected to the kids on the soccer field.

Stout said that was the real beginning of his story in Haiti.

By April, schools reopened, and many of the children returned to classes. More than a dozen of the kids Stout had been working with, though, were left behind for various reasons.

He set out on a mission to help them find a school to call home. But for at least one of them, that wouldn’t happen.

Stout took 14-year-old Blandy to a school to try to enroll him there.

The principal gave the boy a reading test to complete. Blandy just stared at the page. He couldn’t read a single word.

“The principal told me, ‘This boy can’t come to my school. He’s too far behind. There’s no hope for him,’” Stout said.

Blandy still hadn’t found a school in September 2010 when Stout returned to Kokomo for a year.

Stout didn’t forget about him, though. He was going to help that boy and all the Haitian children who are left behind by a broken system.

Stout said a staggering 40 percent of school-aged children in Haiti are not attending school.

Thirty percent of those who are in school will drop out by third grade, and 60 percent drop out by sixth grade.

Part of the problem is the cost of school.

The average family earns about $700 a year. And school costs about $130 a year per child.

Stout dreamed of an affordable school that accepts children of all ability levels.

And now that school is becoming a reality.

The mission of the organization is to build schools for kids in Haiti who have no where else to go.

Its vision for the future?

According to the website, “We see children attending school. We see EVERY child, no one is left behind. We see children in love with Jesus. We see jobs. We see hope. We see organized sports for every age group. We see the same opportunities for girls as we see for boys. We see a future that is bright. We see passionate students changing their families. We see leaders changing Haiti from the inside out. We see JUSTICE.”

But they have to start small. The first school there is underway.

Stout joined forces with a woman planning to open an orphanage in Haiti. Together they purchased more than five acres of land in the town of Locapa.

Haitians helped build a road to where the first school building will go.

It will have a cafeteria, kitchen, garage and guest house.

The school will operate out of the cafeteria for the first year and will only accept kindergarten and first-grade students. One grade level will be added each year after that, Stout said.

But all of this takes money. Stout is back in Kokomo trying to raise the $150,000 needed to finish the work.

On Sunday, Oakbrook hosted a concert to benefit Project 117 after an anonymous donor paid to bring Christian-artist Charlie Hall and his band to the church.

“We’re so excited to have this group,” said Joel Larison, who serves on the creative arts staff at the church. “It’s not only bringing a great Christian artist to our community — it’s helping the community in Haiti where these schools are being built.”

The church itself is also donating some money, and businesses have started partnering with Stout, too.

Main Street Cafe donates $1 for every pound of coffee it sells.

Eventually, he wants churches and schools to partner with him.

Students in local schools could benefit from interactions with Haitian students, he said.

Stout wants the Kokomo community to take ownership of this school.

He smiled talking about the project and how far it has come.

“It’s been a wild ride, a real adventure,” he said. “There are a lot of ups and downs.”

But he already knows he’s right where he’s supposed to be.

“I’m totally in my sweet spot,” he said with a smile. “I went to Haiti five times last year. I love it there.”

For more on this story and other local news, subscribe to The Kokomo Tribune eEdition, or our print edition.