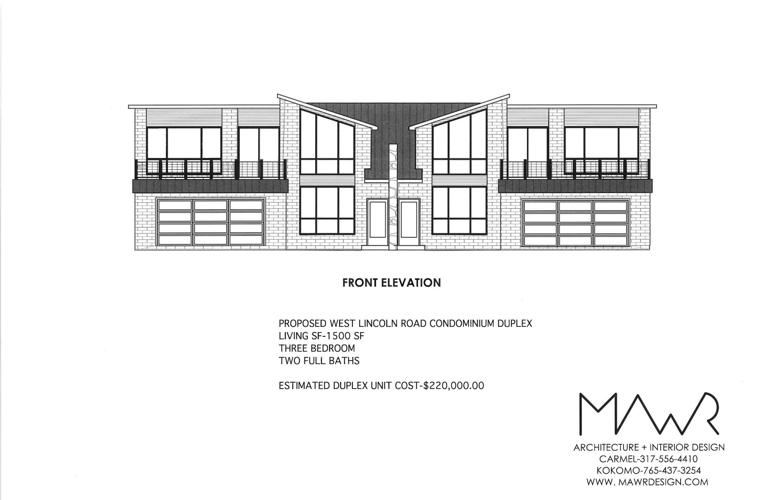 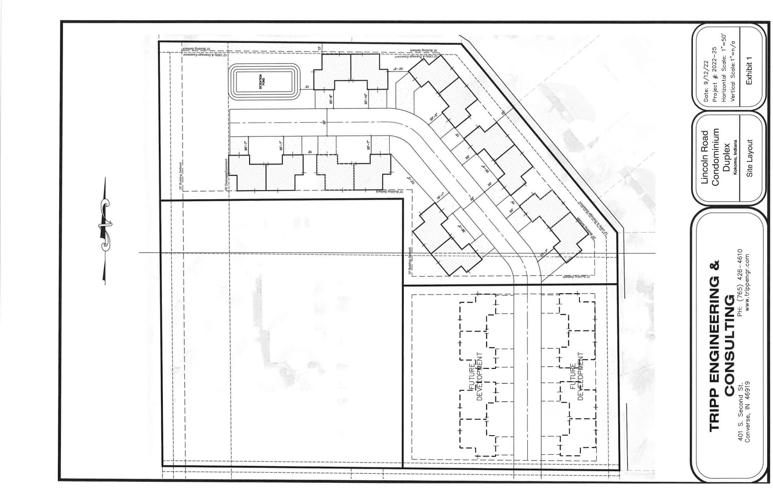 A developer is trying again to bring a multifamily housing development to the city’s southwest side just a a month after the Kokomo City Council struck down the original rezoning request.

The Kokomo Plan Commission voted 6-2 Tuesday to give a favorable recommendation to the City Council regarding a zoning request from office commercial to general multifamily residential for a more than 2-acre plot just east of Ladd Dental, 2333 W. Lincoln Road. Commission members Kelly Barker and Cathy Stover voted no.

The City Council voted down the request last time because of what it perceived as a lack of information about the proposed development and because of opposition from residents of the nearby Executive Place of Westbrook Homeowners Association. The petitioner made sure to provide more details Tuesday.

Plan Commission members were provided both a preliminary site layout and mock up of what the front of what is now being described as condominium duplexes. (In previous public meetings, the development was described as townhomes.) Representatives from the condo’s architect, Mawr Design, and others with vested interest in getting the rezoning through were on-hand Tuesday to answer questions from both the Plan Commission and the public.

The site layout shows seven two-story buildings, each with two units, and a detention pond on the north side of the property near Lincoln Road.

Tori Tripp, of Converse-based Tripp Engineering & Consulting and the engineer for the development, said seven buildings is the maximum units that can be fitted on the 2.27 acre lot. The condos would be 1,500 square feet, have three bedrooms and two baths and would be sold at an estimated price of $220,000 each.

She added that Zam Development plans on also purchasing the now empty land adjacent to 2.27 acre lot and south of Ladd Dental, but exactly what will be built there — whether its more condos or something else — has not yet been decided on.

If the rezoning is approved, the project will still have to go through the development plan process and approval, which may change the number of condos and other details.

Access to the housing development is expected to come from constructing a road to connect to the private road that’s currently in front of Ladd Dental and that runs adjacent to the nearby doctors’ offices, giving the condo owners access to both West Lincoln and South Dixon roads.

As happened last time, members of the nearby HOA Tuesday expressed concerns over the potential housing development, such as a loss of privacy due to the fact the condo owners would be able to see over into their backyard and the neighboring backyards and the density of the condos. The potential site layout presented Tuesday shows anywhere from a 13- to 25-foot setback from the back of the condo and the HOA fence line.

“One street with one row of houses would be wonderful — it fits in that area, but to try and put two sides with a road down the middle seems to me like a little overkill, ” Cindy Bunnell, a resident of the Executive Drive HOA, said.

Jennifer Newell, of Re/Max Realty and the realtor for the project, pushed back on the HOA’s concerns over privacy and loss of view.

“I’ve heard a lot from the homeowners about ‘I don’t want to lose my view,’ but when we buy homes, we don’t buy the view or the airspace,” Newell said. “Those things are not guaranteed for 40 years. Anything can be developed besides you, behind you or in front of you. I just want the homeowners to keep that in mind. These are not going to be anything ugly to look at.”