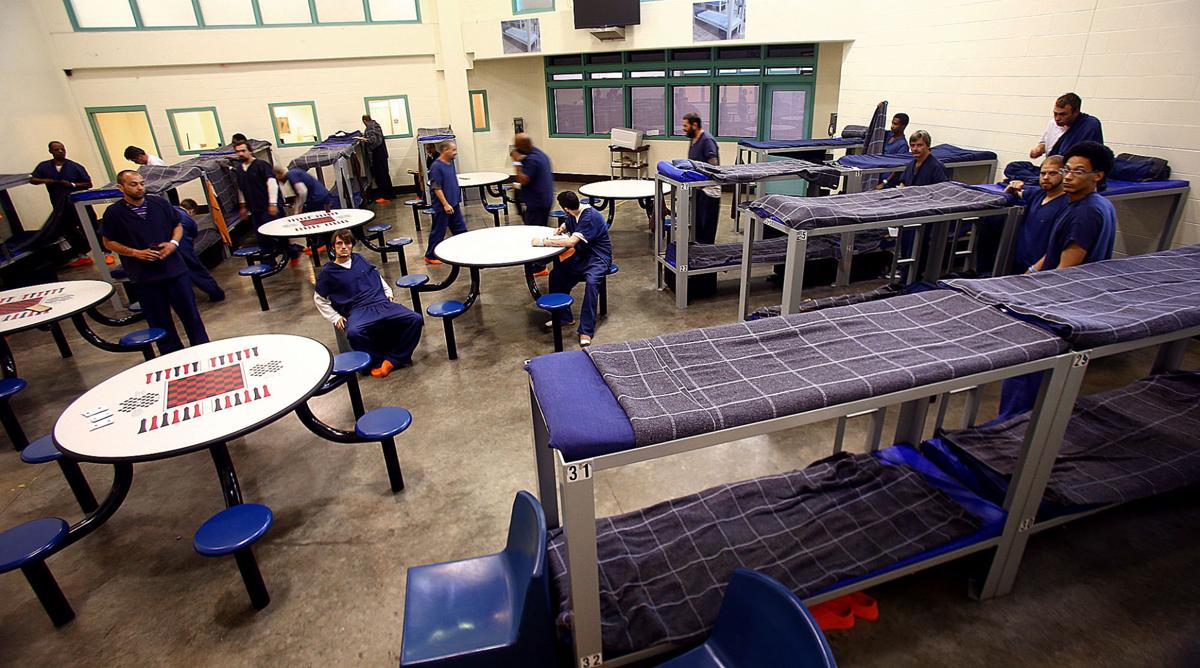 A dorm-style area was set up in 2012 to house the overflow of inmates at the Howard County Jail, as seen here in July 2016. Tim Bath | Kokomo Tribune 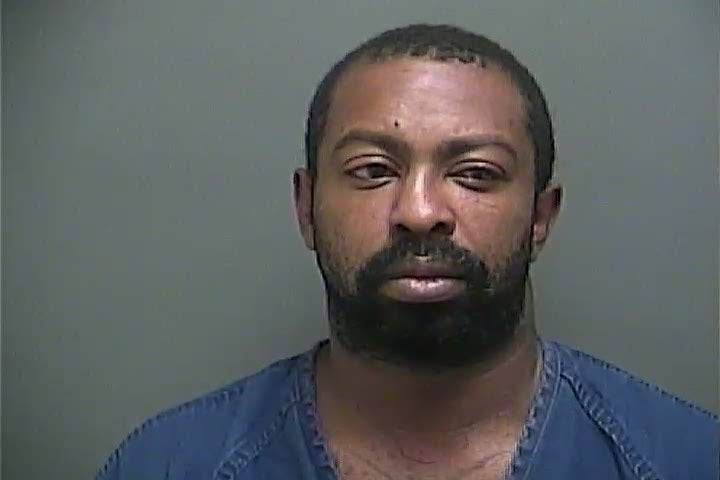 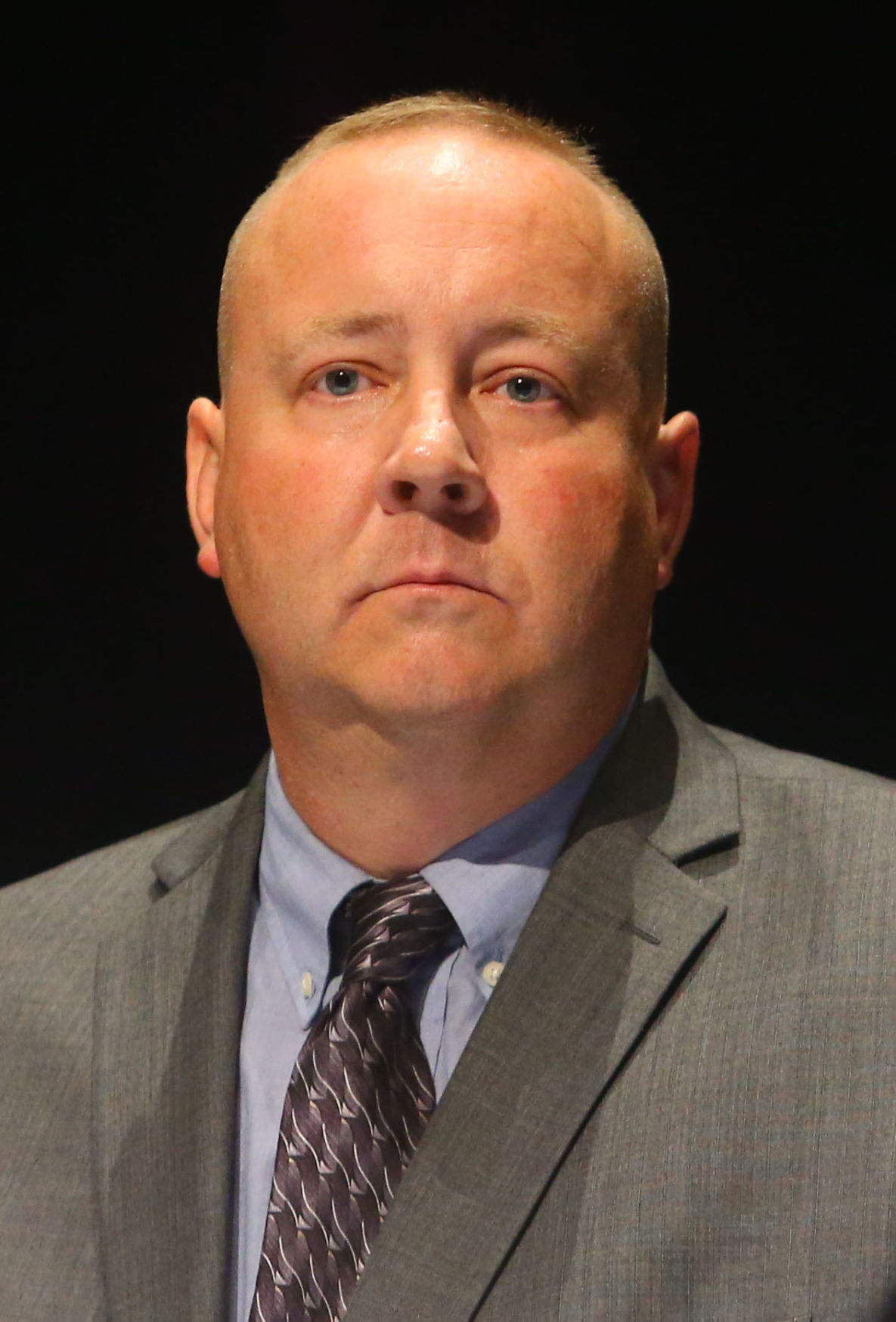 A dorm-style area was set up in 2012 to house the overflow of inmates at the Howard County Jail, as seen here in July 2016. Tim Bath | Kokomo Tribune

The family of a man who killed himself at the Howard County Jail more than two years ago is suing the sheriff’s department, alleging a culture of indifference to the suicidal risks facing local inmates.

It’s another troublesome chapter related to jail fatalities in Howard County and an associated trend highlighted in recent days by the year’s third inmate suicide and the hiring of a full-time mental health therapist meant to provide increased treatment for inmates inside the West Markland Avenue facility.

The lawsuit was filed in August in Howard Superior Court 4 by the family of James Brandon Patterson, who was found unconscious and later declared dead inside the Howard County Jail on Aug. 8, 2017.

The 38-year-old, said authorities, was found unconscious in a holding area during a security check while awaiting processing after being arrested by the Kokomo Police Department and transported to the jail on charges of domestic battery and strangulation.

Efforts by jail staff and medics to revive Patterson were unsuccessful, and he was pronounced dead at the scene. 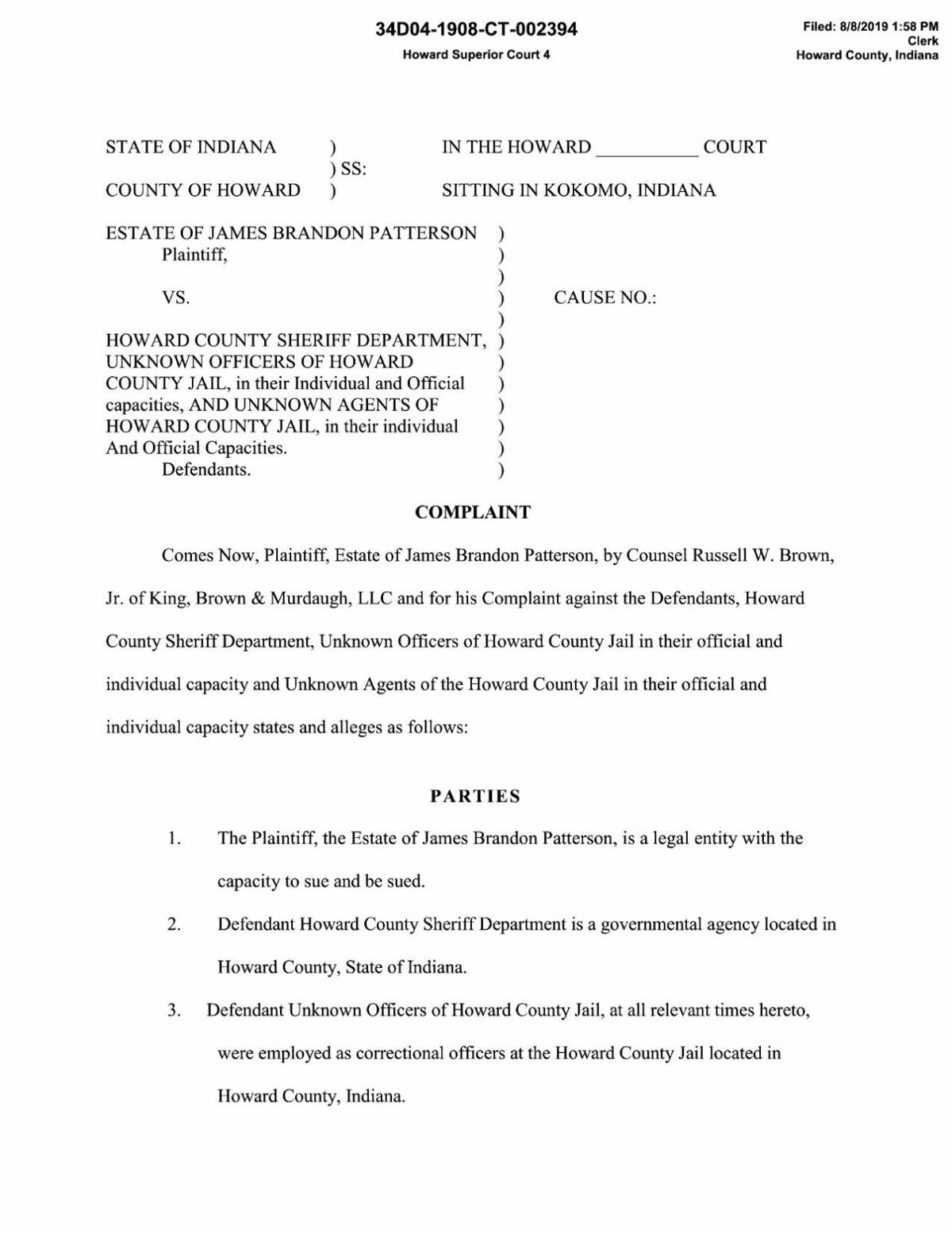 Howard County Coroner Steven Seele said an autopsy conducted by a forensic pathologist at Community Howard Regional Health determined the cause of death to be “asphyxia due to hanging with the manner of death being suicide.”

The lawsuit notes that upon his arrival at the jail – specific times are not provided – Patterson was placed in a holding cell. It alleges that while in custody at the jail Patterson “exhibited signs of mental instability and that he was suicidal” but was not evaluated by jail staff, referred to a mental health specialist or placed on any kind of special watch.

“Instead, Mr. Patterson was placed in a holding cell where he committed suicide,” reads the lawsuit.

In one serious claim, the lawsuit says: “The Howard County Jail had a regular practice and policy of permitting its correctional officers to disregard the fact that an inmate was suicidal.”

The lawsuit alleges the jail therefore violated Patterson’s Eighth Amendment rights to be free from cruel and unusual punishment and says the sheriff’s department “maintained a policy, custom, or practice of deliberate indifference to the serious medical needs of inmates at the Howard County Jail.”

The family, represented in the lawsuit as the Estate of James Brandon Patterson, has demanded a jury trial in the case and is seeking damages that will “fairly compensate” the estate.

Then-Sheriff Steve Rogers told the Tribune in previous comments that he hadn’t received any indication Patterson was acting out of the ordinary while being brought into the jail.

He also said Patterson, who left behind three children, had been booked in the past and “never given us any issues or reason for concern.”

The Indiana State Police were called following the suicide to conduct a death investigation. An email sent to the ISP on Thursday seeking information about the investigation and whether it has been concluded was not returned.

A request sent to the KPD for documents detailing the arrest and booking of Patterson on the day of his death was also not returned.

Russell Brown Jr., a Merrillville attorney representing Patterson’s family, said in an interview the allegations against the Howard County Jail and its treatment of inmates were motivated in part by a spate of suicides and self-harm experienced at the jail in recent years.

“There have been several suicides within the Howard County Jail, and the percentage of suicides compared to the population far exceed those of other similarly-situated institutions or county jails,” said Brown.

“Why does the Howard County Jail have a higher percentage of suicides based upon its population than other county jails? This isn’t the first suicide that they’ve encountered, so what have they done to try to protect their inmates?”

Brown did not provide specific figures, although the latest available statistics from the U.S. Department of Justice show that during a 10-year period from 2005-2014 there were a combined 195 deaths in all local jails in Indiana, or an average of 19.5 each year across the state.

Those figures cover all deaths, including suicides, which accounted for 31 percent of jail inmate deaths across America from 2000 to 2014, according to the BLS.

The numbers, however, represent the years before jails were saddled with overcrowding issues largely brought on by state legislation allowing the Indiana Department of Corrections to shift low-level felons and nonviolent offenders to county jails.

Those overcrowding concerns have been cited by Howard County officials in conjunction with the mental health struggles faced by inmates.

In 2019 alone, three inmates have killed themselves at the Howard County Jail, including two in March within days of each other.

Nearly two weeks later, on March 17, correctional officers also located Natasha R. King, 23, of Galveston, who was trying to strangle herself with a bed sheet inside of her cell.

She was transported to an area hospital, where she — like Casteel — later succumbed to her injuries.

And then there was the latest incident, which occurred this past week.

Last Tuesday, Sept. 17, Kacey Michael Roadruck, 30, of Kokomo, was located inside cell block 4B by correctional officers with a bed sheet wrapped tightly around his neck. He was transported to St. Vincent Kokomo and later flown to St. Vincent in Indianapolis.

The same year Patterson died at the Howard County Jail another person, 21-year-old Tavaris McGuire, died inside the St. Vincent Kokomo emergency room after an overdose in jail.

McGuire’s death, in February 2017, followed a traffic stop arrest and charges related to methamphetamine. An autopsy and toxicology report revealed McGuire had ingested drugs prior to being taken into custody by officers from the Kokomo Police Department, according to the Howard County coroner’s office.

McGuire’s family has since filed a lawsuit against Kokomo and Howard County law enforcement officials claiming he died “because the Defendants failed to obtain proper medical assistance while he was in ... custody.”

The lawsuit, now in federal court, specifically notes: “Kokomo is a city with a high incidence of methamphetamine abuse,” the lawsuit continues. “Neither the Kokomo City Police Department nor the Howard County Sheriff’s Department maintained adequate medical facilities to address instances of overdose.

“The Howard County Jail did not maintain or possess hospital facilities or other medical facilities sufficient with which to adequately treat Tavaris’ overdose.”

It goes on to say the defendants, including KPD officers and jail staff, were “deliberately indifferent” to the fact McGuire was overdosing, took too long to seek medical help and “failed to monitor Tavaris when he was overdosing.”

The Tribune sent a list of questions about Patterson’s death and the issue of suicides in the Howard County Jail to Sheriff Jerry Asher, who started in his role this year, and Jail Commander Robin Byers.

Asher responded by saying he could not discuss Patterson’s death because of the pending lawsuit and detailed the changes he believes will help the jail improve mental health conditions.

The most prominent of those actions includes the hiring of a full-time mental health professional, which Asher said “was an action to assist inmates at the jail for mental health assistance.”

Hiring a full-time mental health provider for the jail has long been a goal of Howard County officials and was referenced by Asher in March after the first of this year’s jail suicides.

“We always try to prevent such a thing, but it makes it difficult when we have 425 inmates at any given time,” he said. “ … To me, it’s an unfortunate part of having so many inmates, and society in general. This goes on a heck of a lot more than it should. It’s sad.”

Asher said the incidents also highlight the fact that jails in most counties across the state have become the largest mental-health facilities in their city or town.

The jail previously had a part-time mental health provider who worked about 20 hours a week.

The new, full-time therapist, Michael Prather, was introduced Monday to the Howard County Board of Commissioners.

Byers, who called the hiring “much-needed,” said Prather started Sept. 9 and worked his first week to get up “to speed with our policies and going over the policies and rewriting some of ours and procedures and going over everything.” Also evaluated was the jail’s suicide prevention program.

“As you guys know, we have been trying for a little while to bring on a full-time mental health therapist,” she said.

Byers later joked: “Last week was getting him in and not letting him back out.”

Lisa Scroggins, the owner of Quality Correctional Care, which employs Prather and is working with the jail to provide mental health care, described how the groups are approaching the problem of inmate suicides.

“To address the immediate concerns with suicide prevention, we are implementing a process to better identify individuals with the potential risk of harming themselves,” said Scroggins.

“This program also includes a monitoring system where an inmate identified with an elevated risk of self-harm, will be closely monitored by jail staff and receive daily assessment and evaluation by medical staff.”

The hiring was commended by Howard County Commissioner Paul Wyman, who has stood at the forefront of a local initiative meant to help residents struggling with substance abuse and mental health problems.

“For the last year-and-a-half or so we’ve been working a lot on this Systems of Care and Turning Point stuff and [Asher and Byers] have been at the table and talking about how can we even do more in the jail for people before they get out, and this is a great result of those conversations,” he said.

Howard County Commissioner Tyler Moore also credited the officials, saying jail staff has “been dealing with this for a lot longer than a couple years, the mental health issue, so I mean it’s great to have Michael on board.

“And obviously you’re probably already well (aware) of the daunting task ahead of you. So thank you for taking the bull by the horns and hopefully being able to ride it.”

What have they done?

Howard County Sheriff Jerry Asher said in an email sent to various media outlets Friday that the sheriff's department has since March taken or is planning multiple steps to better mental health conditions in the Howard County Jail.

-- Created signage "in each housing unit that has a 4 digit hotline number (at no cost) for the inmate to reach out to talk to a mental health advocate right away."

-- Adjusted procedures "for 'shift change officer pass on' to occur in the unit to create more officer–inmate contact."

-- Will start "implementing CIT (Crisis Intervention Team) training for all medical personnel and all correctional supervisors." He did not provide a timeline.

-- Added "additional training for both medical and correctional staff for suicide prevention and mental health issues."