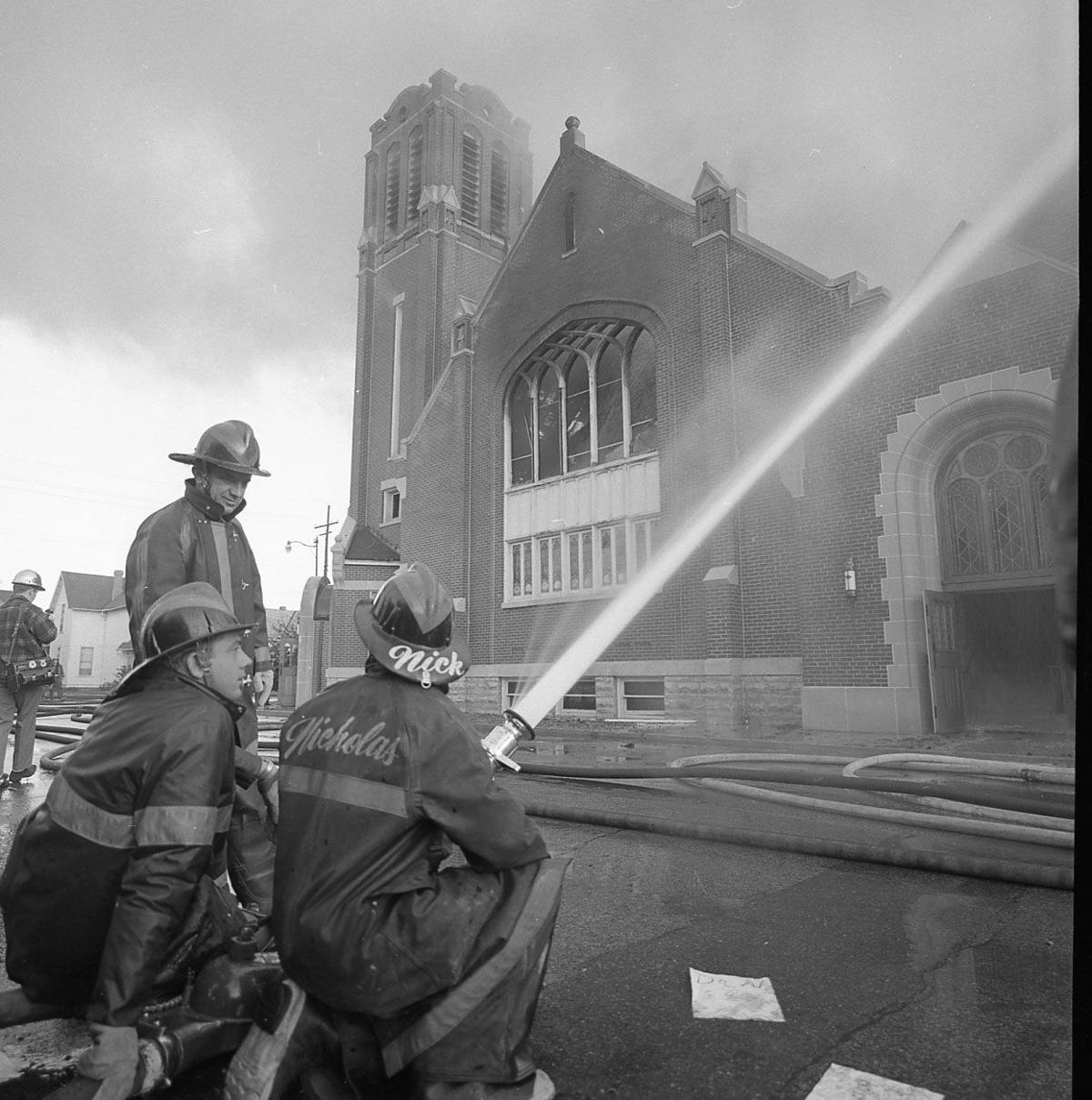 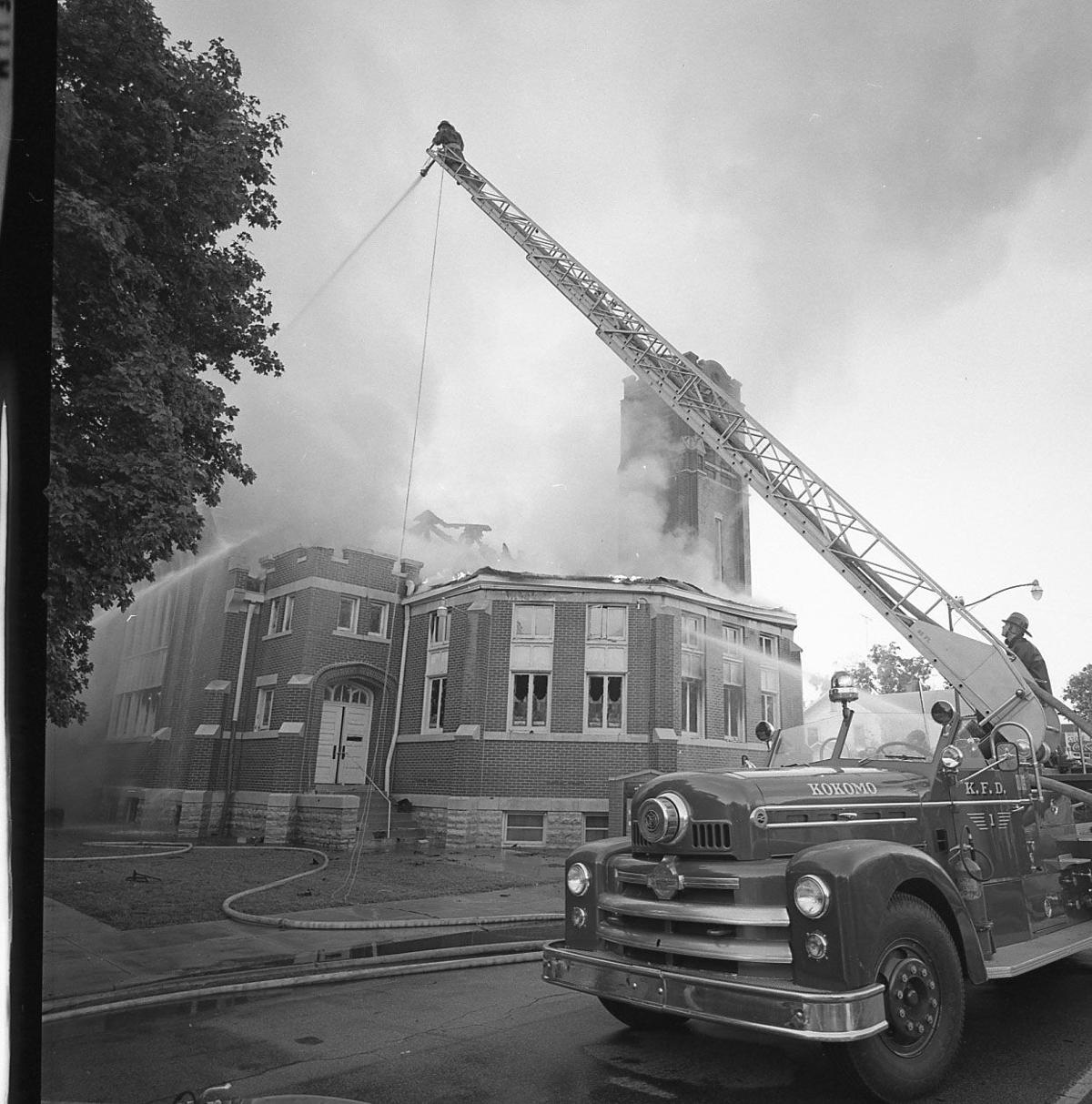 A “three-alarm fire” destroyed the sanctuary and the parish hall of the 1,600-member Main Street United Methodist Church on the morning of Aug. 28, 1968 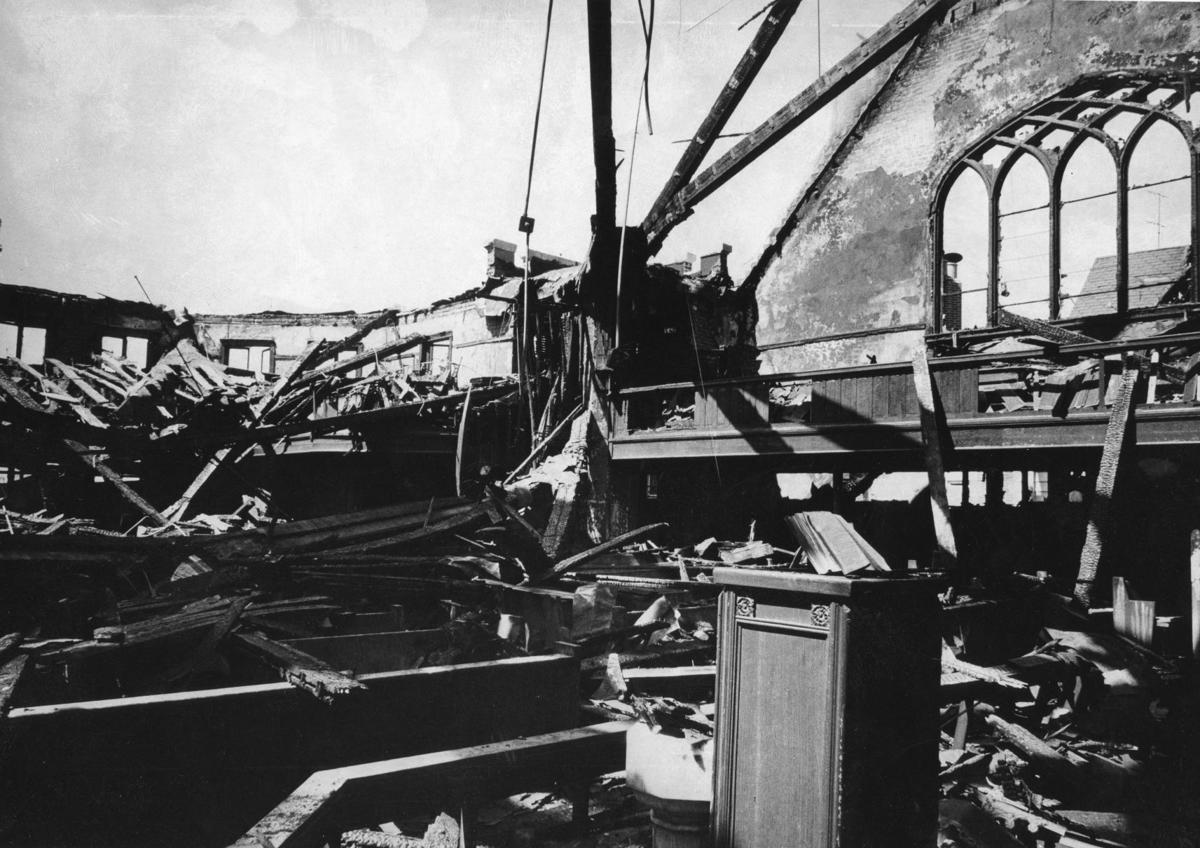 The sanctuary of Main Street United Methodist Church is pictured after a fire on Aug. 28, 1968. 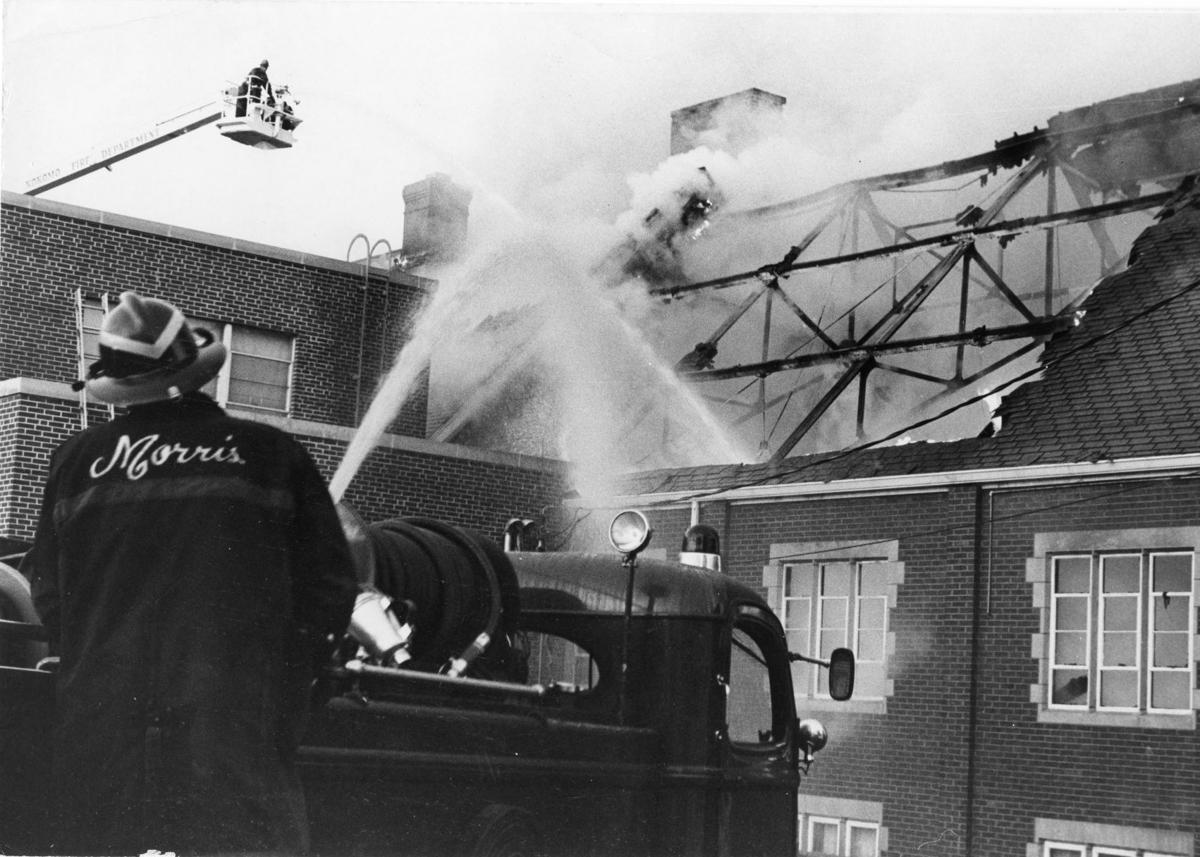 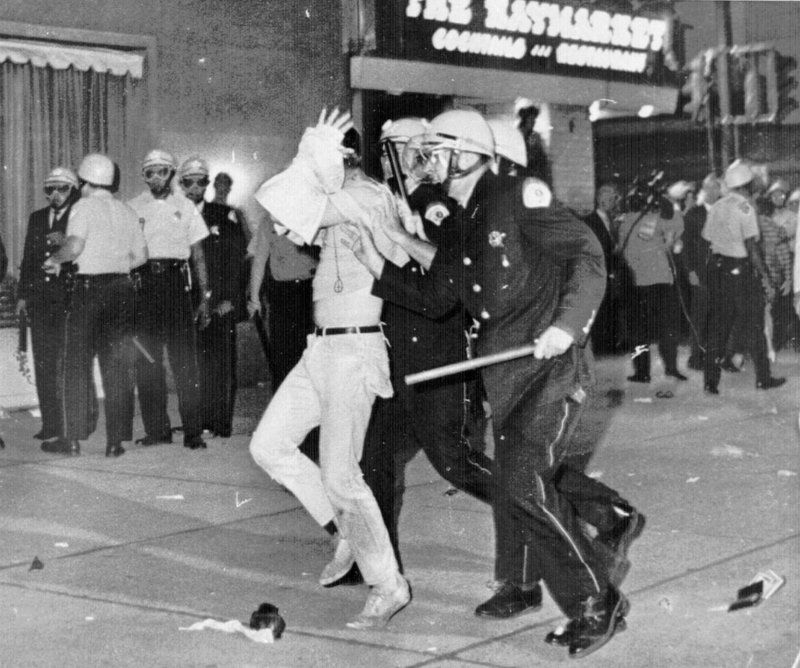 In this Aug. 28, 1968, file photo, a demonstrator with his hands on his head is led by Chicago Police down Michigan Avenue during a confrontation with police and National Guardsmen who battled demonstrators near the Conrad Hilton Hotel, headquarters for the Democratic National Convention. (AP Photo/File) 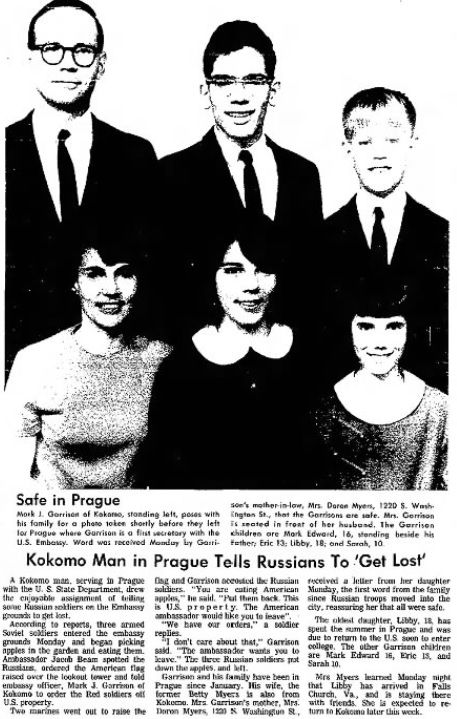 A “three-alarm fire” destroyed the sanctuary and the parish hall of the 1,600-member Main Street United Methodist Church on the morning of Aug. 28, 1968

This year, 2018, will undoubtedly go down as one of the most tumultuous in American history, marking a time of deep political battle-lines and uncompromising positions.

It’s been infuriating. It’s been divisive. And it’s been bizarre.

Outside of politics, it’s been more of the same.

But even 2018’s eccentricity is surpassed by this country’s most formative of years: 1968.

Much of America’s landscape has been built on what happened 50 years ago, from the civil rights movement and the assassinations that rocked a nation to political protests and the war in Vietnam.

While the third quarter of that year would prove less thunderous than the year’s other nine months, it was not a quiet time to be alive.

Here is a look at some of the most notable things to happen during 1968’s third quarter, and a bit beyond, in Kokomo and across the nation and globe.

A “three-alarm fire” destroyed the sanctuary and the parish hall of the 1,600-member Main Street United Methodist Church on the morning of Aug. 28, 1968, reported the Kokomo Tribune in an afternoon edition that same day.

The church, located at the corner of Harrison and Main streets, a spot it still calls home, put firemen to work for more than three hours before they could extinguish flames that broke out in the basement under the sanctuary, built in 1909.

Hundreds of people crowded into what was then called the Main-Markland District to watch the firefighting efforts, aghast as the classic church was eaten by flames. Damage would be estimated at $100,000 to $200,000.

The fire’s intensity would result in an explosion that shattered windows in the church office and bowed an inside wall of the office. Two firemen would be knocked to the floor and one, Omar England, would suffer burns on his neck and ears.

A special investigator for the Indiana state fire marshal’s office would later announce that the fire had been set intentionally by someone who ignited a flammable liquid on the floor of the basement under the church sanctuary.

But, noted Tribune reporter Ken Atwell, one positive piece of news emerged from the tragedy: Kokomo firemen made good use of their new snorkel unit to save an educational wing constructed five years earlier, in 1963.

After the assassination of Robert F. Kennedy, who had campaigned in Kokomo that April, Vice President Hubert H. Humphrey was left holding the mantle as the Democratic Party’s most likely presidential nominee (President Lyndon B. Johnson had already said he would not seek re-election).

But it was the Vietnam War, supported by Humphrey, that was on the mind of demonstrators in Chicago’s streets.

Hours after the afternoon vote, hundreds of demonstrators waged war with police on the streets of Chicago. “The whole world is watching,” the protesters chanted. Presidential campaign watcher Theodore H. White, surveying the carnage, wrote simply: “The Democrats are finished.”

An investigatory commission later described the scene as a “police riot.” The young demonstrators taunted the police, “Oink, oink,” and the police responded with swinging nightsticks and flying wedges.

Humphrey was nominated for the presidential race, but it was the hollowest of victories. The polls showed Republican Richard Nixon with a commanding lead. Humphrey himself observed: “I have pursued impossible dreams before, and maybe I am now.”

America’s Pastime – and a Kokomo connection

1968, the “Year of the Pitcher,” could be considered a bookend for Major League Baseball.

It would be the last season of the traditional two-league system, in which the National League and American League winners went directly from the regular season to the World Series.

And it would become known for a level of pitching that is now hard to comprehend.

Starting pitchers won both leagues’ MVP awards. The St. Louis Cardinals’ Bob Gibson would end the year with a record ERA of 1.12 and strike out 17 Detroit Tigers in game one of the World Series, on Oct. 2, 1968.

To make it easier on hitters, the Rules Committee chose after the season to shrink the strike zone and lower the height of the pitching mound, an effort to ease the burden on hitters.

In conjunction, each league is now broken into three divisions, and even wild-card teams make the playoffs.

But it would also be a time to celebrate baseball in Kokomo, even if many didn’t know it.

But Castle, unbeknownst to even the Tribune at the time, as his name doesn’t appear in any article in 1968, was born in Kokomo.

In total, Castle, who moved out of Kokomo as a small child, would only receive 14 MLB plate appearances, in 1973, culminating in four hits and two RBIs.

His career would mostly be defined by 11 years in minor league baseball, where he finished his career with West Haven Yankees in 1978.

But his cup of coffee will always stand tall within Kokomo’s extensive baseball history.

In late August 1968, the relatives of Mark J. Garrison, a Kokomo man serving with the U.S. Diplomatic Corps in Czechoslovakia, grew concerned.

They hadn’t heard from Garrison, a first secretary on the U.S. Embassy staff in Prague and a Kokomo High School graduate, since the Soviet Union had invaded the country earlier in the month, ending the political liberation known as the Prague Spring.

In Prague with Garrison were his wife and four children, and although the embassy was located in a former castle with walls 4-feet thick, it had been more than two weeks since a letter had been sent by the couple, explained a Tribune article published Aug. 24, 1968.

But, everyone would quickly learn, Garrison’s experience was more peculiar than dangerous.

A story published Aug. 27, 1968, after word had been received of the family’s safety, recounted Garrison’s “enjoyable assignment of telling some Russian soldiers on the Embassy grounds to get lost.”

The Tribune reported that three armed Soviet soldiers entered the embassy ground and began picking gardens in an apple, eating them in front of the U.S. ambassador and his staff.

Garrison was ordered to confront them.

“You are eating American apples,” he told the Russian soldiers. “Put them back. This is U.S. property.”

After a brief exchange the Russians took off, leaving the embassy and giving Garrison a slightly heroic, and largely comical, story to tell those back home.

The Year that Changed America: A look back on how Kokomo responded to the events of 1968

Editor's note: Throughout each quarter of 2018, the Tribune is taking a look back 50 years a…

Editor's note: Fifty years ago, the country was rocked by assassinations, wars, protests and…