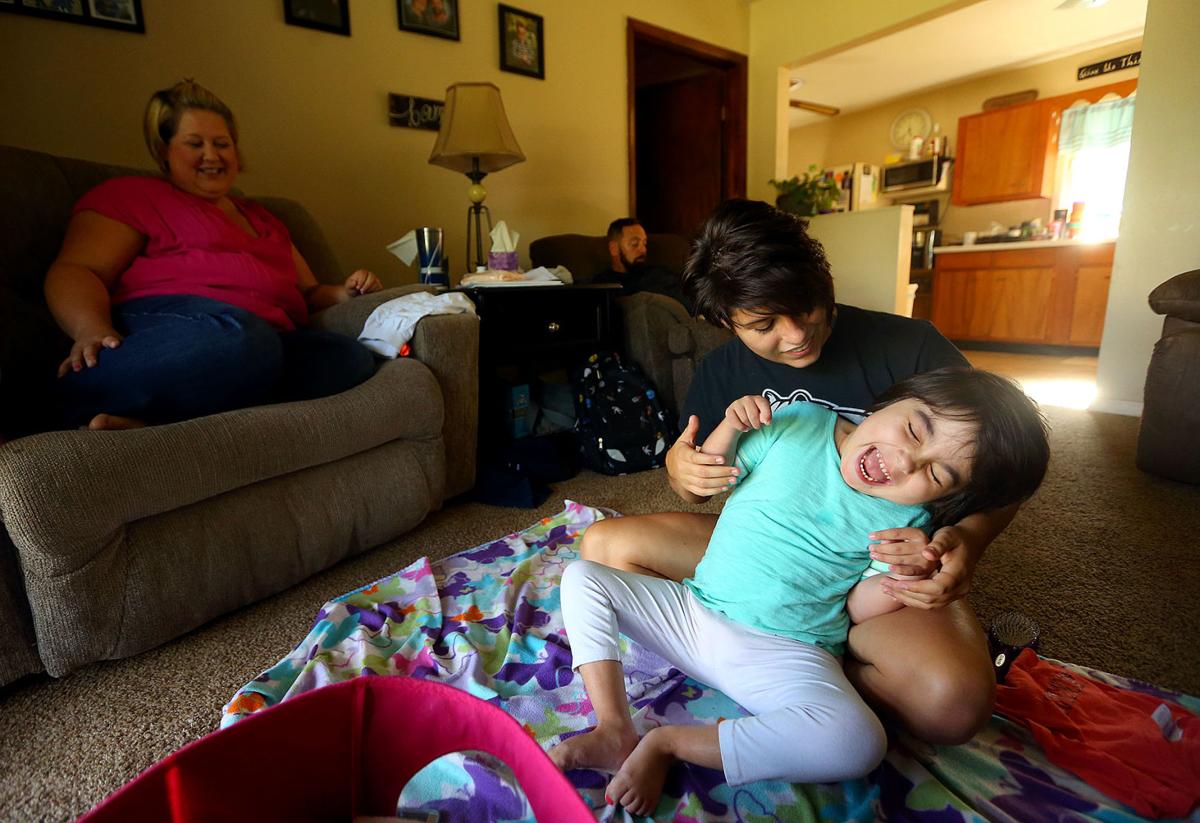 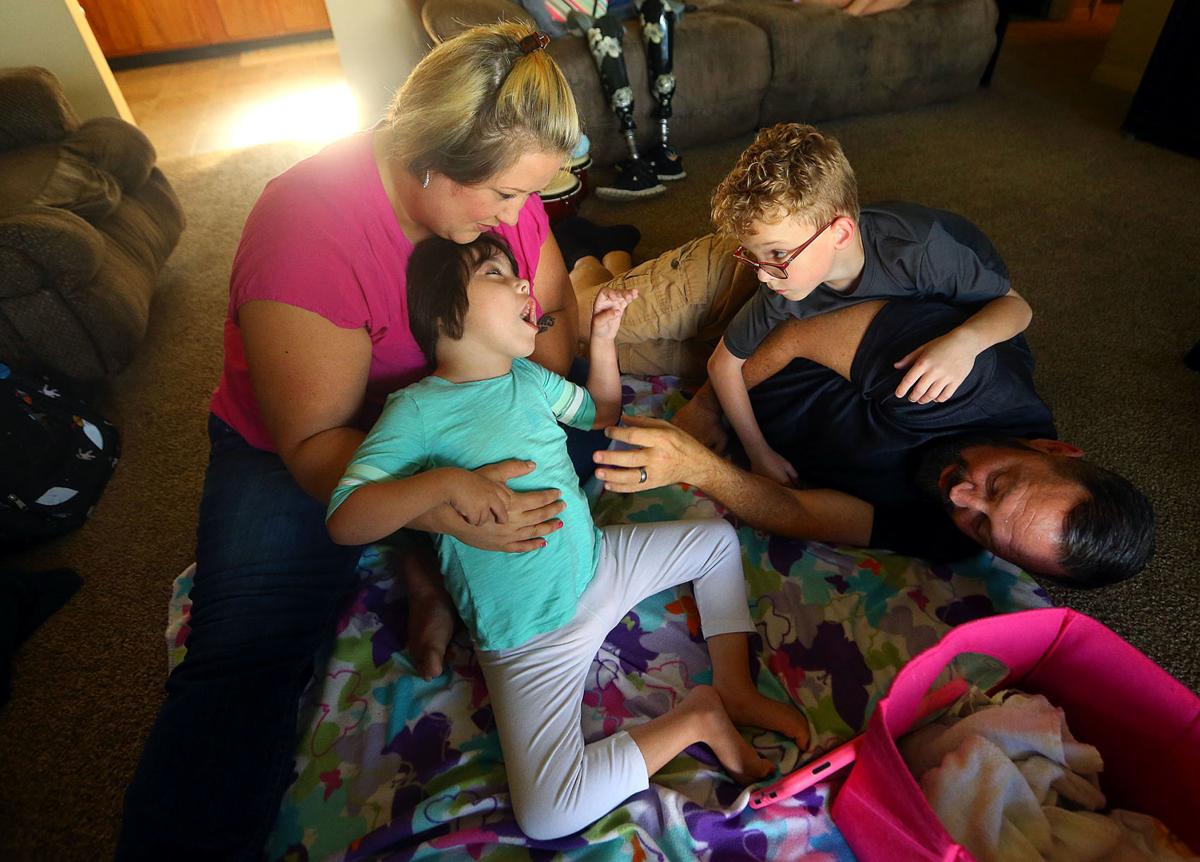 HANGING OUT AT HOME: Julie Satterfield, left, and Jerry Satterfield, right, hang out with their two adopted kids Hope, 4, and Thomas 8, at their home. Hope and Thomas both have cerebral palsy. 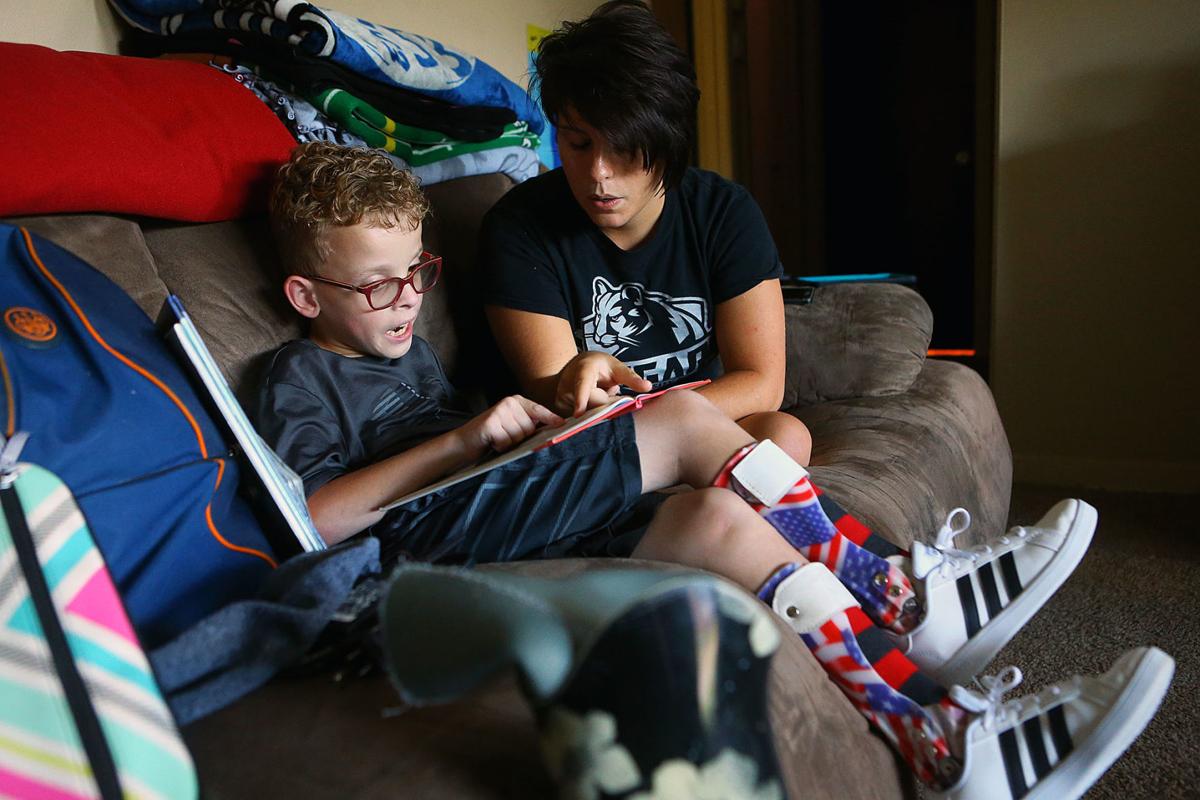 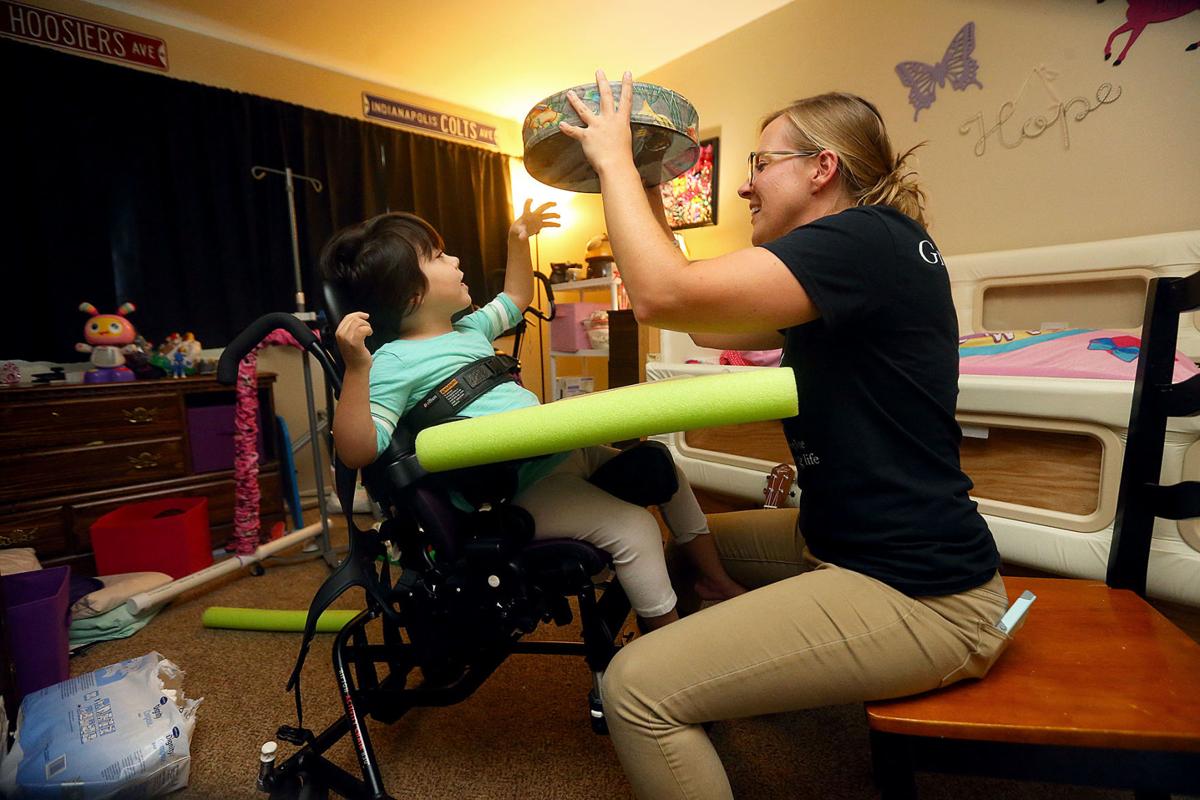 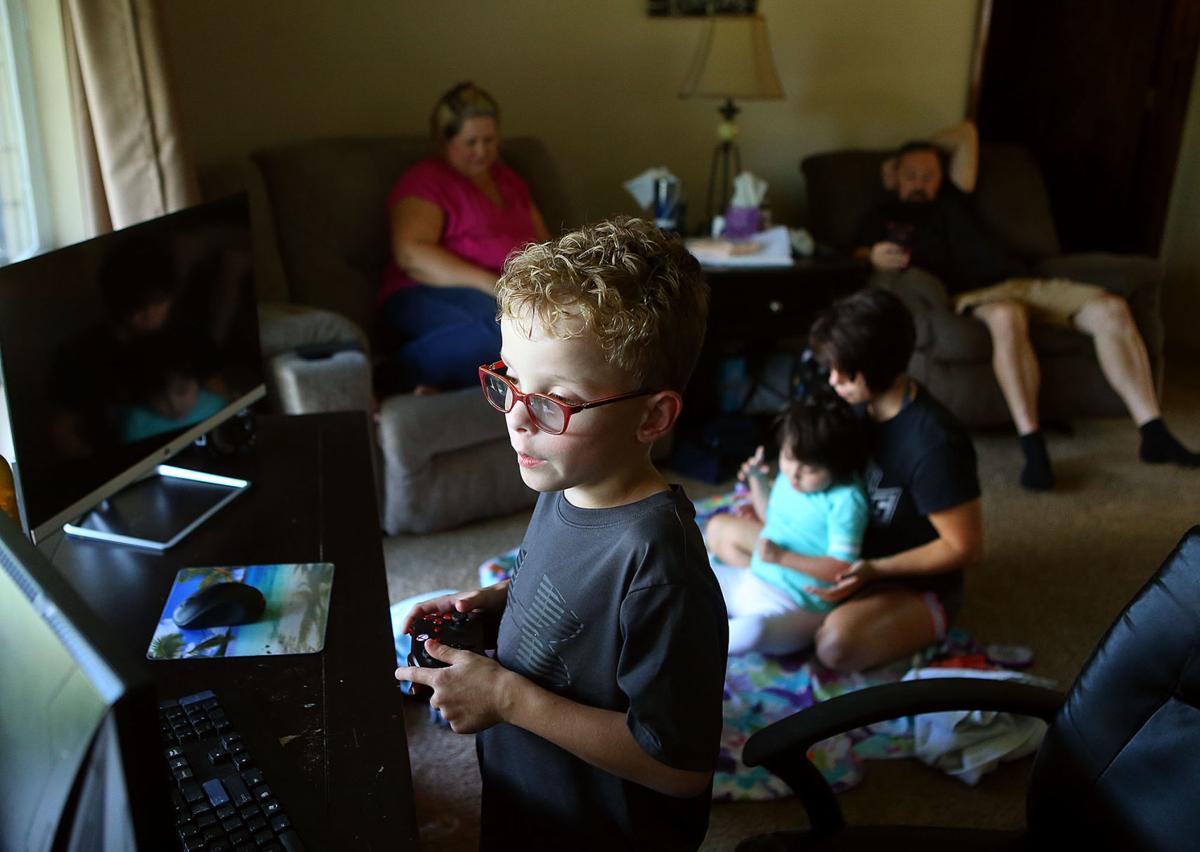 CRAFTING: Thomas Satterfield, 8, plays Minecraft as his family hangs out at home.

HANGING OUT AT HOME: Julie Satterfield, left, and Jerry Satterfield, right, hang out with their two adopted kids Hope, 4, and Thomas 8, at their home. Hope and Thomas both have cerebral palsy.

CRAFTING: Thomas Satterfield, 8, plays Minecraft as his family hangs out at home.

A ventilator is the only thing keeping Natasha Boling’s 6-year-old adopted son alive. The child sustained major trauma when he was just 2 months old, and now survives only because of the breathing machine.

Boling said if the trach tube hooked up to the machine comes loose or detached, her son has two minutes to live.

“That’s not an exaggeration,” she said. “The machine breathes for him. It’s life or death.”

Boling’s son is medically fragile and on life support, and his condition qualifies him through Medicaid to receive 18 hours of in-home nursing care every day. That includes an overnight shift to administer his medication and breathing treatments.

But since the Indianapolis special education teacher adopted her son over five years ago, not once has he had the full nursing coverage he is allowed, and the nursing staff that should be present at nearly all times to ensure her son is healthy and safe.

Boling isn’t alone. Nearly every family in Indiana who has adopted a medically fragile child is in the same situation.

That’s because the state is facing a massive shortage of in-home nurses that has forced home-health agencies across the state to ration their nursing staff and, in many cases, turn away families in desperate need of home care.

Leslie Deitchman, president of Tendercare Home Health Services, which is the largest in-home nursing agency in the state serving the Indianapolis area, said right now her agency has 100 referrals for medical care that they can’t meet. She said the agency would need 50 more full-time nurses just to meet the hours that have already been approved and paid for by Medicaid.

“It’s a huge problem that’s been pretty devastating for a lot of families,” Deitchman said.

It’s the same story at Riley Hospital for Children in Indianapolis. Dr. Ioana Cristea, the medical director of the hospital’s home ventilator program, said they discharge numerous children home every day with complex medical needs. Many of those children are only able to go home due to the availability of home nursing.

But within the past few years, it has become harder to obtain home nursing for patients, she said. More patients have to be placed in an institution, and more families who take their child home can’t hold down a job or lead a normal life because of a lack of in-home nursing care.

Cristea said in just two years, Riley was forced to discharge 25 patients on ventilators without any nursing care at home, even though all the patients qualified for home services through Medicaid.

Cristea said that lack of home nursing services has led to the deaths of several children over the past few years, and several caregivers have also been forced to place their children in long-term care facilities who should be getting in-home care surrounded by family.

“The families are suffering greatly due to a lack of available nursing,” Cristea wrote in a letter presented to Indiana lawmakers earlier this year. “It is not appropriate that a parent has to choose to place their child in a facility because they cannot afford to miss work and/or endure the stress of caring for a special needs child 24/7.”

It all begs the question: How did Indiana end up with a debilitating lack of in-home nurses for children? Like many problems, it boils down to money.

‘YOU CAN’T LIVE ON THIS’

Home-service agencies that provide nursing for children are reimbursed either through traditional Medicaid or Indiana’s Medicaid Waiver program, which provides funding for a variety of in-home services for individuals.

The Medicaid reimbursement rates are set by the Indiana Family and Social Services Administration and determine how much agencies get paid.

And those rates are embarrassingly low, according to Jo Nelson, owner and founder of Servant’s Heart Home Health Services, which has offices in Kokomo and Logansport.

Nelson said it’s nearly impossible to recruit qualified nurses to work at home care agencies because hospitals and nursing homes pay up to $15 an hour more than what she can pay through Medicaid reimbursement.

Many agencies have also stopped offering employee health insurance or benefits in order to keep their finances from falling in the red, she said.

“You’re looking for home-health aides who want to work with little pay and no benefits,” Nelson said. “Sounds like a great sales pitch, right?”

Tendercare’s Deitchman said the reimbursement rate allows her agency to pay licensed practical nurses about $18.50 an hour on average. That means home health agencies are competing not only with hospitals and nursing homes, but with companies such as Amazon and Target, which pay $15 to $20 per hour.

She said the paltry pay divvied out by Medicaid has led to more than 100 nurses leaving Tendercare to work somewhere else in the last three years, which equals about a quarter of the entire nursing staff at the agency.

“We’re losing nurses to places where they may not even want to work,” Deitchman said. “Every single agency, we’re all smaller than we were three years ago. It’s really sad.”

And despite more companies raising their minimum wage, the Medicaid reimbursement rates in Indiana haven’t moved an inch since 2016. From 2012 to today, the rates have only marginally increased, totaling a less than 1% increase a year.

“You can’t run a business when you only pay peanuts,” Nelson said. “You can’t live on it. If the government wants good home health, they need to pay the nurses what they’re worth, otherwise you might as well work at Taco Bell. It pays about the same.”

But there is hope on the horizon. Deitchman said after years of lobbying state officials, the State Budget Committee is set to vote on funding substantial rate increases to Indiana’s Medicaid Waiver reimbursement rates.

Medicaid Waiver programs help provide services to people who would otherwise be in an institution, nursing home, or hospital to receive long-term care in the community.

If the increase is approved, the payout for registered nurses would jump by 44%. Reimbursement for licensed practical nurses would increase by 55%.

However, the reimbursement rates for traditional Medicaid, which pays for the majority of hours for in-home nurses in Indiana, are currently under review and aren’t set for an increase any time soon.

Deitchman said it’s encouraging the waiver rates may go up, but all the Medicaid reimbursements need to increase to help solve the massive shortage of home-care services in Indiana.

“This is really about fighting for our patients,” she said. “It’s about these fragile kids and the parents who take them on thinking they will get some assistance. We’ve been fighting hard for these kids and families and our nurses who haven’t had a decent raise in years.”

THE NEED IS NOW

But as state officials weigh whether to approve increased reimbursement rate for nurses, families around the state continue to struggle to make ends meet as they raise their children without the help of the nursing care to which they should have access.

Julie Satterfield, a Kokomo woman who with her husband adopted two medically fragile kids who use feeding tubes, said she had been approved for 40 hours of in-home care for her children. But not once has she been able to use that care because there aren’t any nurses in the area.

Satterfield said she spent months calling different home-service agencies around Indiana, and not one had a nurse available to send.

“There’s no child care place in town to help kids with a feeding tube,” she said. “I’ve pretty much given up on finding a nurse.”

Without a qualified professional to watch the kids, Satterfield’s husband ended up quitting his job as the manager of the local IHOP so he could stay at home while she worked her shift at the Fiat Chrysler Automobile plant.

Now, the family is down to one salary, but still must pay for everything required to raise children with serious medical needs. That includes the enormous gasoline bill they rack up every month driving their children to Indianapolis in a handicap-accessible van for medical appointments.

Satterfield said if they could find a nurse, it would literally change their lives.

“It’d be great,” she said. “My husband could get a full-time job again. Right now, we’re living paycheck to paycheck.”

Boling, who adopted the 6-year-old who requires a ventilator, said she also has three other children she adopted who all have serious medical conditions.

Her oldest child is 11 and has microcephaly [a condition in which a baby’s head is significantly smaller than expected, often due to abnormal brain development], and a seizure disorder that keeps her in a wheelchair. Her daughter has been approved through Medicaid for a nurse to take her to school every day, but hasn’t had any medical help for three years because of the nursing shortage.

Boling said she manages to hold down a full-time job as a special education teacher in Indianapolis, but it only works because her husband quit his first-shift job and now works third-shift to watch the kids during the day.

Boling said that leaves her with the kids at night. When her son doesn’t have a nurse, she sleeps on the bedroom floor and wakes up four times to give him medication and do breathing treatments. Then she’s up a 5:30 a.m. and heading to work.

“A full night of sleep would be great, but I don’t get that,” Boling said. “I drink coffee. A lot of coffee. We’re both pretty sleep deprived. We’ve done this schedule for the last two years, but we can’t do it forever. It works for the kids, but not so much for us.”

Boling said she and her husband make it work despite only getting a tiny fraction of the nursing care they should. But for others, it doesn’t work.

She said she knows families who have fostered a medically fragile child, but decided they couldn’t adopt because they wouldn’t get any nursing help.

“The family loved their child, but they said, ‘We can’t go bankrupt or lose our house if we don’t have any guaranteed help,’” Boling said. “Families have decided to not adopt kids because they know the services aren’t there.”

The nursing shortage has also affected home care agencies, which have to decide which families get nursing and which don’t.

Tendercare’s Deitchman said they try to get a nurse into everyone’s home at least a couple of times a week just to check up, but hardly anyone is getting the full staffing that’s been approved by Medicaid.

“It sounds terrible, but the reality is we have to prioritize who gets the nurses, and that’s not easy,” she said.

“Our priorities are pretty screwed up in this country, and nothing says that more than the terrible reimbursement we’re getting from Medicaid,” she said.