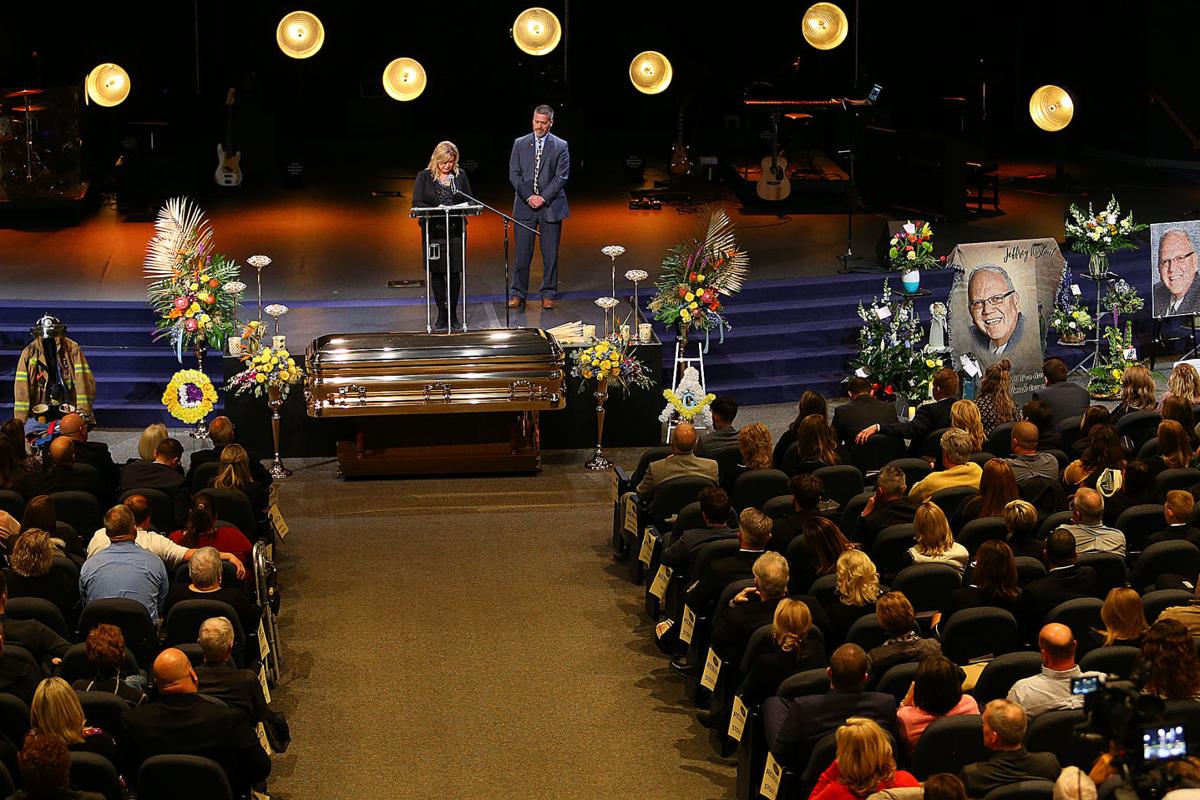 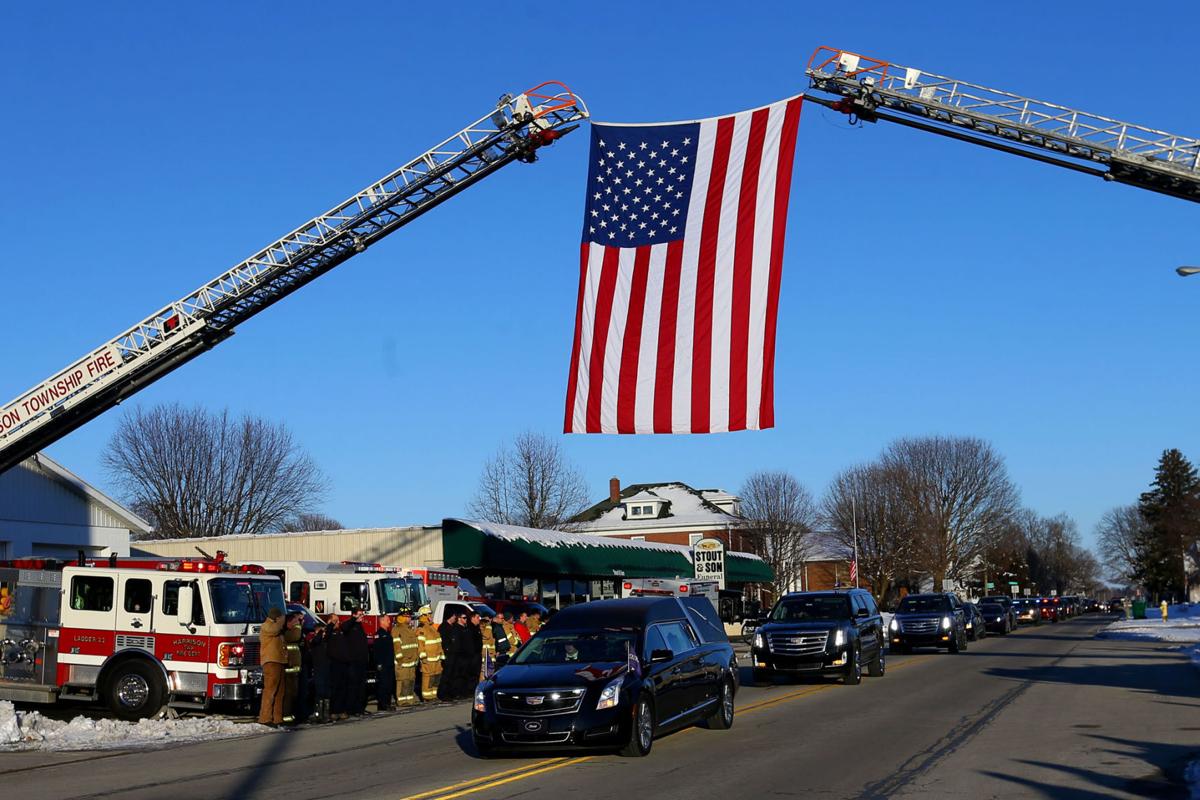 The procession for Jeff Stout drives through Russiaville, past Stout and Son Funeral Home and the Russiaville Fire Depatment on Friday.

The procession for Jeff Stout drives through Russiaville, past Stout and Son Funeral Home and the Russiaville Fire Depatment on Friday.

When pastor Jeff Harlow’s father-in-law died the day after Thanksgiving last year, the first person he told was Jeff Stout.

But he didn’t listen.

Stout, a man who gave all he had to give and a beloved community member, was laid to rest Friday at Crossroads Community Church. More than a dozen people spoke at the funeral and roughly 1,300 people attended.

“All of us here took a little out of Jeff,” Harlow said. “He gladly gave it to us.”

A graduate of Kokomo High School and Indiana College of Mortuary Science, Stout went into the funeral business alongside his grandfather before eventually partnering with several local funeral homes with the “goal to provide long term personal care to Howard County and the surrounding areas,” a biography on the Shirley & Stout funeral states.

Howard County Commissioner Paul Wyman had served the county with Stout and like those in attendance, cared for him deeply. During the evening Wyman presented the Stout family with a special honor on behalf of Indiana Governor Eric Holcomb.

Holcomb attended the visitation period on Thursday and asked Wyman to present the family with Stout’s Sagamore of the Wabash award, the highest honor the state of Indiana can give to any one of its citizens.

Tami Stout, Jeff’s wife, was grateful for the community’s outpouring of love during the past week before she spoke about her husband of six years and what it was like trying to bring two families together.

“I had two sons and Jeff had three daughters and two sons as well,” she said. “As we brought our families together, many began to call us the Stouty bunch.”

Wyman reminisced about all the service Jeff Stout has given to the community, all the lives he had touched and what it all meant to him.

“It was also more than a car accident to Jeff, it was human beings,” Wyman said. “It was somebody’s mother or father, somebody’s spouse, or perhaps, their son or daughter.”

Wyman touted Stout’s work when the community lost members in Iraq and Afghanistan .

“The hero’s welcome he provided from the moment their bodies arrived back in our community all the way through the funeral, showing the family the incredible honor, respect and dignity that they deserved – it was simply unmatched.”

Stout found himself filling many roles during his 55 years of life. He was the Howard County coroner and investigated over 700 deaths, a Russiaville firefighter and ambulance attendant and co-owner of Cone Palace, which he purchased with wife in January 2019.

As a lover of food, owning a restaurant seemed in the cards for Jeff Stout. At the service Friday, his good friend Brett Cain, said Jeff Stout would always was able to find humor and laughter in almost all things. Taking that lead, Cain wanted to do the same for his friend’s love of food and how “everything was better if it was made with cheese.”

Cain reminisced his friend’s love of bananas and, of course, Cokes from Cone Palace.

“Jeff taught us that Coke in a red-stemmed wine glass, on the rocks, was significantly better at an upscale restaurant compared to what the rest of us were actually drinking.” Cain said.

“JS was a life-changer. He was a doer like no other. The countless stories of how he impacted lives in some gentle and caring way are endless.”

Stout’s business partner and friend, Matt Grecu, knew him since 1992. Their friendship only grew over the years as Stout took Grecu under his wing and taught him things like the art of embalming.

“I got to see that this was a special man – that this all really meant something to him,” Grecu said. “It wasn’t about accolades, it was about service.

“Although the accolades came and rightfully so, he always wanted to do what he could to serve people.

Tami Stout said it was easy to fall in love with her husband, attributing his kindness and humor to all of the good times they spent together and how his love for life made her want to spend every minute with the man who was a comfort to so many.

“… when my son Tyler passed away, Jeff carried me through that difficult time …,” she said. “I can easily see why so many families who lost loved ones wanted Jeff by their side.”

Tami Stout said she knew how important serving the community was to her late husband and shared a hope she has for those he has impacted.

“I know he has helped and impacted many of you in this room,” she said. “We all have our favorite stories to tell about Jeff and my hope that in the days and years to come, we’ll all continue to share those stories to keep his memory alive.

“Each of us in this room will carry his spirit forward because to know him was to love him.”