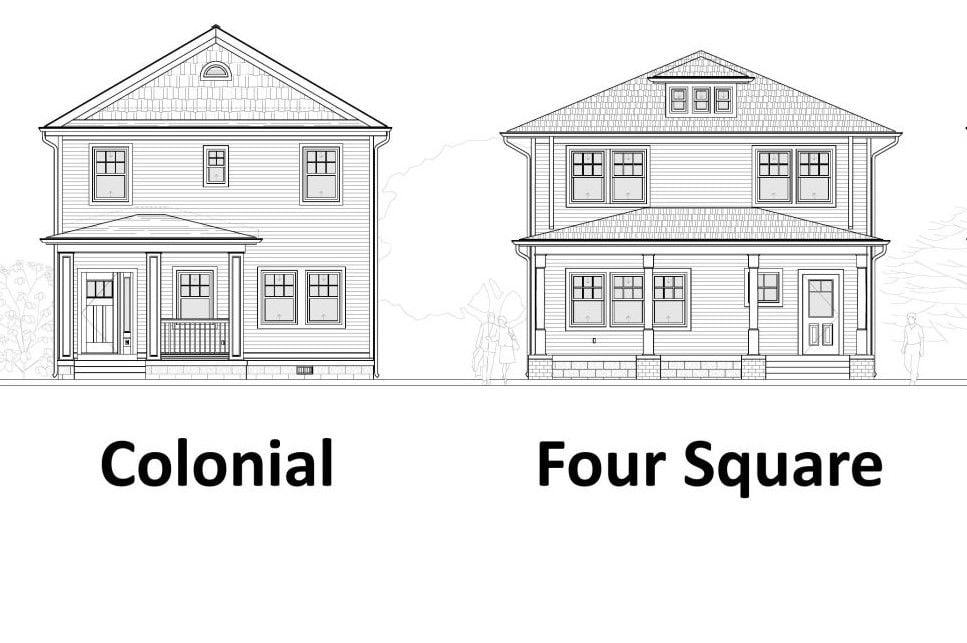 Pictured are various home designs that are utilized in the city's neighborhood urban infill program.

KOKOMO – City officials on Monday announced a program that will include the construction of new single-family, market-rate homes on vacant and underutilized lots in Kokomo neighborhoods.

The neighborhood urban infill program, as described in a city press release, will kick off this week when the Kokomo Community Development Corp. puts the first two homes, planned for the near west side on West Taylor and West Jefferson streets, out for bid.

The homes will be purchased from the Kokomo CDC.

Goodnight later discussed what he sees as missed opportunities in the city’s empty and underutilized lots.

“These places already have streets and sewers, and receive police and fire protection. Almost every empty lot in these areas is a wasted opportunity,” he said. “By building new homes in these neighborhoods we are increasing density, stabilizing or increasing existing property values, and enhancing the neighborhood appeal.”

Each home will, according to city officials, be designed with an open floor plan and be built with quality materials.

Notably, the homes will be sold on the open market, and funds collected from home sales will go back into the city program to finance the construction of additional homes.

Overall, the city and KCDC “worked with Indiana-based SRKM architecture to create five designs that meet the trends and desires of today’s homebuyers, while respecting the character of our neighborhoods,” according to Goodnight.

“These homes will be built in historically important and established neighborhoods.” said RACI Executive Vice President Amy Pate in the release.

“The demand for housing, and especially quality homes, is only growing. Kokomo is in need of new housing stock in the heart of the city. The Realtors of Central Indiana are thrilled to see this program in Kokomo.”

Echoing Pate’s comments was Steve DeLon, the president of the Home Builders Association of Howard County.

“The Home Builders Association loves to see innovative ideas, so we were pleased to be asked for input and to partner with the City of Kokomo and KCDC. There is no doubt that this program will have a lasting positive impact on Kokomo,” he said.

The city will primarily utilize properties obtained through tax sales and its Blight Elimination Program, according to Kokomo Deputy Mayor David Tharp.

Tharp explained city officials hope to “cluster multiple homes in a single bid,” or place their focus in a neighborhood-by-neighborhood sense instead of bouncing around the city, lot by lot.

“We want to make sure that the lots that we target are close to other lots that can be included in the program,” he said.

Tharp did not provide a specific number of homes the city hopes to build in coming years, instead saying the possible figure is dependent on “market variables.”

In June, Realtors Association of Central Indiana President Cherie Smith told the Tribune Howard County is considered to be a seller’s market due to a lack of housing inventory, meaning there are more buyers than sellers.

Smith attributed the housing market’s position to low interest rates and a strong economy that has seen housing prices jump back to where they were roughly a decade ago.

And while Smith hasn’t had an influx of clients moving to Kokomo from other communities, she highlighted the positive impact she believes the housing market has had locally.

“Absolutely it’s a good thing for the community,” said Smith. “If you’re looking at just the new construction, taking those vacant lots and building new homes, it builds morale in those neighborhoods, or even those subdivisions.

“It builds a tax base, and it allows the county to bring in more tax dollars, because you’re going from a vacant lot to a fully-built home.”

A government home-building program targeting vacant and underutilized lots was recently approved for an infusion of more than $1 million, and …