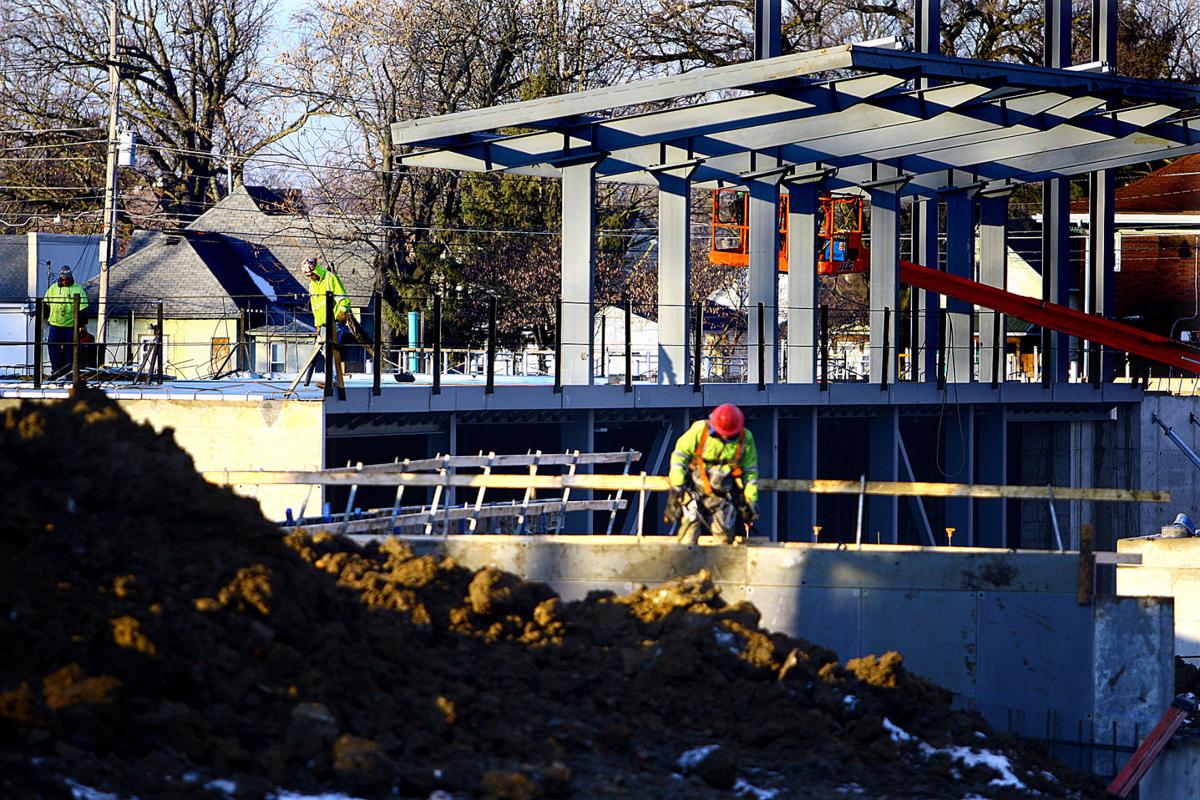 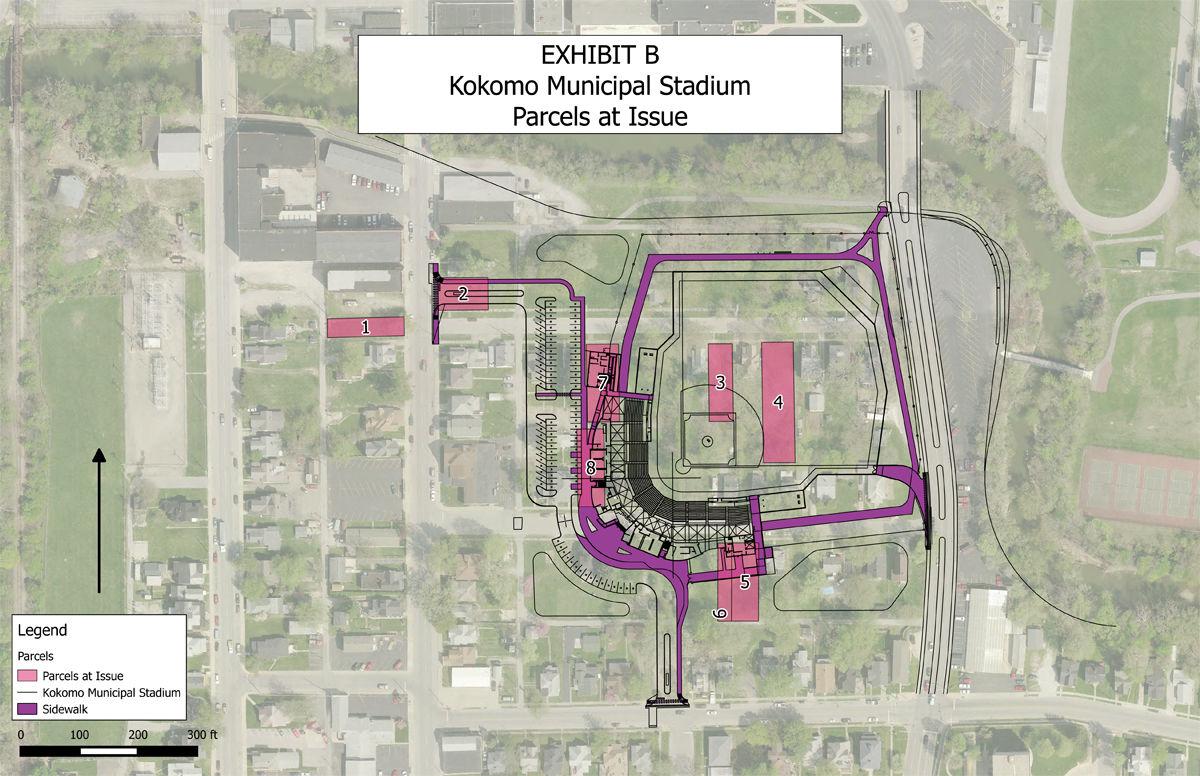 This image provided by Sen. Jim Buck shows the design of Kokomo's baseball stadium and the location of eight parcels of land with deed restrictions mandating they remain open space.

This image provided by Sen. Jim Buck shows the design of Kokomo's baseball stadium and the location of eight parcels of land with deed restrictions mandating they remain open space.

A successful third reading, which is scheduled for Thursday, is required before the bill can pass the Senate and be sent to the House of Representatives.

The bill, which would allow the Indiana Department of Homeland Security to issue a cease and desist order to stop work on Kokomo’s baseball stadium project, was originally scheduled to be heard by the Senate last Thursday.

However, due to the addition of Sen. Brandt Hershman, R-Buck Creek, as co-author, the bill’s reading was rescheduled.

The Federal Emergency Management Agency and the IDHS sent letters to Kokomo Mayor Greg Goodnight on Nov. 24 informing the city of construction violations on the baseball stadium project, which led in part to Buck’s bill.

In the letters, the two agencies informed Kokomo of violations on eight parcels of land, per deed restrictions put in place by the Hazard Mitigation Program.

FEMA has threatened to withdraw federal funding to the state if violations are not corrected within 60 days.

“FEMA is worried about excess flooding and the effects it could have on the area,” Buck said. “The stadium could have a negative effect on flood water and any debris that would be involved.”

Kokomo has until Jan. 27 to correct the violations, IDHS spokesman John Erickson said, and the city is currently not in compliance.

“We don’t necessarily have to do anything on that date, but it puts an end to the waiting period that we have put in place,” Erickson said.

In response to the letters, city officials submitted a corrective action plan, which has been reviewed by the IDHS and delivered to FEMA.

“We have passed the plans along,” Erickson said. “FEMA currently has them and they will issue their findings when they have come to a conclusion.”

In the plan, City Engineer Carey Stranahan addressed the eight parcels and proposed a variety of construction adjustments, including the elimination of a picnic area wall and the addition of steel columns.

Stranahan specifically discussed parcels 3 and 4, which Buck focused on when he presented a map of the parcels to the Environmental Affairs legislative committee on Jan. 12.

The two parcels, which are composed of the shortstop, second base and outfield positions, are currently in compliance, Stranahan said in the plan.

“The property will remain open space and will be used for outdoor recreation activities,” he said.

Stranahan’s comment was in response to requirements placed by the FEMA flood mitigation program, which state in the deed restrictions that the parcels “shall be used only for purposes compatible with open space, recreational or wetlands management practices; in general, such uses include parks for outdoor recreational activities, nature reserves, unimproved pervious parking lots and other uses.”

However, due to alterations the city made to the land, the parcels are not in compliance, said Erickson.

“They don’t constitute green space because the city brought in fill to elevate the land,” Erickson said. “According to the agreement they signed, they were not allowed to do that.”

Buck echoed Erickson’s statements, and said the city has made too many alterations to the land.

“There should be total compliance,” Buck said. “Some of those lots that FEMA funded now have fill, and you can’t fill them.”

The city was required to obtain approval before construction decisions were made, and they did not do that, said Erickson.

Stranahan went on in the corrective plans to discuss the use of artificial turf on the parcels, which he said is more resistant to flood damage than natural turf.

“Furthermore, FEMA has provided funding to at least one other stadium located in the flood plain that utilized artificial turf,” Stranahan said. “Wesley Barrow Stadium in New Orleans was reconstructed after Hurricane Katrina and utilized $2 million in FEMA funds.”

However, the violations of the eight parcels and flood mitigation are two separate issues, said Buck.

Stranahan also addressed parcel 2, which he said will become an unimproved pervious parking lot, and parcels 5 and 6, which he said includes a public restroom and a portion of a picnic area.

A public restroom is listed as an approved structure in the deed restrictions. However, changes have been made to the plans for the parcel.

“This structure has been redesigned to be a slab on steel deck building with steel columns and beams to support the floor,” Stranahan wrote. "This will open the space under the picnic area to allow flood waters to enter as needed."

Steel or concrete beams will be added to parcel 7 and also will replace an exterior wall in parcel 8, according to the plan.

City officials declined to comment on the corrective plans, ongoing construction on the stadium and the proposed legislation.

George Myers can be reached at 765-993-4724, by email at george.myers@kokomotribune.com or on Twitter @gpmyerskt.

Construction on Kokomo’s new ballpark near downtown may be in jeopardy, according to a Chann…

State Sen. Jim Buck’s, R-Kokomo, ‘cease and desist’ bill passed the third reading on the floor of the Indiana Senate today with a 41-8 vote.

State Sen. Jim Buck’s, R-Kokomo, "cease and desist" bill passed the third reading on the floor of the Indiana Senate today with a 41-8 vote.

The Federal Emergency Management Agency rejected the city’s proposal to modify its baseball stadium plans in a letter Thursday, and the agency…

State Sen. Jim Buck’s "cease and desist" bill was referred to the House of Representatives’ Natural Resources Committee today during the bill’…

The year in review: January and February

Editor's note: Leading up to New Year's Eve, the Tribune will look back at those stories that grabbed local headlines this year. Today we reme…

This week, State Sen. Jim Buck’s, R-Kokomo, "cease and desist" bill made a significant amount of progress by passing both its second and third…